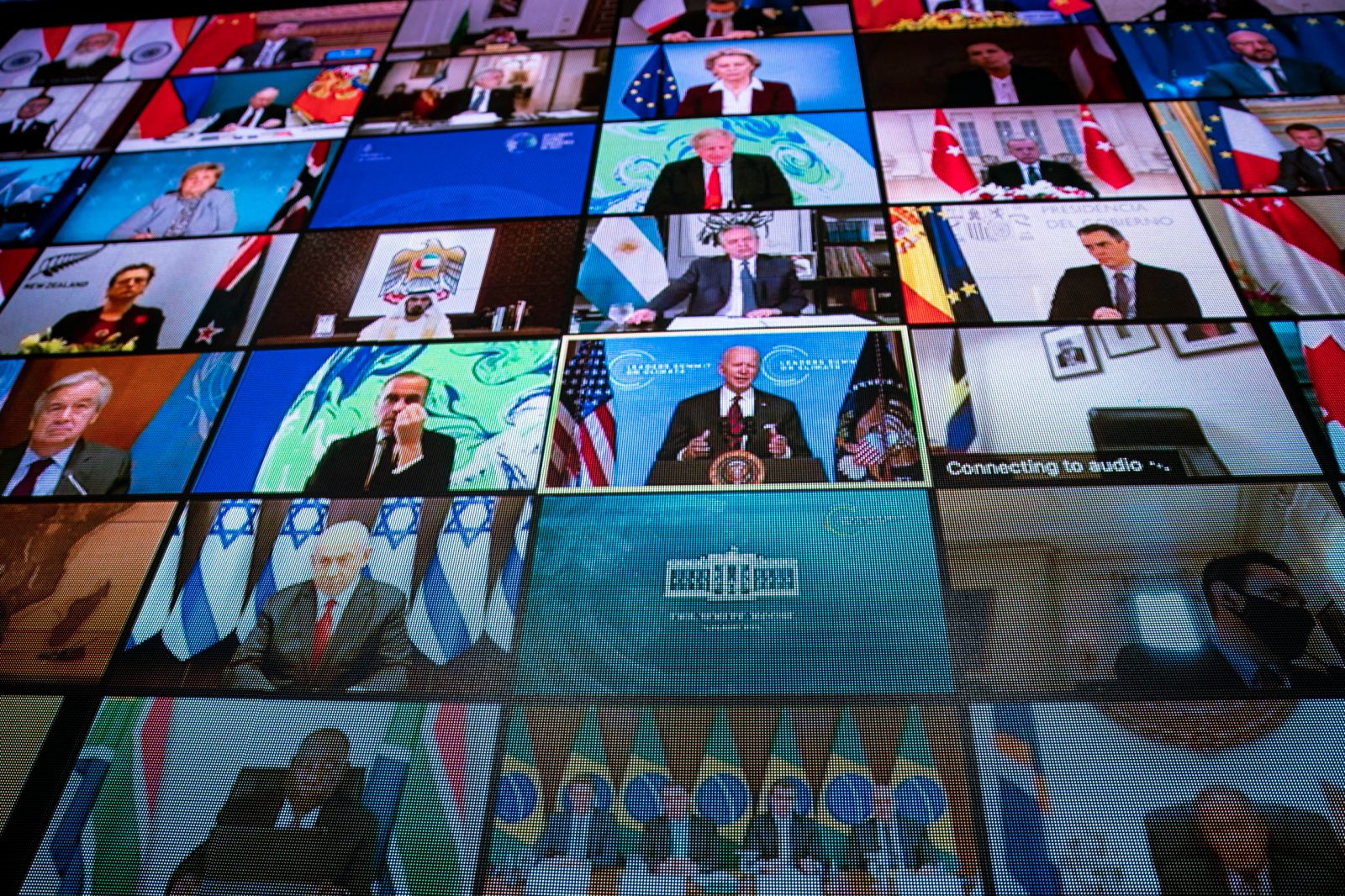 A video monitor shows President Joe Biden speaking during a virtual international Leaders Summit on Climate, in the East Room of the White House, in Washington, DC, USA, 22 April 2021. US President Biden announced plans to reduce the US gas emmission by 50 to 52 percent below the 2005 level by the year 2030. The meeting is intended to underline the urgency and economic benefits of stronger climate action on the road to the United Nations Climate Change Conference (COP26) in Glasgow in November 2021. Around 40 international leaders attend the summit. EPA-EFE/AL DRAGO / POOL MANDATORY CREDIT - AL DRAGO

Earth Day 2021 saw world leaders one after the other appear on screen and announce ambitious targets to cut emissions. Humanity's deadline is the end of the decade.

Once coal was king — it powered industrial revolutions and made countries rich, but now the fossil fuel has been placed on notice.

President Cyril Ramaphosa was among world leaders when he told the delegates of US President Joe Biden’s Leaders Summit on Climate that emissions in the country would begin to fall by 2025, rather than peak and plateau that same year.

But the biggest surprise on the first day of the summit was from the host country.

Biden’s new commitment is to cut US fossil fuel emissions by up to 52% of 2005 levels by 2030. This was from the second-largest CO2 emissions producer after China.

His declaration was a statement that the US was back in the global climate fight, four years after the country withdrew from the Paris agreement.

“The signs are unmistakable. The science is undeniable. The cost of inaction keeps mounting,” Biden warned.

Forty other leaders through the course of the day also gave short addresses to the gathering.

Ramaphosa told the audience that South Africa had introduced new target ranges that were more ambitious than before.

“Firstly the top of the 2030 range has been reduced by 28% or 174 million metric tonnes, which is a very significant reduction. Second, according to our previous nationally determined contribution, South Africa’s emissions will peak and plateau in 2025 and decline only from 2035,” he said.

His organisation believes this had already happened in 2017.

“What they are putting forward is not good enough, our emissions already peaked in 2017,” he said, explaining that this had been caused by falling electrical output from increasingly unreliable power stations.

Ramaphosa also told the delegation that there were plans to build capacity to generate more than 17 gigawatts of renewable energy by 2030.

This is nearly half of what Eskom now generates.

Demand for coal, says Engelbrecht, will fall off dramatically, especially as many countries at the summit spoke of reducing their imports of the fossil fuel. South Africa is the fifth-largest exporter of coal. Jobs could be lost if others aren’t created from the new renewable economy. Ramaphosa, however, said they would work at preventing this.

“We remain committed to contributing our fair share to reduce global emissions and to do so in the context of overcoming poverty inequality and underdevelopment,” the president said.

What was missing from the first day of the summit was the detail.

Biden did not explain how the US, the world’s third-most industrialised nation, was going to massively rejig its economy in just nine years.

Ramaphosa didn’t explain what renewables would be invested in and how they would be rolled out.

“We need to see a clear plan and policy on how South Africa is going to completely make over Eskom, Exxaro, Sasol, all our big fossil fuel companies,” said Engelbrecht.

Professor Bob Scholes, also of the Wits Global Change Institute, said this comes at an ideal time for South Africa to move to renewable energy.

“We are not on target, based on current performance and it is a stretching goal. But it is not unachievable for a variety of reasons. One is that energy use in South Africa has been in decline for nearly a decade and secondly, 60% of generation capacity needs to be replaced,” said Scholes, who also cautioned that 17 gigawatts is capacity and not generation.

“This doesn’t translate into the amount of energy you get, because they have different operating characteristics. Some won’t work at night. And if some of that is wind, it only works when the wind is blowing,” he explained.

Japan, like South Africa, has a heavy reliance on coal. It announced a 46% emissions reduction target. South Korea said it would stop the public financing of new coal-powered stations.

The world’s biggest CO2 producer, China, said it would work with the US in cutting emissions.

In South Africa, Khambule said that implementing this change would be hard, but over the past decade there had been a shift.

“There has been a gradual shift that we need to change things and there is now more commitment. There is a lot of buy-in, but the levers are not working fast enough,” he said.

Engelbrecht said Biden’s announcement on Thursday was the signalling of the birth of a new world that would change rapidly. “The world is at last making this change and the question is, is South Africa going to be able to execute its own policy?” DM