Wheel-life solution: How Covid-19 made Khayelitsha woman rethink what makes a space public 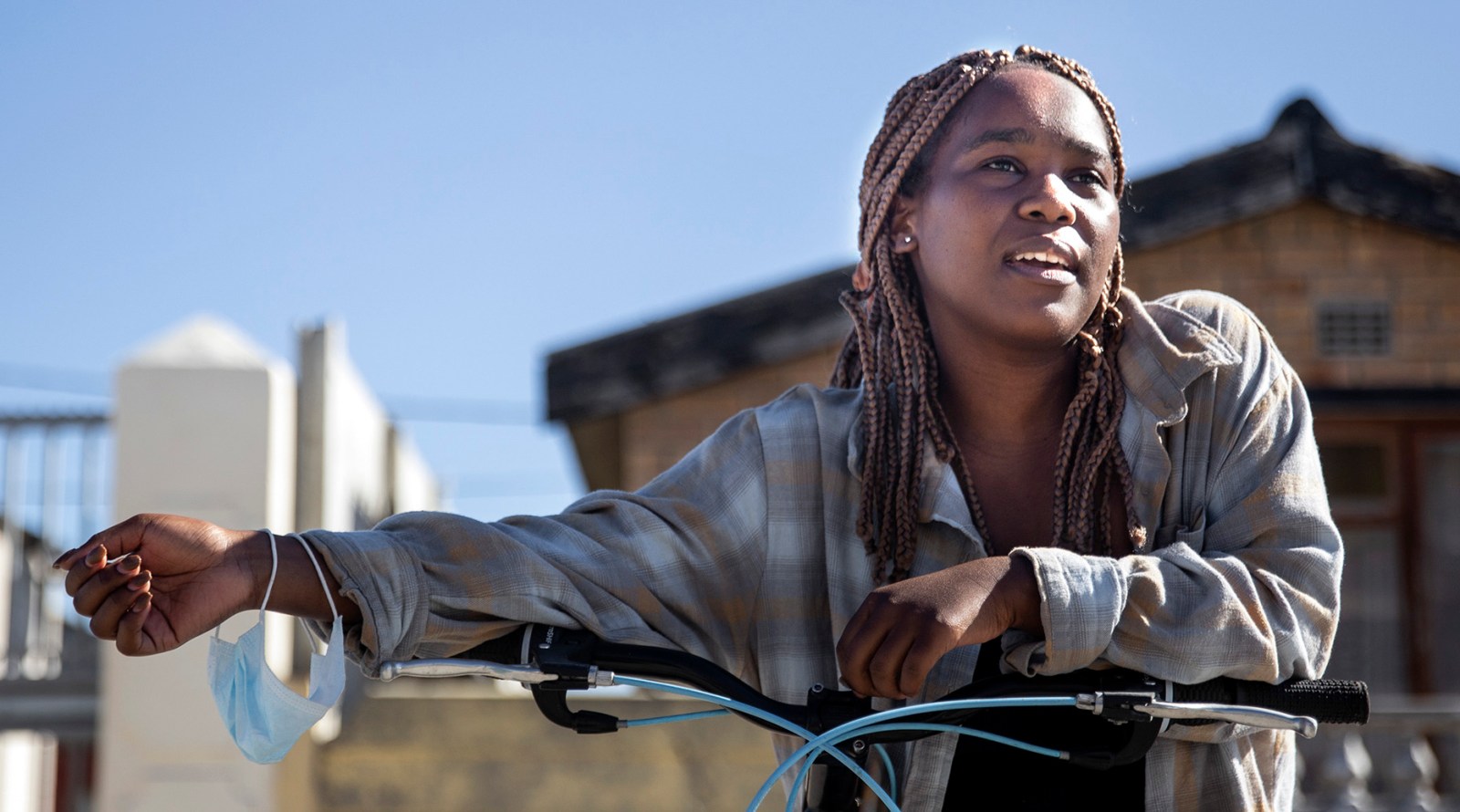 Khanya Qongqo says the difference between private and public spaces is not always clear. She, for instance, turned her own backyard into a community kitchen when her Community Action Network was unable to find a community centre. (Photo: Ashraf Hendricks)

In a country characterised by myriad gates, security personnel and other barriers, taking ownership of public space might entail both raising awareness of what public space means and thinking about our private spaces differently. Khayelitsha resident Khanya Qongqo takes us on her journey to this conclusion.

Based in Harare, Khayelitsha, Khanya Qongqo helped set up a community kitchen in mid-2020 and received a bicycle as a donation to help with kitchen duties. Since then she has become an advocate for bicycles as a way of travelling and connecting with others in her neighbourhood. Now 26, Khanya learnt to cycle as a child, but never owned a bicycle before last year. She says the best part is that she is “able to get from point A to point B without depending on anyone”.

Though she contends with daily safety issues on the road, she wants to see more people, particularly women, on bicycles. In fact, Khanya says she feels safest when cycling with others and in 2020 joined several social rides. She says motor vehicle drivers need education and awareness about bicycles: “Because you own a car, it doesn’t mean you own the road.”

The idea of ownership comes up in several of our conversations and Khanya has made me reflect on the porous boundaries between public and private spaces, particularly in the context of the Covid-19 pandemic. She explains how through her community action network, a soup kitchen was set up in her backyard. Soon children and other people started coming in to get food, “no questions asked”. In her view, the fact that the yard was no longer controlled by her made it a public space.

Khanya says a community centre is what they needed. But when trying to get such space they were met with closed doors. In turning her home into a “community centre”, Khanya highlights the inadequacy of our systems, which prevent people from using common spaces paid for by taxes. It also points to the transformation of private spaces to serve those unmet needs among residents.

Indeed, she speaks of the Khayelitsha Mall as a public space, too, since this is where people spend a lot of time, socialise and enjoy an afternoon on a weekend. In addition to the convenience of buying what is needed, the mall also provides a sense of safety and protection.

When it comes to public spaces and the opportunity and need to improve them, Khanya talks about a park near her home in Harare as well as the local police station. She says both have an environment and a look that is uninviting and hostile. “It would be nice to make the park green, add plants, make it a happy place for kids,” she says.

Khanya also points to the lack of clarity on what constitutes public or private space and suggests that signs could help in this. This is an interesting but not unproblematic suggestion. On one hand, public spaces are meant to be self-evident and naturally open to everyone. On the other, South African cities are characterised by myriad gates, security personnel and other barriers that signal exactly the opposite, even in the most public of spaces.

How do you create an environment that communicates openness while protecting all users of the space? In Khanya’s experience, cycling in Khayelitsha means asserting her right to the road, which is more often than not “owned” by motor vehicle drivers. And so a few signals would not only help her navigate the roads more safely, they would also create a level of awareness that could invite more people to use the space and thus engage in a virtuous cycle, so to speak.

Similarly, in public buildings, where the expectation is to be assisted by public servants, it seems that signs that communicate more than just the name of the place and spell out that these are indeed public spaces, might start to shift the way we perceive and use them. It’s a long shot and perhaps just a cosmetic change for institutions that need a profound overhaul to serve the public more efficiently. But it could make the experience of the place, as Khanya describes, a little more pleasant.

Perhaps there is also something to be said for the fluent interface between private and public where the separation is not so clear. Shopping malls are among those places. Whether you’re at the Khayelitsha Mall or the V&A Waterfront, it’s evident that people see malls as destinations for an outing and that, in South Africa, they are used the way parks and similar places in other countries are used.

It’s a cliché to say the pandemic has changed how we experience our cities, but Khanya reminds me what Covid-19 has meant in Cape Town specifically. It has blurred the line between private and public space in some cases, even if this distinction was never clear to start with.

It has also highlighted the challenges in sharing our roads, particularly as more physical space has been required to keep Covid-19 at bay and as more people, like Khanya, have started using bicycles. Ultimately, I would also like to think that solidarity and movement across different parts of the city (through the community action networks, for instance) has demonstrated a desire to break through the many barriers that keep us apart, within our private and public spaces. DM/MC