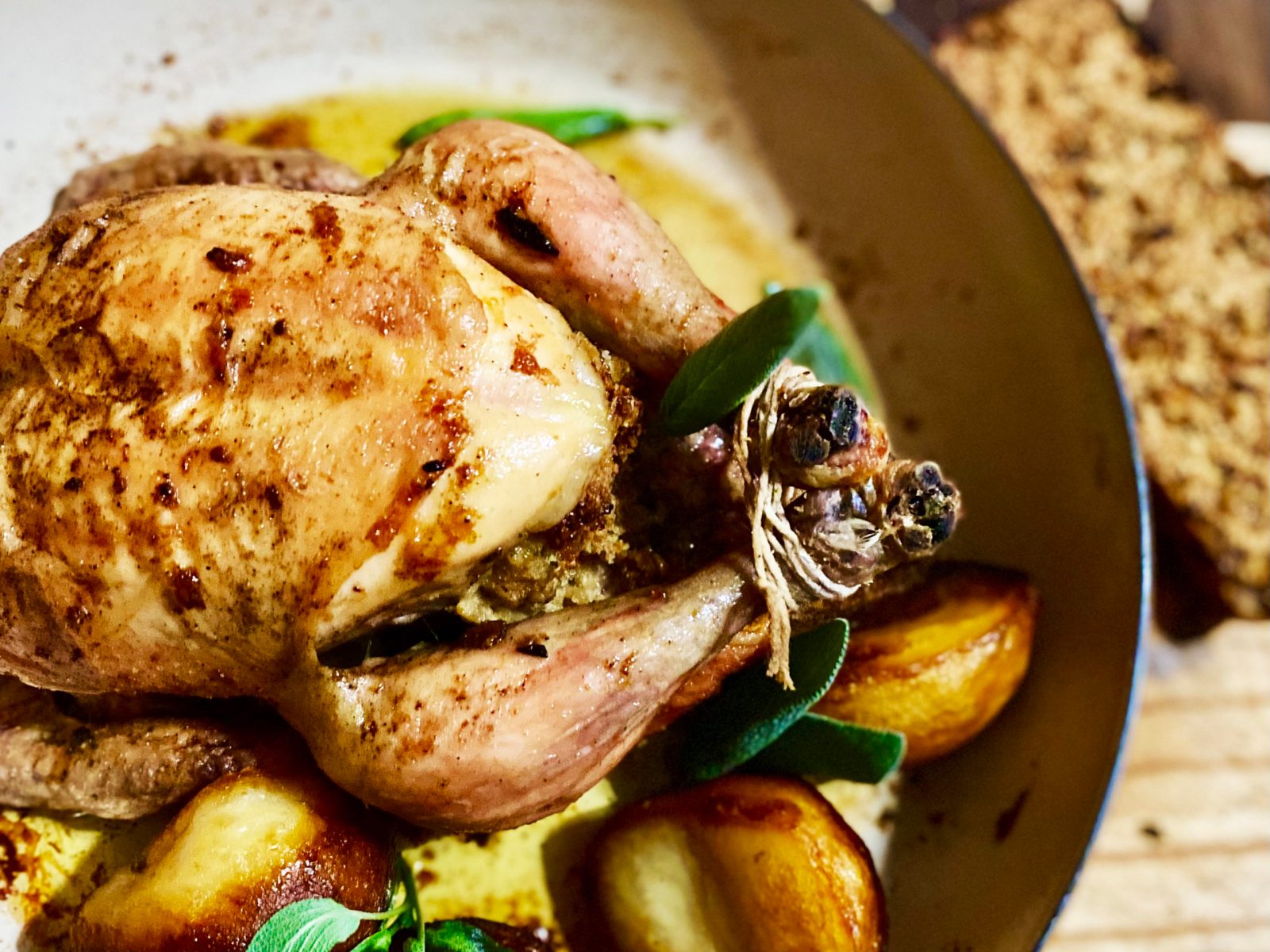 Sage and onion stuffing, inside the chicken and out. (Photo: Tony Jackman)

It’s the original deconstructed dish. Intended as a way to flavour and moisten a roasting chicken from inside its cavity, chefs who (you’d think) would know better started making stuffing separately. We did it both ways, to prove a point.

Back in the day, the stuffing was always inside the chicken. That was the entire point of it. A mixture of onion and aromatics, moistened with stock or wine and bound with breadcrumbs and egg, was pushed into the cavity of the bird before roasting it. While it was cooking, the chicken would take up the stuffing’s flavour – the sage, the onion, the garlic, lemon, spices, whatever you’d chosen to put in it – and when everything was done, a little of the stuffing would be scooped out and served alongside the chicken and vegetables on your plate.

But… otherwise sensible chefs thought it would look neater if the stuffing was, instead, pushed into a loaf tin and baked alongside the chicken, so that neat little squares could look so much tidier on the plate. You see the problem, right?

What if I was wrong? What if the chicken benefited little from whatever was in the cavity (I knew the answer but let’s go with it)? What if the stuffing, when in a hot tin in a baking oven, was so much better than the exact same mixture cooked inside the bird?

You know what the answer is because it just makes sense. The “stuffing” (and, yes, the clue as to where it goes is in its name) cooked in a loaf tin did cut neatly into slices and looks pretty good on the plate, but it was dry even though I took it out of the oven at what seemed its optimum point when it was cooked, but not dried out, and crisp at the edges. The stuffing in the cavity was as delicious as I remember the chicken stuffings of the old days to be. Moist and intensely flavourful. I concede only one thing: it did not look as pretty.

Consecutive tastes of the loaf tin “stuffing” and the one from inside the bird? No contest. The former had barely half of the flavour of the latter. And the chicken was supremely moist and flavourful. A stuffed chicken is simply the best.

For my money, making stuffing outside of the bird is a triumph of style over commonsense. And a victory of appearance over flavour. But that is what too much of modern cooking is all about: so many dishes these days look like a million dollars, but taste like five cents.

Sage and onion is as traditional as it gets. It is more usually moistened with stock (chicken or vegetable), but I like to use wine. Here’s my way for a large quantity so that there’s enough for both a loaf tin of it and to stuff the bird… so divide the recipe in half if you need to.

Sauté the onion, garlic and celery with the finely chopped sage leaves in butter. Add the wine and zest and simmer until most of it has cooked away, but not all. Season with salt and pepper to taste. Stir in the breadcrumbs, then add 2 beaten eggs, off the heat, and combine. Season the cavity of the bird with salt and pepper. Spoon in the stuffing and pack it tightly. If you’re trying it both ways, grease a smallish loaf tin or similar and pack the rest of it in there, to roast alongside. Tie the legs with kitchen string. Roast at 220℃ for about 90 minutes or until the flesh is no longer pink at the centre. DM/TGIFood