How can we build a less violent South Africa? Throw the book at it 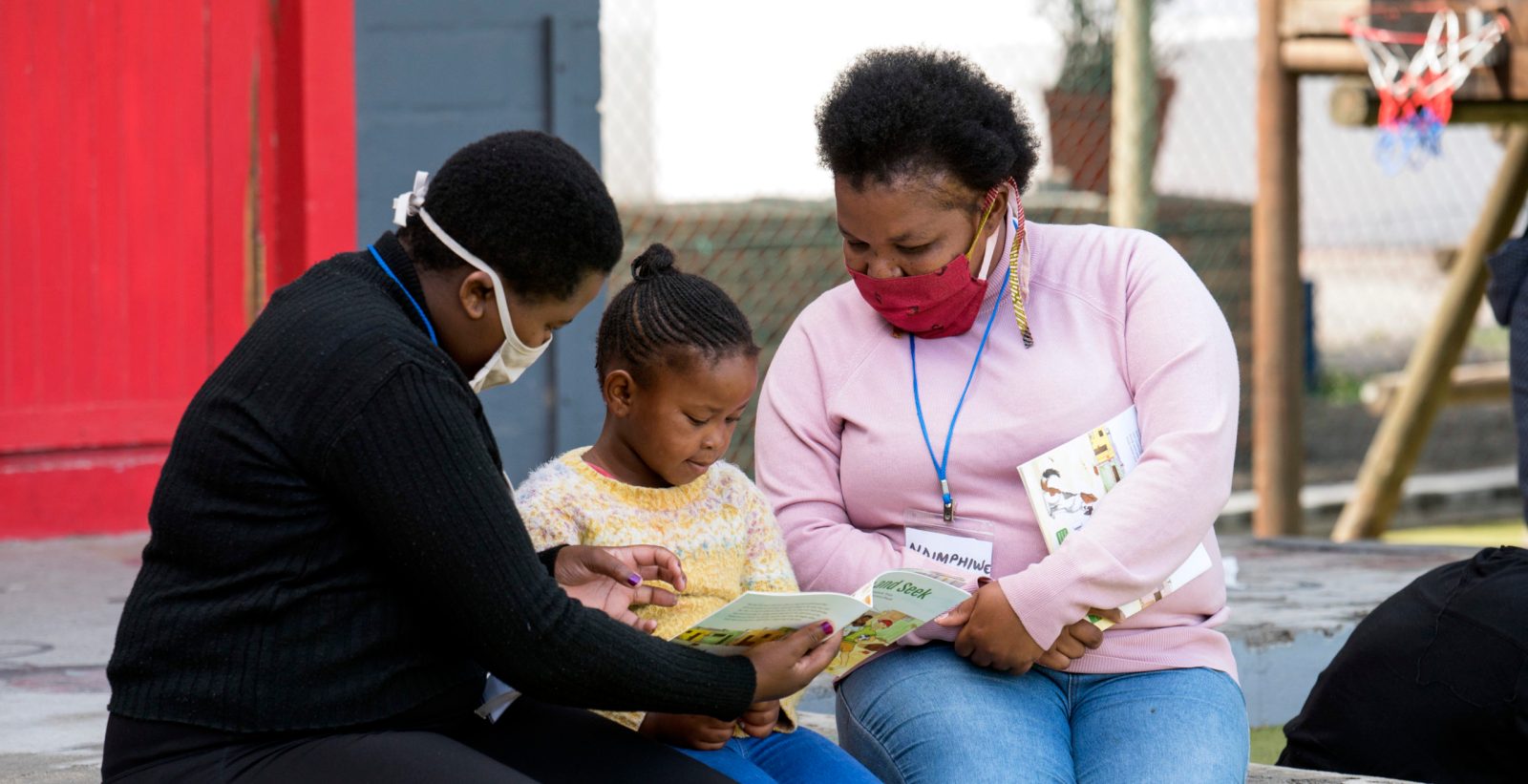 Book-sharing facilitators Nolukholo (left) and Ndimphiwe practise with a boy from a preschool in Masiphumelele. (Photo: Jennifer Khumalo)

Global research — including in Khayelitsha — has found a link between book sharing with young children and a reduced likelihood of violence later in their lives. In South Africa, where violence rates are high and resources are few, cheap and easy interventions for parents that directly affect the violence risk factors of their young children are critical.

World Book Day is celebrated annually on 23 April. While it is an opportunity to celebrate the power of literature, the role of books in reducing violence is rarely explored —  but it can be of crucial importance in South Africa, where on average 58 people are murdered daily. Areas of the country have been compared to war zones owing to levels of violence.

Addressing this violence requires a multipronged strategy on macro and micro levels. Combating socioeconomic inequality is critical, as is finding solutions to the 32.5% unemployment rate.

Equally important is the work of grassroots organisations that aim to combat violence. Following recent research, the Mikhulu Child Development Trust —  an NPO that promotes book sharing in South Africa —  considers itself a participant in the fight against violence.

“Dialogic book sharing” is a special interaction between a caregiver and a young child using wordless picture books. It is not about reading to a child, but engaging the child interactively over the pictures, asking stimulating questions and following the child’s interests. The link between this seemingly unrelated and innocuous activity and violent behaviour seems tenuous if the origin of violent behaviour is disregarded.

It’s in you and me

Violent behaviour in adolescence and adulthood has its roots in early childhood. Humans are at their most aggressive when they are only two years old. At this age, children are not yet able to control their impulses and as a result act out aggressively when they do not get what they need or want.

An important tool in preventing later violent behaviour is to support young children to develop ways to deal with, and overcome, these aggressive impulses. Research has established that child aggression is one of the key precursors to violent behaviours later in life, and that the following risk factors affect this:

The World Health Organization (WHO) has called for programmes that support and empower parents to ensure positive early relationships and effective stimulation for their children. These programmes have been found to reduce aggressive behaviour and the likelihood of violent acts in early adulthood.

For example, research in a 15-year follow-up of young adults in Chicago found that participating in an early childhood parenting programme almost halved their chances of being arrested for violent offences later in life.

The power of parenting programmes

It is not surprising that the WHO has declared an “urgent need for the evaluation and implementation of low-cost parenting interventions… to prevent violence” in low- to middle-income countries such as South Africa.

These adverse outcomes themselves are significant predictors of persistent aggression in childhood and violent behaviour later in life.

Research in Khayelitsha and Brazil

Academic research involving a group of mothers and children in Khayelitsha, Cape Town, in partnership with the Mikhulu Trust, found that dialogic book sharing successfully targets these three parenting risk factors (unresponsive parenting, harsh parenting and poor cognitive stimulation), and has been shown to reduce the three child risk factors (insecure attachment, behaviour problems and cognitive decrements). It has the potential to make a significant contribution to violence reduction.

Similarly, early indications from a 2019 study in Brazil are that book sharing has a positive effect on reducing aggressive behaviour in children.

The Mikhulu Trust has once more called on the South African government to support and encourage home-based parenting programmes as part of its violence-prevention strategies.

Book sharing is an easy, affordable and accessible way to achieve this —  and through training facilitators, the Mikhulu Trust is at the forefront of making this a reality for communities across the country. DM/MC

Kaathima Ebrahim is the CEO of the Mikhulu Child Development Trust.