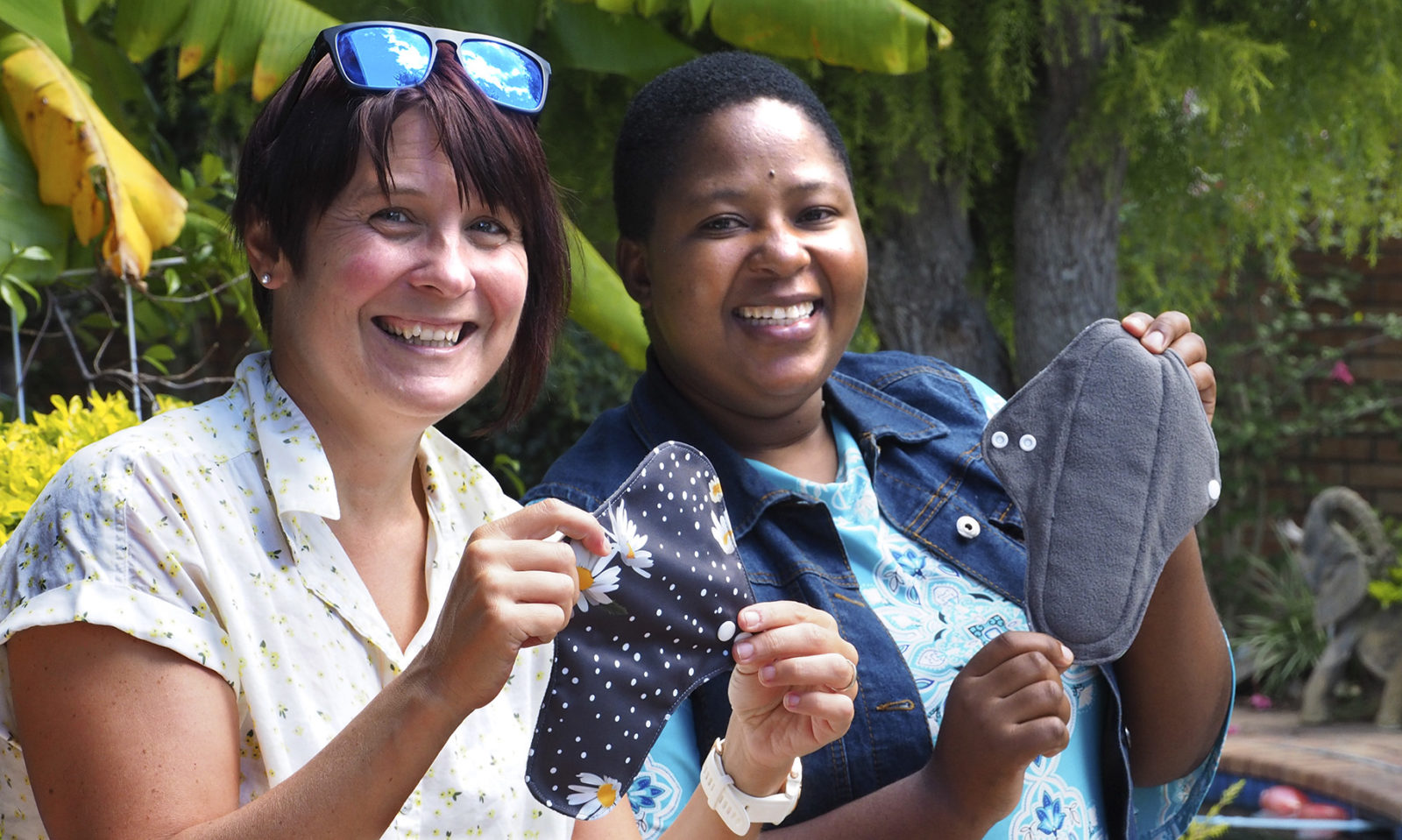 Andrea Mason and Sandra Machinja with their super-absorbent bamboo-charcoal sanitary pads at Andrea's home in Stellenbosch. They’re hoping to finalise the lease for office space in Kayamandi this week. (Photo: Supplied)

How an iron woman is adding sanitary pads, empathy and dignity to impoverished women’s lives.

It’s a crisp morning at the Coetzenburg sports grounds in Stellenbosch, where Andrea Mason is speaking next to the university swimming pool, sipping rooibos tea.

At 39 years old, Mason has a string of endurance titles including 10 Ironman challenges under her belt. Two weeks ago, she swam 35km across False Bay, followed by 360km by bicycle, and then a 2,335m climb up Seweweekspoort Peak, the highest point in the Western Cape.

What does she think of while practically submerged in seawater for more than 10 hours?

Mason laughs. “I sing a lot,” she says. “I have a ridiculous jukebox in my head. I will think of a word, then find a song that has that word and sing it in my mind, but it’s really random.”

Mason’s Western Cape challenge was one of many to drum up support for her charity called Lady Talk Matters, which raises awareness and money for women and girls struggling with reproductive issues around the world. The charity is busy negotiating with the Stellenbosch municipality to open an office in Kayamandi, where it will make and distribute reusable sanitary pads, free.

Referring to her athletic feats, Mason says: “A pretty cool life. But what people don’t see are the hurdles I have faced along the way.”

From an early age, Mason faced severe gynaecological — or “lady problems” – including endometriosis, only diagnosed and treated after 13 years, multiple fibroids and early-stage cervical cancer; all of which culminated in her having a full abdominal hysterectomy at 35.

“I always had problems when I was at school,” she says. “I would pass out in the middle of class; if I was swimming, sometimes I would end up blacking out in the middle of the pool and the lifeguards would have to jump in and get me. At the time, it was put down to me over-training because I would get up in the morning and swim for two hours before school; go to school and get picked up at lunch to go and train more, then go back to school, and swim again afterwards. Because people thought I was overtraining, I was sent to a sports psychologist.”

The daughter of a British military officer, Mason attended 19 schools. Despite her strenuous athletic training as a teenager, inevitably during the week she was menstruating, her performance would falter. Finally, a gynaecologist diagnosed endometriosis, which, Mason says, affects one in 10 women — often unknown to them, as the severe associated period pains are commonly dismissed as “normal”.

Four years after her hysterectomy, Mason founded Lady Talk Matters, through which she put female reproductive matters such as endometriosis and “period poverty” on the agenda.

“Is it fair that women are punished for natural processes that can ultimately lead to the creation of human life?” she says. “I think not.”

Global network endometriosis.org echoes Mason’s statistic, estimating that one in 10 women worldwide suffers from endometriosis in their reproductive years, aged between 15 and 49. It describes the condition as tissue similar to the lining inside the uterus — called the endometrium — found outside the uterus, where it induces a chronic inflammatory reaction that may cause scar tissue.

Symptoms include painful periods, painful ovulation, painful sexual intercourse, heavy bleeding and sometimes infertility. There is no cure, but through specialists, the condition can be managed.

Famous women who have spoken out about having debilitating pain due to endometriosis include celebrity chef Padma Lakshmi, who has detailed how the condition placed pressure on her former marriage to author Salman Rushdie, and actress and producer Lena Dunham, who had a hysterectomy aged 31.

Mason cautions that endometriosis experts do not consider a hysterectomy as a clear-cut solution: “Because, there are so many ladies who have a hysterectomy, and then three, four months, or six months down the line, they’ve still got a significant amount of pain, and then there’s no going back. So a hysterectomy is something that a lot of gynaecologists will try and avoid. They’ll rather try and manage the condition through giving you hormone treatment that effectively puts you into menopause, but temporarily, so you can always reverse it.”

Mason’s next challenge later this year will be in the United Kingdom, where she will swim 66km (this is 1,320 Olympic pools), cycle 812km, run 42km, with a total climb of 3,402m, in five days. Again this will be a bid to attract donations for Lady Talk Matters.

On her own hysterectomy, she says: “My husband and I hadn’t planned to have children, so it wasn’t hard to process from that perspective. The hardest part was not knowing if my body would go straight into menopause. They left a tiny piece of my right ovary, in the hope that it would still function and I wouldn’t go into menopause straight away. And so far so good. I have some menopause symptoms, night sweats being the most frustrating, but I am currently managing those without medication.”

Mason first travelled to South Africa in 2014 while working in corporate information technology for MultiChoice. From 2018, she and husband Karl started splitting their time between Stellenbosch and Chamonix in France, so Mason could train in the Boland over summer. Here, she runs up the mountains around Stellenbosch, swims in the Coetzenburg pool and from Cape Town does regular sea crossings to Robben Island and back.

In South Africa, she was struck by women’s struggles with their monthly cycles: “Basically when we first moved here for six months, through our cleaner and people that we’re associated with, I started noticing that there were particular days that maybe she wasn’t herself, or she wouldn’t come to work. And it was around the same time every month.

“I started discreetly asking, is there a problem? And she was really open. So then we were talking about how, you know, a lot of her friends can’t afford sanitary products and how they use pages out of a notebook. And how in some of the areas the taboo is so strong that they’re not allowed out of the house because it’s deemed as disgusting and you’re not allowed to be seen the whole time that you’re having your period. So I started thinking, well, maybe through Lady Talk Matters we can do something.”

Mason refers to “period poverty”, quoting research by Stellenbosch University’s Law Clinic which found that in South Africa about 30% of female learners miss school when they menstruate, as they cannot afford sanitary hygiene products. This means that female pupils can lose up to 90 days of schooling a year.

South Africa’s finance minister Tito Mboweni scrapped value-added tax of 15% on sanitary pads from 2019, but activists say this is not enough.

At Coetzenburg, on the table in front of Mason, there are two packages sewn from bright print fabric. She unzips one, taking out a small bundle which she unrolls to reveal a thickly lined, sewn sanitary pad. She explains that each packet contains three re-usable, cold washable sanitary towels, made of super-absorbent charcoal and bamboo fabric.

“Obviously you want it to be washable in cold water because a lot of the ladies don’t have access to hot water. It also needs to be able to dry in sunlight, and you want it to have some sort of antimicrobial effect. So we decided that bamboo-charcoal material is the best. Unfortunately, the bamboo-charcoal cannot be sourced in South Africa at the moment. I’ve tried and I’m still looking, but we’re currently sourcing it from China. There are other alternatives I’m looking into, maybe pineapple fibre, but there isn’t enough research into that yet.”

Mason says they have made 1,500 of the sewn sanitary packs to date, at a cost of R100 each. Their goal is to distribute 10,000 of the packs in Kayamandi for free this year; after which they will expand into other townships.

“So far we have employed and trained one lady from the Kayamandi community, Sandra Machinja, with two more being trained to make the products,” she says. “So my charity sponsors the materials, the ladies’ wages, the training. It’s like a little micro-enterprise where they’re making the products themselves, then distributing them in the community for free. It’s not a unique idea — there are similar charities who do incredible work, like Dignity Dreams in Johannesburg.”

Mason’s next challenge later this year will be in the United Kingdom, where she will swim 66km (this is 1,320 Olympic pools), cycle 812km, run 42km, with a total climb of 3,402m, in five days. Again this will be a bid to attract donations for Lady Talk Matters.

As the interview draws to a close, she points to a woman gliding in the pool next to us, saying that it’s open-water swimmer Michelle Weber (who ended 18th in the women’s 10km at the 2016 Olympic Games in Rio de Janeiro.) “Michelle is probably South Africa’s best open-water swimmer,” says Mason. “Hopefully she will get a medal at the Olympic Games this year.”

Mason gathers her sanitary packages and rises to leave. She has an appointment with a physiotherapist — just a standard check-up, she says. DM/MC