European football’s Super League already on the brink of collapse 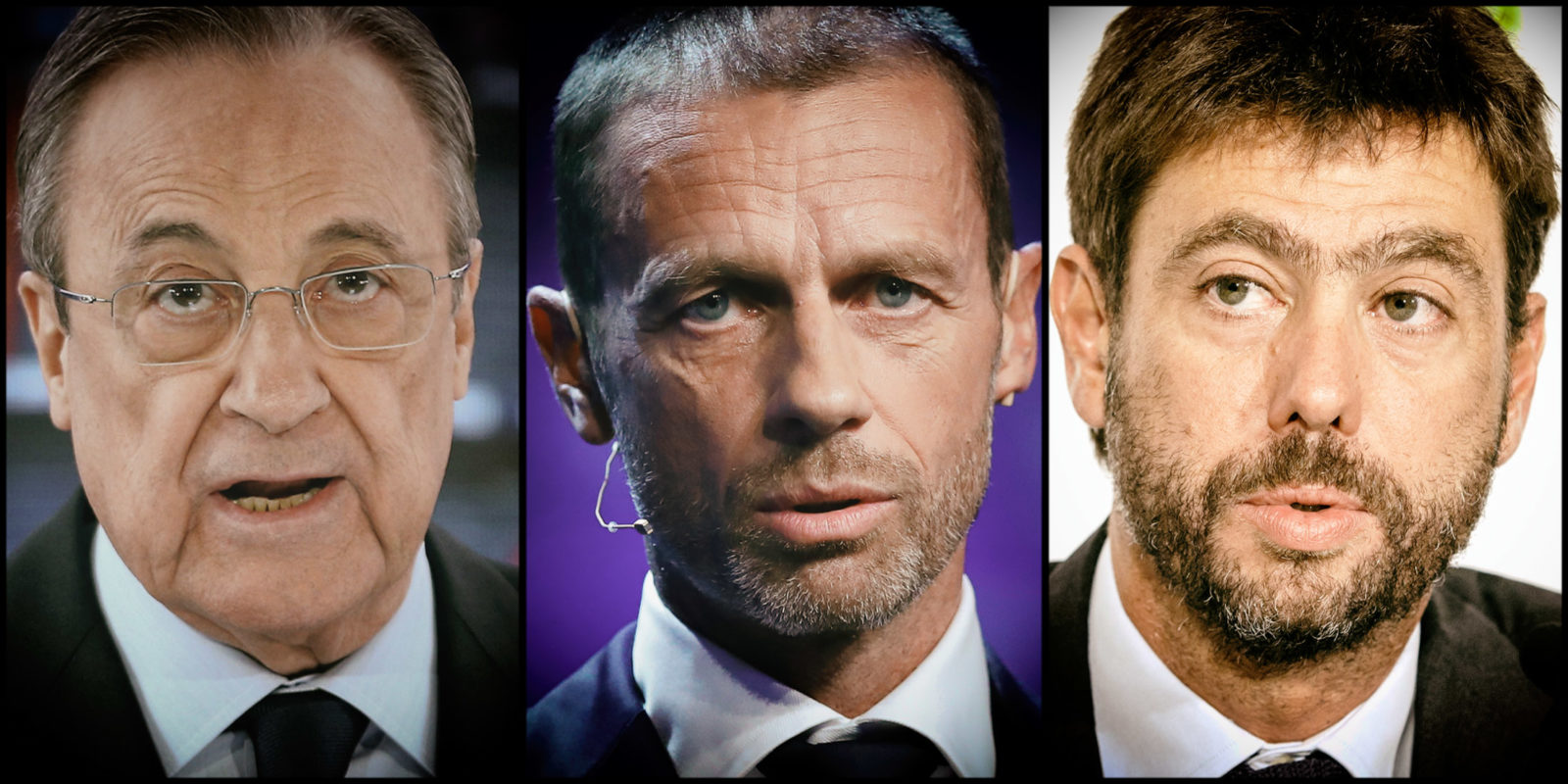 It lasted just 48 hours, but the European Super League era is apparently over – before the 12 breakaway clubs that conceived this colossal ego trip could even design a letterhead or launch a Twitter feed.

European football’s breakaway Super League has seemingly crumbled and the idea has been reduced to rubble.

One of the founding members, Chelsea, offset the collapse of the house of cards when reports of them pulling out of the tournament emerged on Tuesday evening.

This came in the wake of around 1,000 Chelsea supporters gathering outside the club’s Stamford Bridge home ground before their game against Brighton on Tuesday to protest the club’s involvement.

Chelsea’s fellow English Premier League side Manchester City became the first side to formally confirm their withdrawal from the proposed competition in a club statement.

“I am delighted to welcome City back to the European football family. They have shown great intelligence in listening to the many voices – most notably their fans – that have spelled out the vital benefits that the current system has for the whole of European football,” said Uefa president Aleksander Ceferin.

Chelsea and City were by the end of Tuesday followed by the remaining English clubs, Arsenal, Liverpool, Manchester United and Tottenham Hotspur

Two of the founding members from Spain, Barcelona and Atletico Madrid, have also pulled out.

In the wake of clubs jumping ship, there have also been some administrative casualties. Manchester United’s executive vice-chairman, Ed Woodward, has resigned, although he will reportedly stay on until the end of 2021.

At the time of publishing there were also conflicting reports around Juventus chairman Andrea Agnelli resigning. The club was yet to make any formal statement on the report.

Ironically, Uefa chief Ceferin had hit out at Woodward and Agnelli in particular after plans for the league came to light on the weekend. The two were said to be at the forefront of the creation of the new tournament, alongside Real Madrid’s Florentino Perez.

“If I start with Ed Woodward, because it will be shorter, I didn’t have much contact with him, but he called me last Thursday in the evening. He said he is very satisfied with the [new Champions League] reforms, that he fully supports the reforms and that the only thing he would like to speak about is Financial Fair Play. Obviously, he had already signed something else.

“I don’t want to speak much about Andrea Agnelli. He is probably one of the biggest disappointments or the biggest of all. I don’t want to be too personal but the fact is that I have never seen a person that would lie so many times and persistently than he did. It was unbelievable,” said Ceferin.

In a press conference on Tuesday, Manchester City’s manager, Pep Guardiola, said he and his colleagues had little to no knowledge about the Super League.

“I can give you my opinion, but no more. That is the reality. I would love the president of the committee to go out around the world and explain how we got this decision. I support my club… I love to be part of this club,” commented Guardiola.

“But I also have my opinion, but right now it is just a statement. That is why it is uncomfortable for the managers. We don’t have all the information.”

Liverpool’s football players have also put out a joint statement saying they are opposed to the idea of playing in the Super League.

“We don’t like it and we don’t want it to happen. This is our collective position. Our commitment to this football club and its supporters is absolute and unconditional,” read the statement.

What direction the remaining members will take is unclear at this moment, but it is likely that all those involved will sheepishly return back to the Uefa umbrella after a failed temper tantrum.

Why and what is the Super League?

The founding clubs of the Super League believed their power and commercial pull would be enough to force this through.

“Our 12 founder clubs represent billions of fans across the globe and [have won] 99 European trophies,” Juventus’s Agnelli said. “We have come together at this critical moment, enabling European competition to be transformed, putting the game we love on a sustainable footing for the long-term future.”

Two words that have been thrown around since the announcement are “stability” and “sustainability”. And of course, in business, which is what football is, stability and sustainability are usually the direct result of free-flowing finances.

The breakaway clubs felt that as long as they remained within the structures of Europe’s governing body, Uefa, they would not achieve economic stability and sustainability. At least that’s the official version.

Essentially, they wanted a bigger piece of the football pie. By the nature of their stature and standing in European football, they are guaranteed quite a big piece already.

Annually, when the teams that are part of the founding caucus qualify for the Champions League, they stand a great chance of making it to the latter stages of competition, which is where the money is.

This was not enough though. Especially as it’s not guaranteed income. Under the Champions League format, teams earn their place in the competition on merit depending on their performances in their domestic leagues.

This means that the so-called big teams are not always assured of a place in the lucrative competition. Manchester United have been in and out of the tournament in recent years. The same is true for Arsenal, Tottenham and the two Milan clubs. Liverpool were eliminated from the 2021 Champions League last week and are currently sixth in the Premier League. They are not guaranteed a place in next season’s Champions League as it stands.

Before a ball is even kicked, the plan was for each of the 12 founder clubs, plus three more, to share in a €3.5-billion (R60-billion) pot.

Although this has been labelled an “infrastructure grant” and a “welcome bonus” it is in fact a loan against future media rights revenues that will need to be repaid.

Streaming juggernauts Amazon and Disney were said to have already taken a keen interest in the broadcast rights of the tournament. If heads of agreement have already been signed as the concept collapses, it might end up costing these clubs millions.

On Monday, the first chairman of the Super League and the president of Real Madrid, Florentino Perez, was confident that under the new format they could generate enough income to make the competition sustainable while also lining their pockets.

“When you have no income other than television, you say that the solution is to make more attractive matches that fans from all over the world can see with all the big clubs, and we came to the conclusion that if instead of having a Champions League we have a Super League we would be able to alleviate what we have lost,” Perez told Spanish TV show El Chiringuito de Jugones.

It is important to note that as opposed to the merit qualification of the Champions League, in the Super League the 15 founding clubs would always be assured of a place in the competition and as a result their income, regardless of how they performed in their domestic leagues.

Five more teams were to gain entry through their domestic displays. They would then be split into two groups of 10 each, with teams that make it out the group stages playing in the quarter-finals.

Naturally, the move received a backlash from Uefa, which announced an expanded and reformed 36-team Champions League this week, which will include a single league format to replace the group stage.

The world football governing body, Fifa, other football clubs, ex-players and supporters’ unions of the breakaway teams were also scathing in their criticism.

The last 10 Champions League titles have been won by four of the Super League founding clubs. Bayern Munich are the only winners of the competition in the last 10 editions who have so far opted against joining the Super League.

Commenting on the plans around the tournament, Bayern Munich CEO Karl-Heinz Rummenigge said: “We are convinced that the current structure in football guarantees a reliable foundation. FC Bayern welcomes the reforms of the Champions League because we believe they are the right step to take for the development of European football. The modified group stage will contribute to an increase in excitement and the emotional experience in the competition.

“I do not believe the Super League will solve the financial problems of European clubs that have arisen as a result of the coronavirus pandemic. Rather, all clubs in Europe should work in solidarity to ensure that the cost structure, especially players’ salaries and agents’ fees, are brought in line with revenues, to make all of European football more rational.”

Former Liverpool and England defender Jamie Carragher said it was shameful what the owners, particularly of the English clubs, were doing in order to fill their own pockets.

“What they’re doing right now is dragging institutions we’ve seen in this country for over 100 years basically through the mud, burning the history of what those clubs are about,” commented Carragher on Sky Sports.

The move by these 12 clubs has been labelled elitist in nature, with the exclusion of smaller sides said to be at the heart of it.

Traditionally, stories of teams such as Leicester winning the English Premier League and qualifying for the Champions League have always been wholesome to consume.

With the arrival of the Super League, those stories would not exist.

It appears they have taken heed of his plea. DM