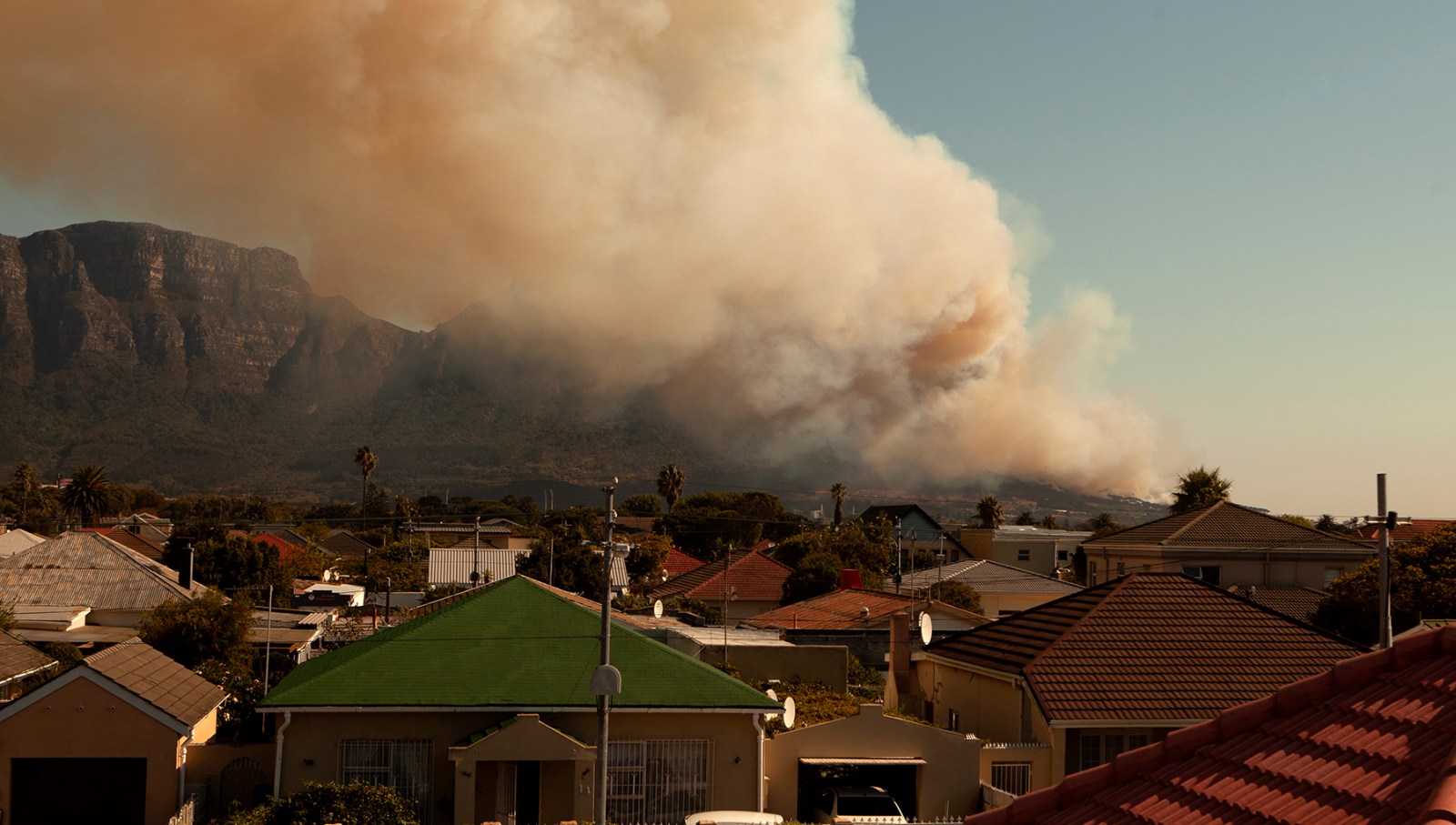 A fire rages over Philip Kgosana Drive towards Rhodes Memorial and UCT on 18 April 2021. (Photo by Ziyaad Douglas/Gallo Images)

The disturbing footage of the fires in Cape Town and Johannesburg have once again provided a smokescreen for the appalling state of our fire services, especially in the metros.

A fire in a hospital is obviously an extremely serious matter. Patients and staff of Charlotte Maxeke Academic Hospital had to be relocated, some of them at great risk to their health. The people of Johannesburg, already subject to a struggling health service – infamous for its long queues, crowded wards – and the impact of Covid-19 are denied access to a major hospital that is supposed to service a large section of the city’s population, especially those who are not on private medical schemes.

The students, staff and residents in Mowbray, Cape Town and beyond have been terrorised by a wildfire that threatened to take people’s lives, livelihoods and habitats. Thousands of students, residents and rough sleepers have been moved and had their lives seriously disrupted.

These two headline-grabbing fires hide a shocking truth. A truth that firefighters and their unions have been trying to get into the public arena for years: that the fire services in almost every part of the country are in a deep crisis, and no more so than in our large urban areas.

From the Bank of Lisbon to the Mai Mai Market

Almost three years ago a fire at the Bank of Lisbon, then on lease to the Gauteng government, took out the upper floors and eventually led to the high-rise building in the centre of Johannesburg being demolished. Three firefighters needlessly lost their lives evacuating people from the building. In the media frenzy that followed politicians from all parties promised all manner of inquiries, improvements, further safeguards and resources to re-equip the service.

The shocking state of our fire services at that time was exposed to a frightened public. But it had been known by the firefighters and their union for a long time.

Johannesburg, for example, is supposed to have more than 100 fire appliances ready to cover outbreaks and other incidents anywhere in the city. At the time of the Bank of Lisbon fire there were just five (yes, five) appliances to cover the entire city, including our townships.

The Bank of Lisbon fire was not properly addressed. For three days the fire raged, and if not for bringing in the fire services from other municipalities and OR Tambo Airport, it would have burned even longer.

Three years on and the same measures had to be taken at Charlotte Maxeke Hospital because the local fire service could not cope. Three years on and nothing has changed. In fact, many firefighters say the situation is far worse. Heaven forbid that a fire should break out elsewhere while such an incident is taking place because the public will literally be left to their own devices.

It was revealed during the Bank of Lisbon fire that even the most basic equipment was in short supply, the majority of station managers supposedly mobilising to address the fire were disorganised and rendered helpless, many of the fire hydrants at street level were completely inoperable, sprinklers such as those inside the building had not been checked, and water pressure could not reach the upper parts of the building, where one firefighter became trapped and was “blown” out of the upper floor to a ghastly death that left him unrecognisable to his family.

In fact, there was a hefty catalogue of shortcomings that should have been properly reported to a full-scale inquiry. An inquiry that should have made mandatory recommendations to be acted upon for the common good, and which should have charged those responsible for allowing the service to be so run down and incapable of protecting our people.

Instead we have had excuses, bureaucratic delays, political infighting, and a shocking disregard for the welfare of the public and the firefighters.

It has now emerged that more than 40 fire appliances (including fire engines) for the City of Johannesburg, costing millions, should have been delivered years ago. Instead they are stuck in the middle of a bureaucratic mess involving tender irregularities, inappropriate specifications for the appliances and buck-passing by successive politicians who are blaming each other. Meanwhile, our city and its surroundings burn to the ground, literally. In Johannesburg there are still only a handful of appliances to serve the entire city.

Last week, in the Mai Mai Market district of Johannesburg, informal economy workers living in an old five-storey building were forced to jump from it to escape a blaze. Three died doing so while many others died in the fire or were seriously injured. Frankly, this is nothing short of criminal neglect by the local government and must change.

It doesn’t matter what political flag you wave, it doesn’t put out fires

The situation in Cape Town is hardly any better. If not for the use of super-exploited temporary firefighters, who receive paltry allowances of R11.42 per hour as part of an Expanded Public Works Programme scheme, the fire that engulfed parts of the university and surrounding areas would have been far worse.

Incredible though it sounds, 525 firefighters have been threatened with suspension and possible dismissal in Cape Town because their union has correctly fought for an end to 24-hour shifts that leave firefighters exhausted and unsafe. Many of those fighting the blaze are wondering if they will have a job next week.

Whether it was the DA/EFF coalition in Johannesburg, followed by the current ANC government at city and provincial level, or the DA in Cape Town, the reaction is the same: blame someone else, forget about inquiry deadlines, make endless empty promises, ignore advice from those who know about firefighting, and if you get the chance, victimise the firefighters.

Under successive local governments of all political colours, firefighters have been suspended and victimised for telling the truth about the shocking state of the service, in every corner of the country.

Do-it-yourself firefighting? No match for firefighters on the spot

There can be nothing so heart-rending as listening to a firefighter explain over the phone to a distressed township dweller who is reporting a dangerous and rapidly spreading fire, that there is no appliance available and that instead the caller is advised to form a bucket chain with neighbours, to ensure that residents keep a safe distance, and to effectively wait until the fire has subsided on its own. Meanwhile, the entire worldly possessions and official papers of whole families, whole neighbourhoods, go up in flames.

The women and men who make up the fire service are a particular kind of worker. They are not just extremely knowledgeable about how to handle different forms of fire and catastrophes, but they are also highly skilled in rescue, safe evacuations and fire management. Unlike most other firefighters in the world, they also have paramedical expertise to enable them to treat and handle the injured on the spot, and crucially to make fire victims ready for hospital treatment, saving invaluable time and lives in the process. They are also extremely committed to the work they undertake, and completely rely on the need for teamwork and watching each other’s backs.

Hardly surprising then that municipal managers, charged with cost cutting, privatisation, austerity and axing service delivery, attack firefighters when they expose this shocking state of affairs. And when those in Public Works who are supposed to ensure that fire hydrants are working and that buildings are undertaking proper fire precaution measures are also called to account.

Listen to the firefighters – help them to protect our people

For our part, DEMAWUSA will continue to give 100% support to our firefighter members. We will fight against their victimisation, the unsafe working practices they are being forced to accept, and against the continuing cuts in the service they need to protect our people.

We call upon the authorities to stop squabbling among themselves and to stop blaming and victimising those on the frontline trying to undertake their work protecting the public.

We demand that local and central government congratulate, not condemn our firefighters.

We call for an end to the super-exploitation of those on Expanded Public Works Programme schemes and for full employment.

We call for a full disclosure of what emerged from the Bank of Lisbon fire.

We call for a full national inquiry into the fire service as a whole.

In the meantime, we will, with our federation SAFTU, by arranging for a workers’ enquiry into the challenges faced by all firefighters and will be calling upon all unions to support the initiative.

Our aim is simple: to ensure that Simphiwe Moropane, Mduduzi Ndlovu and Khathutshelo Muedi, who died in the Bank of Lisbon fire, and all those who have been lost or injured, did not die in vain. Nothing less will do. DM/MC