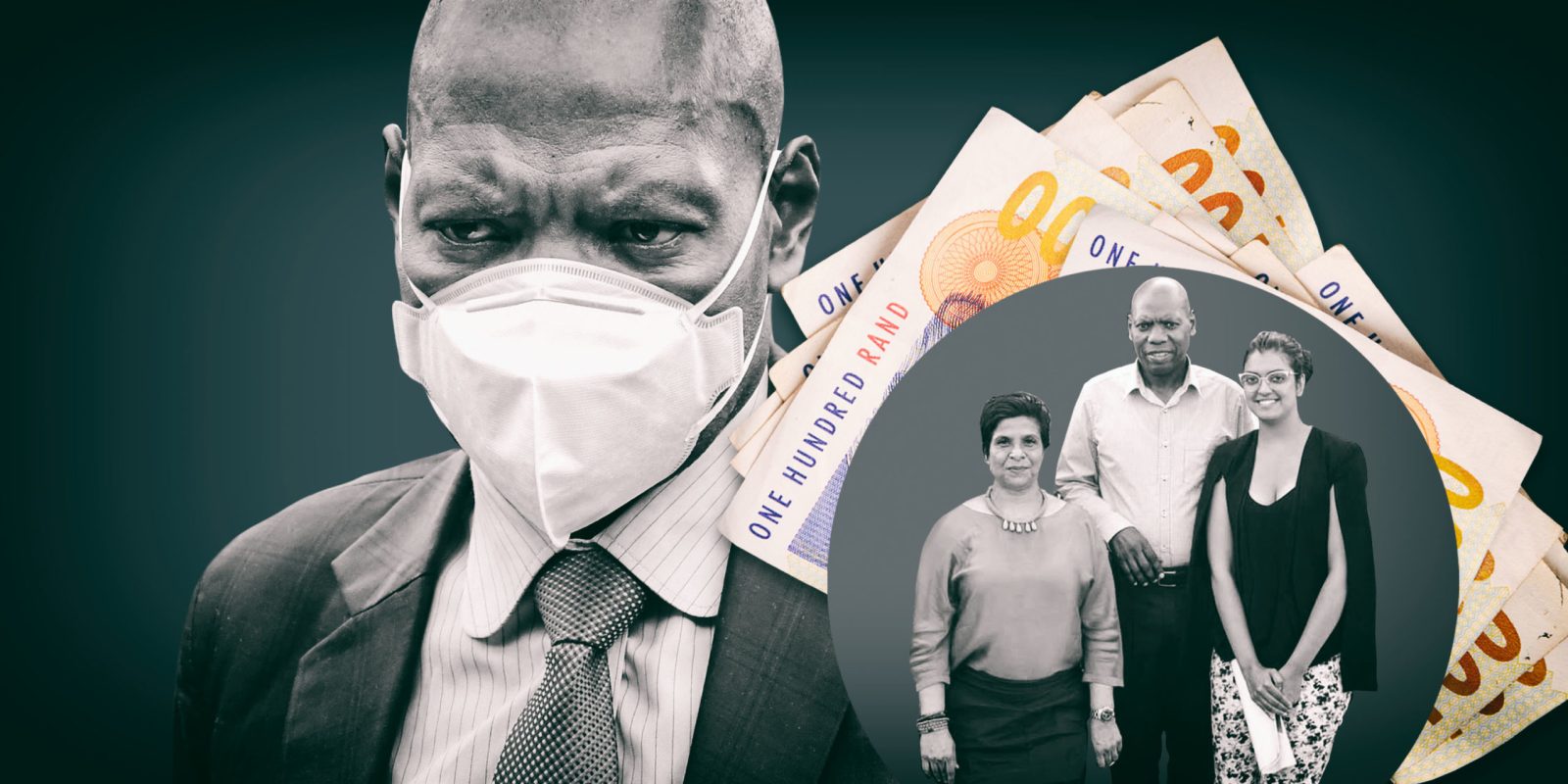 Tahera Mather, a long-time associate and former personal spokesperson of health minister Dr Zweli Mkhize, was at the centre of a dubious communications contract awarded to Digital Vibes in 2018.

Documents submitted by Digital Vibes in a successful bid for a R3.9-million contract from the Municipal Infrastructure Support Agent (MISA) are riddled with allegedly bogus claims about the company’s “team members”.

For a description of Digital Vibes’ background, as included in its bid documents for the 2018 MISA contract, see here: Digital Vibes MISA tender company profile

The tender specifications placed considerable emphasis on the qualifications and experience of the bidders’ team members and on each company’s track record regarding earlier work in the public sector.

It is, therefore, possible that Digital Vibes secured the contract as a result of the allegedly fraudulent representations in its bid documents.

MISA, an entity of the Department of Cooperative Governance and Traditional Affairs (Cogta), awarded the contract to Digital Vibes in August 2018.

At the time, Mkhize was the minister of Cogta, MISA’s parent department, while Mather worked as his personal spokesperson.

Our latest investigation confirms that Mkhize’s close associate was intimately involved in Digital Vibes’ affairs while she worked at Mkhize’s side.

Mather would also later play a key role in a now-suspended multimillion-rand communications contract from the Department of Health, as previously revealed by Scorpio.

Speaking through her attorney, Mather denied that she had committed fraud.

She added that Digital Vibes had completed the MISA project “in full”.

There was no response from Radha Hariram who, at least on paper, serves as Digital Vibes’ principal director.

The bid documents for the MISA contract make no mention of Mather, but she appeared on the scene as Digital Vibes’ “project manager” after the obscure communications firm had secured the contract.

This was confirmed in a written response from MISA.

“After the bid was awarded, the project manager designated by Digital Vibes was Ms Tahera Mather,” stated MISA.

The Digital Vibes bid submission, however, put forward someone else as the company’s would-be “team leader” for the project.

According to the documents, Manusha Pillai supposedly held this position at Digital Vibes.

We got in touch with Pillai, who currently works as the head of communications at the Human Sciences Research Council.

In fact, Pillai did not do “one stitch of work” for Digital Vibes, she told Scorpio.

She said Mather, whom she knew from her previous job at Brand South Africa, contacted her in 2018 and asked for her CV and a copy of her master’s degree.

Pillai was aware that Mather had been preparing a submission for a government tender.

Hoping that she might secure some freelance work, Pillai complied, but she never heard from Mather again, she claimed.

There are other holes in the Digital Vibes bid documents.

The submission also listed Zolile Lobe as one of the company’s team members.

Lobe, who now works as a provincial government spokesperson in the Free State, was shocked when he heard that his credentials were included in the bid documents.

He told Scorpio that he knew Mather from the period in which she worked at Luthuli House as an aide to Mkhize. At the time, Mkhize was the ANC’s treasurer-general.

Lobe had previously worked for Fikile Mbalula when he was the minister of police, but he lost his job when Mbalula left that portfolio in early 2018.

Lobe was searching for employment, and he says he may have given his CV to Mather “in case something came up”.

But Lobe said he had “no idea” that she had included his details in Digital Vibes’ bid submission for the MISA contract.

Mather denied that she had included Pillai and Lobe’s details without their knowledge.

“All CVs were obtained with permission,” claimed Mather.

Lobe, however, was adamant that this was not the case.

“If I had given her my CV with the purpose of being included in a government tender, why did Digital Vibes not use my services once it secured the contract?” asked Lobe.

According to Mather, “Digital Vibes fully intended to use the services of Ms Pillai and Mr Lobe.”

“Due to operational demands, Digital Vibes was forced to find replacements,” she claimed.

Mather added that Digital Vibes had informed MISA that it would replace Pillai with “competent team members”.

The bid evaluation committee’s (BEC’s) report, also obtained through our PAIA application, confirms that a considerable portion of Digital Vibes’ winning score for the tender would have come from points it received thanks to Pillai and Lobe’s supposed positions as Digital Vibes “team members”.

The project leader’s qualifications and experience, for instance, counted for 30 of the 100 available points.

Pillai’s master’s degree alone may have contributed 10 points towards Digital Vibes’ bid score, according to the BEC documents.

It is possible that Mather knew this when she contacted Pillai before Digital Vibes submitted its bid documents.

“She [Mather] said she needed an MA degree,” claimed Pillai.

A further 20 points were up for grabs based on the experience and qualifications of other team members.

It is, therefore, doubtful that Digital Vibes, which had a total bid score of 68.33 out of 100, would have won the contract had Pillai and Lobe not been included.

We asked MISA what steps it took to ensure that the winning bidder’s “team members” actually worked for the company.

“There is no way of verifying whether particular individuals do indeed work for the entities that are bidding. A lot of reliance is placed on submissions by bidders,” the entity responded.

“The winning of the bid by Digital Vibes was not the result of them being allocated points out of nowhere, but they complied with the approved criteria which was developed internally,” maintained MISA.

By the sound of it, MISA will not be taking any action against Digital Vibes, which essentially failed to deliver the “team leader” it promised in its bid documents.

“Our view as MISA is that it would amount to [allegedly] fraudulent conduct on the side of the service provider should it turn out that Digital Vibes submitted Ms Pillai’s personal information as part of their tender proposal without her consent.

“It is, however, important to note that MISA does not bear any responsibility around the engagements between Digital Vibes and Ms Pillai leading to her inclusion in the company’s proposal submitted to MISA in response to the communication services tender.

“In this regard, it is solely the responsibility of Ms Pillai to challenge the service provider on the matter, or even institute legal action against the company for fraudulent use of her personal information,” stated MISA.

Of equal concern is the inclusion of apparently fraudulent examples of previous work in Digital Vibes’ bid submission.

On a page titled “Some of our work”, Digital Vibes included a supposed cover of the National Development Agency’s (NDA’s) 2016/17 annual report.

Makgodu Tsehloane, the NDA’s marketing and communications manager, confirmed that their annual report for that year was not designed by Digital Vibes.

“I asked finance to check if we have ever made payment to Digital Vibes and they can’t find any company with that name amongst suppliers paid to date,” added Tsehloane.

A cover for the Department of Women, Children and People with Disabilities’ 2010/11 annual report, also included in the Digital Vibes bid documents, seems dubious too.

On the Digital Vibes version, the department is incorrectly called the Department for Women, Children and People with Disabilities.

The department’s spokesperson, Shalen Gajadhar, said the Digital Vibes version may have been “an early version which had the language fixed”.

“However, no one in the department can confirm that it was Digital Vibes that did the job,” said Gajadhar.

MISA did not have much to say regarding the allegedly fraudulent examples of previous work Digital Vibes included in its bid.

“We have no comment and the bidder perhaps would be well placed to respond to this question,” said MISA.

Mather did not respond to queries regarding the annual reports.

MISA said it was happy with the work Digital Vibes delivered.

“The Digital Vibes contract has run its course and came to an end within the set timeframes, with MISA obtaining the deliverables required.”

Despite the multitude of concerns over the Digital Vibes bid submission, MISA remained adamant that all was above board.

“The tender was considered and awarded on the basis of the bid proposals provided by bidders, as is normally the case with all tenders. We thus vehemently disagree with your view that this was a rigged or even a ‘corrupt’ tender,” stated MISA. DM