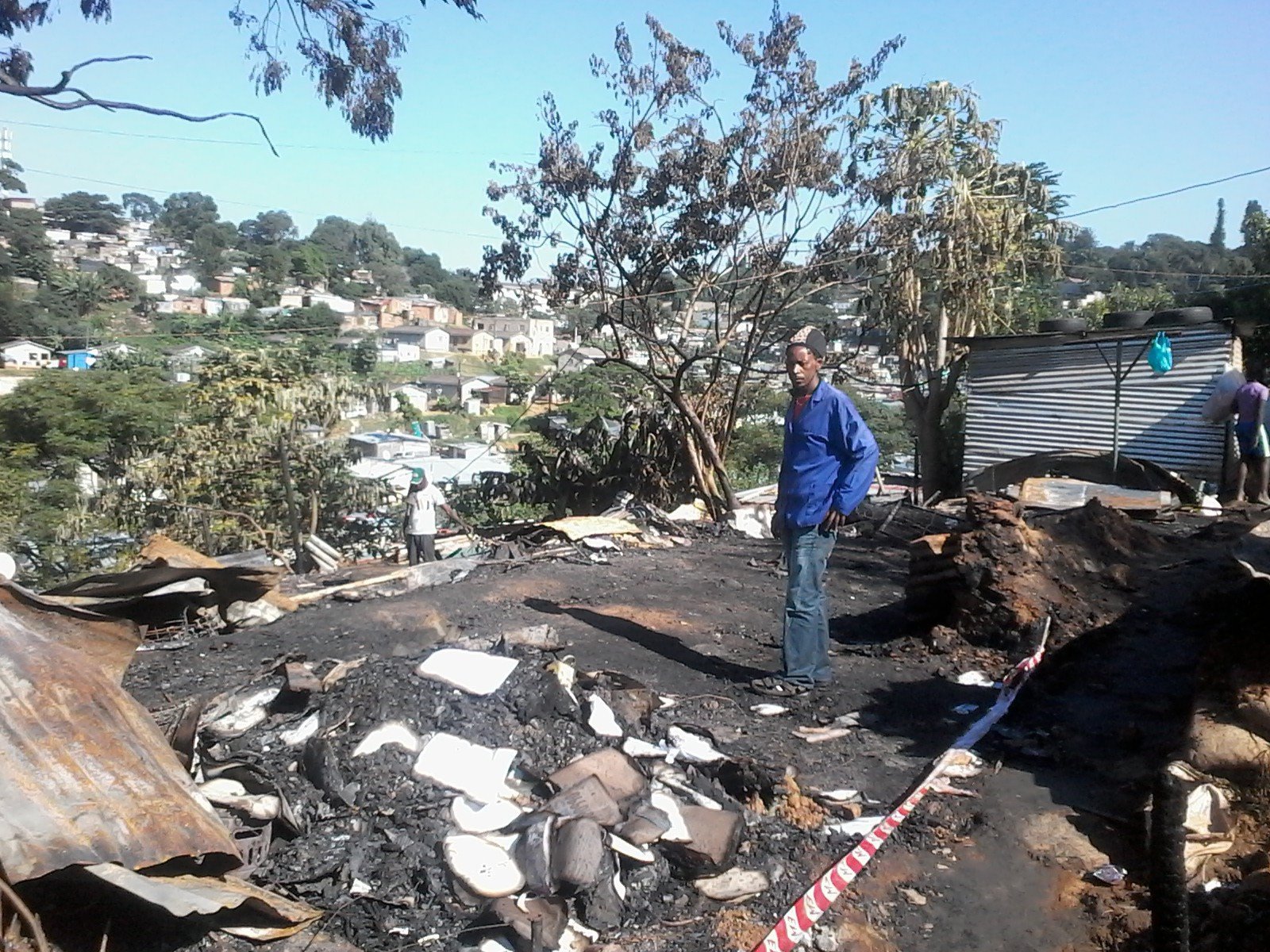 Thanduxolo Scwebu points out where the charred remains of Nomasamson Dlamini were found after the fire was extinguished on Sunday. His 16-year-old son, Cebo Mpiliso, also sustained serious burn wounds in the blaze. (Photo: Nokulunga Majola)

KwaZulu-Natal fire victims say they are likely to spend a second night outside because they don’t have the materials to rebuild their homes.

Nomasamson Dlamini, 38, was killed and a teenager sustained serious burns on his arms, legs and head during a fire that destroyed 49 shacks at Marikana informal settlement in Cato Manor on Sunday.

Residents recalled being woken up to the desperate screams of a woman in the early hours of Sunday morning. Relatives of Dlamini said that she had been burned beyond recognition and speculated that the fire was started outside her shack.

The area where the fire took place is known as the Nqobile section. It is named after the late Nqobile Nzuza who was shot and killed by a police officer during a protest against evictions.

Nomasamson’s sister, Busisiwe Dlamini, said, “My other sister came to my house to tell me that something had happened to our older sister. She didn’t tell me straight away that she had died. When we got to the settlement they told me that my sister had passed,” said Dlamini.

“I have to travel back home to Lesotho to get anything that can prove her identity since everything she owned was destroyed in the fire — all her documents including her ID and passport — before we can commence with the funeral arrangements,” she said.

Nomasamson is the oldest of six children. Her two children live with her family in Lesotho. Her sister explained that she moved to Durban in 2010 and had been living at Marikana since 2013. Dlamini said she needed R600 to travel to Lesotho to get identification for her sister.

“It hurts to know that my sister suffered. I can’t imagine what she was going through especially since no one was able to help her. We won’t be able to see her, her children will only see her coffin,” said Dlamini.

Thanduxolo Scwebu, father of 16-year-old Cebo Mpiliso who was injured in the fire, said his son had leapt into action to warn them of the blaze. “He was sleeping in another room in our three-room shack and he called us to get out. I managed to get my wife, and three other children out who were sleeping in the same room as me, but I couldn’t get to Cebo. I had to find another way to get him out but he was already injured by that time,” he said.

Scwebu, who lives next to Nomasamson, said they tried everything to save her. He said his son had been discharged from hospital and was recovering at a relative’s house. “We lost everything. I didn’t even go to work today because I have no clothes and my children cannot go to school. All their study material was destroyed,” said Scwebu.

Another resident whose shack was burnt, Zanele Juqu, 48, said they had to sleep outside because most of them don’t have material to rebuild. The residents will probably sleep outside again on Monday night, she said.

“Everything we owned was destroyed in the fire. We have nothing and don’t even know where to begin,” said Juqu who lives with her two daughters and two grandchildren.

Siphokuhle Makhwenkana told GroundUp that illegal connections were a problem in the community. He said people were tired of waiting for the City to electrify the settlement.

He confirmed that the City’s disaster management team had taken down a list of names of the people who were affected by the fire.

KwaZulu-Natal police spokesperson Captain Nqobile Gwala said an inquest docket was being investigated by Cato Manor police. The cause of the fire was not known, Gwala said.

Deputy president of Abahlali baseMjondolo, Mqapheli Bonono, said, “It is sad that people have to live in fear because of fires. My question to eThekwini Municipality is how many people should die before they electrify all informal settlements, provide water and toilets to all residents?” Bonono asked.

eThekwini Municipality spokesperson Msawakhe Mayisela said that illegal connections continue to be an albatross around the City’s neck. She said the City lost R70-million in electricity theft in the past year. “This is a serious concern for the City as illegal connections are overburdening the grid which to a larger extent results in our infrastructure malfunctioning. Bearing testimony to that are the numerous incidents where our transformers had burst resulting in many homes being plunged into darkness,” she said. DM