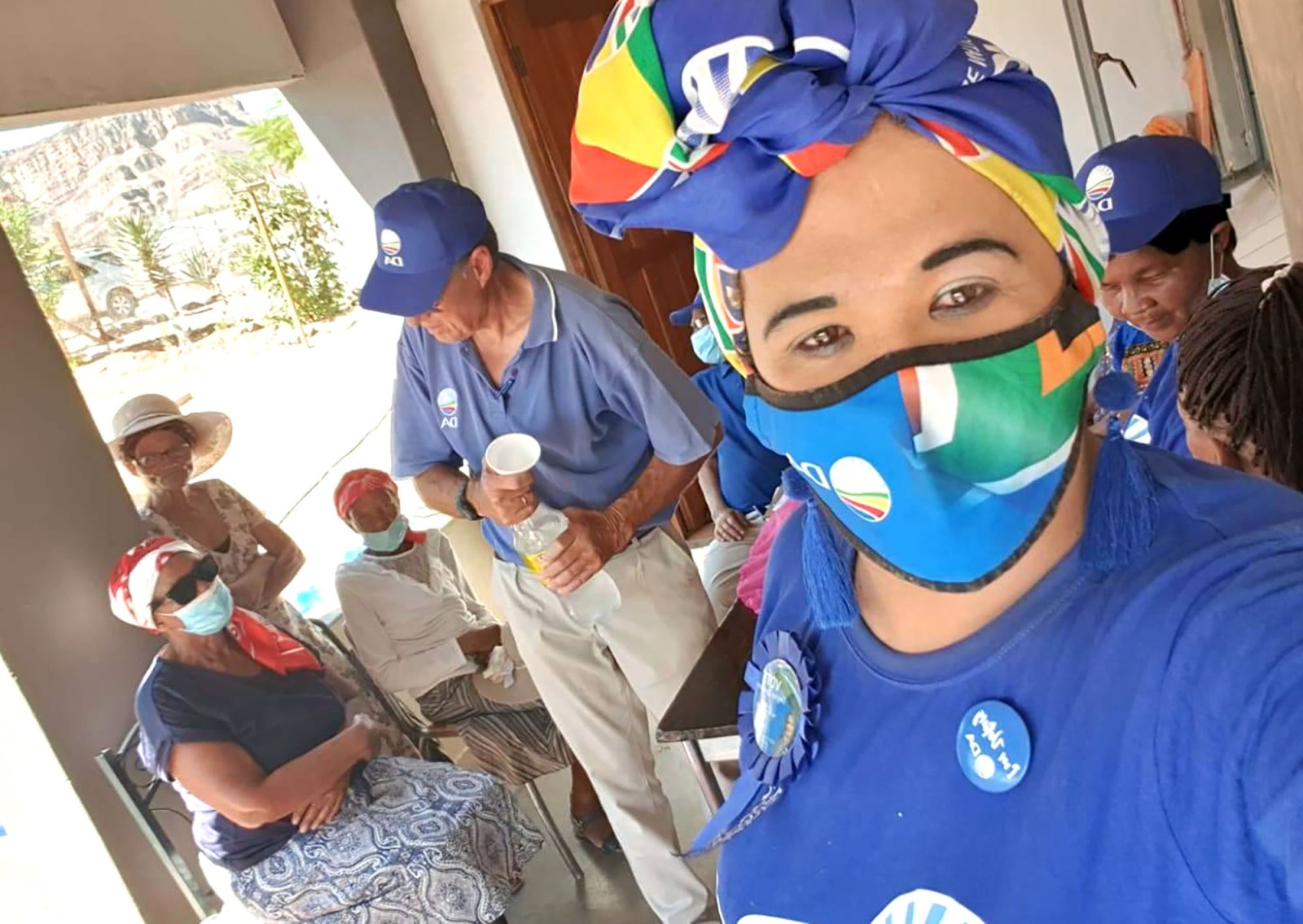 Deonay Balie is an LGBTQI+ rights activist and teacher who has also acquired national prominence after she became the first transgender person to be cast on a South African soapie, playing the transgender character of Geneviève on 7de Laan, in 2017. Now Balie has added ‘politician’ as another notch in her belt, and is the DA candidate for the Nama Khoi (Steinkopf) by-election in the Northern Cape, taking place on Wednesday, 21 April.

Born and raised in the small town of Steinkopf, north of Springbok on the N7, Deonay Balie (31) said she intends to use her platform as a means to “put back into the community” and also advocate the rights of LGBTQI+ people.

The Nama Khoi Municipality is one of three Northern Cape municipalities where the ANC does not have an outright majority and is governed in coalition with the small Khoi Revolution Party (KSR), which is not running in this by-election.

Elections analyst Wayne Sussman described it as a “high-stakes by-election”, where the ANC and KSR have a majority of one and the DA are the official opposition.

The majority of voters in the ward are in Steinkopf, said Sussman.

Sussman described Steinkopf as a “poor community, with a high level of unemployment” and very few economic opportunities.

Being progressive and a younger candidate, Sussman believes Balie “is going to try to appeal to youth voters”.

According to Sussman, the ANC used South African soap actors to win over Nama Khoi voters in a by-election a few years ago. This move helped “swing” the ward from the DA to the ANC — making it clear that soap actors and actresses certainly have currency in this region, he said.

Balie echoed Sussman’s remarks, and told Daily Maverick that there are a number of celebrities who have roots in Steinkopf. She mentioned  Tholwana Mohale, who won SA’s Got Talent in 2014, as an example.

But unlike many of the celebrities who left the area after achieving stardom, Balie has remained in Steinkopf, only leaving briefly to study tourism management at Cape Peninsula University of Technology in Wellington, and later to teach at a school in Bloemfontein.

After being scouted on Facebook and asked to audition by the producers, Balie was cast as Geneviève in 7de Laan, and had started her short stint with the soapie in February 2017.

Born in 1990, Balie described Steinkopf as “very conservative” and “community orientated”. According to Balie, the era of her upbringing in the town was one “where people weren’t as exposed to the LGBTQI+ community as they are today”.

Despite having a good family structure, Balie said her mother, being a staunch Christian woman who was also “very opinionated”, initially did not understand Balie’s decision to transition when she was 25 years old.

“I knew if I came out as trans I would lose some friends, some family [and] I would maybe lose some respect from people in the community. But at the end of the day, it’s about my happiness,” Balie told Daily Maverick.

However, after realising she was happy, Balie’s mother began to accept her for who she was, she said.

Balie, who uses her platform to vocalise the struggles experienced by LGBTQI+ people, said she believes “her story is activism”.

“Just standing in this by-election is a form of transgender activism for me,” said Balie.

Community leaders, councillors and local politicians have an obligation to ensure that vulnerable and marginalised people are safe, she said.

Balie said she sees herself not as a politician but as a community member who wants to make a difference in her community.

“I do not see myself necessarily as a leader in the community, but just someone who’s taking the lead,” she told Daily Maverick.

According to Balie, more LGBTQI+ representation is needed in South African politics in order for the concerns of LGBTQI+ people to be adequately addressed.

It’s important to have “strong, openly LGBTQI+ voices” in political parties in South Africa, “who are able to openly advocate LGBTQI+ issues and for human rights related to sexual orientation, gender identity and expression, and sex characteristics (SOGIESC),” said Smit.

Although Balie is not the first transgender DA candidate, there are few openly LGBTQI+ people in political parties in South Africa, and even fewer who are elected or who hold prominent roles within parties, said Smit.

In 2018, Triangle Project published research on the inclusion of LGBTQI+ people in South African political parties.

The research found that despite LGBTQI+ people making up a significant constituency of voters in South Africa, and wanting to participate in politics “LGBTQI+ are not well represented within political parties”, said Smit.

According to Smit, although there has been “increased willingness” by the government and political parties to address LGBTQI+ issues, it is still not enough and a “significant lack of knowledge and ignorance” surrounding the LGBTQI+ community still exists.

Triangle Project has been running a political participation programme for LGBTQI+ people since 2017, with the aim of training young LGBTQI+ in political campaign skills.

Advocating the rights of LGBTQI+ people is an “ongoing struggle”, said Balie.

Balie said: “We are a continent that is known for its compassion. But how far does our compassion go? Does it just go up to a certain race, or class, or religion, or gender or sexuality? Or is it really without boundaries?” DM