Pretoria set to sit on the fence when the West punishes... 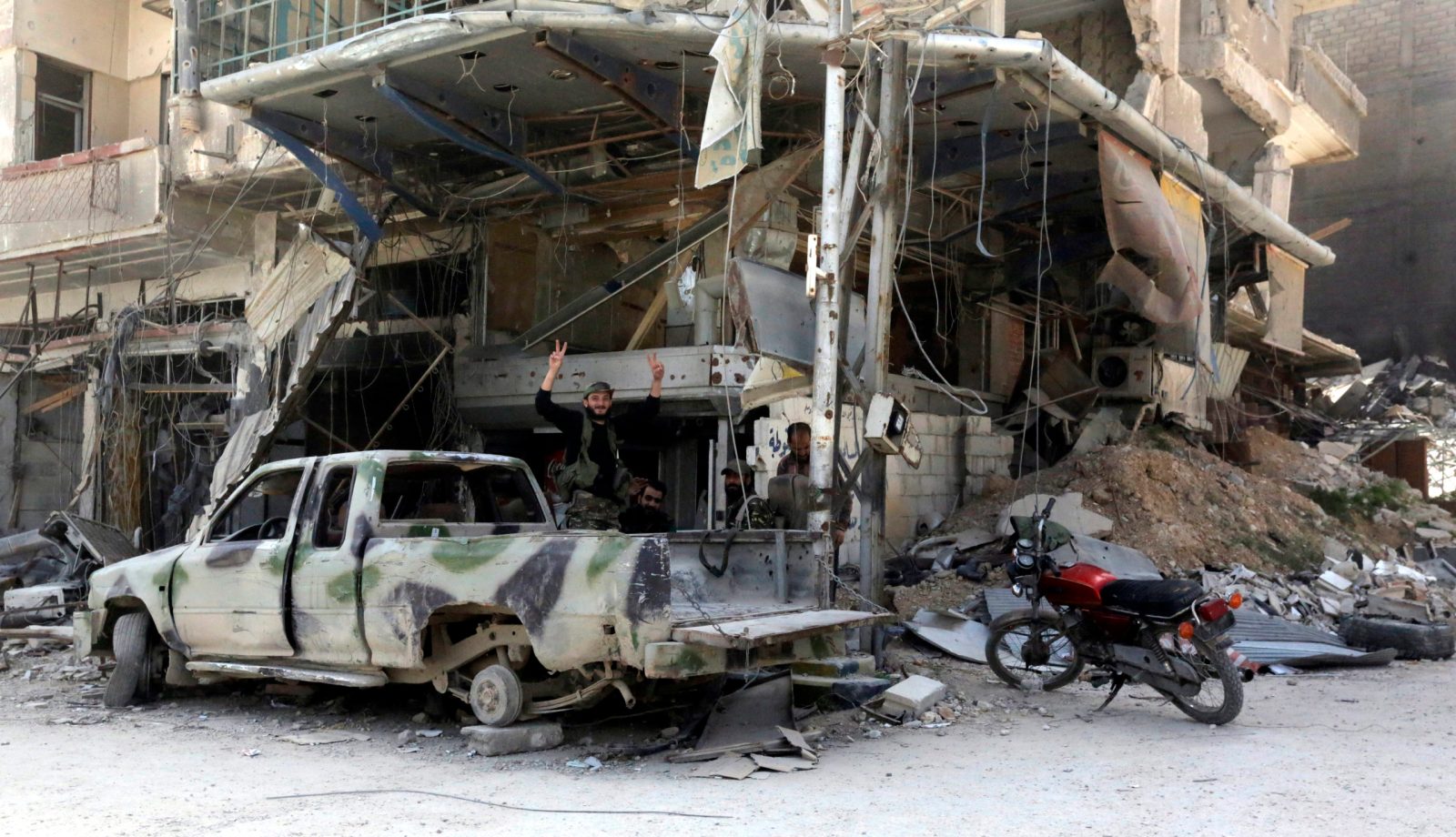 Syrian Army soldiers gesture at the recently-recaptured Douma city, in Eastern Ghouta, the countryside of Damascus, Syria, 20 April 2018. According to media reports, the Syrian army had seized control on the city after driving Jaysh al-Islam fighters out of it to Jarablus city in the countryside of Aleppo. The reports said that Organization for the Prohibition of Chemical Weapons (OPCW) fact-finding mission has entered the city to investigate claims about the alleged use of chemical weapons in the city. EPA-EFE/YOUSSEF BADAWI

South Africa is likely to abstain from an attempt by Western governments this week to suspend Syria’s voting rights in the world’s chemical weapons watchdog body.

France, supported by 45 other states, will probably table a resolution to punish Syria at the Conference of Parties of the Organisation for the Prohibition of Chemical Weapons (OPCW) which starts on Tuesday at The Hague.

France and the supporters of the resolution accuse Syria of failing to explain apparent evidence of several instances of chemical weapons use or production.

Syria joined the OPCW in 2013, two years into a civil war, declaring its past chemical stockpiles and chemical weapons sites, but insisting that it had destroyed them all.

It failed to do so, which prompted France to launch its resolution to suspend Syria’s rights and privileges in the OPCW, including its right to vote. In a briefing to the UN Security Council this month, UN disarmament chief Izumi Nakamitsu said Damascus’s declaration of its chemical stockpiles and chemical weapons production sites in 2013 remained incomplete, with 19 issues outstanding.

France’s resolution is strongly backed by Western nations in particular, including the UK and US. Russia strongly opposes the resolution, accusing France and other Western powers of politicising the OPCW to use it as a weapon against Syria, Russia’s ally.

Russia itself has twice been investigated by the OPCW for alleged use of chemical weapons. In 2018, the UK accused Russia of ordering the poisoning of former Russian intelligence agent Sergei Skripal, who had defected to Britain.

Skripal and his daughter Yulia survived the poisoning, but Dawn Sturgess, who had accidentally imbibed the poison, died. Britain said Moscow had to be responsible because the poison used was the nerve agent Novichok, which only Russia possessed.

He was flown to Germany where he was treated and recovered. However, Navalny was arrested on his return to Russia and is now in a critical condition and has been moved to a prison hospital after three weeks of a hunger strike.

The French resolution to suspend Syria’s OPCW voting rights has apparently created a dilemma for South Africa, which will attend this week’s Conference of the States Parties as one of 193 signatories of the Chemical Weapons Convention which the OPCW enforces.

On the one hand, Pretoria feels it cannot vote against France’s resolution because that would condone Syria’s acknowledged failure to cooperate with the OPCW and could be seen therefore as condoning the use of chemical weapons, which South Africa strongly opposes.

On the other hand, Pretoria feels that the OPCW has not exhausted all possibilities for engaging Damascus on its failure to explain its apparent non-compliance with the Chemical Weapons Convention.

Sources told Daily Maverick that so far Syria had only failed to cooperate with the technical committee of the OPCW secretariat which had investigated the apparent discrepancies in its declarations. Pretoria felt that the OPCW member states themselves should now engage with Syria to seek its compliance before any action was taken against it.

The sources said they were aware that in taking this position Pretoria would be suspected by some of hiding behind procedure to shield Syria from punishment — and to please Russia, a mutual ally of Syria and South Africa.

But they insisted there was a substantial issue at stake behind the procedural question. Syria had only grudgingly joined the OPCW in 2013 and might very well leave the watchdog body if its voting rights were now suspended. That would significantly impair the international community’s ability to monitor Syria’s compliance with the Chemical Weapons Convention.

It is better to have Syria in the OPCW — even if not fully cooperating — than to have it out, is Pretoria’s basic argument.

This is why Pretoria is likely to abstain from the vote on France’s resolution. DM