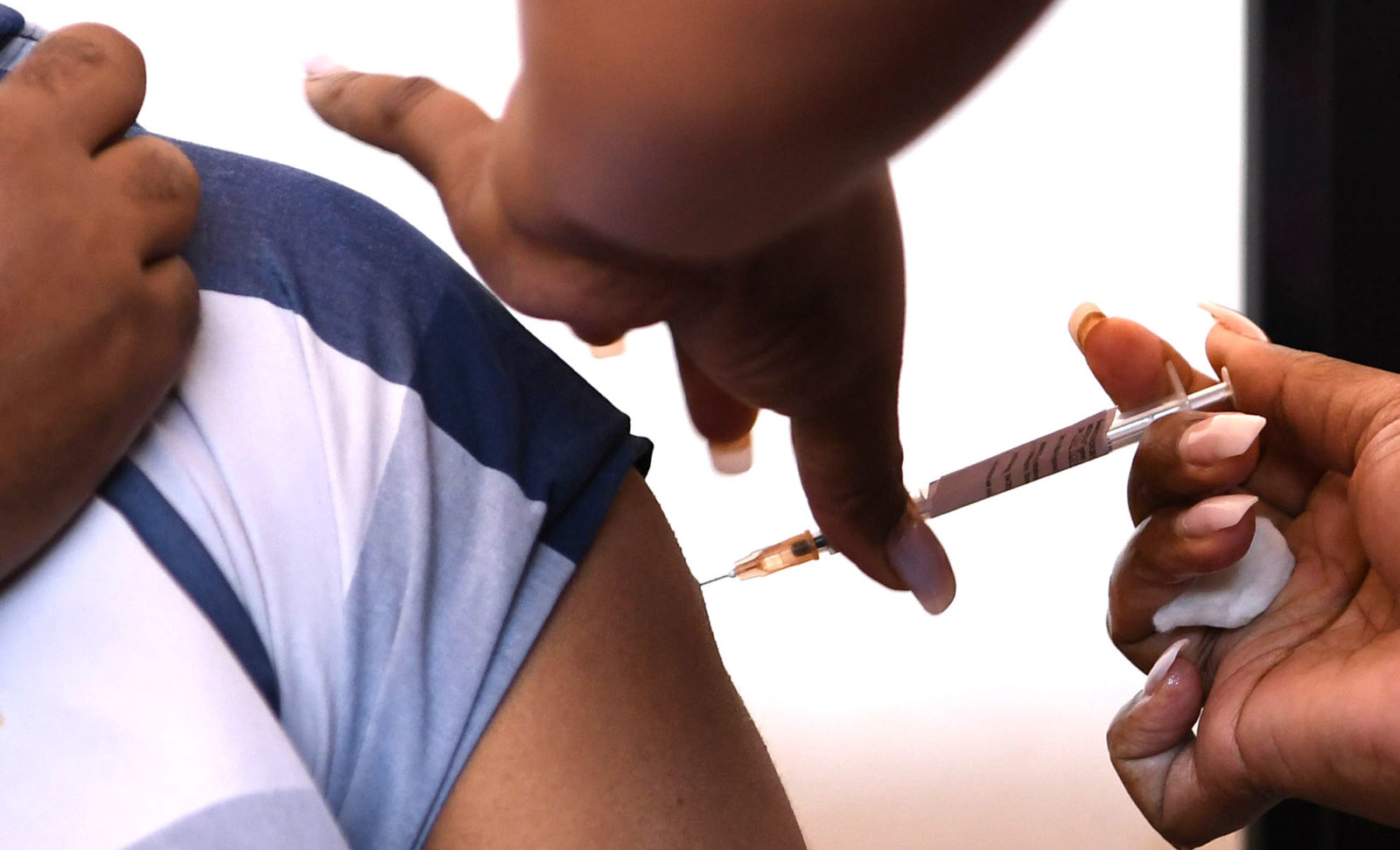 Shipments of Johnson & Johnson’s Covid-19 vaccine will be restarted to the European Union after the bloc’s drug regulator said benefits of the shot outweigh the risks of a possible link to cases of rare blood clots.

Hungary, the country with the world’s highest Covid-19 death rate, reported data showing the virus has peaked, according to its chief medical officer. Italy aims to open the country to visitors in mid-May, pledging a range of safety measures as it scrambles to rescue the devastated tourism industry.

Toronto health authorities will order workplaces across Canada’s biggest city to close if they have more than five confirmed cases of Covid-19. Elsewhere in Canada, Manitoba and the US state of North Dakota have undertaken a joint initiative to vaccinate truck drivers transporting goods to and from the US.

Colorado’s fourth wave of Covid-19 is intensifying, with hospitalisations reaching the highest since the end of January at 553, Governor Jared Polis said at a Tuesday news conference.

Most patients admitted to Colorado hospitals are between 20 and 50, a “concerning trend,” said Rachel Herlihy, state epidemiologist. The state has opened four on-demand vaccine sites to reverse the trend.

Toronto health authorities will order workplaces across Canada’s biggest city to close if they have more than five confirmed cases of Covid-19.

The decision on Tuesday overrides less-stringent provincial orders, and follows a similar move by Peel Region, a western suburb. It comes as the city struggles to contain a surge in variant cases that threatens to collapse the local healthcare system.

North Dakota and the province of Manitoba have undertaken a joint initiative to vaccinate Canada-based truck drivers transporting goods to and from the US. The arrangement was announced by North Dakota Governor Doug Burgum and Manitoba Premier Brian Pallister, who said it was the first such programme between a Canadian and US jurisdiction.

Manitoba will identify and coordinate with eligible individuals and work with North Dakota to schedule vaccination appointments for truck drivers during their routine trips to the US over the next six to eight weeks. It is estimated that roughly 2,000 to 4,000 Manitoba drivers will take part in the programme.

“With adequate vaccine supplies and all North Dakotans having access to vaccine while Canada is dealing with a vaccine shortage, we want to do our part to ensure essential workers from Canada who are frequently travelling through our state are vaccinated,” Burgum said in a statement.

“The timely and effective administration of vaccines is essential for public health and the eventual safe reopening of our shared border.”

Netherlands to lift some restrictions

The Netherlands will ease some lockdown restrictions starting next week, though conditions will be attached to the amended measures as the country’s health system remains hard-hit. A hotly debated nighttime curfew, which triggered riots when first implemented, will end on April 28, caretaker Prime Minister Mark Rutte said during a press briefing on Tuesday evening.

Taking a first step in lifting some restrictions is “a balancing act” that will involve taking some risks, he said. Other relaxed measures include shops that will be allowed to welcome a limited number of consumers without an appointment until 8pm, and outdoor bar seating that will reopen between noon and 6pm, with a maximum of 50 people per area.

US House Democratic Whip James Clyburn said he’s concerned about the track record of Emergent BioSolutions, a manufacturer expected to produce Johnson & Johnson’s Covid-19 vaccine at its Baltimore plant, and has launched an investigation into how the company came to be awarded its federal contracts.

Two House panels, including one that Clyburn chairs, launched an investigation on Monday into whether Emergent officials leveraged a relationship with a Trump administration official to profit from federal contracts, and whether the company’s actions impeded the US pandemic response. Clyburn has requested testimony from Emergent executives.

Johnson & Johnson will restart shipments of its Covid-19 vaccine to the European Union after the bloc’s drug regulator said the benefits of the shot outweigh the risks of a possible link with cases of rare blood clots.

The European Medicines Agency assessment on Tuesday echoed that of the vaccine from AstraZeneca, which has also been linked with the rare clot. In both cases, the regulator said Covid can be fatal and the use of vaccines is crucial to fighting the virus.

Arvind Kejriwal, the chief minister of India’s capital, took to Twitter on Tuesday to plead for oxygen supplies from the federal government as the country reels under a ferocious second wave of virus infections.

“We are getting SOS calls from hospitals for oxygen,” Sisodia said on Twitter. The city reported nearly 24,000 new infections on Monday, forcing the government to order a lockdown for the next six days.

Kejriwal has repeatedly drawn attention to the fact the city is running out of hospital beds, oxygen and crucial drugs as infections continue to surge.

There are at least eight known cases of the Indian variant in Israel, and two more possible cases, Hezi Le

While the variant seems to have characteristics that make it more resistant to vaccines, the shots will still work against it, though less efficiently, Levi said. Not enough is known about the variant, he added.

The American Museum of Natural History in New York will operate as a vaccination site starting on Friday, Mayor Bill de Blasio said. The clinic will be open from 8am to 6pm Friday through Tuesday each week, offering about 1,000 shots a day.

“The American Museum of Natural History is an iconic monument to science and discovery,” Health Commissioner Dave Chokshi said in a statement. “Serving as a setting for our historic vaccination campaign is both exciting and perfectly fitting.”

Priority will be given to residents and staff of public housing complexes; as well as union members and museum workers. The site will also offer appointments for the general public.

Saudi Arabia reported 1,070 new cases on Tuesday, the biggest daily jump in eight months, bringing the total number of infections to 407,010. The kingdom recorded 12 new coronavirus-related deaths, raising the total to 6,846, the health ministry said in a tweet.

A health ministry spokesman said the spike is attributable to gatherings and people not observing virus restrictions in all regions as they celebrate the month of Ramadan, a key Islamic holiday that often involves social gatherings.

Hungary, the country with the world’s highest death rate from Covid-19, reported data that showed the virus has peaked, according to its chief medical officer.

Hungary reported 1,645 new infections on Tuesday, the lowest level in almost two months. The number of patients being treated in hospitals has dropped by a third from the end of March, and those on ventilators fell below 1,000 for the first time since mid-March, data show.

Scotland will proceed with its biggest easing of virus restrictions this year as vaccinations reduce the number of new infections and deaths. Starting next week, non-essential shops, gyms and museums will be able to reopen, while cafes, restaurants and pubs can resume the sale of food and drink outdoors, First Minister Nicola Sturgeon said.

A ban on travel between Scotland and England and Wales will also be lifted. More than 60% of Scotland’s adult population has now received a first dose, according to government data.

Tokyo to seek State of Emergency

Tokyo has decided to ask the Japanese government to declare a State of Emergency, Mainichi newspaper reported, as authorities step up restrictions to contain a surge in infections ahead of an Olympics just three months away.

Tokyo Governor Yuriko Koike has told ruling Liberal Democratic Party Secretary-General Toshihiro Nikai she plans to seek the designation for the capital, the report said, without saying where it obtained the information. The city will make the final decision after a virus panel meeting on Thursday, it said. Cases in the city have in recent days surged to levels not seen since late January, when the capital was under its second State of Emergency.

Romania reported 237 coronavirus-related deaths on Tuesday, a daily record. The country’s intensive-care units in Covid-19 hospitals have been consistently full for the past few weeks, according to the government’s virus taskforce. The number of daily infections has stabilised at around 3,000, after more than 2.6 million people received a vaccine and amid a partial weekend curfew in the most-affected towns.

Singapore is reducing entry approvals and extending isolation measures for travellers from India amid an escalation of Covid-19 cases in the country.

Iran aims to speed up its inoculation programme by allocating a further $100-million to buying vaccines, the Central Bank governor, Abdolnaser Hemmati, said in a statement. The new funding will facilitate Iran’s payment for a deal worth $178-million with the World Health Organization to import 16.8 million jabs through the Covax initiative.

Earlier, government spokesman Ali Rabiei said at a press conference that Iran had allocated part of its funds trapped in Iraq due to US sanctions for buying Covid-19 vaccines, without specifying an amount. DM