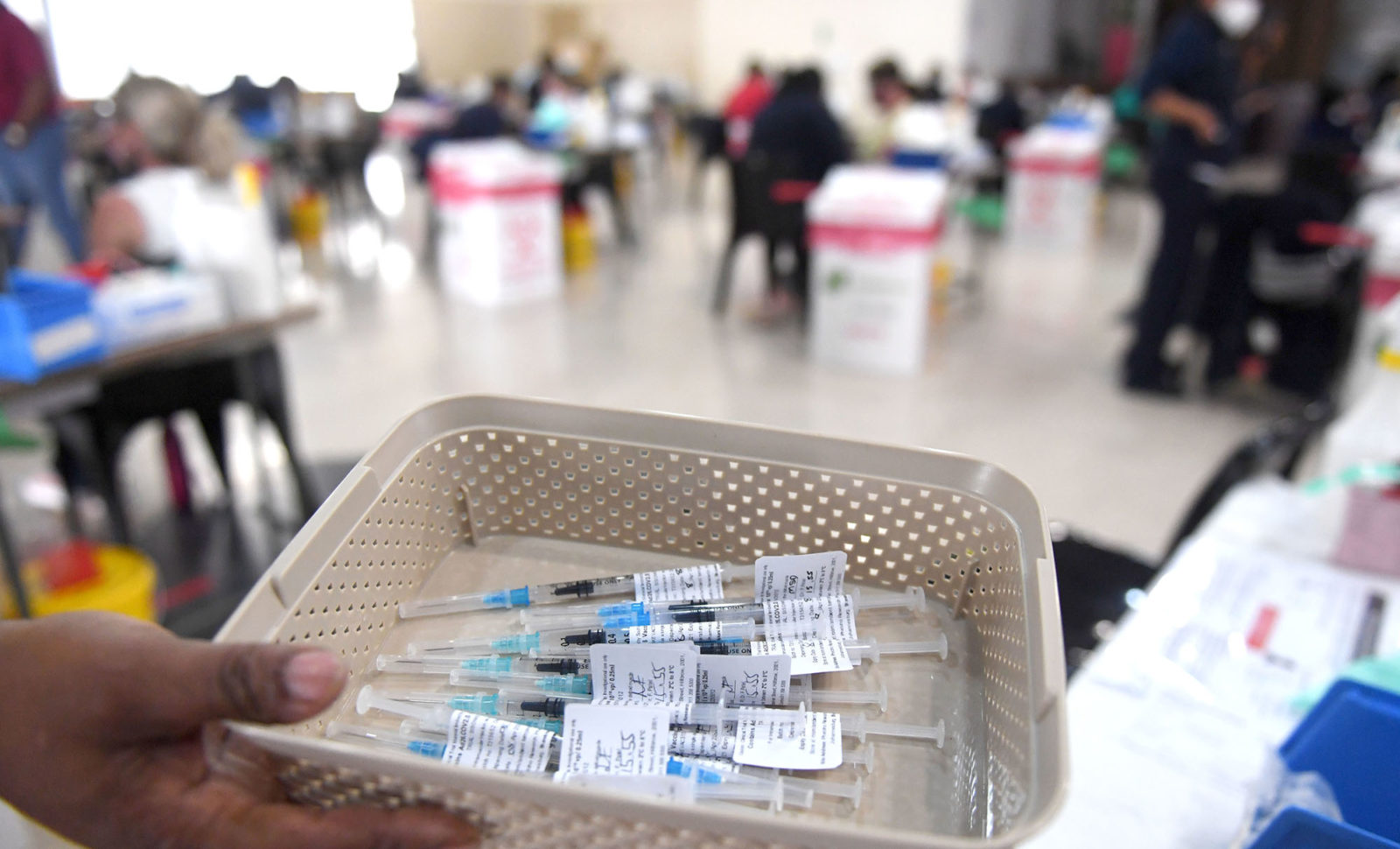 The European Union exercised its option for a further 100 million doses of Pfizer and BioNTech’s Covid-19 vaccine, boosting its order from the companies to 600 million doses. UK Prime Minister Boris Johnson cancelled a visit to India next week amid soaring coronavirus cases in the country and the emergence of a new variant.

The World Health Organization said it’s working intensively to get pre-qualification for Russian and Chinese vaccines. The developer of Sputnik V said a new study shows 97.6% efficacy for the Russian inoculation.

Deliveries of Pfizer’s Covid-19 vaccine to South Africa were delayed by demands from the US drugmaker that it determine the guarantees needed to indemnify the company from any negative effects from the shots.

The condition was resisted by the government and Pfizer eventually backed down, agreeing to supply 30 million doses of the vaccine co-developed with Germany’s BioNTech.

Chile secured deals for third doses of Covid-19 vaccines from Sinovac and Pfizer in the event they are needed in upcoming months, according to a government official.

An additional seven million Sinovac shots and five million from Pfizer would arrive by year’s end if health authorities deem them necessary, Vice Minister of Trade Rodrigo Yanez said in an interview. Officials also want to be ready in the event people under 18 years of age are cleared for the shot, he said.

Chile is forging ahead with one of the world’s fastest vaccination drives that’s already delivered at least one shot to more than 40% of citizens. The deals set it further apart from emerging markets such as Brazil and Mexico that have lagged in their inoculations. Still, the South American nation is struggling to tame a virus surge that sent daily cases to record highs this month.

Greta Thunberg’s foundation has donated €100,000 to Covax, the global initiative to ensure equitable access to vaccines.

“During crises like these, we need to take a few steps back and act for the greater good of society,” she said at a World Health Organization digital media briefing on Monday.

The 18-year-old climate activist argued that the world should prioritise the most vulnerable, whether they live in a rich or poor country. She also condemned Brazilian President Jair Bolsonaro, saying he had “failed to take the responsibility necessary” to safeguard humanity’s living conditions.

New York Governor Andrew Cuomo boosted the capacity at indoor venues as statewide infections continue to decline. Starting on April 26, capacity at museums and zoos will be raised to 50%, and to 33% at movie theatres. On May 19, capacity at large indoor arenas like Madison Square Garden will be increased to 25%.

New York City’s positive test rate for Covid-19 dipped below 5% for the first time in several months as daily vaccinations reached a record, according to Mayor Bill de Blasio.

The seven-day average for positive tests fell to 4.91% as of Friday, below a key public-health safety threshold established a year ago. On the same day, the city set a record for vaccinations with 106,528, bringing the total to 5,746,378 doses to date.

The number of New York state residents who say they don’t plan to get the Covid-19 vaccine dropped to 14% in April from 25% in January, according to a new Siena College poll out on Monday.

Cameroon received 391,212 AstraZeneca doses over the weekend, the first batch out of a total 1.7 million it’s expecting from the Covax facility backed by the World Health Organization, according to Public Health Minister Manaouda Malachie. The central African nation, which has received 592,412 shots so far, is planning to vaccinate at least 15 million people.

Cameroon was one of the last African countries to start vaccinating against Covid-19 after shunning AstraZeneca shots over early concerns about its side effects. It eventually received 200,000 Covid-19 doses from China’s Sinopharm Group on April 11, allowing it to kick-start its inoculation programme.

An analysis of the 3.8 million Russians who received both Sputnik V shots between December and March showed that the vaccine has 97.6% efficacy, the inoculation’s state-run developers said in a statement on Monday.

The data, which compare the infection rate of people who received the shots with the incidence among the unvaccinated population, will be published in a peer-reviewed journal in May, according to the Russian Direct Investment Fund and Gamaleya National Research Centre.

Sputnik V demonstrated efficacy of 91.6% in a preliminary analysis of its Phase 3 study that was published in The Lancet in February.

Coca-Cola’s sales beat expectations in the first quarter as the soda maker said it saw early – though uneven – signs of recovery in demand, particularly in areas with stronger rates of vaccination against Covid-19.

The results hint at a potential rebound as consumers worldwide emerge from more than a year of isolation, a process that is happening at different rates in different countries.

United Airlines Holdings will fly three new seasonal routes to Europe as the carrier tries to capitalise on business in destinations now open to Americans ready to fly internationally.

The carrier said on Monday it would begin flights in July from Newark, New Jersey, to Dubrovnik, Croatia; Washington to Athens; and Chicago to Reykjavik, Iceland. The flights to Greece and Iceland will be daily while the Croatia flight will operate three times weekly. All three will end on October 3.

WHO working on Chinese, Russian vaccines

The World Health Organization is working “very intensely” with the Russian and Chinese authorities to get their vaccines pre-qualified, Director Hans Kluge said in Belgrade after a meeting with Serbia’s health minister.

“In order to get out of the pandemic, we need to accelerate vaccination. We need to increase the production capacity and to expand the portfolio of vaccines,” Kluge said.

UK Prime Minister Boris Johnson cancelled a visit to India next week amid soaring coronavirus cases in the country and the emergence of a new variant which scientists fear could prove partly resistant to vaccines.

The prime minister faced growing pressure to both cancel the trip and put India on the UK’s travel ban list, after health authorities confirmed last week that Britain had 77 cases of a new variant first identified in the country. A decision to add India to the so-called red list is expected as soon as Monday, Times Radio reported.

India now has the world’s fastest-growing Covid-19 case load, adding 273,810 new infections and 1,619 deaths on Monday, leaving it behind only the US in terms of total numbers.

The EU exercised its option for a further 100 million doses of the Pfizer-BioNTech vaccine as part of a purchase agreement the 27-nation bloc signed in February.

The boost makes the EU deal the partners’ biggest yet, and they’ll aim to deliver all the doses this year, Sean Marett, BioNTech’s chief business and commercial officer, said in a statement. Pfizer and BioNTech last week agreed to accelerate Covid vaccine deliveries to the EU by 25% this quarter, bringing forward shipment of 50 million doses that had originally been scheduled for the fourth quarter.

“We’re still counting on this vaccine,” he said on Europe 1 radio on Monday. Confidence “must be rebuilt, without a doubt”. Independent scientific studies show that for people over 55 “there aren’t any risks and the vaccine is safe and effective”, he said.

Malaysia will begin the third phase of its Covid immunisation programme in June, when it expects to receive more vaccine supplies, Science, Technology and Innovation Minister Khairy Jamaluddin said in a briefing on Monday.

Malaysia is scheduled to receive 1,038,960 doses of the Pfizer vaccine and 500,000 doses of the finished Sinovac vaccine from China in May. The country was to begin the third phase in May. Phase Three involves migrants, refugees, and individuals 18 years old and above.

Thailand reported 1,390 new infections on Monday, taking the nation’s total infections to 43,742. A flare-up in cases from an outbreak which began at the start of April has infected a total of 14,851 people, according to Apisamai Srirangsan, a spokeswoman for the Center for Covid-19 Situation Administration.

“New infections are dropping due to the public’s cooperation in staying home and avoiding unnecessary travel, but they may spike again if we don’t receive cooperation from the public,” Apisamai said.

Italy has held discussions with Moderna, Novartis and ReiThera about domestic production of mRNA-based shots, the Financial Times reported, citing unidentified people familiar with the matter.

The talks with Novartis and ReiThera included the option of manufacturing mRNA vaccine developed by CureVac in Italy, the newspaper said, and the talks between Novartis, ReiThera and the Italian government were at an early stage.

Novartis, ReiThera, Moderna and CureVac declined to comment to the newspaper.

Osaka to seek State of Emergency

Osaka Governor Hirofumi Yoshimura said the Japanese prefecture will formally decide on Tuesday to make a request to the central government to declare a State of Emergency over the virus.

The Philippines will resume the use of AstraZeneca’s coronavirus vaccines on individuals under 60 years old. The Southeast Asian nation’s Department of Health will issue new guidelines on the vaccine’s use, Undersecretary Maria Rosario Vergeire said at a virtual forum.

In-person school attendance in the Latin American country’s capital was set for suspension for two weeks starting on Monday.

More people around the world were diagnosed with the coronavirus during the past seven days than any other week since the virus emerged, topping 5.2 million globally, according to data from Johns Hopkins University. The worst outbreaks are gaining speed in many countries that are ill-equipped to cope.

The data also showed a 12% increase in cases from a week earlier, throwing doubt on hopes that the end of the pandemic is in sight. DM

Dogs learn how to control the strength of their bites as puppies. This is because biting too hard interrupts playtime.