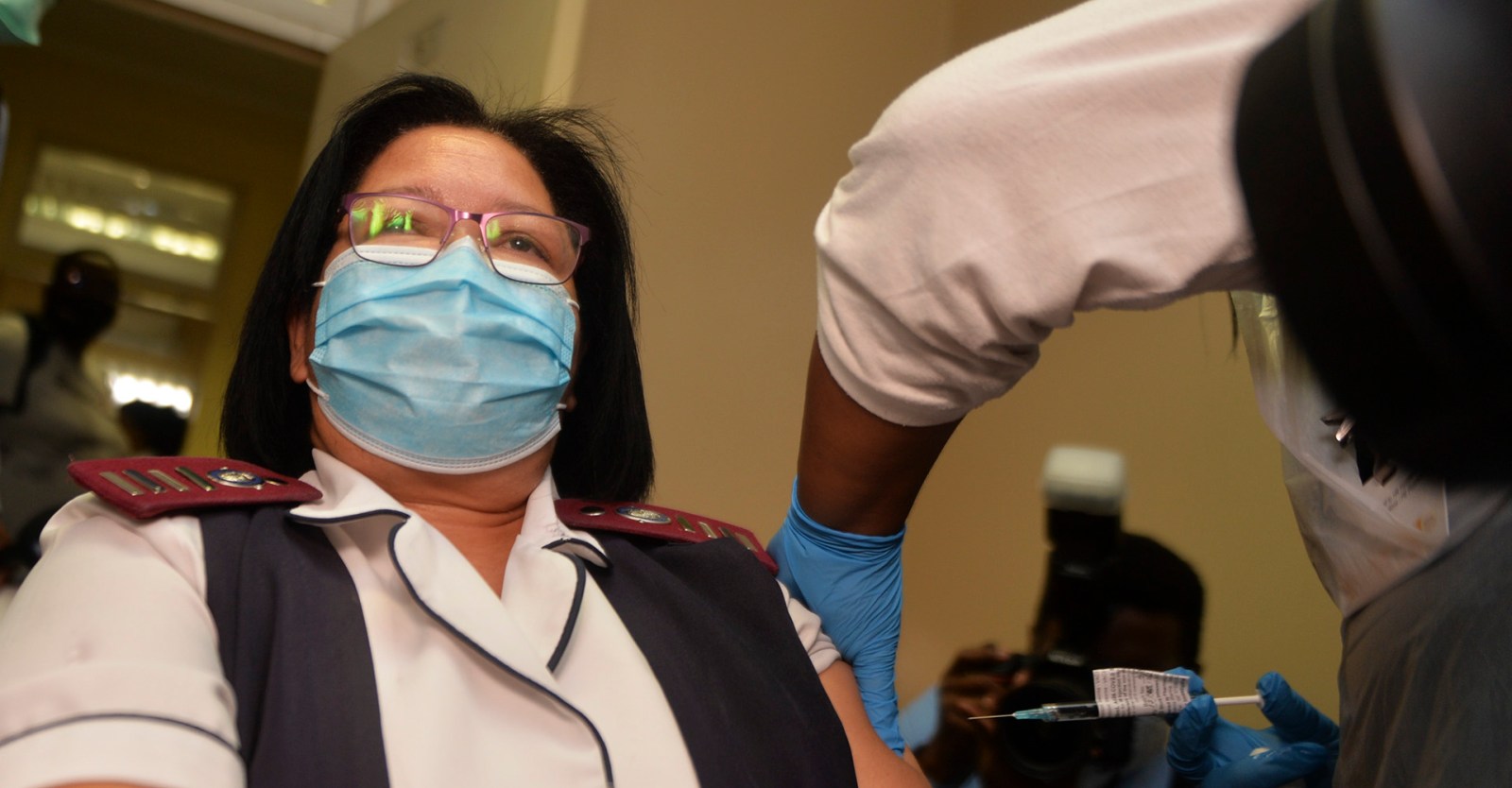 Sister Miranda Ludick, the operations manager for the surgical ward at Livingstone Hospital in the Eastern Cape, was one of the first recipients of the Johnson & Johnson vaccine in the province. (Photo: Deon Ferreira)

While the Eastern Cape, a province especially hard hit by the second wave of coronavirus infections, has been reporting a steady uptick in cases since the Easter weekend, no new infections have been reported among health workers in five districts.

No new coronavirus infections and no new deaths have been reported among health workers in five of the Eastern Cape’s districts, with hospital admissions also hitting a plateau, according to the province’s latest epidemiological report.

The Sisonke Protocol, allowing health workers early access to the Johnson & Johnson vaccine, was initially rolled out to two centres in the province, but the number of centres was later increased.

Eastern Cape health department spokesperson Sizwe Kupelo said that when the Sisonke trial was suspended, they had vaccinated 34,407 health workers in the province in both the private and public sectors.

According to the latest epidemiological report issued by the province, there are now 243 cases of Covid-19 in the Eastern Cape, with most occurring in Nelson Mandela Bay. The province still has a 5.8% case fatality rate and reported another 12 deaths on 16 April. The new numbers represent an 18% increase. About 30 new cases are reported a day, with 30% of hospitalised patients dying.

A week after the first vaccinations in the province, the hospitalisation of health workers plateaued and it has not increased since. According to the report, 11,941 healthcare workers had been infected with the coronavirus and 307 had died.

Last week, no new infections of health workers were reported in five districts, including the province’s biggest metro, Nelson Mandela Bay, the Sarah Baartman district — which had the highest fatality rate for health workers in the province — and three others.

The use of the vaccine was suspended last week (13 April) following a similar move by the Food and Drug Administration (FDA) in the United States.

The reason for the suspension, given by both the FDA and Health Minister Dr Zweli Mkhize, is to give authorities a chance to re-evaluate a possible causal link between the vaccine and six cases in the US where women developed blood clots in the brain, coupled with low platelets.

The South African Medical Research Council described this rare side-effect in an update for health workers:

“This syndrome was first described in March following administration of the AstraZeneca-Oxford vaccine in the United Kingdom and Europe. People affected by it have presented with blood clots in large veins draining the brain (cerebral venous sinus thrombosis) and abdomen (splanchnic vein thrombosis) and not in the places where clots usually form, like the leg or chest.

“Cases have been characterised by low levels of platelets — a component of your bloodstream that assists with clotting and the prevention of bleeding. Cases do not present immediately, but rather between four to 20 days after vaccination. This is thought to be because the vaccine has triggered antibodies to a substance that assists platelets to function.

“Symptoms of a cerebral venous sinus thrombosis (CVST) include a severe, unrelenting headache, often associated with blurred vision, difficulty speaking, weakness on one side of the body and vomiting.

Around five cases of CVST per million population, unrelated to vaccination, occur in the general population, often in younger women, associated with contraception and smoking.

“Splanchnic vein thrombosis presents with persistent abdominal pain and vomiting and is exceedingly rare in the general population. Some people have also reported bleeding and noted small blood spots around the site of their injection.”

At the weekend, the South African Health Products Regulatory Authority said that the vaccinations under the Sisonke Protocol can continue if a number of conditions are met.

“SAHPRA has engaged with the Sisonke Phase 3B implementation study team and Janssen Pharmaceutica. The focus of the engagement was on the safety data reported from the Sisonke study, following the administration of the Covid-19 vaccine Janssen, as well as the adverse events reported in the United States of America.

“Based on their review of the available data, SAHPRA has recommended that the pause in the Sisonke study be lifted, provided that specific conditions are met.

“These conditions include, but are not limited to, strengthened screening and monitoring of participants who are at high risk of a blood clotting disorder. In addition, measures are to be implemented to ensure the safe management of any participants who develop vaccine-induced thrombosis and thrombocytopenia (low platelets). The participant information sheets and informed consent forms will be updated to include the newly identified adverse events.

“Participants in the Sisonke study will be informed about the possible risks of developing a blood clotting disorder after vaccination. They will also be advised to seek immediate medical assistance if they develop early signs and symptoms associated with blood clots or low platelet counts. The study team will submit the required updated documents, procedures and study arrangements to SAHPRA for approval.”

SAHPRA added that approval from the relevant research ethics committees will be needed before the trial can resume.

Providing an update on the trial, the South African Medical Research Council, whose president, Prof Glenda Gray, is the lead investigator in the Johnson & Johnson trial, said there was “no reason for widespread concern”.

“This is an extremely rare complication affecting between one and four per million people who are vaccinated. It is important to be educated about the side effects, seek care urgently if they happen, disclose your vaccination status and ask your doctor to be immediately in touch with the Sisonke team so that they can guide them to treat you effectively,” the Medical Research Council said.

“The J&J vaccine continues to provide much hope to South Africans, with local data collected during our second wave showing it provides 82% protection against severe disease. “

“Headache is a common side effect of the vaccine in the first three days. The headache from cerebral venous sinus thrombosis due to vaccine-induced thrombocytopenia thrombosis (VITT) has only been reported four days or more after vaccination (most commonly nine days) and is extremely severe and unrelenting.

“Routine screening tests, like checking your platelets before or after vaccination, are not recommended in the absence of symptoms, and neither is preventative treatment with blood thinners, specifically rivaroxaban. We encourage all vaccinees to continue to take their usual medications, including any blood thinners or contraceptive pills you may already be taking.

“Covid-19 represents the most difficult health challenge of our time. It is highly infectious, has crippled the global economy, killed more than three million people and left millions of people with long-term consequences.

“Vaccines remain one of the most effective solutions we have in mitigating an end to the pandemic, and we welcome the extension of registration on EVDS to Phase 2 recipients today.

“Extremely rare side effects are unavoidable when tens of millions of vaccines are provided, but systems are in place to detect these early, assess risk factors and guide treatment.

“The risk of clots from Covid-19 itself is extremely high, and higher rates of blood clots are seen with medications we use daily, like contraception, and with other conditions such as obesity, diabetes and cardiovascular disease as well as smoking, compared with VITT.

“It can be frightening to hear of such a serious side effect, even if extremely rare, and temporary pauses in roll-out can lead people to doubt vaccines. We note that some countries like France and Poland have weighed the risks and chosen to continue to provide the Johnson & Johnson vaccine while this rare side effect is considered.

“The United States has suspended use of the Johnson & Johnson vaccine for now, but in a context where 37% of their population have already received one vaccination, and where alternatives are readily available.

“As with the FDA in the United States and the EMA (European Medicines Agency) in Europe, SAHPRA is working with the Sisonke team around the clock to ensure that all appropriate precautions are taken before allowing vaccination with the J&J vaccine to resume within a matter of days.”

“The J&J vaccine continues to provide much hope to South Africans, with local data collected during our second wave showing it provides 82% protection against severe disease.

“We remain fully committed to protecting as many healthcare workers as possible, so that they can in turn care for and vaccinate the people of this country.” DM/MC