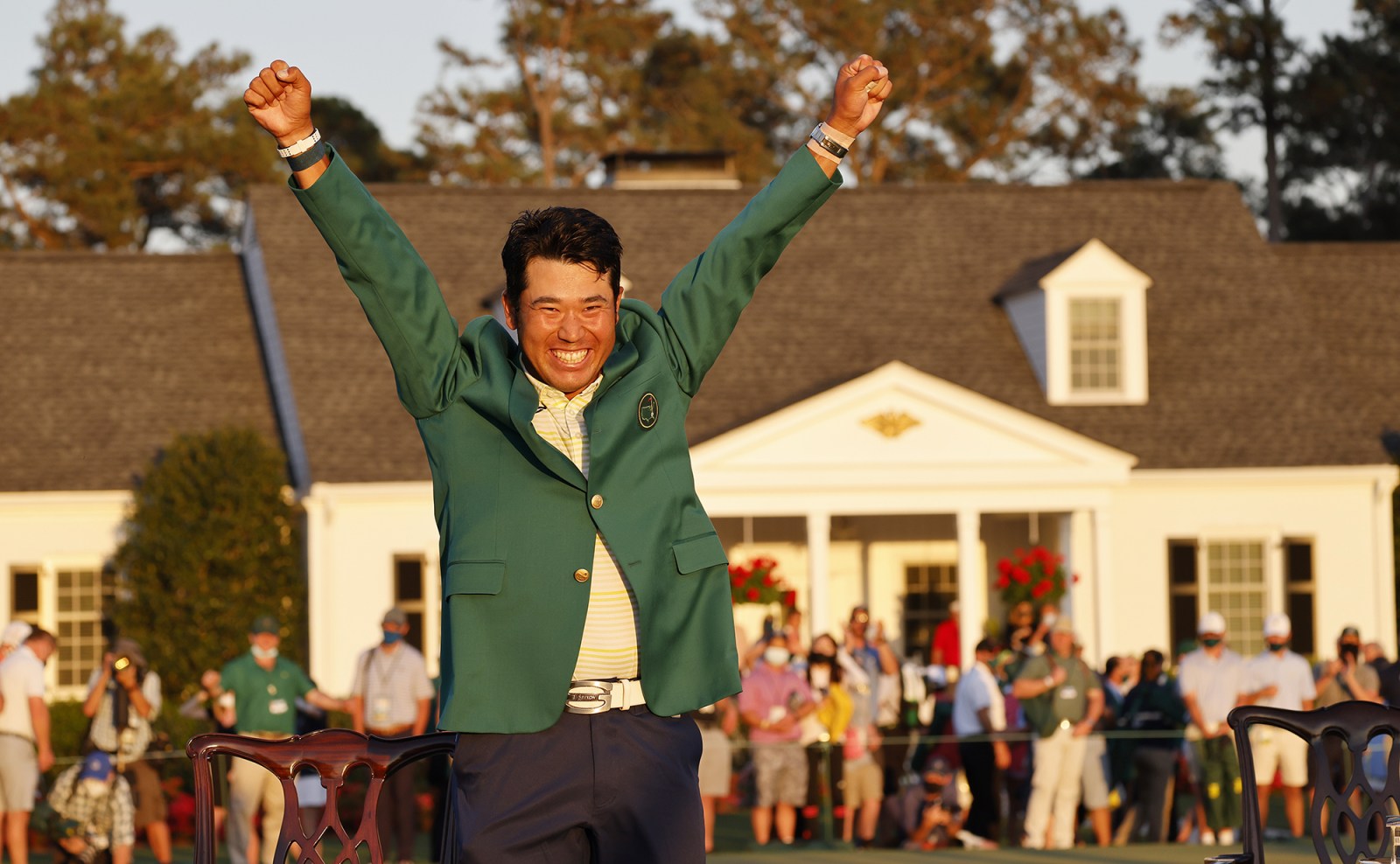 Hideki Matsuyama of Japan celebrates during the green jacket ceremony after winning the 2021 Masters tournament at the Augusta National Golf Club in Georgia, US, on 11 April 2021. (Photo: EPA-EFE / ERIK S. LESSER)

Hideki Matsuyama’s win at Augusta has confirmed his talent, which the world first saw a decade ago.

Ten years ago, a teenage Hideki Matsuyama sat in the Butler Cabin at Augusta National as the 2011 Masters’ low amateur, looking awkward and uncomfortable.

Alongside Matsuyama were Charl Schwartzel, that year’s newly crowned Masters champion, and superstar Phil Mickelson, who would present the green jacket to the South African.

Matsuyama shyly responded to questions about his immediate future, saying that he would return home to Japan to help fellow citizens. A month before the 2011 Masters, a devastating 9.0 magnitude earthquake and subsequent tsunami had smashed Japan’s east coast, causing untold carnage.

Matsuyama may have been on the cusp of becoming Japan’s next big golfing hope, but he was more attuned to the needs of people far less fortunate than him, still reeling from the turmoil of the disaster.

“I’m going to go back home and I want to do some volunteer work, but I do want to finish school, finish my university, and then I hope to turn pro,” the then 19-year-old Matsuyama said through an interpreter. “When I go back to Sendai [in the Tohoku region], I will be staying at the dorm that is half-destroyed. It’s damaged, I should say.”

On Sunday, a decade on from that glimpse into his personality and from those four rounds as an amateur, Matsuyama’s career has completed a circle as he was crowned 2021 Masters champion. He again sat in the Butler Cabin, this time as Masters champion. He still appeared slightly shy and, other than having filled out physically, nothing much seemed to have changed in the past decade.

“Hopefully I’ll be a pioneer and many other Japanese will follow. I’m glad to be able to open the floodgates, hopefully, and many more will follow me,” Matsuyama said, again through an interpreter.

It was instructive that he addressed obvious discomfort at the manic media attention he received in Japan, and how Covid-19 travel restrictions had eased the pressure on him.

“I’m glad the media are here covering it, but it’s not my favourite thing to do, to stand and answer questions,” he said. “With fewer media, it’s been a lot less stressful for me.”

Coming into Augusta, Matsuyama had struggled with his game and had failed to register a top-10 finish in any tournament in 2021. For a man with five previous PGA Tour victories and a reputation as one of the best players on tour without a major, nothing pointed to a Masters’ win.

Yet, by the end of four rounds in tough conditions, Matsuyama became the first male player from Japan to win a major and, in doing so, the Masters has now crowned a champion from every continent.

“It’s been a struggle recently,” Matsuyama said. “This year, I’ve had no top 10s. I haven’t even contended. So I came to Augusta with little or no expectations. But as the week progressed, as I practised, especially on Wednesday, I felt something again. I found something in my swing. And when that happens, the confidence returns. I started the tournament with a lot of confidence.”

The 29-year-old completed a one-shot victory over Masters’ debutant Will Zalatoris, the stick-thin 24-year-old who showed few nerves playing two groups ahead of the eventual winner.

Matsuyama started the final round with a four-shot lead thanks to a brilliant third round, seven-under 65, which included a second nine completed in just 30 strokes after a rain delay.

Matsuyama chose to sit in his car and play games on his smartphone during the weather suspension. When play resumed, he tore up the back nine with precise iron shots that were rewarded on the rain-softened greens. It was the foundation for his victory.

During Sunday’s final round, though, Matsuyama battled nerves all day, starting with a bogey on the first. He eventually signed for a one-over 73 and a 10-under 278 winning score.

Japanese Prime Minister Yoshihide Suga called Matsuyama’s historic win “wonderful” and a source of pride and courage for the Japanese people during the difficulties posed by the Covid-19 pandemic.

“He’s also a graduate of a university in Tohoku,” Suga said, referring to the northeastern region of Japan devastated by the massive earthquake and tsunami 10 years ago. “[His win] has also provided a big boost to the recovery from the disasters.”

Matsuyama needed every single stroke of that four-shot buffer he had as he made his tilt at history on Augusta’s iconic layout. Fortunately, most of the challengers – including the bold Zalatoris – also made mistakes as the pressure of winning the Masters and a major proved too much.

Matsuyama’s playing partner Xander Schauffele made a triple bogey at the par-three 16th. It was a cruel end to his challenge after four consecutive birdies between the 12th and 15th holes had put him two shots behind Matsuyama.

Zalatoris recovered from bogeys on the 10th and 12th with birdies on the 15th and 17th to set a clubhouse lead of nine under.

Matsuyama had led by six shots with seven holes to play. By the time he stood on the par-three 16th tee, the lead was only two shots and Schauffele was on a charge. But then the American put an eight-iron in the water and made a six, which took some pressure off Matsuyama.

On the final tee, Matsuyama had a two-shot lead and, when he pierced the middle of the fairway, he admitted it was the moment he knew he had won.

Soon afterwards he was unfairly asked if he was now the “greatest golfer out of Japan”. Answering that loaded question modestly was tricky, but like his brilliant play, Matsu-

yama found a way to come across as confident but not arrogant.

“I can’t say I am the greatest [from Japan]. However, I am the first to win a major and, if that’s the bar, then I’ve set it,” Matsuyama said. “I hope it will affect golf in Japan in a good way. Not only those who are golfers already, but hopefully the youngsters who are playing golf or thinking about playing golf. I hope they will see this victory and think it’s cool and try to follow in my footsteps.

“Up until now, we haven’t had a major champion in Japan, and maybe a lot of golfers or younger golfers, too, though, well, maybe that’s an impossibility. But with me doing it, hopefully, that will set an example for them that it is possible and that, if they set their mind to it, they can do it, too.”

With the Tokyo Olympics set to go ahead in late July, Matsuyama has already stated that his focus in 2021 was on winning a medal for his country at their home Games.

After his Masters’ victory, the pressure on him to win, not just a medal, but the gold medal, has ramped up. And now there is talk that he might even be asked to light the Olympic flame to mark the opening of the Games.

“It would be quite an honour [to light the flame],” Matsuyama said. “But I’m not sure about my schedule. If the schedules worked out and I am in Japan when that happens and they ask me, what an honour that would be. I’m really looking forward to the Olympic Games in Tokyo. If I am on the team, and maybe it looks like I will be, I’ll do my best to represent my country, and hopefully, I’ll play well.”