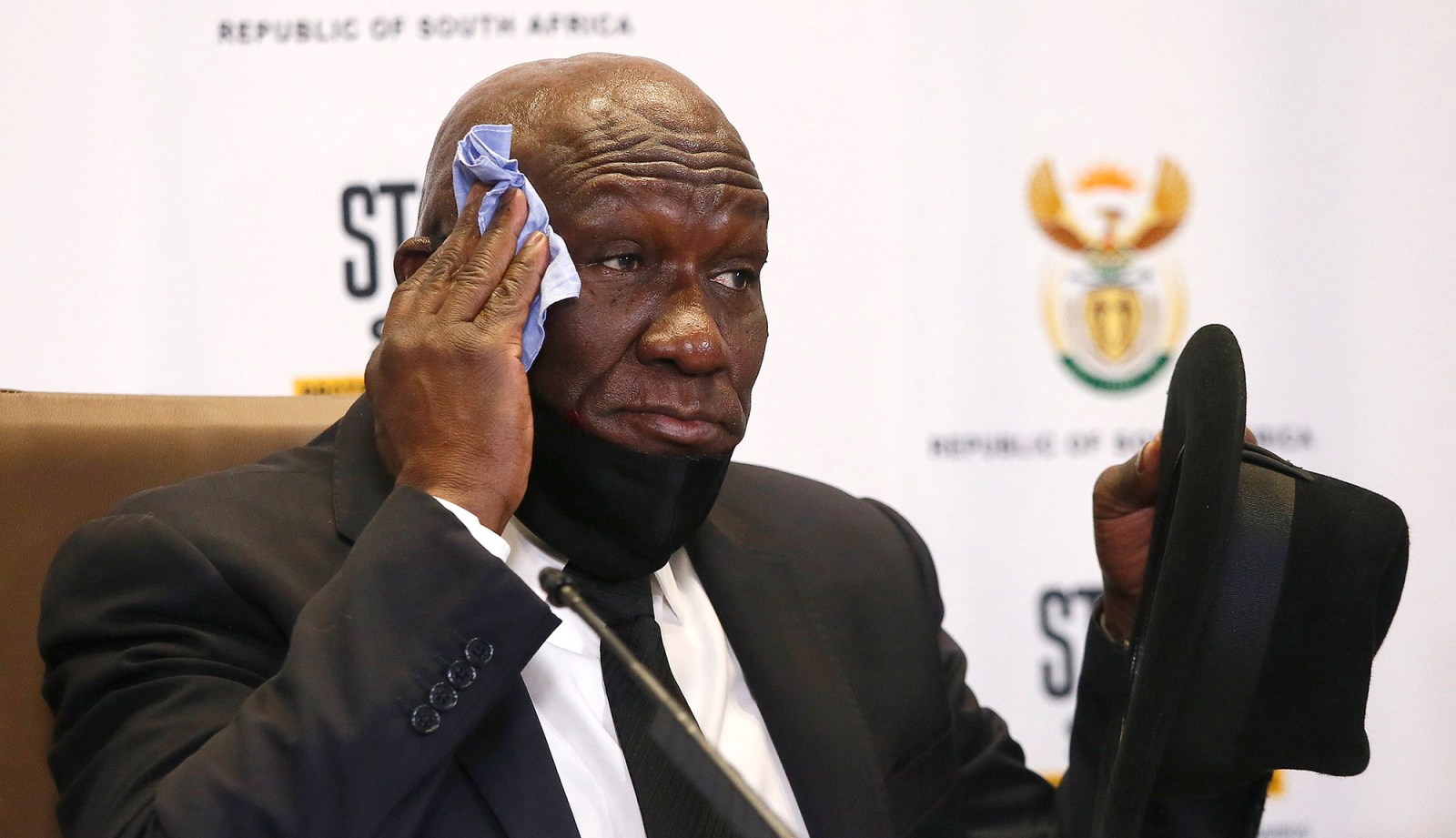 Minister of Police Bheki Cele delivers the annual crime statistics on July 31, 2020 in Pretoria, South Africa. The ministry released statistics of crimes that occurred from 1st of April 2019 to the end of March 2020. (Photo by Gallo Images/Phill Magakoe)

The challenges are tougher than ever, a recent press conference has shown.

On 16 September 2020, Minister of Police Bheki Cele announced the creation of a committee to crack down on resurging extortion in Cape Town.

About a week ago he said more than 100 arrests were carried out over 15 months. But trying to nip extortion in the bud may prove tough, with the roots of these crimes tangled in gangs and policing.

The Cape Town suburb of Belhar was gripped in vicious gang wars in the 1990s – several murders, shootings and assaults were reported, some even recorded taking place at the local cemetery.

On top of this, taxi operators and those running shebeens were forced to pay gangsters “protection money” or their businesses would possibly be trashed, or they faced being assaulted or even killed.

This type of extortion was “apparently standard practice in areas where gangs are active”. Details of Cape Town’s extortion arena of decades ago are contained in a July 2003 judgment against Michael “Kanakie” Booysen and six other men who faced charges including murder.

Michael Booysen was sentenced to life imprisonment in that case and remains in jail.

He is a brother of Jerome “Donkie” Booysen, who was among a group of men arrested in December 2020 as part of an investigation into crimes including murder and extortion in Cape Town.

Both the Booysen brothers’ names have been associated with the Sexy Boys gang, which in turn has been linked to claims of dubious nightclub security operations in the Mother City.

Based on the judgment against Michael Booysen, in the mid-1990s both he and his brother were involved in Core, an organisation ostensibly aimed at tackling gangsterism, but which he said was a smokescreen for crimes including extortion.

Michael Booysen claimed that when he and his brother Jerome decided to leave Core, the gang conglomerate The Firm declared war on the Booysens “because they did not want to pay protection money”.

Meanwhile, a 1998 intelligence document on crime in the Western Cape described the extortion of taxi operators as “not a new phenomenon”.

Extortion was therefore a national challenge still tightly linked to gangsterism, the problem most prevalent in the Western Cape.

“Taxi operators are seen as easy targets who cannot refuse to pay as [they have] to operate in areas where gangs are active. Victims would inform … [the South African Police Service] that they are being taxed but refused to file formal complaints as they fear reprisals from gangs.”

These are just some of several decades-old strands that have braided together to form a burgeoning extortion problem in the city.

Another of these strands involves Major-General André Lincoln, who was investigating, among others, nightclub security kingpin and rumoured intelligence operative Cyril Beeka back in the mid-1990s.

In late 1997, Lincoln alleged that Beeka, who ran a bouncer company, and his staff were foot soldiers for the Sicilian Mafia, the Cosa Nostra, and were involved in crimes including running extortion rackets.Lincoln had also been investigating whether Beeka and his suspected associates had links to crooked cops.

Beeka allegedly secured business by extorting establishment owners in Cape Town’s city centre – if they did not pay up, their venues would be trashed.

To condense an incredibly intricate saga: Beeka was not convicted based on these suspicions, but Lincoln went on to be found guilty of a series of crimes, of which he was later acquitted and for which he claimed colleagues had framed him.

Fast-forward two decades and Nafiz Modack, a younger associate of Beeka’s, was arrested in December 2017 on charges relating to extortion in Cape Town.

Among four other men arrested alongside Modack was Colin Booysen, a brother of Michael and Jerome Booysen.

It was almost as if history was repeating itself, with this Modack-focused matter dredging up what Beeka was accused of about two decades earlier.

Modack and his co-accused were acquitted in the extortion case in February 2020.

The following month a hard lockdown owing to Covid-19 was imposed on South Africa and was only relaxed towards the second half of the year, when coffee shops and eateries reopened.

As lockdown restrictions were eased, extortion claims picked up in Cape Town. Again. In September 2020, Randolf Jorberg, the owner of an establishment on Cape Town’s popular Long Street, claimed to radio station CapeTalk that: “Modack is so desperate for turnover he now goes after everyone – after coffee shops, after little tiny corner bars – no longer just the nightlife clubs and venues…”

In mid-September, Minister Cele announced the creation of a steering committee to tackle the “emerging problem” of extortion. Of course, it was not an emerging problem, but a re-emerging one.

The steering committee would include, among others, the City of Cape Town, police, the National Prosecuting Authority and the South African Revenue Service.

This meant it would be a combination of national ANC government agencies and DA-led ones. Towards the end of last year, there was also a focus on the  broader extortion issue across South Africa.

In a November meeting in Parliament about the police’s budget, it was heard that: “Extortion has also affected the whole country and negatively impacted the economy. Based on available intelligence, it has been established that most of the people involved in extortions are gang affiliated.”

A few months later, in February this year, the extortion of small businesses, especially in townships, was also discussed in Parliament and minutes of this meeting noted that “it was felt that this should be raised as a matter of national security”.

Extortion was therefore a national challenge still tightly linked to gangsterism, the problem most prevalent in the Western Cape. About a week ago, speaking in the context of the situation in the province, Cele held a press conference outlining progress in terms of extortion.

He said 105 extortion cases had been opened since January 2020, and 106 suspects charged and arrested, of which 94 were still being detained.

It was reported that among those taken into custody were two police officers and a member of a deputy minister’s protection unit.

The backdrop to these specific arrests is that the Western Cape, more or less mirroring the national police situation, has a deeply fragmented police service owing to claims among them that colleagues have sided with criminals.

During his press conference last week Cele provided figures on extortion from January 2020 – eight months before the steering committee’s creation was announced – so it is not yet clear how much clout the committee has had.

Cele said extortionists had initially seemed to be targeting small businesses and eateries, but were also going after informal businesses, construction sites and the transport industry.

“What has also become even more worrying is the targeting of the poor and ordinary people in the townships by these ruthless criminals. Flat owners and backyard landlords who are trying to make ends meet are not spared,” he said, explaining that they were forced to pay over portions of rental income.

Extortionists were also resorting to kidnappings. In some of the latest arrests, three suspects believed to be linked to a taxi association were detained in the Cape Town suburb of Bellville last Friday.

They allegedly posed as clients needing transport who then forced an e-hailing taxi driver to a taxi rank, where they demanded money in exchange for his release.

Given the Western Cape’s deeply textured history of extortion, the steering committee set up to tackle related crimes in the province could be viewed as too little too late.

It could also be viewed as an ANC-driven political point-scoring attempt.

But it should perhaps be viewed as better late than never – and at the very least, another necessary avenue through which the police may uncover collusion with criminals within its ranks. DM168