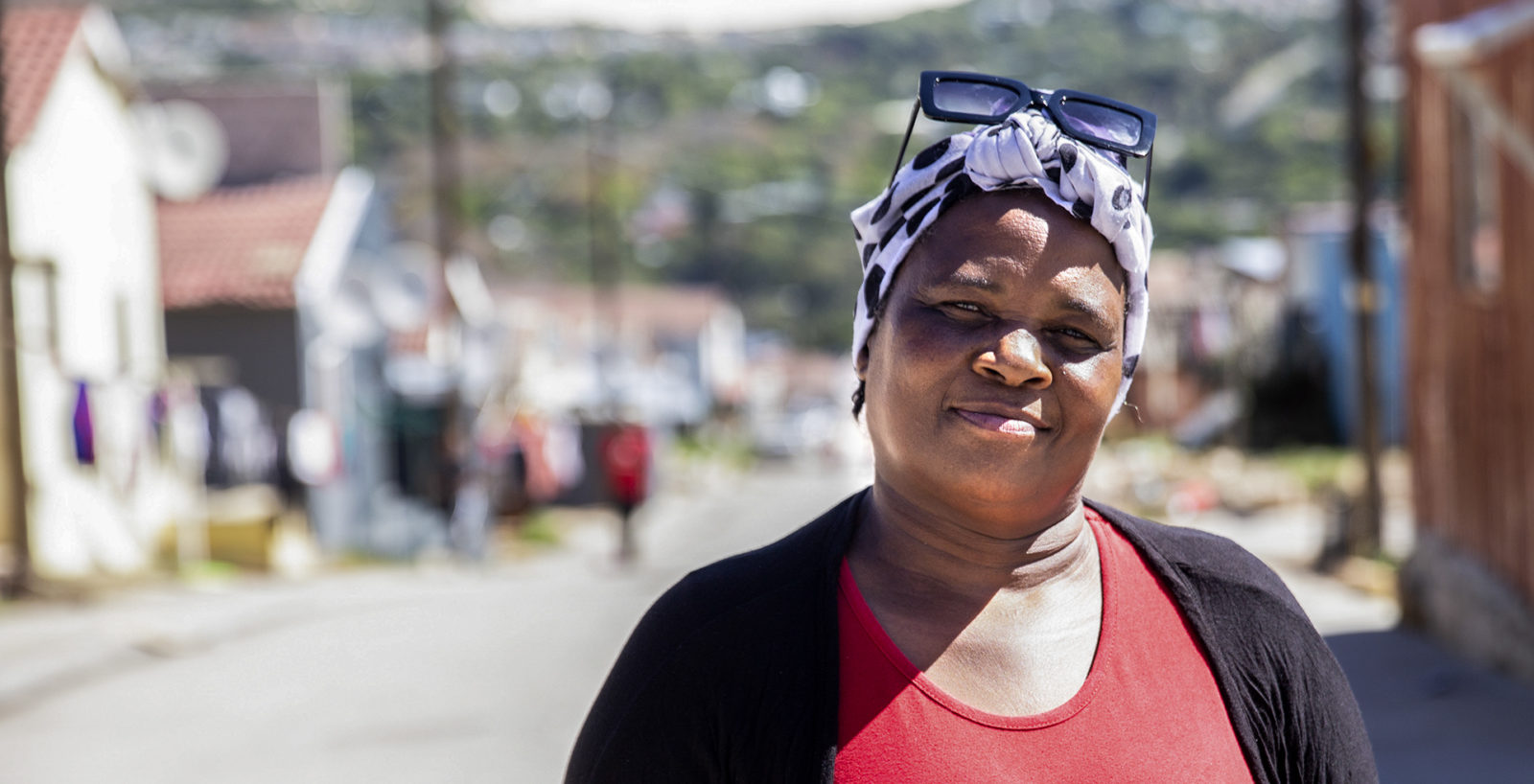 Sindiswa Manxeba is 62 and has lived in Imizamo Yethu since 2008. (Photo: Ashraf Hendricks)

Sindiswa Manxeba started a soup kitchen out of her home in Imizamo Yethu, Cape Town, when lockdown began in 2020. She and her team work primarily to help feed the children of the nearby school, who queue in the street outside.

Sindiswa Manxeba, or Mama Manxeba as her neighbours know her, was born in the Eastern Cape and is in her 60s. Her energy is impressive, not just because she is as active and healthy as a much younger person, but because of the way she speaks about her work. She gets up at 5am, puts water on the stove, takes a bath and starts kitchen duties. When her team of five volunteers arrive at 8am, preparations are well under way. The one requisite for working in Manxeba’s kitchen is to work with love, she says, because problems always arise that can lead to frustration and anger. “We don’t need that.”

When we visit, Mama Manxeba is pacing up and down the street in front of her house where children have started to queue to receive their meal. The first two arrived just after 1pm and by 1:30pm a line has started to form and curves along the street.

Manxeba reminds the children to put on their masks and to keep “social distancing”. Then she fills up a bucket with soapy water and asks each child to wash their hands and to get back in the queue. It’s a simple, but careful procedure, coordinated with three women in the kitchen and two young men who help collect the containers the children have brought with them to store the food. Manxeba asks the children to pray with her to give thanks and tells them, because it’s a long weekend ahead, they should only return on Tuesday.

She says that at one point her team also distributed meals at weekends. This soon exhausted them, however, and they decided to keep the feeding schedule from Monday to Friday — with one exception. One of the neighbour’s kids, a four-year-old, became so accustomed to coming for food that Manxeba found him knocking on her door on Saturdays and Sundays too. Not only that, his mother reported that even when she was able to cook at home, she had to make up a story about how it was Mama Manxeba’s food, otherwise he would not eat.

And it’s not just people from the neighbourhood who enjoy Manxeba’s cooking. We meet Nomthetho, who has brought a group of children from the other end of Imizamo Yethu, near the taxi rank. Nomthetho explains there are no soup kitchens near their school and so she walks 20 minutes with the kids to get to Mama Manxeba.

Manxeba has lived on Molefe Street since 2008. She was among the first residents and speaks fondly of her street, which is clearly a vibrant space. Though narrow, there is a lot of activity. Crowds of people flood the space — chatting, shouting and greeting Mama Manxeba as they walk past her house. Manxeba says she feels very safe on her street because “people are watching what [she is] doing” and they won’t let anyone take anything from her home. She says her neighbours are grateful, as there aren’t other community kitchens in the area.

Manxeba has built strong relationships and her work has had a strong impact on her community. But she does acknowledge that the space could be better. She says she needs more room to be able to move and make more food, and that when it rains the children get wet because there is no shelter.

Lockdown has also given Manxeba the opportunity to walk around and rediscover her neighbourhood. On the one hand, she has seen great need and realised that things are more difficult in other parts of Imizamo Yethu than she had thought. On the other, she has recognised that she has access to certain spaces that bring her joy and that there is room to improve many of them so that more people feel more at home in their own neighbourhood.

She likes to walk the few blocks to iKhaya le Themba, an after-school care facility. It has a small park, which sits on a green patch with beautifully maintained containers. More than 100 children from Imizamo Yethu have access to this space. She has also visited the library, the beach and the Hout Bay common playground. The latter is one of her favourite places because there are no cars and children are able to play safely. When she was there, Manxeba was also able to use the outdoor gym equipment.

Manxeba reflects on the local police station and how during lockdown she has visited frequently to process her kitchen permit. Her experience has been positive, largely because she knows people at the station, yet she has realised there is great value in improving such spaces to make them more welcoming.

“Years back we used to think it is a scary place, but everyone is allowed to go in there.”

Like many other parts of Cape Town, the level of informal trading in Imizamo Yethu is high. During lockdown, this has increased as people try to find ways to make ends meet. Manxeba notes that some of her neighbours set up hair salons at home or braai stands to sell meat on the street. She recognises the need to enable this type of activity, particularly during a global pandemic and the economic crisis that has followed. Covid-19 has had a damaging impact in Imizamo Yethu, with unemployment rising and an evident need for food.

“The last thing we need is law enforcement pushing people off the streets when they are trying to make a living.” DM/MC