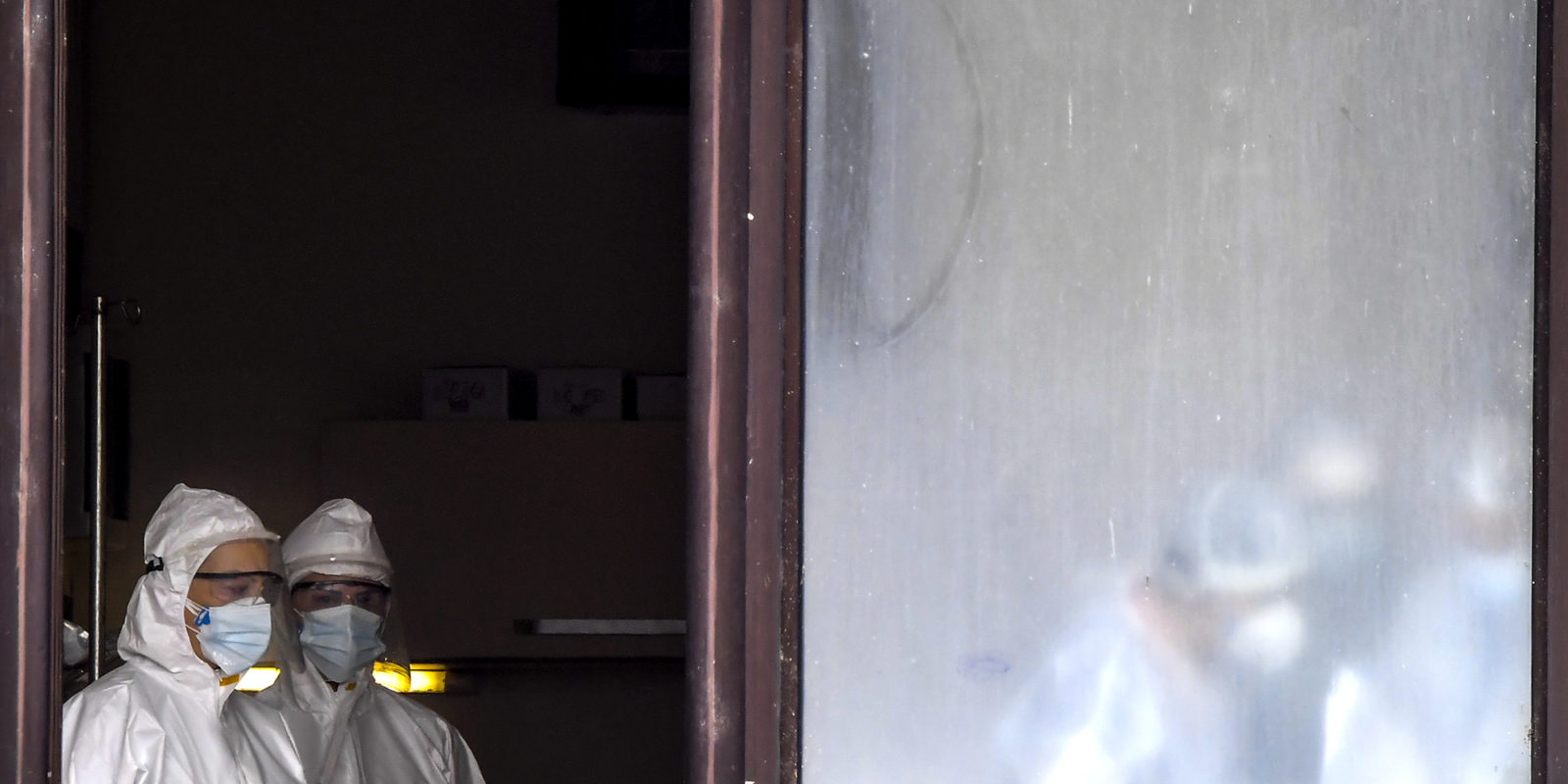 Medical staff in protective suits photographed through window of the one of the Covid centres at the University Clinic Mother Thereza in Skopje, Republic of North Macedonia, 15 April 2021. (Photo: EPA-EFE / Georgi Licovski)

Many US states and cities have a growing surplus of Covid-19 vaccines, a sign that in some places demand is slowing before a large percentage of the population has been inoculated, according to a Bloomberg analysis. New York state hospitalisations dropped below 4,000 for the first time since December 1.

Global production of Covid-19 vaccines surpassed one billion doses this week and are likely to reach two billion in a little more than a month, according to a forecast from research company Airfinity. Merck & Co. halted development of two experimental drugs for patients hospitalised with Covid-19.

The Colorado Department of Public Health and Environment appealed to residents to test for Covid-19 as a fourth wave of the disease sweeps the state.

“As we’ve seen vaccine rates go up, in some areas we’ve started to see testing numbers go down,” Scott Bookman, state incident commander, said during an online briefing on Thursday. “Testing can help to slow the spread of this virus.”

Colorado has allowed cities and counties to ease local health restrictions and Denver lifted its outdoor mask mandate on Wednesday.

New York state hospitalisations for Covid-19 dropped below 4,000 for the first time since December 1.

The seven-day average rate of positive test results dropped to 3.05%, the lowest since November 25, Governor Andrew Cuomo said on Thursday in a statement. New York City’s average positivity is 3.33%, with Staten Island reporting the highest rate among the five boroughs, at 4.29%.

The state reported 6,884 new positive cases, in line with its seven-day average. At that pace, New York should top two million cases in the next week.

More than 50% of New Yorkers 18 years and older have received at least one dose of the Covid vaccine, Cuomo said in a separate statement. More than one in three in that age group have been fully vaccinated.

France on Thursday became the latest country to record more than 100,000 deaths due to Covid-19.

The threshold was reached after 300 fatalities were registered over the past 24 hours, bringing the official toll to 100,077, a spokeswoman for the French public health authority said by phone. The country now has the eighth-highest total number of coronavirus deaths in the world.

It’s a humbling moment for President Emmanuel Macron, who refused to lock down the country for a third time in January despite calls to do so from the medical community and the government’s own scientific advisory committee.

Disney Cruise Line US departures through June 2021 are suspended, the company said in a post on its website.

“We are carefully reviewing the most recently released guidance from the US Centers for Disease Control and Prevention and working toward resuming operations. As we continue to refine our protocols for our eventual return to service, we are cancelling all Disney Dream, Disney Fantasy and Disney Wonder sailings departing through June 2021.”

Maine reported 588 new cases, the highest number since January amid a surge in cases among younger unvaccinated people, state health data shows. People in their 20s now make up almost 19% of new cases, compared with 8% at the start of the year. Maine opened vaccinations to all people 16 years and older earlier this month, though relatively few people have taken them compared with older residents.

Norway has been told to stop using the AstraZeneca vaccine, as the country’s top health authority judges the risk of blood clots unacceptable.

The Norwegian Institute of Public Health “has recommended stopping further use of” Astra’s vaccine, it said in a statement on Thursday. The announcement came just a day after Denmark became the first European nation to cut Astra from its inoculation plan.

Google announced a series of pledges on Thursday to fund and promote coronavirus vaccines across the globe, including $250-million in advertising grants for pro-vaccination groups.

Through its philanthropy arm, Google will pay for 250,000 shots in “low and middle-income countries,” as classified by Google’s partner Gavi, a charity focused on vaccine distribution. Google is also committing $2.5-million for pop-up vaccination sites and related efforts in black, Latino and rural US communities.

Many US states and cities have a growing surplus of Covid-19 vaccines, a sign that in some places demand is slowing before a large percentage of the population has been inoculated, according to an analysis by Bloomberg News.

The data indicate as many as one in three doses go unused in some states. Appointments for shots often go untaken, with few people signing up.

Bloomberg analysed state and US data from Monday, providing a snapshot of vaccine use before Johnson & Johnson shelved millions of shots pending federal health officials’ investigation into rare cases of blood clots. That pause is likely to cause the number of unused shots to fluctuate, but will little change comparisons of states.

Iran signed an agreement with Russia to import 60 million doses of the Sputnik V vaccine, according to Tehran’s ambassador to Moscow Kazem Jalali. The vaccines will be delivered between May and December, state-run Irna cited Jalali as saying. Iran had previously received 520,000 doses of the Sputnik jab.

The country, which has a population of 84 million, has so far vaccinated about 365,000 people, with more than 100,000 having received both doses, according to the Health Ministry. Iran has recorded about 2.1 million cases since the start of the pandemic and 65,680 have died, according to official figures.

Thailand is considering a ban on sales of alcohol at all restaurants after new daily cases jumped to a record, according to Deputy Prime Minister and Health Minister Anutin Charnvirakul. Schools and universities would also be closed for in-person teaching.

The leader of Germany’s most populous state ruled out negotiating a deal to buy Russia’s Sputnik V Covid-19 vaccine and criticised other regions for doing so.

North Rhine-Westphalia Premier Armin Laschet said Russia had been slow in providing data on the vaccine, which is why the European Medicines Agency has yet to recommend its use.

“It’s not acceptable to start a race between individual federal states over a vaccine that hasn’t even been approved yet,” Laschet told lawmakers in the NRW regional parliament. He is currently vying with Bavaria Premier Markus Soeder for the right to run as chancellor candidate for Angela Merkel’s conservatives.

CureVac is some five months behind the front-runner messenger RNA vaccines against Covid-19. But after the industry’s recent setbacks, that’s starting to look like good timing.

The German company will unveil clinical trial results soon and has said it should be able to secure approval in the European Union by the end of the second quarter – and possibly as early as next month.

New waves of Covid-19 infections could derail the economic recovery in sub-Saharan Africa, which is already forecast to lag the rest of the world this year amid limited access to vaccines, the International Monetary Fund warned.

In its regional economic outlook released on Thursday, the IMF said growth projections are subject to “greater-than-usual uncertainty” given the risks of further Covid-19 shocks in the continent, which relies on a World Health Organization-led initiative to provide vaccines, known as Covax.

Covid patients saw a clot risk of 39 in a million. That compared with four in a million in mRNA vaccines like those developed by Pfizer and BioNTech or Moderna, and five in a million people after AstraZeneca’s vaccine. Though the analyses for the three vaccines are based on different data sets, making comparisons difficult, the study suggests that the risk of a clot among those with the disease is about eight to 10 times higher than after vaccination.

Merck & Co. halted development of two experimental drugs for patients hospitalised with Covid-19 and began a final trial of one of them, its highly anticipated antiviral pill, for people with milder disease after getting mixed results about the medicine’s benefits.

The pill, known as Molnupiravir, reduced virus levels in patients during a mid-stage study but didn’t show a meaningful benefit in preventing hospitalisations and deaths, the Kenilworth, New Jersey-based company said in a statement. It decided to discontinue its development for the sickest patients, those hospitalised with the infection, after the trial showed it was unlikely to help them.

After Covid-19 vaccine production surpassed one billion doses this week, the world could produce the next billion in a little more than a month, according to a forecast from Airfinity, the London-based research company.

At the same time, a delay to Johnson & Johnson’s vaccine could push European Union efforts to vaccinate three-quarters of its population back to December, from the end of September, Airfinity estimates. J&J’s vaccine is under scrutiny because of a rare clotting disorder arising in a small number of patients, similar to one seen with AstraZeneca’s vaccine.

Germany’s healthcare system is getting stretched to the brink, with many hospitals overwhelmed with Covid-19 patients and rising case numbers pointing to tougher days ahead.

The occupancy rate in intensive-care units rose to 88% on Wednesday, the highest in more than a year. Some hospitals need to “significantly reduce” elective procedures and relocate stable patients to other parts of the country to cope, said Lothar Wieler, head of Germany’s Robert Koch Institute public health agency.

“The situation is getting dramatically worse,” Wieler said at a press conference on Thursday as Germany reported 31,117 new cases, the most since mid-January.

Greece plans to lift a seven-day compulsory quarantine for visitors from the European Union and five other countries including the US and UK as of next week, according to a person familiar with the matter.

The 19 April move is part of a gradual reopening of a tourism sector that’s one of the country’s most important, said the person, who asked not to be named as the decision hasn’t been announced. The industry accounts for about a fifth of the Greek economy and more than a quarter of jobs.

Ireland on track to ease curbs

Ireland is “on track to ease restrictions as planned on May 4”, Deputy Prime Minister Leo Varadkar told RTE Radio. The country is still scheduled to give a first dose of vaccine to 80% of adults by the end of June, he said. DM