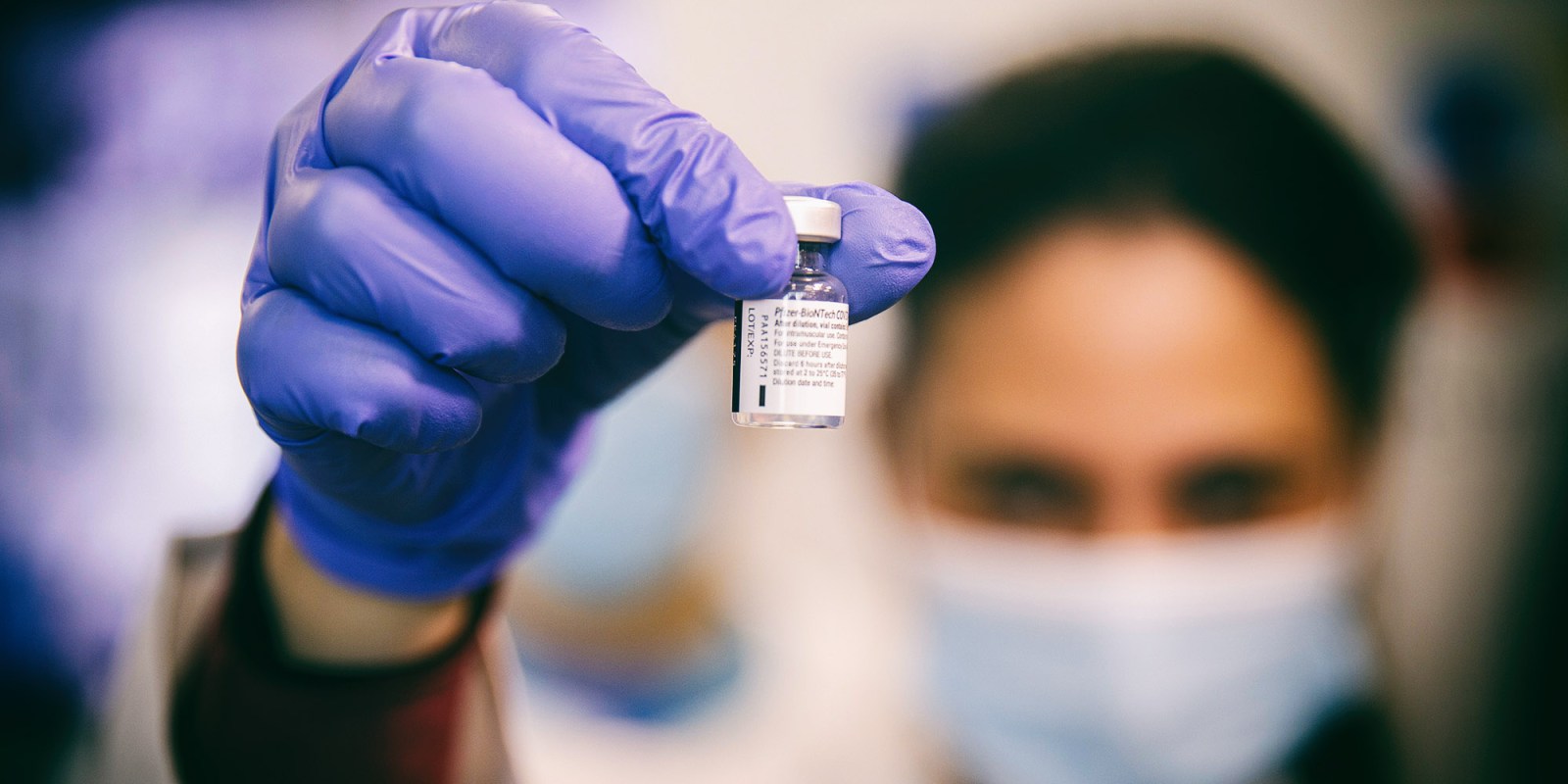 South Africa’s vaccine task team believes that 67% of people over 18 can be inoculated by the end of December. The Johnson & Johnson pause will not impact the roll-out, says the vaccine Ministerial Advisory Committee chairperson.

If the current rate of vaccination continues, it will take most of us 16 years, give or take, to get a jab, according to Media Hack, the vaccine calculator.

But South Africa’s vaccine task team reckons that the target of 67% immunisation can be achieved by December as stock scales up from April 21.

A rare thrombosis noted in six women vaccinated with Johnson & Johnson (J&J) in the US has caused a seven- to 10-day pause there and in Europe; SA has stopped its trial too. The J&J vaccine had been given to 6.7 million people in the US before the clotting was reported. 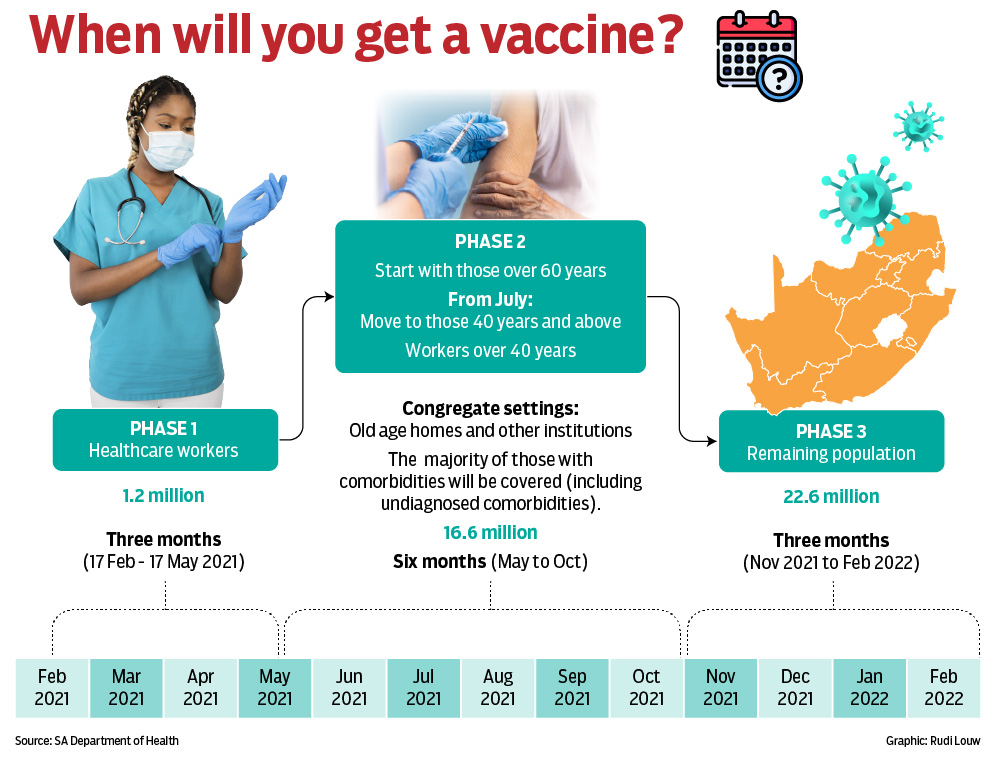 “If there are safety signals, no matter how vanishingly small, we have to take heed,” said Professor Barry Schoub, the vaccines Ministerial Advisory Committee (MAC) chairperson. “Vaccines are given to healthy people [so] they must be safe. On the other hand, it is about preventing serious disease. I’m pretty sure the pause won’t delay the roll-out,” he said.

Negotiators say that all the contracts are almost concluded, quarterly commitments have been made and consignments of Pfizer and Johnson & Johnson will arrive monthly. (See graphic for vaccine supply chain.)

If you are more than 60 years old, there is good news. The MAC has persuaded the government that older South Africans are most at risk from severe Covid or death from the virus. The plan is for people over 60 years old to be vaccinated first and hopefully by the end of July.

There is no sign of a third wave of infections developing because South Africans have been conscientious about masking and distancing. According to different seroprevalence studies, the real infection rate has been between 30% and 50% in parts of the country.

South Africa may be closer to achieving population (or herd) immunity than we think, but identifying new and different variants can cause reinfections.

While people over 60 are being vaccinated, the remaining 500,000 healthcare workers not covered by the trial vaccines will be vaccinated in parallel. Registration on the vaccine portal opens on Friday, April 16, but not yet for scheduling.

Once the five million people over 60 are vaccinated, then people in nursing homes, prisons and other crowded settings will get the jabs, because Covid can rip through them more quickly, studies have shown. People under 40 years old with comorbidities will be next in line, probably from August, according to the national vaccine strategy. The comorbidities are diabetes, chronic lung disease, cardiovascular disease, renal disease, HIV and TB.

The rest of us over 40 years old, who are not health workers or in the most vulnerable categories for severe or morbid Covid, will be vaccinated from November to February. The original vaccine strategy published in January 2021 is running two months behind schedule, so if you build in a similar period, it could run to April 2022.

A senior doctor who is privy to the plans says that the best-case scenario is to complete inoculation of 67% of the adult population by December and that a buffer has been built into February to mop up. He says numerous actuarial projections have shown this is possible.

If you live in a city or town, you will likely receive the Pfizer two-jab vaccine, with the injections scheduled six weeks apart. If you live in a rural area, you will probably get the J&J vaccine (provided the SA Health Products Regulatory Authority gives the go-ahead). Venues can store a single dose in a fridge as the health worker Sisonke trial has shown.

The graphic shows that Pfizer takes nine days to go from airport to arm; J&J shots will take five days because the bulk will come from the Aspen plant in Gqeberha. Bear in mind that the pause due to side effects may delay this. 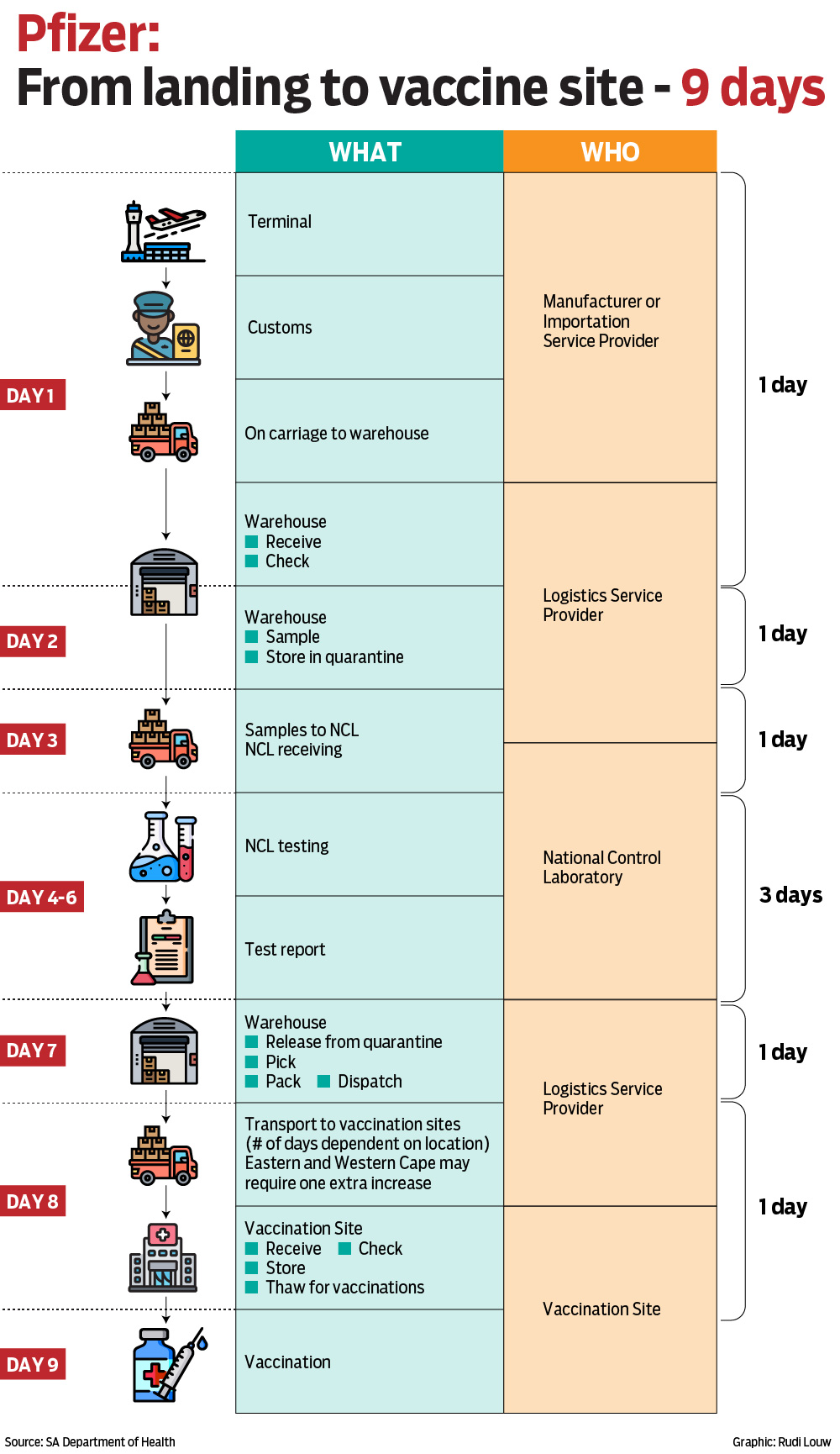 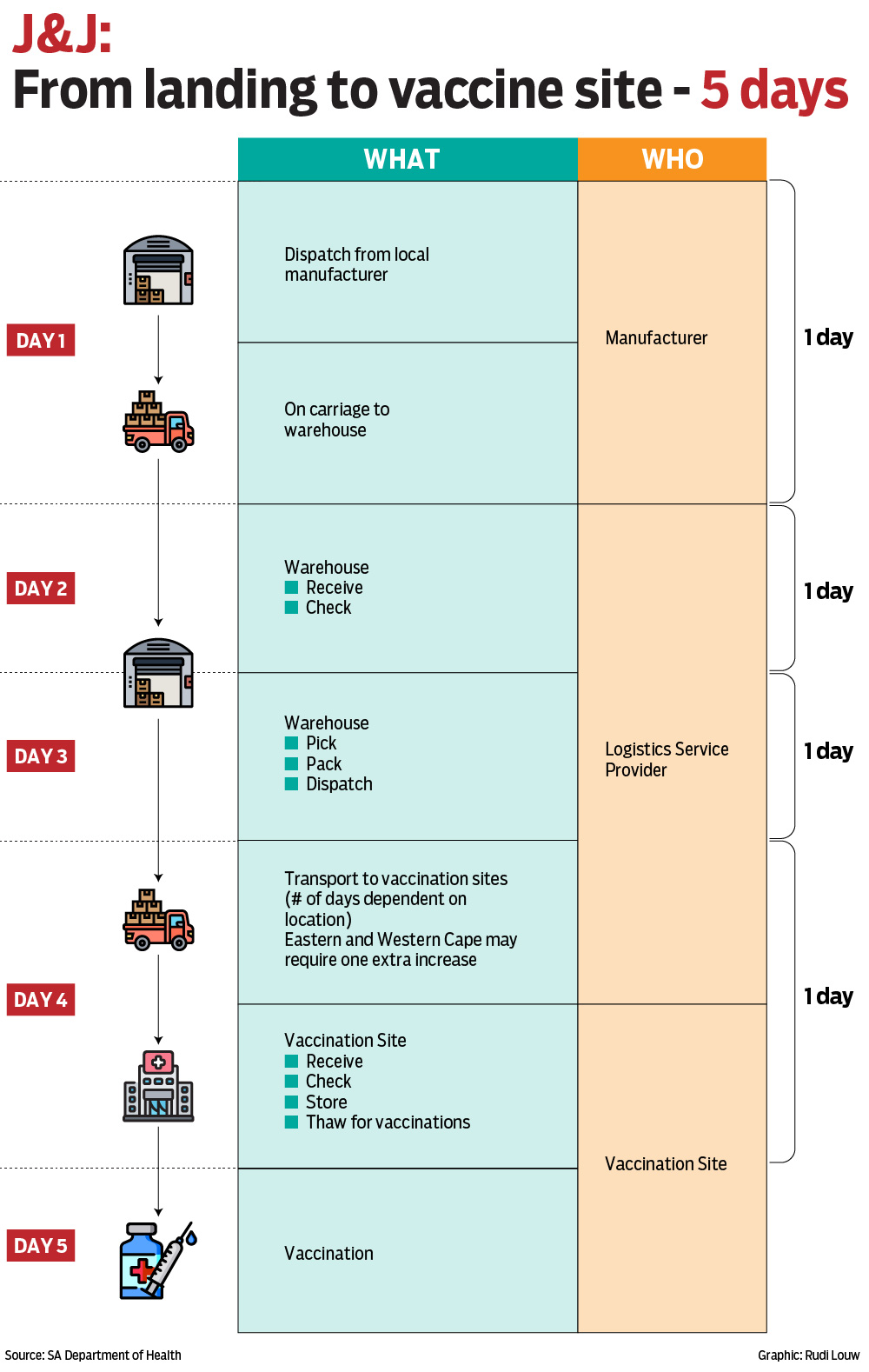 How do you get an appointment, and where will you be vaccinated?

When alerted to do so, you register on the Electronic Vaccine Data System (EVDS) – a crucial step. It opens for registration but not scheduling on Friday, April 16. The EVDS has been used in the trial vaccine programme to schedule the time and venue of healthcare worker appointments. The chief information officers of South Africa’s top medical schemes are working with the Department of Health to ensure it does not fall over like school registration, licence renewal and identity card application systems have done. This system is key because it allows for vaccine tracking and post-vaccine surveillance to assess and study side effects.

There will be 10 mass urban sites that are planned to be able to scale up to 50,000 vaccines a day. These will be stadiums, convention centres, parking lots and malls. Some 10,000 other venues are planned. These are not new but are places where you receive your healthcare, like clinics, district hospitals, GP rooms and pharmacies.

In rural areas, nurses will use mobile clinics to reach the infirm or those who live far from healthcare. It is not yet clear whether you are assigned a venue or choose one. The details are being worked out by health department officials from the immunisation and communicable disease clusters who have vast vaccination experience. Medical schemes, private hospitals, pharmacy groups, GP and specialist associations are also part of the advance teams.

“The J&J trial has taught us lessons,” says Dr Morena Makhoana, a member of the MAC. Parties who had not worked together before have now done so, which has caused important relationships and processes to be put in place.

Biovac, the distributor headed by Makhoana, has worked with J&J and with Natjoints, the security structure, and the Medical Research Council. Shift systems have been worked out and the J&J vaccine has been handled at -20°C in specialised boxes.

“It’s one thing knowing it theoretically and another applying the lessons,” says Makhoana. “We know which provinces can handle big shipments at a central place and those that can’t.” He says that two-thirds of the system is in place and that one-third is still being worked out.

In the best-case scenario, logistics planners say the system can scale to 250,000 to 300,000 vaccinations a day at its peak, with 150,000 a day of these in the private sector. The factor counting for this scenario is that the vaccine supply chain is secured, which it wasn’t when Health Minister Zweli Mkhize announced the plan in January. Then, negotiators came face to face with the tough tackle of Big Pharma.

This week, Mkhize told Parliament about onerous conditions that were attached, like aggrandising letters and harsh indemnity conditions, but we now appear to be past negotiations. Because we have a good paediatric vaccination programme, there is a basic national infrastructure for inoculation to build on.

South Africa has vaccinated almost 300,000 frontline health workers as part of the Sisonke trial. If the pace only grows slowly, it will take years to complete even the inoculation of 67% of the adult population. We will increasingly be locked out of the world – the variant 501Y.V2 has sealed South Africa off. Scientists may identify other variants.

The economy could suffer a further body blow, especially tourism and cross-border retail, which contribute a significant percentage of GDP and jobs. Vaccine passports, the documents that allow travel and trade, may be unpalatable, but they are quickly becoming part of the new normal.

The worst-case scenario is that side effects will pause inoculation again and again: this is the second time in three months that South Africa has had to halt a vaccination plan. The first AstraZeneca consignment was sold to the rest of Africa as it is ineffective against the dominant variant here.

The weak state and high inequality of human and financial resources between urban and rural South Africa will require a huge effort to ensure that domestic vaccine apartheid does not emerge to mimic global vaccine apartheid. Bloomberg reports that the world’s wealthiest 27 countries have 38.7% of vaccinations but only 10.9% of the population.

SA is also reliant on only two vaccines, Pfizer and Johnson & Johnson, and is super vulnerable to pauses – the US, for example, has access to four different vaccines. A small study reported in the Financial Times in February said the Pfizer vaccine is less potent against the variant now dominant here, but Schoub said the MAC had assessed the study and was not worried.

South Africa does not have high vaccine hesitancy, but The New York Times reported on April 15 that the J&J pause could dent vaccine confidence across the world. DM