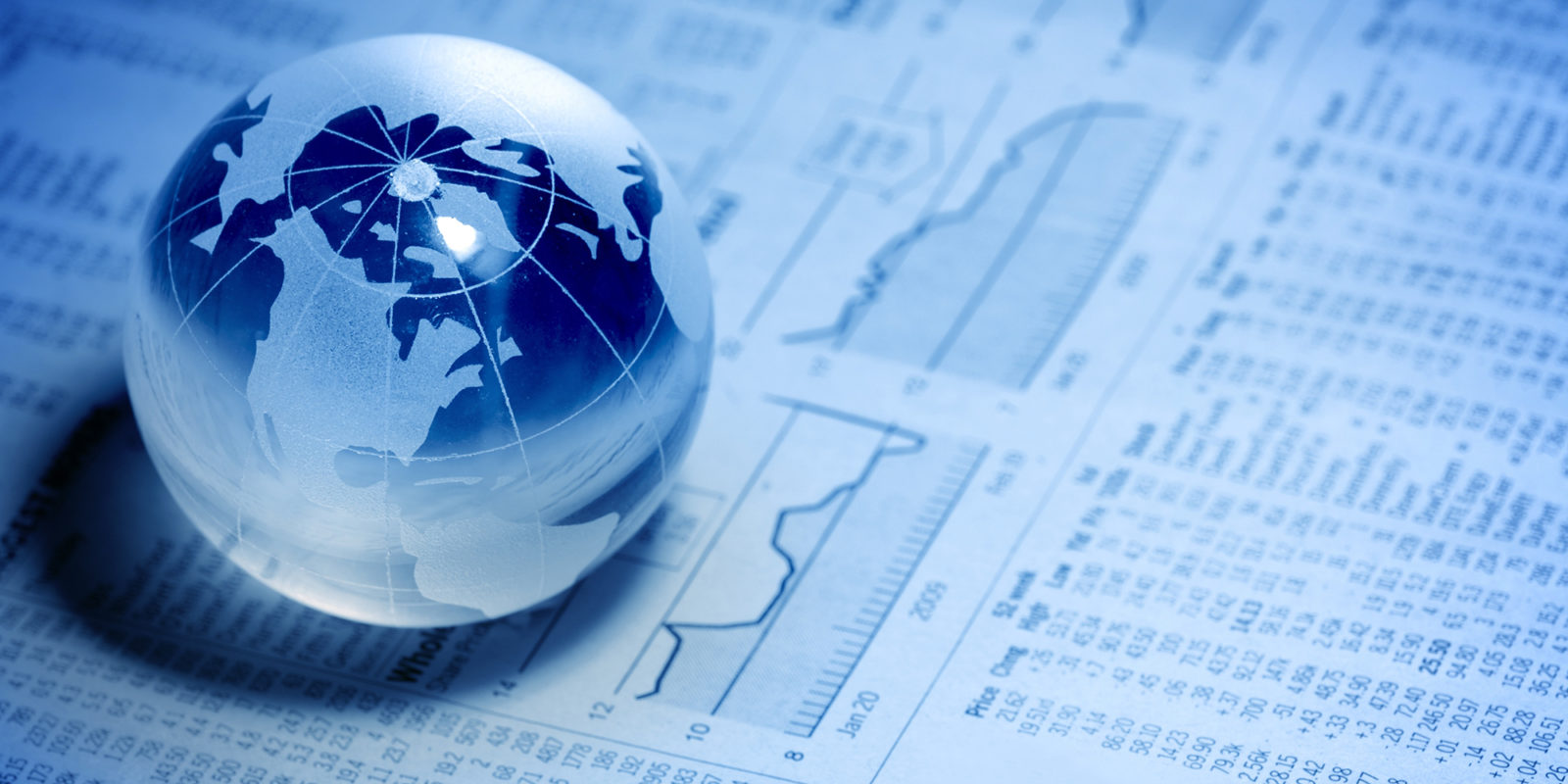 Good news on the global economic front prevailed in the wake of the International Monetary Fund’s upbeat assessment in its latest World Economic Outlook. However, three material risks continue to weigh on the global economy — particularly for countries most vulnerable to external forces, such as South Africa.

The good news just kept on rolling in after the IMF upwardly revised its global growth forecasts last week, but economists are keeping a close eye on the very real downside risks that still hover over the global economy.

Oxford Economics came out with even more upbeat forecasts for the US, UK and the world, seeing the former two rising by 7% or more in 2021, and the world growing by more than 6%. That compares with the IMF forecasts of 6.4% in the US, 5.3% in the UK and 6% for the world. 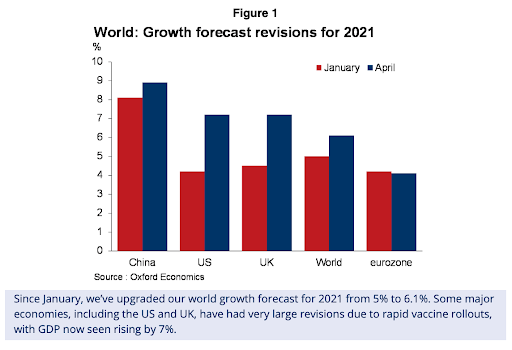 Other upbeat economic data released over the past week provided further confirmation that the US is recovering faster than expected. The March US PMI data was far higher than consensus, coming in at 64.7 versus the expected 61.5 — a 37-year record high.

JP Morgan asset management chief global strategist David Kelly says this is a reflection of robust manufacturing activity “driven by strong growth in orders, production and employment, along with increases in prices paid for inputs”.

Even more significantly, the services index, which has been lagging behind the manufacturing index, has started to catch up. Says Kelly: “It is notable as services was hit particularly hard by the pandemic and is expected to be an important contributor to the growth surge going forward.”

Other good-news data that came through in the US last week was the far stronger-than-expected March jobs report. Kelly says the 916,000 rise in non-farm payrolls in March suggests an even more powerful recovery than suggested by the Fed’s recently upwardly revised forecasts.

Europe, which has been an increasing cause for concern as the region struggles to shake off its third wave of infections, also had promising economic news last week when the eurozone’s March composite PMI rose into expansionary territory, notwithstanding the lockdowns imposed during the month.

The region also saw the services sector pick up, which Chris Williamson of IHS Markit sees as indicating that the economy is weathering recent lockdowns much better than expected. “This resilience suggests not only that companies and their customers are looking ahead to better times, but have also increasingly adapted to life with the virus,” he notes.

At home, data was more mixed, with manufacturing numbers disappointing, but the SA Absa Manufacturing PMI increased for the third month, vehicle sales remained buoyant and February mining output growth came in ahead of expectations this week.

Absa economist Peter Worthington said that the 0.8% year-on-year increase in mining output was well above the bank’s -1.7% forecast for the month.

Encouraging as these economic indicators may be, they do not detract from the fact that global economic risks are still skewed to the downside, a fact driven home by the IMF, which has warned that a divergent recovery, in particular, may put financial stability at risk.

JP Morgan, which this week outlined its three leading economic risks, included the rising US bond yields as a possible trigger for fomenting equity market volatility. Its other two risks were economic reopenings slowing as a result of the emergence of Covid-19 variants and vaccine delays, and inflation spiking in the medium term.

The impact rising US bond yields could have on emerging markets could be considerable too. In a blog article titled “An Asynchronous and Divergent Recovery May Put Financial Stability at Risk”, director of the IMF’s monetary and capital markets department, Tobias Adrian, says its estimate is that a 100-basis point rise in the US term premia would, on average, result in a 60-basis point rise in emerging market term premia. 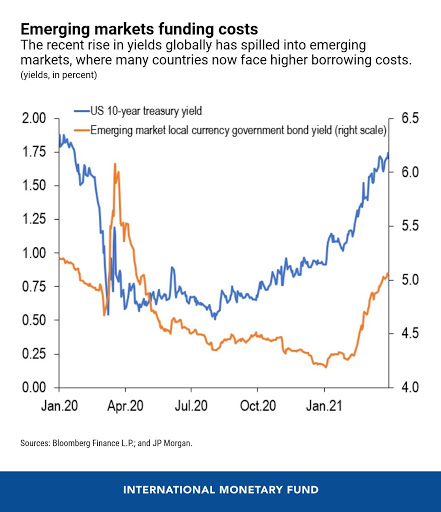 “Any abrupt and unexpected increase in rates in the United States may translate into a tightening of financial conditions, as investors shift into ‘reduce risk exposure, protect capital’ mode,” he notes, seeing it as a concern for risk asset prices because valuations appear stretched in some areas of financial markets.

Emerging markets would be most vulnerable to sudden shifts in investor sentiment, as witnessed in 2021.

“With many of those countries confronting large external financing needs, a sudden sharp tightening in global financial conditions could threaten their post-pandemic recovery. The recent volatility in portfolio flows to emerging markets is a reminder of the fragility of these flows.”

Regarding inflation, the statistics released over the past week did confirm the likelihood of a pick-up in inflation, as anticipated by central banks and feared by investors.

Kelly points out that the Services Prices Paid index in the US ISM Services PMI rose to 74, versus 71.8 in February, “indicating that inflation pressures are continuing to increase as the economy reopens”.

Oxford Economics believes some of the concerns regarding a resurgence in inflation are overdone.

“But we do think central banks will need to be very alert to the potential risks, and we see higher chances of a material upside shock to inflation than many other forecasters but ‘somewhat’ lower than market participants’ expectations.”

Ultimately, however, the health of the global economy will rely on overcoming the virus, with vaccines rolled out effectively globally — not just in the developed markets — and measures taken to successfully deal with new strains as they emerge.

Brookings Institute warns that the current inequality of vaccine distribution is excessive and progress towards achieving #VaccineEquity has been slow and “marred by bottlenecks”.

Though there have been positive headlines about vaccine rollout progress this week, the Bureau for Economic Research notes that these excluded SA, unfortunately.

While there was some relief when the government secured stock of Pfizer and Johnson & Johnson vaccines, this week the J&J vaccine was put on hold because of concerns around blood clots. That could push out estimates that vaccinations of adults in the general population could begin in November.

Until the government makes sizeable inroads towards the goal of achieving herd immunity, South Africa remains exceptionally vulnerable to the downside risks that lie ahead — and our economic growth will continue to diverge from those countries potentially benefiting from 7%-plus growth this year as they emerge from the Covid-19 tunnel. BM/DM