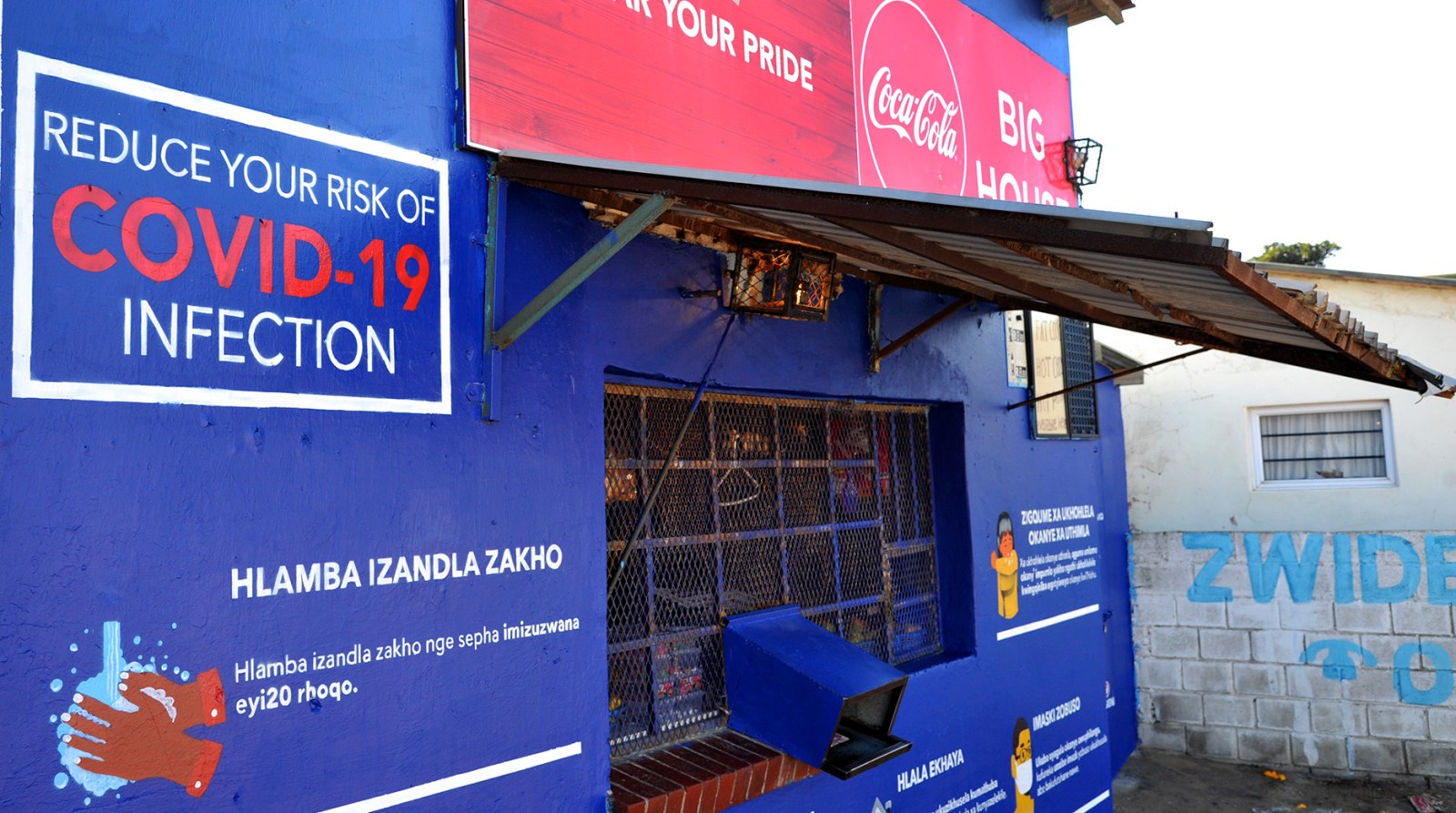 A shop in Gqeberha that has been branded with Covid-related health messages. (Photo: Mike Holmes)

The Eastern Cape Department of Health has identified eight cities and towns as the origin of 44 coronavirus cases that were imported into the province over the past two weeks, as active cases rose by 18.2%.

The incidence of coronavirus infections in both metros in the Eastern Cape, Nelson Mandela Bay and Buffalo City, has increased above the “safe” rate of five cases per 100,000 of the population.

Professor Darelle van Greunen from Nelson Mandela University said this week that it is difficult to predict what the third wave might look like.

“There are many factors that could impact that… more mutation of the virus, the pace of vaccinations, human behaviour and lack of compliance, testing.  With the adjusted Level 1 lockdown and the approach of winter and the flu season, there may even be new drivers that are unknown as yet.”

Nelson Mandela Bay was identified as the epicentre of the second wave of coronavirus infections in SA, with the 501Y.V2 variant first identified in samples from Gqeberha (formerly Port Elizabeth). The latest analysis of the epidemic confirms that the second wave “had more deaths”, and lasted longer than the first wave.

According to the latest epidemiological report from the Eastern Cape Department of Health, there had been an increase of 18.2% in active cases — the province had 253 active cases, with 35 new cases being reported on Monday.

On April 5, at the end of the Easter Weekend, the province was reporting 13 new cases a day. By 11 April this was up to 20 cases a day — despite a drop in testing rate.

More than half of the province’s cases are in Nelson Mandela Bay (106) and the Sarah Baartman district that includes large parts of the Karoo and the coastal towns of Jeffreys Bay, St Francis Bay and Cape St Francis and runs to the border with the Western Cape.

The case fatality rate for the province remains around 5.8%.

According to the report, the increase in active cases is partially attributed to travel over the Easter weekend with patients coming from Bloemfontein, Ceres, Cape Town, George, Khayelitsha, Knysna, Stellenbosch and Strand.

The report also added that post-mortem testing has shown that 48% of those dying outside of a health facility in the Joe Gqabi District (around Aliwal North) tested positive for the coronavirus. In the OR Tambo District around Mthatha this rate was 41%, and in the Alfred Nzo District, around Mount Ayliff, 35.9%.

Professor Azwinndini Muronga, from Nelson Mandela University’s Science Faculty, said if the province sees similar increases in infections for the next seven to 14 days, “we need worry”.

“If this steep rise continues, then the Eastern Cape might lead the third wave again,” he said. “But these increases seem to be in the Eastern Cape, Gauteng, the Western Cape, Mpumalanga and KwaZulu-Natal. Something might have started a chain reaction already. More testing will reveal what this is,” he said.

“We cannot say with confidence that the reported numbers are accurate. We are seeing under-reporting in some instances. To achieve herd immunity the virus needs to encounter people who are protected against infection. This can happen when the population is no longer susceptible as a result of vaccination programmes focused on specifically those who have compromised immune systems.

“Perhaps we should call it ‘herd protection’, as the risk of the vulnerable is only reduced when in contact with the pathogen. It doesn’t provide immunity to the virus itself.”

Muronga added that they were forecasting that the third wave would start in cities.

“Those who travelled over the Easter weekend are back in the cities. If we are already riding on the unseen wave due to under-testing, then the rural areas will only be a bump compared to what will happen in the cities.”

Muronga said multiple research groups had developed epidemiological models for Covid-19. These models use confirmed cases and deaths, testing rates, a range of assumptions and epidemiological knowledge to estimate true infections and other metrics.

“It may even be higher than [a conservative estimate of] five times what is reported.

“We need to aim to vaccinate earlier than 17 May. The health workers are showing some form of immunity after receiving the vaccine. The sooner we reach the most vulnerable and those in congregate settings, the sooner we can slow down the infection rate. Having said that, we cannot relax the focus on the non-pharmaceutical interventions, specifically amongst the younger generation.”

By the younger generation, Muronga was speaking of young adults under the age of 30 and the continued use of non-pharmaceutical interventions such as the wearing masks and washing of hands.

“Even if herd immunity is attained across the population, it is still possible to have large outbreaks, such as in areas where vaccination rates are low. Hence, the need to speed up the pace of the vaccination programme.”

“Globally, epidemiologists agree that the concept of achieving herd immunity through community spread of a virus rests on the unproven assumption that people who survive an infection will become immune. Too little data is available to understand the duration and effects of the immune responses of people.” DM/MC