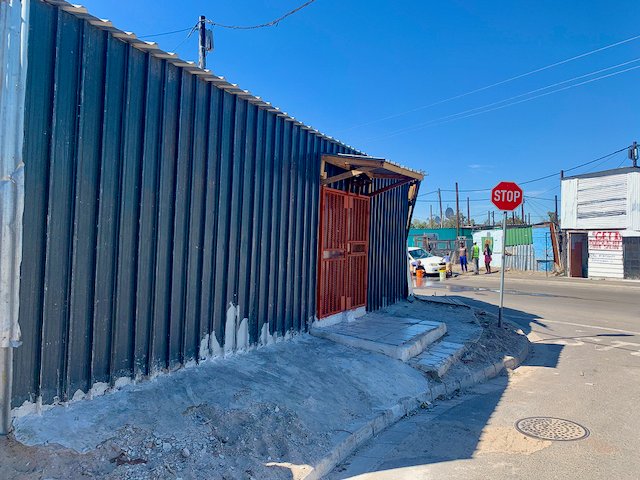 Somalian spaza shop owners in Witsand, Atlantis, were driven out on 31 March. They were given three hours to leave. Shops remain closed. (Photo: Peter Luhanga)

In the presence of police, local business owners gave Somali spaza shop owners in Witsand township in Atlantis, Cape Town, three hours to pack up and leave. Witnesses say the business owners were cheered on by about 200 residents. This happened on 31 March and since then the shops have remained shut.

Mowliid Omar said a group of men banged on the security bars and windows of his shop and threatened to loot his shop if he did not pack up and go. He said police officers were present and failed to intervene. He handed the keys to his landlord. He later recovered his stock at the police station, where local shop owners had dumped it.

Last week, a South African woman, who asked to remain anonymous as she feared for her safety, told GroundUp she had opened her spaza shop in 2006, but had later decided to rent it out, first to a local business person, who didn’t pay rent for three months and then left, and then to a Somali man for R3,000 a month. He upgraded her shop and even installed a flush toilet.

Then on 31 March, local residents accompanied by the police came to her door and demanded he leave immediately. She said the police told her tenant to comply.

She said earlier in March a child had delivered a letter stating that business owners needed to attend a meeting at the municipal resource centre.

“When we went there, there were only community leaders consisting of local business representatives and they started insulting us, saying we are renting out space to Somalians,” she said.

Since her tenant has been driven out, she has started to operate the shop herself again but at a low key and she is struggling. She says residents are being monitored to see if they are not operating shops on behalf of the expelled Somalis.

“So I am scared they would think we have brought them [Somalians] back – that is why we are having to order stock little by little,” she said.

A number of residents, who feared reprisals and would not give their names, said without the immigrant-run shops they faced shortages of basic items, including bread and airtime.

Omar said he has endured xenophobic attacks before and had his stock looted in 2008, in Paarl in 2010, in Kraaifontein in 2013, and now he was driven out of Atlantis.

“We don’t get any help from the police. It looks like they had an understanding with those people,” said Omar.

Atlantis SAPS spokesperson Captain Elizabeth Munro confirmed that Somali shop owners had been “ordered” to leave Atlantis. She said residents who had rented a portion of their homes or front yards to Somalis to operate spaza shops had since opened intimidation cases against those who ran their tenants out of town.

She said a meeting is scheduled with representatives of the Witsand community, the Somali community, and other law enforcement agencies.

“SAPS involvement extended only to uphold law and order. [It is]unknown how many Somalis left Witsand out of their own free will. The police are still visible in Witsand to do crime prevention,” she said.

On Monday, City of Cape Town subcouncil 1 chairperson Nora Gross said she had met the Witsand Development Forum last Friday and the local business owners had complained that Somalis were out-competing them.

She said local residents had no issue with the immigrant shopkeepers; it was the local business owners who had threatened them.