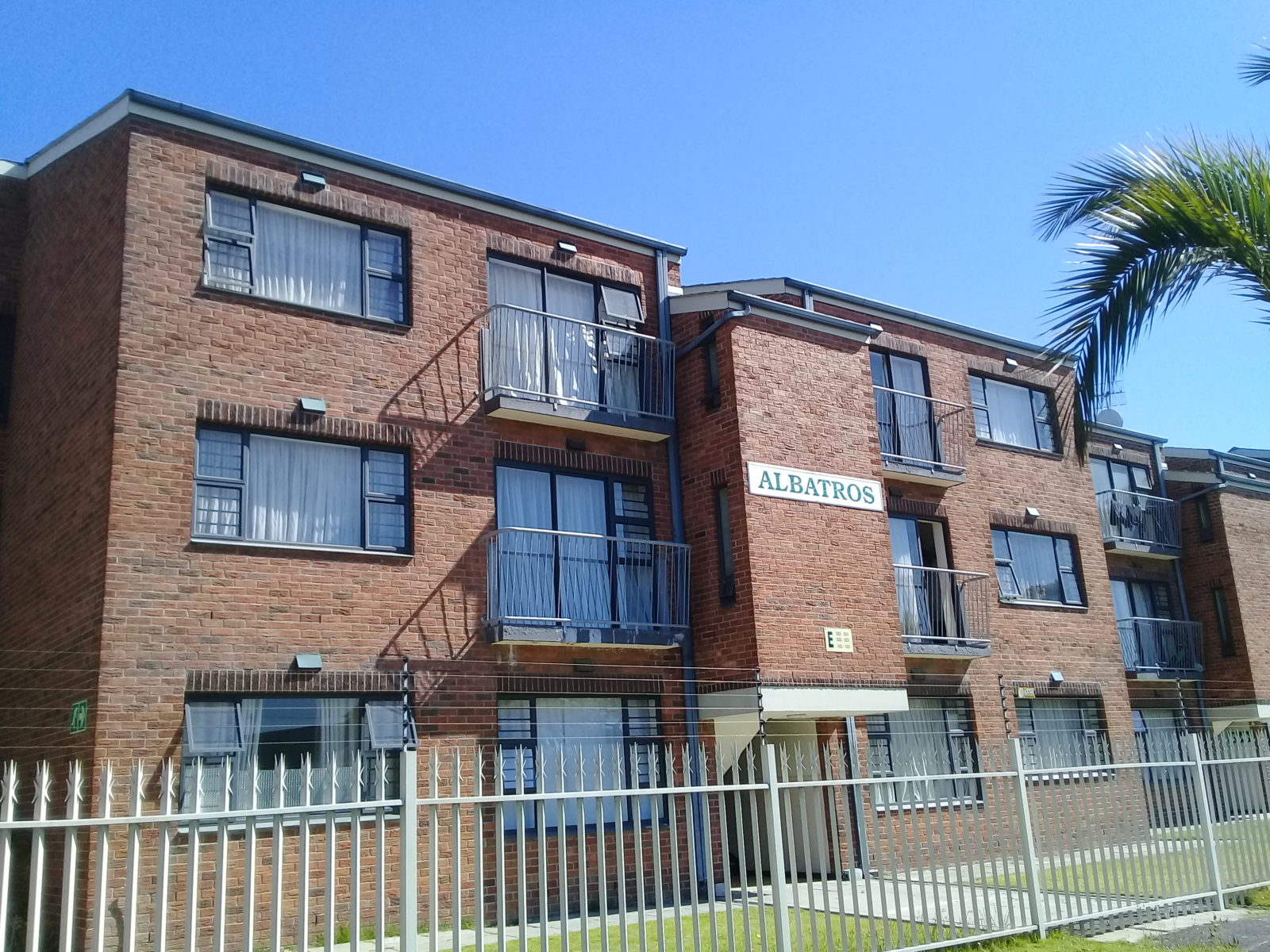 At present, 45 units across Communicare’s social housing complexes have been illegally occupied. This is Communicare’s Albatros complex in Thornton. (Archive photo: Marecia Damons)

Social housing company Communicare has been in and out of court trying to evict people who move into vacant units and then claim tenancy. At present 45 properties across Communicare’s Cape Town complexes have been so occupied.

There are also long-standing tenants who have called on Communicare to surrender the title deeds to them even though there is no legal basis for this and it would run counter to the purpose of social housing, as defined in the national housing code.

A group called the Ruyterwacht Community Association (RCA), which according to News24 represents over 500 tenants from Communicare’s Ruyterwacht complex (this figure may be exaggerated), is in court opposing their eviction. The RCA’s affidavit to the high court contains complaints from nine people living in Ruyterwacht. The case is currently postponed for possible consolidation with another similar case involving Communicare residents at their Albatros complex.

The RCA wants the eviction of its members set aside and either title deeds to the properties given to its members or their rent lowered. It also wants Communicare’s chairperson, CEO, and management suspended.

In its papers, RCA director Liziwe Ncayo alleges that some of the applicants, including herself and Philile Magqo, weren’t given reasons for why they should vacate their properties. Ncayo says that she “was sent on the 20th March 2019 a Cancellation and Notice to Vacate, without furnishing reasons to me”.

But Ncayo, Magqo, and fellow RCA director Nandipha Kalipa have a history with Communicare not mentioned in their court papers.

Both Ncayo and Magqo were once employed by Communicare and both left the social housing institution under a cloud. On 31 January 2019, Communicare sent Ncayo a notice that her employment as a lease administrator with Communicare had been terminated and she was given one month’s notice of termination of her lease with Communicare – “effective 28 February 2019, which will be the last day that you are permitted to occupy the property”.

Ncayo was fired after an independent disciplinary inquiry found her guilty of fraud and criminal conspiracy, while Magqo resigned before he could face an inquiry into allegations of fraud, theft, forgery, corruption, uttering and possible racketeering. Kalipa was found by forensic investigators to be a key figure in Ncayo’s alleged fraudulent activities.

Corruption allegations had been simmering in Communicare for some time and had been cited by City of Cape Town councillors as a reason for delaying the Salt River Market social housing development, which had been granted to Communicare to develop.

In 2018, Communicare hired an outside firm to examine the corruption allegations, as well as counter-allegations levied by the accused against Communicare’s board and executives.

According to the forensic report, Ncayo had been employed by Communicare for 12 years. Investigators had found strong evidence that Ncayo had been running a leasing scam, with people who wished to live in Communicare properties paying Ncayo to be accepted as tenants.

The report found that Ncayo was “circumventing the various protocols regarding affordability and residency” and “accepted various application forms from a ‘rental agent’ and current tenant residing in Sakabula Crescent in Ruyterwacht named Ms Nandipha Kalipa.”

Kalipa would funnel applicants to Ncayo, who would then approach her supervisor, Tozi Jaxa, to sign off on the leases. The investigators found evidence of “fraud, theft, forgery and uttering, corruption and/or potentially, racketeering” against Jaxa.

In 2018, 28 units were filled by Ncayo with people who would not have qualified on Communicare’s criteria. In all these cases, the new tenants had not provided basic documentation; some did not even provide copies of their identity documents.

Communicare, as a social housing institution, relies on finding good tenants in order to sustain its core mandate, which is to provide subsidised rentals on some of its properties to qualifying people. Communicare cannot afford to accept tenants that are at risk of defaulting on rent.

According to the disciplinary inquiry, when Ncayo realised that she was being investigated for corruption, she hatched a plan to draw attention away from her activities with Kalipa.

Evidence presented to the inquiry alleged that Ncayo and Kalipa targeted a colleague, a building supervisor they falsely believed had blown the whistle on them.

In October 2018, while out working, the building supervisor received a call from the Communicare office asking him to return to Ruyterwacht. Upon his return, he was arrested. He had been accused of raping a child. The alleged victim was a relative of Kalipa.

As the building supervisor was being taken to Elsies River police station, he recounted hearing Ncayo say, “Omnye Uwile, Kushiyeke Ababini” — or “one down, two to go”. Ncayo denies saying this.

The building supervisor had to move from his home in Ruyterwacht to live with relatives in Khayelitsha. Four months after his arrest, at Ncayo’s disciplinary hearing, the building supervisor told the inquiry that he was still living away from his family. Police spokesperson Captain FC Van Wyk told GroundUp that the case was still active and “has been remanded until 8 June 2021 at the Goodwood Magistrate Court”.

Many of the employees involved in the corruption allegations were offered polygraph testing. Some, like Ncayo, refused. She told GroundUp that she does not trust them.

The building supervisor did not refuse the test, and passed. (The reliability of polygraph tests is disputed, but they are admissible in court.)

The investigator found that Ncayo “failed to produce any evidence refuting the allegations made by the organisation”, that her “explanations were vague, and she often contradicted herself, rendering her evidence unreliable and creating doubt”.

Communicare accepted the recommendation of the inquiry to fire Ncayo, and Ncayo was served with a letter terminating her employment in January 2019.

Months after her dismissal, in August 2019, Ncayo founded the Ruyterwacht Community Association with Ian Witbooi, Mandisa Zamile, and Nandipha Kalipa.

Two of the nine applicants mentioned in the RCA’s papers were among those that the investigation found had been fraudulently admitted into Communicare housing units by Ncayo. According to a Rental Housing Tribunal application from March 2020, the RCA had mandates from 148 Ruyterwacht tenants; at least six of these tenants were placed in their units fraudulently, via Ncayo, according to the findings of the investigation.

What the former employees say

Ncayo disputes the findings of the forensic investigation and the inquiry. She told GroundUp that while she was employed at Communicare, her relationship with Kalipa was not that of a friend or conspirator and that Kalipa would merely send her applications from people who could not do so themselves. She says that she only got to know Kalipa properly after she had been fired and had started the RCA.

Kalipa, on the other hand, told GroundUp that she “never had any dealings with [Ncayo] not now not before … Liziwe — I only knew her in when I was selling shoes as she bought boots.” She also said that she would sue GroundUp.

Yet the forensic investigation found many dozens of emails between Ncayo and Kalipa dating back to 2017, and both are founding members and directors of the RCA.

When asked for comment, RCA spokesperson Zamile denied there was ever a disciplinary hearing or that employees were found guilty. She said there was a CCMA settlement with Communicare which is “sub judice” because of the “sensitive nature of the evidence”. “The affected employees decided to leave the employment of Communicare as the working relationship between them could not be reconciled and by mutual agreement, they decided to part ways.”

But we have confirmed that the investigation and inquiry definitely took place (we will not be publishing them due to highly sensitive material). Ncayo’s letter of termination can be read here.

Ncayo also said that she was not the person responsible for processing applications. That responsibility lay with her former supervisor, Tozi Jaxa. Jaxa resigned from Communicare before he could face a disciplinary inquiry. However, Communicare told GroundUp that Ncayo did all the initial screening of possible tenants, and forwarded her recommendations to Jaxa.

Ncayo said that she took her case to the CCMA, but that her case was dismissed after Jaxa failed to appear in her defence. Communicare said that this claim is untrue.

Ncayo also said that she and her fellow RCA directors formed the association after they witnessed the “forceful” eviction of Magqo. But Communicare told GroundUp that Magqo was never evicted. He did however resign when disciplinary charges were brought against him.

Ncayo also said that Communicare’s attorneys offered her a plea deal whereby she would keep her job if she testified against Jaxa and Magqo, but Ncayo said that she refused as she had nothing to say about them.

She said she had nothing to do with the rape accusations against the supervisor. She did not know what happened to the case subsequently and said that she had not discussed the case with Kalipa.

We attempted to reach Magqo via an old known phone number, and through the RCA, but no response was forthcoming.

According to Neville Petersen, spokesperson for the Communicare Tenant Beneficiaries Albatross (CTBA), the allegations against the members of the RCA and the independent report were “a smear campaign”.

He said the CTBA is contemplating joining the RCA in court. It also wants to stop Communicare from evicting its representatives in the Thornton Albatross complex.

Petersen confirmed that RCA and CTBA are working together and that the groups have the same demands, including demanding the transfer of title deeds.

On 15 March, the CTBA’s attempt to overturn a November eviction order was struck from the roll of the Western Cape high court. According to Petersen, this came after their advocate reported that the file was stolen. But according to Communicare, it was due to a no-show from CTBA’s representatives. Petersen said that the CTBA will be re-enrolling the matter in the high court. DM