By Daneel Knoetze for Viewfinder• 12 April 2021 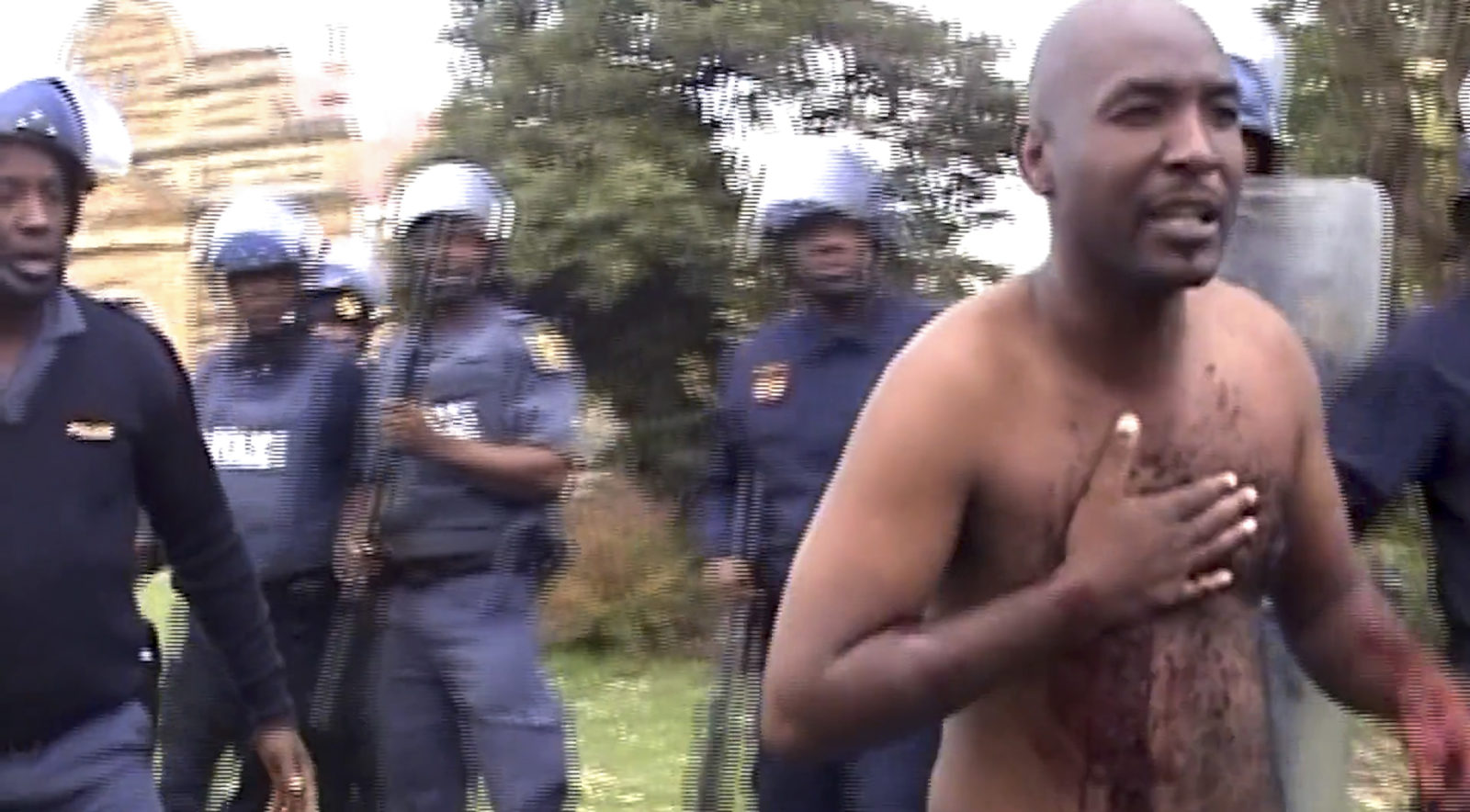 A screengrab from the video which captured the police assault and shooting of Andries Tatane on 13 April 2011. (Screengrab: Karabo Chaka)

Ten years ago today, Andries Tatane died after being shot with rubber bullets at close range by police in Ficksburg. The officers who stood trial for the killing were acquitted and kept their jobs. Last month, Mthokozisi Ntumba was shot and killed under similar circumstances. Viewfinder’s analysis of hundreds of crowd management-related complaints against the police reveals that police are not accountable for the alleged misuse of rubber bullets. The anonymity afforded by riot gear and the vagueness over the use of rubber bullets at close range still protects Public Order Police officers from consequences.

There is no accurate statistic for the number of people killed by rubber bullets fired by police in the 10 years since Andries Tatane’s death was broadcast on television. Yet, some of the main contributing factors in Tatane’s killing – and in the acquittal of his alleged killers – have been left unchecked. People have certainly been killed in similar ways by police as a result. Some of them, like Mthokozisi Ntumba, we know about. Many, we do not.

On the morning of 14 January 2013, just a few weeks before the officers accused in Andries Tatane’s killing were acquitted in court, Public Order Police units were deployed to De Doorns in the winelands of the Western Cape. They were sent to contain the second wave of a strike by farmworkers.

The units’ occurrence books recorded the morning’s patrols in Stofland informal settlement: when strikers gathered and threw stones; when the police traced and arrested “suspects” and when they fired rubber bullets “in self-defence”.

For instance, at 7.55am, a warrant officer and his team of constables collectively fired 30 rubber bullet rounds. By the day’s end, police had fired a total of 416 rubber bullets.

Omitted from the police report is the fact that one of the rubber bullets fired that morning ended up embedded in the forehead of Letsekang Thokoane, a 25-year-old shopkeeper from Lesotho who was not even participating in the strike.

When POP members descended on Stofland, Thokoane had locked up his shop and fled. There were eyewitnesses when he was caught, assaulted, dragged into a half-built house and shot in the head with a rubber bullet, then dumped in a ditch by police. He later died in Tygerberg Hospital. And still, the Independent Police Investigative Directorate (IPID) could not get to the bottom of it.

When interviewed for Viewfinder’s documentary about Thokoane’s murder, A Killing in the Winelands, the directorate’s head of investigations, Matthews Sesoko, said that eyewitnesses interviewed by IPID could not identify the killers in De Doorns.

In such cases, the officers’ identities were often obscured by their helmets and visors. He drew a comparison with the Tatane case, where eyewitnesses recanted their identification of officers involved in the shooting in Ficksburg. This led to the acquittal of the accused.

Identification of POP officers accused of brutality is a perpetual problem for IPID investigators. So too, Sesoko said, is the impossibility of using ballistics testing to link specific rubber bullets – such as the one that hit Tatane in the chest, or the one that hit Thokoane in the head – to the firearms from which they were fired.

“(Police) procurement should be in such a way that rubber bullets that they use can be identified to a particular firearm,” said Sesoko. He went on:

“If that police officer had a number, then (the victim) will be able to say, ‘I was shot by a police officer wearing uniform number 1’. Then you know where to go. So, these are the kind of recommendations [that] will assist us in those situations. Unfortunately, that has not happened as yet.”

Last month, police minister Bheki Cele and police commissioner Khehla Sitole presented a report by a panel of experts on policing and crowd management, commissioned by the minister following the Marikana commission of inquiry. The report highlighted that the anonymity of individual POP members undermined the potential for accountability. It recommended that SAPS ensure that each POP member’s helmet carries a clearly identifiable number.

In fielding questions at the report’s presentation, Sitole said that there is “accountability at all times, for all actions” during crowd management operations. He later went on to confirm that the officers accused in Tatane’s killing were not fired, following a departmental process, and that SAPS retained some of them on active duty in POP.

“After each and every public order event there is a report that is compiled by the commander,” said Sitole.

“We look through that particular report, then we will take the necessary action. That report is also then transferred or escalated to IPID. Should we find that such commanders have faulted and violated the prescripts, then we make sure that we commission internal investigations.”

Sitole’s office did not respond to a request for verification of how many POP commanders or officers have been held “accountable” by SAPS following such IPID or “internal” investigations. Yet, the answer, according to Viewfinder’s analysis of IPID case data, appears to be virtually none.

From IPID’s master case intake registers for the years following Tatane’s killing, April 2012 to March 2020, Viewfinder isolated a sample of 1,157 cases where the police’s use of rubber bullets was mentioned in complaint descriptions.

The complaints consist of assault and shooting allegations. It’s not possible to say how many injuries resulted from rubber bullets, but some of the complaint descriptions contained descriptions of serious injuries, such as rubber bullets being embedded in people’s bodies, children being hospitalised and people losing eyes.

Excluded from the sample were 80 death incidents attributed by IPID to the use of “service firearms” during crowd management operations, because these cases often do not distinguish between rubber bullets and live rounds causing deaths.

According to IPID’s master registers for criminal and disciplinary convictions over the same period, not a single officer was disciplined or criminally convicted for the misuse of rubber bullets for any of the cases in the sample.

Viewfinder has previously revealed some of the reasons police accountability following IPID investigations is so low. When it comes to the alleged misuse of rubber bullets, the ambiguity around the rules of engagement for officers using these weapons adds another layer of complexity to these statistics. Even if they could be identified, it would be difficult for officers to be convicted for breaking the rules surrounding the use of rubber bullets, because few clear rules exist.

The police’s national instruction for crowd management allows for the use of rubber bullets as a means to “disperse” crowds (when less forceful methods have failed). The expert panel pointed out that this created an opening for police to use rubber bullets indiscriminately – against violent and non-violent members of a crowd. The panel recommended that police adopt a principle of “differentiation” to ensure that police do not target non-violent members of a crowd.

The national instruction for crowd management also does not prohibit police from using rubber bullets at close range or from aiming these at people’s faces – factors that substantially increase the risk of death and serious injury.

The expert panel recommended that the use of rubber bullets at close range and aimed at people’s upper bodies be prohibited.

At the presentation of the report last month, Sitole said that standard operating procedures for the use of bullets would be introduced in light of these recommendations. For people who have lost family members, or who have been permanently maimed by rubber bullets in the 10 years since Tatane’s killing, this will come as little consolation.

“Those police who shot me are still in their jobs, but what about us? We can’t find work. This damage is permanent,” said Mzukisi Mdlulwa, who lost his eye to a rubber bullet when police raided his street in Stofland during the farmworker strike.

“Justice will be served if the police are fired or if they go to jail for what they have done. We must all be the same (before the law).” DM/MC

This article was first published on Viewfinder.

This article forms part of an ongoing series on alleged police criminality and police oversight in South Africa. It was made possible, in part, by a grant from the Henry Nxumalo Fund for Investigative Reporting. This article is edited and partly funded by GroundUp.