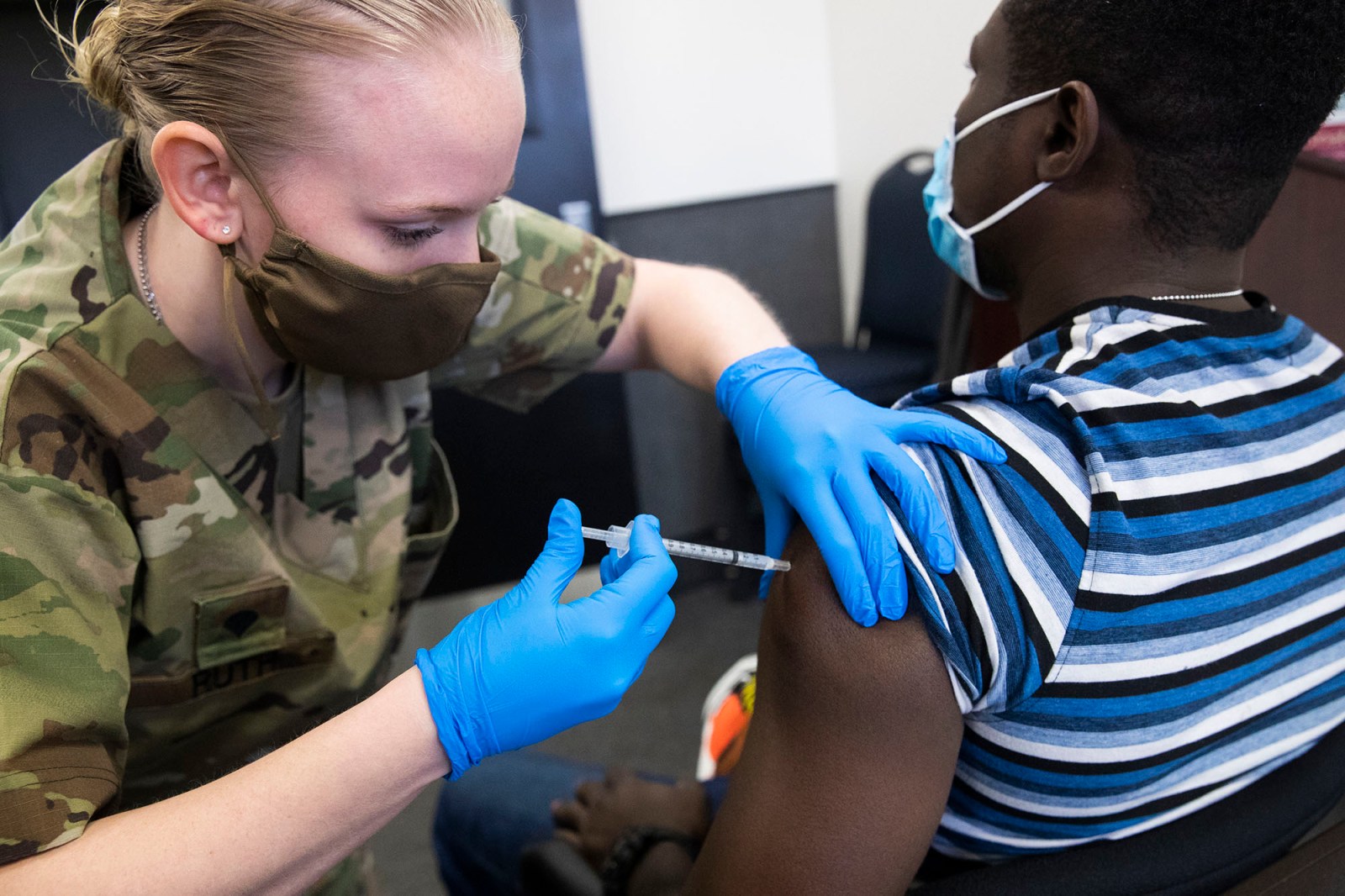 US Army Combat Medical Specialist with the Maryland National Guard Medical Detachment, Alexis Ruth (L), administers a dose of the Moderna COVID-19 vaccine at Camp Fretterd Military Reservation, where members of the military and their dependents are being vaccinated, in Reisterstown, Maryland, USA, 01 April 2021. EPA-EFE/MICHAEL REYNOLDS

By Saturday, 10 April, a third of US adults had been fully vaccinated and at least one in four had received at least one of their two-dose inoculation. But there are still hotspots, including the state of Michigan where locals have been warned to avoid meeting face-to-face.

While the number of vaccinations around America keep growing, the number of people dying of coronavirus continues to fall, but an increase in positive cases last week reminded everyone of the need to keep being careful. The director of the US Centers for Disease Control and Prevention said last week the B.1.1.7 virus variant, first detected in the UK, is now the dominant strain in the US.

Michigan, with a population of just under 10 million, averaged 6,763 new cases a day last week and on Saturday reported 6,900 cases and 74 deaths. It has been dealing with rising cases for about six weeks. In an interview on Sunday, governor Gretchen Whitmer said she was encouraging the White House “to think about surging vaccines into the state”.

The governor has called for residents to hold back on family gatherings and social get-togethers as cases spike, asking them to refrain from gathering socially for two weeks – including for indoor dining and sports events – to try to control the surge. While there was light at the end of the tunnel, “the recent rise in cases is a reminder that we are still in the tunnel”.

While Whitmer called on residents to “pause” face-to-face activities, she did not issue an order. Previous orders drew intense pushback.

The B.1.1.7 variant is reportedly at the centre of Michigan’s rise in Covid-19 cases. This strain was found to be more infectious and more lethal than the original SARS-CoV-2 and was reported by the end of March 2021 to have been found in at least 94 countries.

Despite White House officials admitting on Wednesday, 7 April that Michigan’s numbers were worrying, they did not commit to sending more vaccines to the state. But on Friday Washington changed tack, saying it would rush federal resources to Michigan to support the vaccination.

When discussing the surge in cases with Whitmer, President Joe Biden spoke of “helping Michigan better utilise doses already allocated” to it, rather than sending additional doses. A White House Covid-19 coordinator told the media they would stick with their allocation system and look into helping Michigan to administer vaccines more efficiently.

The state has also seen an increase of cases among school children, which some medical experts say is probably due to a combination of schools opening and the new coronavirus variants.

As Michigan looks set to record its highest numbers since the start of the pandemic in 2020, the neighbouring state of Wisconsin is also worried about a potential spike as it recently dropped its mask mandate. This concern is born out by Marianne Udow-Phillips of the Center for Health and Transformation at the University of Michigan, who said the Michigan increase follows the relaxation of public health orders and the associated activities and behaviour that followed: “The increase in cases really quickly followed the relaxation of  those orders… People let their guard down.”

The US administration is under pressure to speed up allocation of vaccinations to hotspots, with the former commissioner of the US Food and Drug Administration, Dr Scott Gottlieb, saying on Sunday they needed to “get into the habit of trying to surge resources” into areas where case numbers are rising.

According to CNN’s interactive US Covid vaccination tracker, about 183 million doses have been administered, or 56 per 100 people.

While the vaccine roll-out is going smoothly and all infrastructure and logistics hiccups seem to have been resolved, vaccine hesitancy has emerged as possibly the biggest barrier to the US achieving herd immunity, despite the country leading the race globally in this area.

Some polls and researchers suggest those adult Americans willing to be vaccinated, will possibly all have been vaccinated as soon as the end of April.

White Republicans are still found to be the most reluctant to get jabbed. In February it was reported that almost a third of US military troops had turned down the vaccine. Late last week, US media were filled with reports that about 40% of US marines have declined. About 48,000 marines are reported to have said no to the vaccine, while around 75,500 have been vaccinated.

A Marist Poll of 1,309 adults in the US aged 18 and up, conducted between 22 and 25 March, found that one in four adults did not want the vaccine. DM