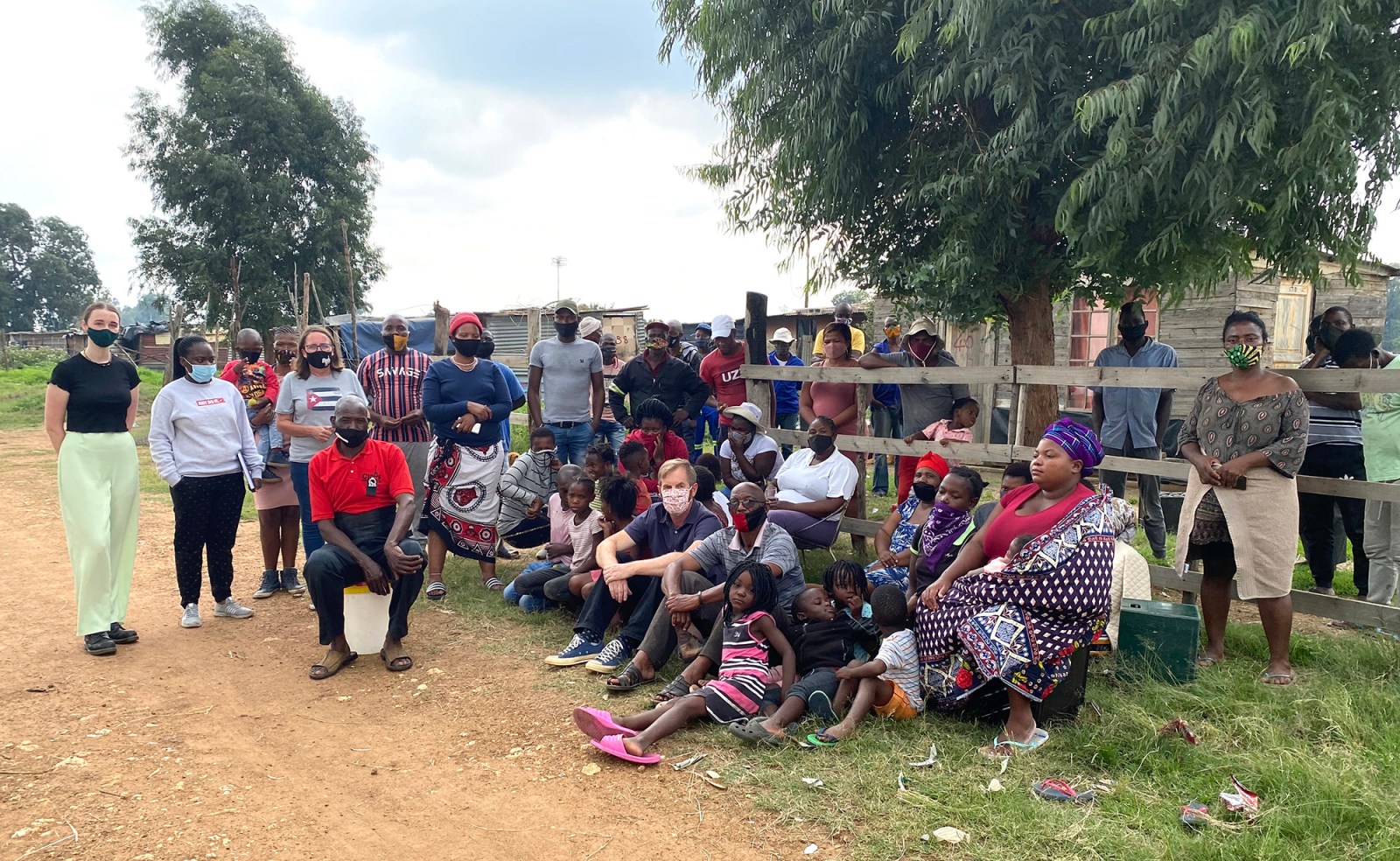 Residents of Happiness Village with their legal team. Picture: Supplied

Residents of an informal settlement on military-controlled land say the army is trying to drive them out.

From being forced into the river and held there for hours to being made to roll in mud, and having firearms and grenades being discharged around their village on occasion, residents of Happiness Village (an informal settlement outside Johannesburg) have described the nights of terror they face as, they claim, the army tries to force them to leave the area.

As their stand-off with the military continues over their occupation of land where soldiers are trained, residents of Happiness Village have described how soldiers have “raided” their village twice this year despite several interdicts granted to prevent this.

Residents are now suing the military and have again successfully applied for a court order to keep the soldiers away from the homes – one of several interdicts obtained since 2017.

The application was brought by community leader and former soldier Chris Koetsioe, as well as other members of the community.

About 600 residents of the Marievale community were first evicted from the military base they had occupied when it fell into disrepair in November 2017.

They subsequently set up a village outside the military base but it was on land controlled by the military and used for training exercises.

Many members of the community took up an offer from the municipality to leave the area and move to Zamani in Duduza township. But some decided to stay.

Since then, the community has asked the court several times for protection against the soldiers.

“In July 2020, soldiers from the Marievale Military Base laid siege to Happiness Village when they blocked the access roads by digging trenches across the roads and setting up a military access control gate. Needless to say, these actions were in direct violation of the earlier court orders,” Koetsioe said in an affidavit.

“On the night of 21 July 2020, the soldiers shot flares [and] smoke grenades, and discharged rifles and other firearms in and around Happiness Village. This was one of the most frightening experiences of my life as it sounded like an armed attack on the village,” he added.

This led to more litigation. Another court order to stop the military coming into the village was obtained by Lawyers for Human Rights, acting on behalf of the community.

But on 7 February 2021 the soldiers returned, Koetsioe said. “A group of 100 soldiers from the Marievale Military Base, armed with R4 assault rifles and pangas, approached Happiness Village and started assaulting residents and demolishing shacks.”

According to an agreement between the army and the community, no new shacks were to be constructed in the area. This is what the army claimed it was investigating.

“Later that day, at around 7pm, a larger group of soldiers returned,” Koetsioe said. “I was at the communal shower when I heard community members screaming and shouting. When I went outside to investigate, I saw a group of 60 soldiers, some of them armed with assault rifles… I made my way to the tuckshop, fortunately undetected by the soldiers. As I stood there, I could see groups of soldiers surrounding some of the community’s houses and start breaking them down.

“Some of the residents who gathered in the street tried to chase the soldiers away by throwing stones at them,” he said. He was called by a neighbour, Nocks Gijane, and told to hide in her house.

“During that time, I could hear the chaos and gunshots outside. As a former soldier I recognised the sounds of 9mm pistols and R4 assault rifles.” He said they phoned the police but the police didn’t have transport available. “I also phoned our lawyer, Louise du Plessis.”

He continued: “That same evening, Gijane called an ambulance… Unfortunately the ambulance never arrived and the injured residents were too scared to leave Happiness Village in fear that they would be ambushed by the soldiers.

“The soldiers continued to patrol the streets, harassing residents, and chasing some of them. One of them, a young woman, was terrified when about 15 soldiers chased her into the veld. She ran as fast as she could until she was too exhausted to continue and the soldiers caught up with her. When she stopped, the soldiers grabbed her and threatened that they would assault her. She has been frightened to return to her home in fear that the soldiers will return.”

Resident Bulelani Magaba said the soldiers took his toolbox, with a saw, hammer, nails and pliers, that he used to repair the village’s shacks.

Fernando Mukuque said in papers before the court that he was hiding under his bed when the soldiers started breaking down his house. “I was still hiding under my bed when the whole shack fell on top of the bed. Needless to say I was petrified. After about an hour … I tried to get out of the ruin as I thought the soldiers were gone. I heard women talking and thought they were members of the community.

“Feeling safe, I then crawled out from under the bed and I went to them to greet them… When I asked them what was happening, I realised that they were female soldiers. They then grabbed me and called three male soldiers closer, who then proceeded to beat me with pieces of iron rods outside, next to my house.”

He said he was forced to roll in the mud at the communal tap with another resident, Themba Mapanga, who was also beaten up by the soldiers.

“There were more than twenty soldiers surrounding me. They kicked us.

“The soldiers said that Themba Mapanga and I must beat each other to train like soldiers. They asked us why we were refusing to move… We said we don’t have houses there and we will not be safe there.

“The soldiers who brought me to the mud patch must have seen my ZCC [Zion Christian Church] robe at my house because after forcing me to roll in the mud they ordered me to pray aloud. This ordeal took a long time, maybe three hours.

“Afterwards, they forced Themba Mapanga and me to walk down to the river with them. I was really afraid that they wanted to kill us. When we got there they ordered me to walk into the water. They then told us to wash the mud off our bodies.”

The South African National Defence Force’s Lt-Col Lawrence Khulekani Mbatha denied all allegations of torture and assault in papers before the court. He said they were breaking down new shacks as per their agreement with the community.

“Marievale is a military base. It is a highly sensitive and classified area. Marievale military base has many sorts of military weapons; explosives and ammunition are stored there. This is for purposes of military exercises,” he said.

He said they believed that illegal miners were being housed in the village and these illegal mining activities were causing a considerable threat to the army base.

“I have been advised that some of the illegal miners are former soldiers as per the intelligence information, therefore, this is a serious risk to the military base and military personnel staying in the area.”

He said that, for this reason, they had proposed that the area be fenced. DM168