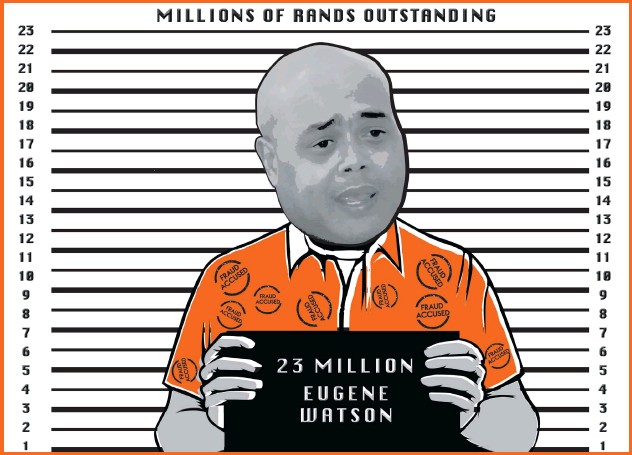 A Johannesburg-based businessman has accused Eugene Watson, the former head of the Road Accident Fund, of acting fraudulently and dodging R23-million in debt payments.

Eugene Watson, the former CEO of the Government Employees’ Medical Scheme (Gems) and the Road Accident Fund (RAF), is facing a criminal case of fraud and theft in connection with millions of rands he owes to a Johannesburg-based businessman who invested in his advisory and consultancy firm.

Yasas Jayakody, the managing director of project management firm Aquila Projects, has accused Watson of failing to honour payments totalling R23-million (excluding accrued interest) – linked to a series of investments that he made in Watson’s firm, starting in 2018.

Jayakody told DM168 he was enticed into investing in Watson’s firm, Watson Consultancy, with the promise of “lucrative returns”. The returns would be generated from the investments Watson Consultancy makes in businesses across various sectors including healthcare, insurance and litigation funding. Jayakody has also accused Watson of acting fraudulently because he has repeatedly missed self-imposed deadlines to pay returns (capital amounts invested and interest) when they fall due.

On Wednesday, 7 April, Jayakody opened a criminal case of fraud and theft against Watson at the Randburg Police Station in Johannesburg, saying that Watson has “no intention of paying back the funds”. Watson didn’t respond by the time of writing to DM168’s requests for comment via text messages and an emailed list of questions.

Watson is arguably well known in medical and business circles. A qualified medical doctor, Watson served as CEO of Gems, which provides healthcare insurance and benefits to South Africa’s public servants, from its 2005 inception until 2012. He was later appointed as the CEO of the RAF, a state-supported insurance fund that provides compensation to the victims of road accidents. Watson stepped down from the RAF top job in 2017.

Since then, Watson has been a director of his firm, Watson Consultancy, which is involved in, among other things, RAF payout claims submitted by lawyers on behalf of victims of road accidents.

Watson Consultancy provides working capital or funding to lawyers who deal with victims instituting claims against the RAF and require pre-funding for their medical-related expenses. Litigation of this nature is costly because it usually takes an inordinate amount of time for RAF matters to be settled by courts and for victims to receive payouts. Watson Consultancy funds lawyers to sustain the litigation and is ultimately repaid from the payout that RAF victims receive.

The initial meeting with Watson

Jayakody met Watson in October 2017 when his firm (Aquila Projects) was part of Black Umbrellas, which is a mentorship and incubation programme that helps entrepreneurs to develop and grow their businesses. Under the programme, Watson was allocated to Jayakody and his firm as a mentor. “Through the incubation hub, Watson was privy to Aquila’s management accounts including cash flows, business pipeline, key clients, etc. I requested guidance from Watson as our mentor on how and where to invest some of Aquila’s working capital,” said Jayakody.

Watson then pitched a “lucrative investment opportunity”, whereby Jayakody’s Aquila would invest funds in his business venture involving RAF claims, with the promise of receiving returns that “would be better than most commercially available investment vehicles”.

“Watson used to be the CEO of the RAF, which would explain his knowledge concerning RAF litigation, which inspired confidence in me to invest.”

Jayakody initially made two investments in Watson Consultancy: R450,000 and R900,000 on 23 April 2018 and 24 July 2018, respectively. Jayakody said these funds were repaid (with interest) by Watson within agreed timeframes.

Watson Consultancy would be required to honour the first repayment on 26 February 2020, with the repayment carrying an annual interest rate of 21% on the initial amount invested, and a penalty for late payments. The penalty would be calculated at the prime lending rate plus 2%. DM168 has seen copies of the agreements, entered into by both parties, detailing the terms and conditions of the funding provided by Jayakody. Under the agreement, the last payment by Watson Consultancy to Jayakody would be on 20 December 2020 (see below).

Watson informed Jayakody on 6 March 2020 that he was facing delays with sourcing funds to pay him, blaming slow RAF processes in administering payouts to victims, and later, the Covid-19 pandemic. All repayment deadlines under the investment agreements were missed, sparking negotiations and email exchanges between Jayakody, Watson and their respective lawyers to recover the monies owed and agree on new repayment dates.

In email exchanges between all parties, which were seen by DM168, Watson acknowledges that payments to Jayakody are outstanding and that he has reneged on every self-imposed deadline. In an email dated 9 February 2021, Watson wrote to Jayakody: “I have not done right by you and am guilty of having not repaid you… As long as I have breath in me, I will not stop until I have repaid you in full as soon as possible, even with your remedial [legal] action [to recover funds].”

Watson has made three partial payments, totalling R803,000, but the bulk of the debt remains outstanding. Watson has signed six acknowledgment of debt agreements, the latest of which specifies that more than R22-million has to be paid by 13 February 2021. Watson also missed this deadline. On 15 March, new payment timelines were negotiated between Jayakody, Watson and their lawyers, in which Watson would pay R3-million by 31 March 2021; R10-million by 30 April 2021; R7-million by 31 May 2021; and R3-million by 30 June 2021. Jayakody said Watson has not honoured his promise. “As of 7 April 2021, Watson Consultancy has not met the agreed payment arrangements,” he said.

Without the payments from Watson, Jayakody said his firm is in financial trouble. “Watson has severely damaged our reputation and integrity both professionally and in my private capacity. Aquila is under severe financial and legal pressures [owing] to … Watson Consultancy’s inability to return our investments but more importantly [because of] Watson’s criminal conduct.” DM168