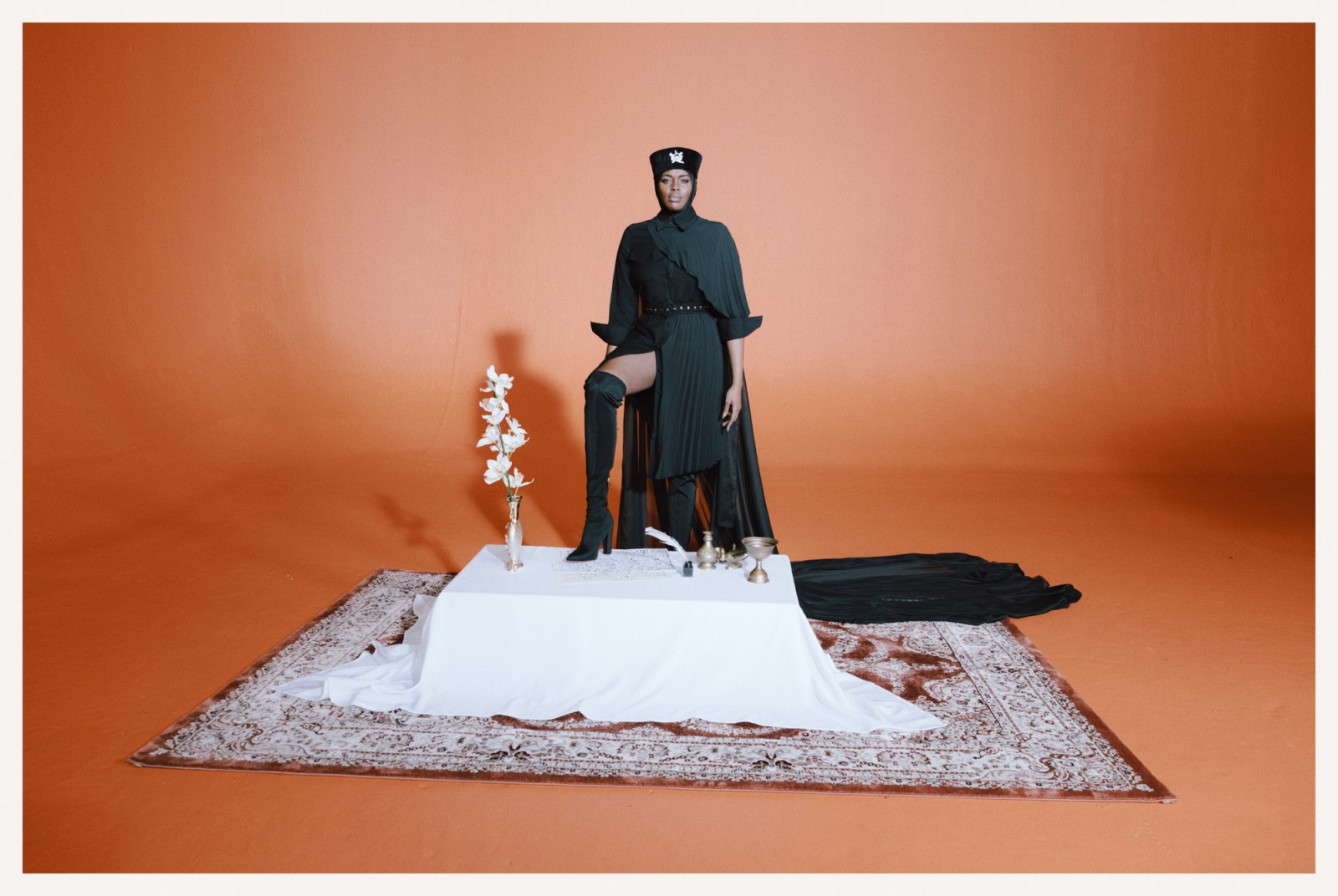 The 2019 LVMH Prize winner Thebe Magugu is not one to rest on his laurels. For his latest collection, experimental textile collaborations might just see him continue his groundbreaking streak.

When fashion designer Thebe Magugu started working on the central print for his autumn/winter 2021 collection, Alchemy, the question “what’s next?” was on his mind, and he called on recently initiated sangoma and fashion stylist Noentla Khumalo to throw the bones, as it were, in search of the answer. “She came to the studio and she laid out her mat and she threw her bones with the question, ‘what’s next?’ I think we’re all very curious about what’s next; I think things have been so much in flux that we’re all actually just yearning for a bit more clarity,” explains Magugu.

Once she had thrown the bones, shells, crystals and other objects, Magugu asked her not to tell him the answer: “I told her I would rather not know, I’d rather let it be up to the wearer, if that makes sense. I want whoever purchases this garment… I want them to sort of draw that conclusion on their own just from the image and the feeling that they get from the garment.”

Instead, the designer photographed the objects the sangoma threw on the mat, and got to work playing around with the elements, making some bigger, some smaller, and tweaking the colours. “I’m [interested] in the changing [attitudes] towards African spirituality, and the idea of ukuthwasa,” says Magugu, referring to the process through which sangomas receive their calling and training. “Among the youth it wasn’t really something that was spoken about, like it was this strange sort of secret shame; but I feel like the stigma around ukuthwasa is sort of breaking down as people embrace it a bit more. And I knew I wanted to have a headlining print that sort of spoke to this idea. And if I’m doing African spirituality, I needed to collaborate with traditional healers, a sangoma, to authentically contribute to the collection,” he explains.

This infusion of culture, a South African narrative and an innovative approach to textiles is a big part of what led the designer to winning the LVMH prize in 2019 over thousands of young designers from across the globe, and becoming the first entrant from Africa to win the prize, as well as launching his career to international acclaim and media coverage by some of the most respected fashion media publications.

“I still struggle to speak about it a lot of the time, because the way my life has been… I feel like a lot of the things that are happening weren’t meant for me, if that makes sense. Because there was just so much lack in terms of resources and opportunity. My mom worked incredibly hard, but even so… Over the years, you sort of take away the big dream and you start thinking about the practical… The past two years have almost been like an extreme rejection of that, and it took a bit of time to get used to it. It’s all these sorts of things that I dreamt of as a teenager, but as I grew up, I started thinking that’s obviously not meant for me. The paradigm shift to change that mentality has actually been weird and sort of challenging. I am just so… I’m so thankful,” says Magugu.

Indeed, the past couple of years have brought him moments young designers around the world can only dream of. Most recently, a dress from one of his previous collections was acquired by the Met for its permanent collection. “There’s also dissociation, and I find that I feel it sometimes, like when I got the email from the Met or when I got an email from [Vogue editor-in-chief] Anna Wintour, it’s almost as if this is happening to someone else and I’m responding for them. It’s crazy, but that’s exactly what it is. But also, that being said, I appreciate that sort of dissonance because I think it’s so dangerous when people overly tie the success of their business or brand or company to their actual identity,” reflects Magugu.

The Thebe Magugu brand now gets to show at Paris Fashion Week on the official schedule, and his collections are sold at stockists around the world including China, Nigeria, Japan, New York, Italy, Spain, London and France. However, even as his business grows, Magugu says he is particularly proud to find that when it comes to online sales, the brand has significantly grown its South African following: “The wholesale side of my business is more international facing, but my online store is [approximately] 85% local, which is incredible, it’s really incredible.”

The collaborative print with Noentla is one of six looks from the Alchemy collection that the designer has entered into yet another prestigious fashion design competition, the International Woolmark Prize. He has already made it to the group of the top-six finalists, and the collection is being judged by supermodel Naomi Campbell and other leading names in global fashion media. In putting together the other looks, he has continued to collaborate with various artisans in innovative ways.

One such collaboration included burying wool underground for a few weeks. Says Magugu: “I worked with an eco-textile maker in Ladysmith, her name is Larisa Don. For some strange reason, I am quite a big fan of corrugated iron as a motif. I keep on going back to the idea of corrugated iron. In past collections, I’ve had corrugated iron as a print, but with this one, we wanted to revisit it in a more experimental way. We took white merino wool and sandwiched it between two sheets of corrugated iron, and then we sort of [buried it underground] and let that rust over a few weeks. Then we uncovered, washed and treated it, so that it’s a wearable fabric and comfortable. It came out so beautiful, in all these oranges and browns.”

For another print, Magugu and Don took the imphepho plant, largely believed to chase away bad spirits and to facilitate communication with one’s ancestors, as well as cannabis leaves and “flower-pounded” them onto textiles, a technique of using heat, pressure, and chemicals to transfer the colour and shaped of the flowers directly onto fabric. For another, he worked with a company in the Netherlands to translate African scarification practices onto textile as a proverb written in Braille. “It was for the proverb that says, ‘what you do for your ancestors, your children will do unto you’. I’ve always loved that quote; so the scarification on the back of the jacket also doubles as Braille for that,” says Magugu. For yet another textile development he collaborated with the revered Japanese textile maker Adachi San, “he made the fabric by hand… he does it on a loom; it’s this black wool fabric with white pinstripes peppered with these rayon pom poms onto the surface of the fabric.”

As for “what’s next?”, the designer is happy not knowing what Noentla divined from the bones. With his team and collaborators he is putting in the work and creating the future; building the business, as well as finalising new textile developments that will be part of the Alchemy collection, which will soon be judged for the Woolmark Prize, which, if he wins, will be another first for South African fashion design. DM/ML