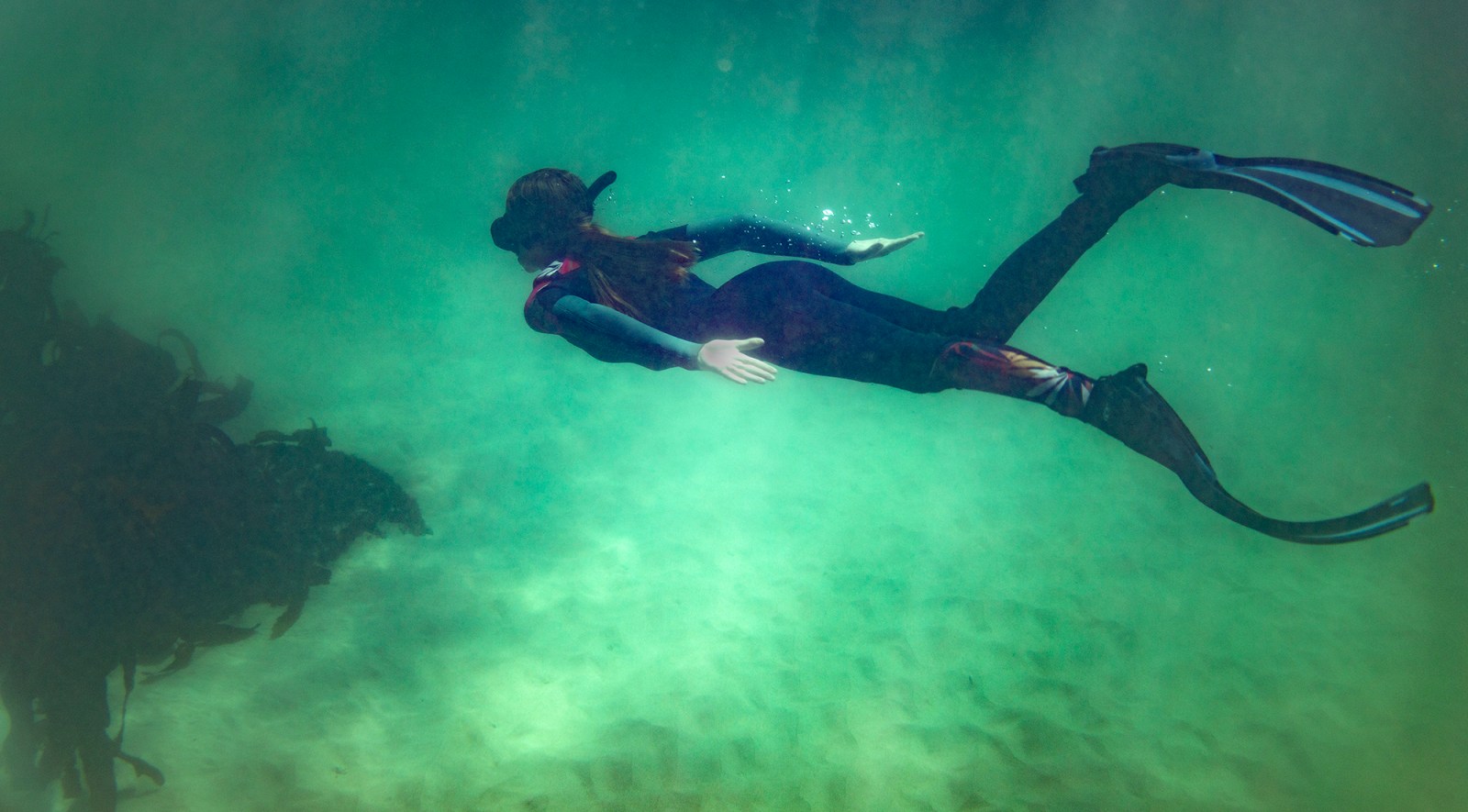 A free diver approaches a Kelp forest in the Indian Ocean, False Bay, Cape Town, South Africa, 21 March 2020. Huge Kelp forests can extend up to three kilometers offshore of South Africa's cape coastal waters. Kelp are the giants of the seaweed world being the fastest growing algae sometimes exceeding fifteen meters in length. The Kelp forests influence the waters around them by calming the waves, slowing the water and thus allowing it to be warmed by the sun. This creates a unique marine environment popular with free divers in which thousands of species thrive beneath these giant tree like structures. EPA-EFE/NIC BOTHMA

A network of hydrophones studies the seas during a time when they are unusually quiet.

Travel and economic slowdowns as a result of the Covid-19 pandemic have combined to put the brakes on shipping, seafloor exploration, and many other human activities in the oceans, creating a unique moment to begin a time-series study of the effects of sound on marine life.

A community of scientists has identified more than 200 non-military ocean hydrophones worldwide and hopes to make the most of the unprecedented opportunity to pool their recorded data into the 2020 quiet ocean assessment and to help monitor the ocean soundscape long into the future. They aim for a total of 500 hydrophones capturing the signals of whales and other marine life while assessing the racket levels of human activity.

Combined with other sea-life monitoring tools and methods such as animal tagging, the work will help to reveal the extent to which noise in “the Anthropocene seas” affects ocean species.

Sound travels a long way in the ocean, and a hydrophone can pick up low-frequency signals from hundreds, even thousands, of kilometres away. The highest concentrations of non-military hydrophones are along the North American coasts – Atlantic, Pacific and Arctic – Hawaii, Europe and Antarctica, with some scattered through the Asia-Pacific region.

For more than a century, navies have used sound to reveal submarines and underwater mines and for other national security purposes. Marine animals likewise use sound and natural sonar to navigate and communicate across the ocean.

But the effects of human-generated ocean sounds on marine life remain poorly understood.

“Assessing the risks of underwater sound for marine life requires understanding what sound levels cause harmful effects and where in the ocean vulnerable animals may be exposed to sound exceeding these levels. Sparse, sporadic deployment of hydrophones and obstacles to integrating the measurements that are made have narrowly limited what we confidently know.”

Year of the Quiet Ocean

In 2011, concerned experts began developing the International Quiet Ocean Experiment (IQOE), launched in 2015 with the International Quiet Ocean Experiment Science Plan. Among their goals: create a time series of measurements of ambient sound in many ocean locations to reveal variability and changes in intensity and other properties of sound at a range of frequencies.

The plan also included designating 2022 “the Year of the Quiet Ocean”.

Because of Covid-19, however, “the oceans are unlikely to be as quiet as during April 2020 for many decades to come”, says project originator Jesse Ausubel, director of the Program for the Human Environment at The Rockefeller University.

“The Covid-19 pandemic provided an unanticipated event that reduced sound levels more than we dreamed possible based on voluntary sound reductions. IQOE will consider 2020 the Year of the Quiet Ocean and is focusing project resources to encourage study of changes in sound levels and effects on organisms that occurred in 2020, based on observations from hundreds of hydrophones deployed by the worldwide ocean acoustics community in 2019-2021.”

With IQOE encouragement, the number of civilian hydrophones operating in North America, Europe and elsewhere for research and operational purposes has increased dramatically. With these, IQOE and the ocean sound research community can shed needed light on humans’ influences on marine life and ecosystems.

The existing hydrophone network covers shallow coastal and shelf areas most influenced by local changes in human activity. It also includes deep stations that can measure the effects of low-frequency sound sources over large open-ocean areas.

Of the 231 non-military hydrophones identified in the period up to February 2021, several have agreed to their geographic co-ordinates and other metadata being shown on the IQOE website (www.iqoe.org/systems), with organisers hoping to attract many more contributors.

Of  the hydrophones identified, most are in US and Canadian waters, with increasing numbers elsewhere, particularly in Europe. Meanwhile, more acoustic instrumentation and measurements are clearly needed across the southern hemisphere.

The researchers are working to create a global data repository with contributors using standardised methods, tools and depths to measure and document ocean soundscapes and effects on the distribution and behaviour of vocalising animals.

As part of the effort to create a global time-series, new software under development by a team of researchers across the US and led by the University of New Hampshire, Manta, will soon help to standardise ocean sound recording data from collaborators,

facilitating its comparability, pooling and visualisation.

In addidtion, an Open Portal to Underwater Sound (Opus) is being tested at Alfred Wegener Institute in Bremerhaven, Germany, to promote the use of acoustic data collected worldwide, providing easy access to Manta-processed data.

Scientists over the past decade have developed powerful methods to estimate the distribution and abundance of vocalising animals using passive acoustic monitoring.

“Integrating data on animal behaviour on soundscapes can reveal long-term effects of changes in ocean sound,” says Jennifer Miksis-Olds, director of the Center for Acoustics Research and Education, University of New Hampshire.

“To observe a return to normal conditions as the pandemic subsides, the intensive acoustic monitoring by many existing hydrophones must continue at least through 2021,” says IQOE project manager Edward R Urban Jr of the Scientific Committee on Oceanic Research.

Comparable unintended opportunities for maritime study are rare and important in modern history. They include the start (1945) and stop (1980) of above-ground nuclear testing, which created traces of carbon and tritium, the movements and decay of which have provided major insights into ocean physics, chemistry, and biology.

Likewise, the terrorist attacks in New York City and Arlington, Virginia, on 11 September 2001 caused the cancellation of hundreds of civilian airline flights, allowing scientists to study the effects of jet contrails (or their absence) on weather patterns.

Those attacks also led to a shipping slowdown and ocean noise reduction, prompting biologists to study stress hormone levels in endangered North Atlantic right whales in the Bay of Fundy. With their 2001 data, research revealed higher September stress hormone levels over the next four years as the whales prepared to migrate to warmer southern waters where they calve, suggesting that the industrialised ocean causes chronic stress in animals.

Seldom has there been such a chance to collect quiet ocean data in the Anthropocene seas. Covid-19 drastically decreased shipping, tourism and recreation, fishing and aquaculture, energy exploration and extraction, naval and coast guard exercises, offshore construction, and port and channel dredging.

Data graphed by JP Morgan reveals the impact of Covid-19 on several categories of commercial activity. If true also of maritime activity, this suggests a relatively short-lived quiet ocean from late March to mid-May 2020.

Says Ausubel: “Let’s learn from the Covid pause to help achieve safer operations for shipping industries, offshore energy operators, navies, and other users of the ocean.

“We are on the way to timely, reliable, easily understood maps of ocean soundscapes, including the exceptional period of April 2020 when the Covid virus gave marine animals a brief break from human clatter.” DM168