Act 1: Nathi Mthethwa and the creatives

Act 1: Nathi Mthethwa and the creatives 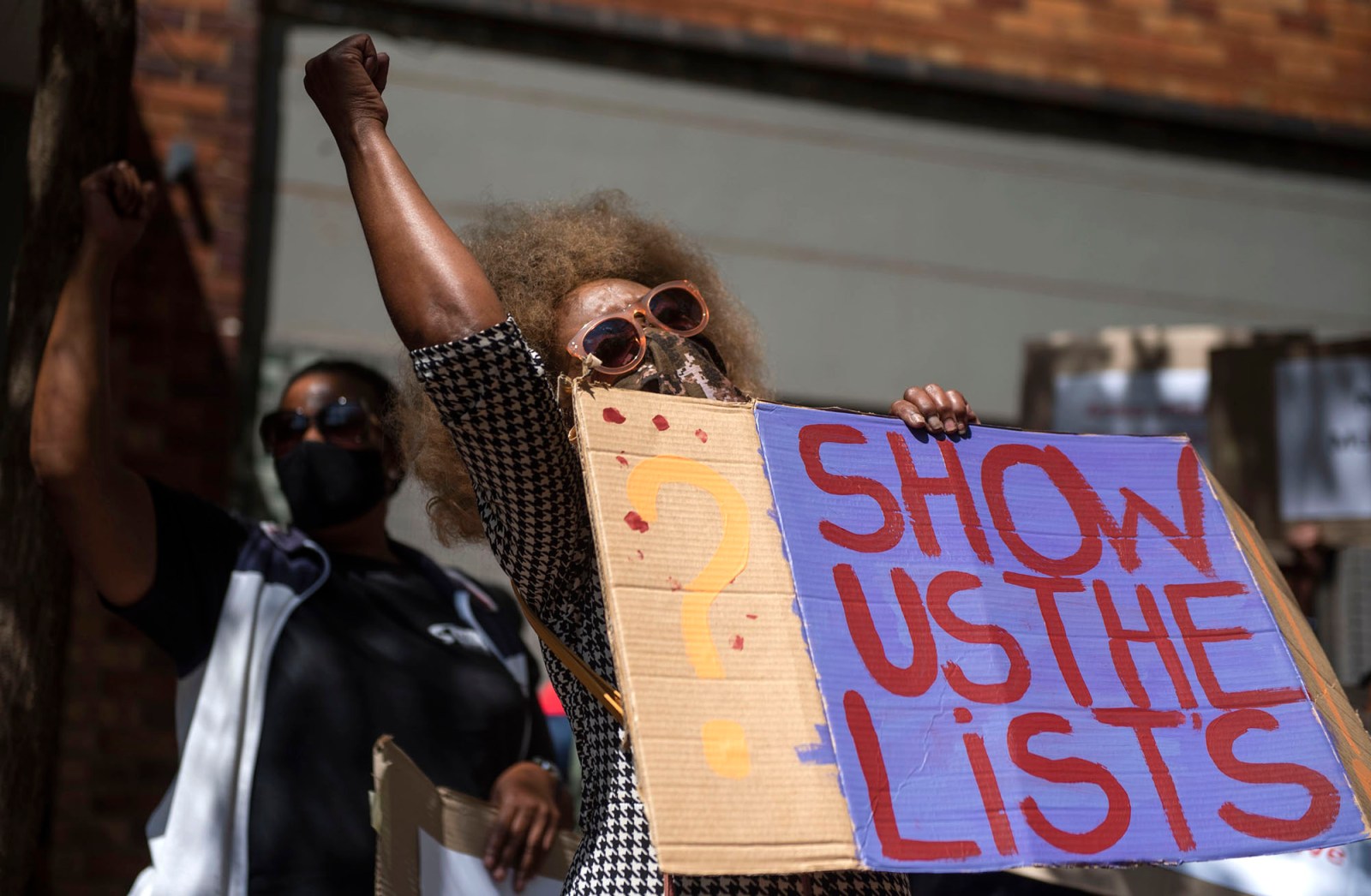 Mercy Pakela in front of the National Arts Council (NAC) in Newtown, March 15, 2021. She and several other artists have been participating in a sit-in at the NAC.  They are demanding answers to questions on funding irregularities connected to the Presidential Economic Stimulus Package (PESP), which was meant to rescue a sector blighted by Covid-19. (Photo by Alet Pretorius)

In which the minister of arts – and eight bodyguards – stages an intervention at the National Arts Council.

It’s well over a month since artists (“creatives”) began a sit-in/sleep-in at the offices of the National Arts Council (NAC), protesting against the maladministration of the R300-million fund meant to provide Covid-19 relief. Despite promises of an investigation and so forth by Minister of Sport, Arts and Culture Nathi “Tequila” Mthethwa, the protesters are still calling for his resignation – and they still want their money.

DM168 is now able to reveal that those unstoppable creatives have evolved a script, based on the long-awaited meeting between the protesters and the minister, and workshopped it in an effort to develop a multi-media presentation that would tell this compelling story. Here is that workshopped script.

Scene: The offices of the NAC, somewhat in disarray, with sleeping bags on the floor, empty pots of soup and stew made and delivered by supporters. Make-up bags, clothes for costume changes, etc, are strewn about.

Lead songbird (in fetching traditional headdress): Nathi! Nathi! Where is our money?

Lead songbird: Where are those corrupt liars of the NAC? Where are they? When will they be accountable?

Spoken-word poet (steps forward, rattling his dreadlocks): Count! Count! Come on, count! And count it properly! Can you count to 300 million? Count, count!

Lead songbird (aside): Did he just call me a…?

Second lead songbird: No, no, he’s calling on the accountants…

Lead songbird (aside): Is that French? French is not an official South African language!

Enter Mthethwa, in a blinding flash of light, with eight bodyguards.

(He tries to high-five the nearest creative, who withdraws; the minister nearly loses his footing, but is rescued and supported by two bodyguards.)

Rapper (shouts out): Don’t try and soft-soap us! Fair words butter no cabbage!

Lead songbird: It’s you who needs the intervention, minister, with all due respect.

Chorus: We are the intervention! We are creatives! We intervene!

Mthethwa: Come on, cool people! Have a little mercy! It isn’t easy for me, you know. Let me tell you my story…

Shouts of “Shut up!” and “We don’t want to hear your story! This is our story!”

Some chaos, then the dancing begins again.

Mthethwa: Wait, wait! I’ve come all the way from Pretoria to speak to you – let me be heard!

The creatives subside, allow the minister to speak. He steps forward into a spotlight shining mysteriously from above.

Mthethwa: Listen, listen – things are not as they used to be. No, no, not at all!

Chorus: Not at all!

Mthethwa: It’s not like the days when Msholozi was in charge. No, it’s quite different! Let me tell you …

More shouts of “Shut up!” and “Damn right it’s different!” Mthethwa’s bodyguards take a step forward, finger their guns. The shouters are shushed by other creatives.

Lead songbird (stepping forward dramatically): Quiet, my fellow creatives! Yes, this is our story, but the minister has a part to play. We want to hear his voice! Let no one be silenced! It’s his monologue!

The spotlight on Mthethwa brightens, while also changing colour, warming up a bit. He is bathed in a yellow glow.

Mthethwa (in a heartfelt, tragic tone, beads of sweat on his forehead): My fellow South Africans, you don’t understand … you don’t know how it is for me! It’s not like the days of Msholozi, when he was Big Chief, and I was minister of police! No, not at all! You see, Msholozi would tell me what to do. He’d give me orders – arrest that person, charge that one, send in the guys with the big guns, give more money to the slush fund, that kind of thing. I knew where I stood. I knew what I had to do! But now, oh no, it’s all different! I have to appoint committees, I have to find people with spotless reputations! I have to find chartered accountants to deal with these unchartered waters! And do I get any support from President Squirrel? No, none at all! No direction, no motivation … He never calls, he never says “Nathi, do this,” or “Nathi, do that…” He has left me high and dry! We used to just pay the slush fund and get a pat on the head! But now, no … President Squirrel is silent. No WhatsApps, no brown envelopes from Crime Intelligence – nothing! I feel like an actor without a script! What am I supposed to do? Improvise? I never attended the Market Theatre Workshop! I don’t know how to improvise! It’s like a bad dream – I’m on a stage, I have to perform, but I have been given no direction … What’s my motivation? Tell me! What’s my motivation?

Second lead songbird: Our motivation is money! Give us our money!

Mthethwa: Money? You say it’s about the money? Why didn’t someone tell me?

Mthethwa: But I was so busy writing a tweet for that funeral … I didn’t know!

Chorus: Give us the money and we’ll forgive you!

Lead songbird (aside): Or maybe not.

Mthethwa: Okay, okay, it’s about the money. I get it now. We’ll work it out. (Speaking to his bodyguards.) Right, our work here is done. Intervention complete.

Exit Mthethwa (on the way out, to his bodyguards): Okay, call the cops. Get them out of here. DM168