Workers given cold shoulder by CCMA and forced to pay f... 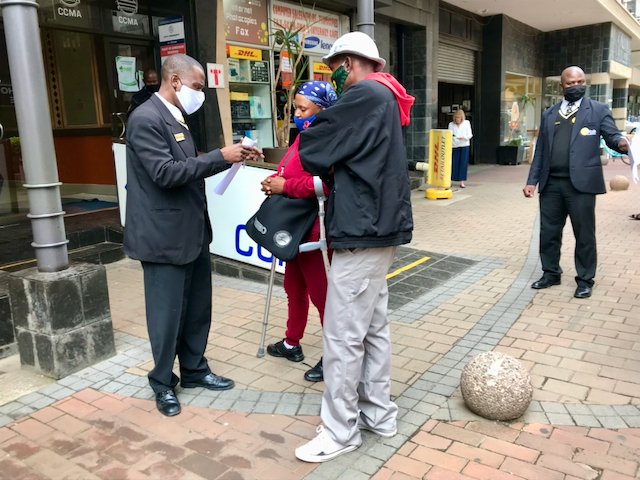 CCMA offices no longer accept walk-ins. People rely on security guards to submit their forms and give them instructions. (Photo: Masego Mafata)

CCMA in Benoni ‘has outsourced to the internet cafe next door’ according to the Open CCMA Campaign, leading to applicants’ time and money being squandered.

The Commission for Conciliation, Mediation and Arbitration (CCMA) offices in Johannesburg and Benoni have stopped allowing walk-in cases. Workers are queueing outside for hours before being directed by officials to nearby internet cafes to complete their dispute referral process online. As a result, workers are paying up to R80 at the internet cafes for a service the CCMA used to offer for free.

When GroundUp visited the office in Johannesburg on Wednesday, about 12 people were queuing outside and access to the building was limited to staff only.

Queueing workers are getting instructions on how to fill out their forms by security guards who sometimes give incorrect instructions.

Thabo Moloi, a worker queueing outside the office on Wednesday, said, “They tell us different things and we don’t know if our papers get to the officials.”

Carol Maseko told GroundUp that she was queuing for the third time. She had been waiting outside the CCMA offices for seven hours when GroundUp arrived.

“They [the security guards] just took our papers and told us to wait,” said Maseko.

She was trying to open a case of unfair dismissal but she had filled in her forms incorrectly and they were returned to her.

“The money we had spent printing and making copies went down the drain,” she said.

Nthabiseng Mabaso, also queuing, said workers can’t afford to “cough up [their] own money to make copies” of their forms, especially since the CCMA doesn’t help them fill out their documents correctly and they get sent back.

Members of the Casual Workers Advice Office (CWAO) and the Open CCMA Campaign were outside the offices in Johannesburg and Benoni for three weeks in March, assisting workers with filling out their referral forms.

Edgar Mokgola, a member of the CWAO, said, “The security guards have become officials of the CCMA. They are the ones going outside giving, taking queries, calling for cases, and so forth.”

Constance Masekwameng, a member of the Open CCMA Campaign, said that when they went to Benoni, they discovered “the CCMA has outsourced the dispute referral system to the internet cafe next door” and workers are paying up to R80 for this service.

The Open CCMA Campaign, which started in February, has demanded that the CCMA reopens fully, including walk-in facilities and having part-time commissioners hear cases.

Masekwameng also said that outside the Johannesburg offices con artists and scammers were “taking advantage of desperate workers”. These people would charge workers in need of CCMA services between R200 and R900 to help them.

GroundUp has repeatedly tried to get comment from CCMA spokesperson Amos Tshabalala for two weeks. We were told that the queries would be addressed at a media briefing on 1 April. This media briefing was postponed and follow up requests were not responded to by the time of publication. DM