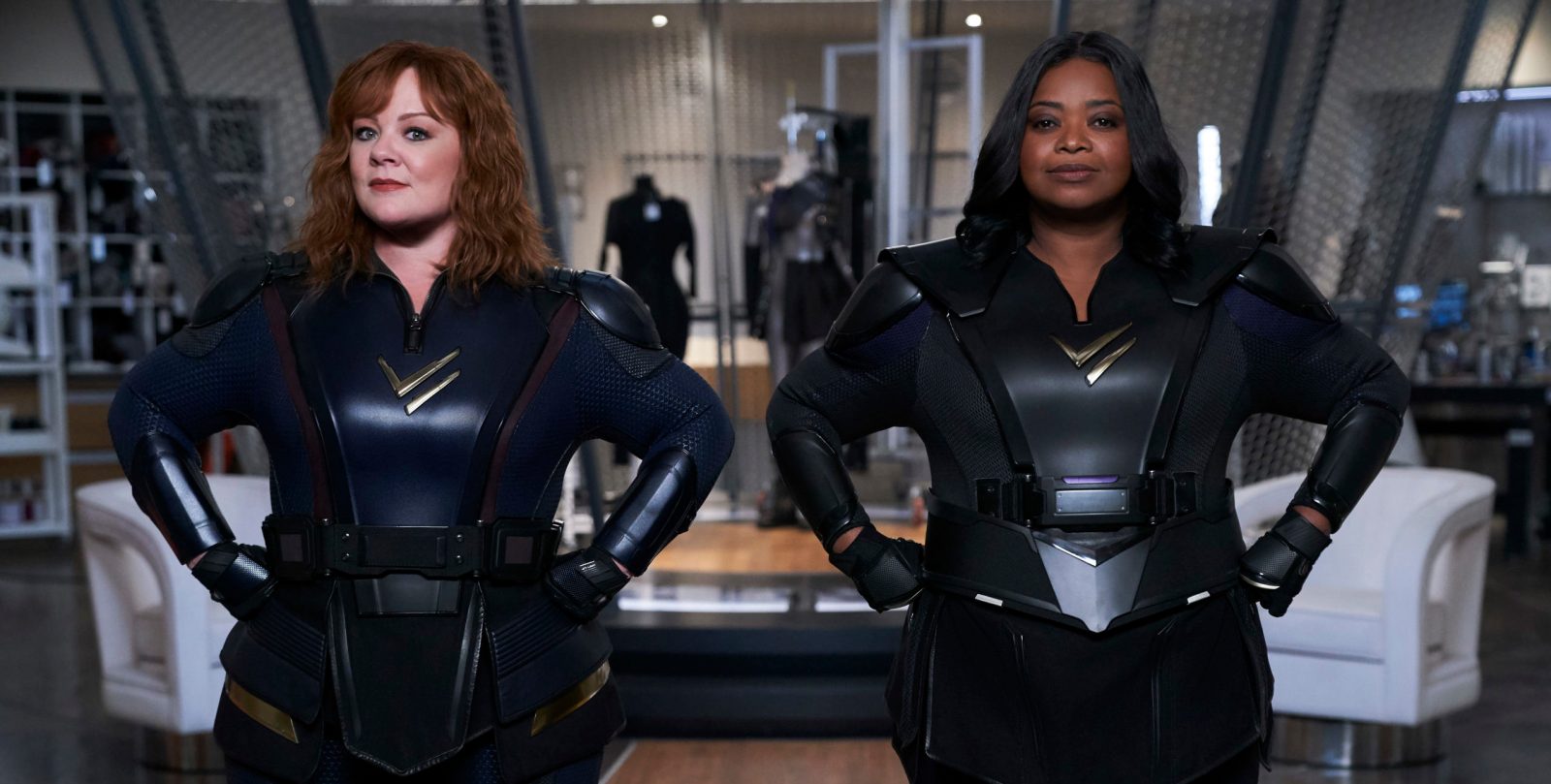 Thunder Force is a new Netflix action-comedy featuring super-powered, middle-aged crime-fighters. We spoke to actresses Melissa McCarthy and Octavia Spencer, as well as director Ben Falcone about the film.

People love the idea of superheroes. Since the first superhero comics were published in the late ’30s, we’ve concocted innumerable superhero characters with every manner of ability, and yet, whether they’re an alien hunk in spandex, a brooding billionaire in black, or a hammer-slinging Greek god, they’ve mostly been a similar kind of person. Male, white, young, sexy.

The first superheroines to arrive on the scene in the early 40s, like Sheena, Queen of the Jungle, relied on sex appeal to sell comics. Even when Wonder Woman became a global success, she was synonymous with a bondage fetish because she would manage to get herself kinkily tied-up in just about every fight. Superheroines started getting funkier and less sexist during the ’60s and ’70s in The Silver Age of Comics, which coincided with second-wave feminism, but even today, women represent a significant minority of superheroes.

The first black hero to appear in comics was in 1947: his name was Ace Harlem, an African American police detective. Despite being the first known comic to be drawn and written solely by African Americans, it was rife with racial distortion, particularly in the case of the jive-talking villains. Things slowly started improving after Black Panther (credited as the first black superhero) in the late ’60s, but once again, people of colour still represent a significant minority of superheroes.

Superheroes are potent symbols. When we grow up seeing a certain kind of person depicted as righteous, capable, beloved and special, it affects our image of ourselves. Race and gender are not the only ways that people have been excluded from the superhero club. How many middle-aged superheroes can you think of? How about plus-sized superheroes?

Thunder Force is both Falcone’s tribute to the superhero comic, as a self-proclaimed comics aficionado, and a parody of it. Like many superhero films, it begins with a far-fetched spacey origin story, in this case, told with the aid of iconic yellow comic book text boxes.

A massive pulse of interstellar cosmic rays struck the Earth and endowed rare individuals with the genetic predisposition to be sociopaths, with unimaginable superpowers – the miscreants.

Emily (played by Spencer) is a Tony Stark sort of character – a tightly wound pharmaceutical magnate specialising in genetic modification, who has synthesised a treatment to endow normal people with superpowers to fight the miscreants who are terrorising Chicago. Through an unlikely string of events involving bad luck and hilarious incompetence, her estranged childhood friend Lydia, a gutsy, hard-hat wearing, drink-chugging slacker (played by McCarthy) is accidentally injected with the only serum granting superhuman strength.

It’s a fun twist to only give superpowers to bad guys and two middle-aged women – it doesn’t make any sense, there’s no attempt at a scientific explanation, but it is fun. Thunder Force prioritises comedy over superhero action and canon even more so than irreverent self-mocking superhero films like Kick Ass and Deadpool, and the comedy is also lighter. The stakes don’t feel high – it’s funny, easy to watch and PG12.

Falcone does have a knack for naughty comedy, but he was happy to have gone in a lighter direction this time around. “When Covid hit, we sat down and tried to figure out what we could watch on TV together, and there aren’t that many things that are appropriate and interesting for people from 10 – 100.”

But don’t underestimate the comedy just because it’s not dirty. McCarthy’s dynamism as Lydia brings out fantastic comedy in her co-actors. Her genius is being able to embody both sides of awkward interactions – both the cause of the awkwardness and the one who has to suffer through it. Watching her grimace through a friend’s long-winded nonsensical metaphor about skipping stones in a lake is hilarious, watching her introduce herself by saying “You can call me Lydia … it’s my name” is equally awkward, and equally hilarious.

There’s this pathetic relatable lovability about Lydia. She’s the kind of person who’ll attempt to make her cereal taste better by thinning out the off milk with soda – the sort of idiotic idea we’ve all had when no one’s looking. The extended “assemble the team!” stage with her and Emily is like watching a super-powered toddler get manhandled by a soft-talking kindergarten teacher.

At the start of the film, she’s pretty insecure about feeling like she’s not special, but despite her lackadaisical attitude, you get the sense from her wit that there’s brilliance within her. Because she’s a working-class woman in her late 40s, even when she’s literally superhuman she gets undermined every step of the way, and that’s part of what drew McCarthy to the role.

“I always love an underdog. I love it as an audience member, I love it as an actress. I think I’m always drawn to play someone unlikely to do remarkable things. It’s also something great to put out into the world – you don’t have to be exceptional to be remarkable,” she explains.

Spencer was drawn to the film for a similar reason. “I’d always dreamed of being a superhero but they don’t cast women like me. So it was a lot of fun to break that paradigm. It was empowering.”

As much as their age and physiques are part of the comedy, because we’re not used to seeing people like them as heroes fighting crime, McCarthy makes a good point that if you’re going to trust somebody with the responsibility of superpowers, is a narcissistic, privileged young man really your best bet?

“You wanna get something done? Look at a single mom or a woman in her 40s – she gonna get stuff done! I love all different superheroes but if you really wanted to clean up the mess in the world, would you go to a 20- year-old? This 48-year-old woman has seen some stuff! I’d go to her! It’s about time we see that image out there.”

Throughout the film, we see a lot of familiar movie moments where gender roles have been reversed. There’s a classic schoolyard bully who says, “don’t think I won’t hit a girl”, so a young Lydia socks him in the nose and replies “don’t think a girl won’t hit you”. Later, when Lydia and Emily reunite as adults, Emily’s grandmother is devastated that the two of them aren’t in a lesbian relationship.

It is a mark of progress for representation in film that Falcone didn’t write these scenes to catch the audience out or prove a point.

“Having worked for so long with Melissa and having two girls, I didn’t write [my films] because I wanted to write a female movie about women who do stuff that are women’s stuff. It wasn’t a question of gender reversal, I just started from character and said, ok so Lydia kicks ass. It was not about anyone’s gender it was just about characters and what the characters called for.”

Shaking up onscreen demographics and diversifying representation to make a point is noble aspiration, but when it begins to happen naturally, that’s when change has occurred. DM/ ML

Thunder Force is available in South Africa on Netflix from April 9. You can contact This Weekend We’re Watching via [email protected]