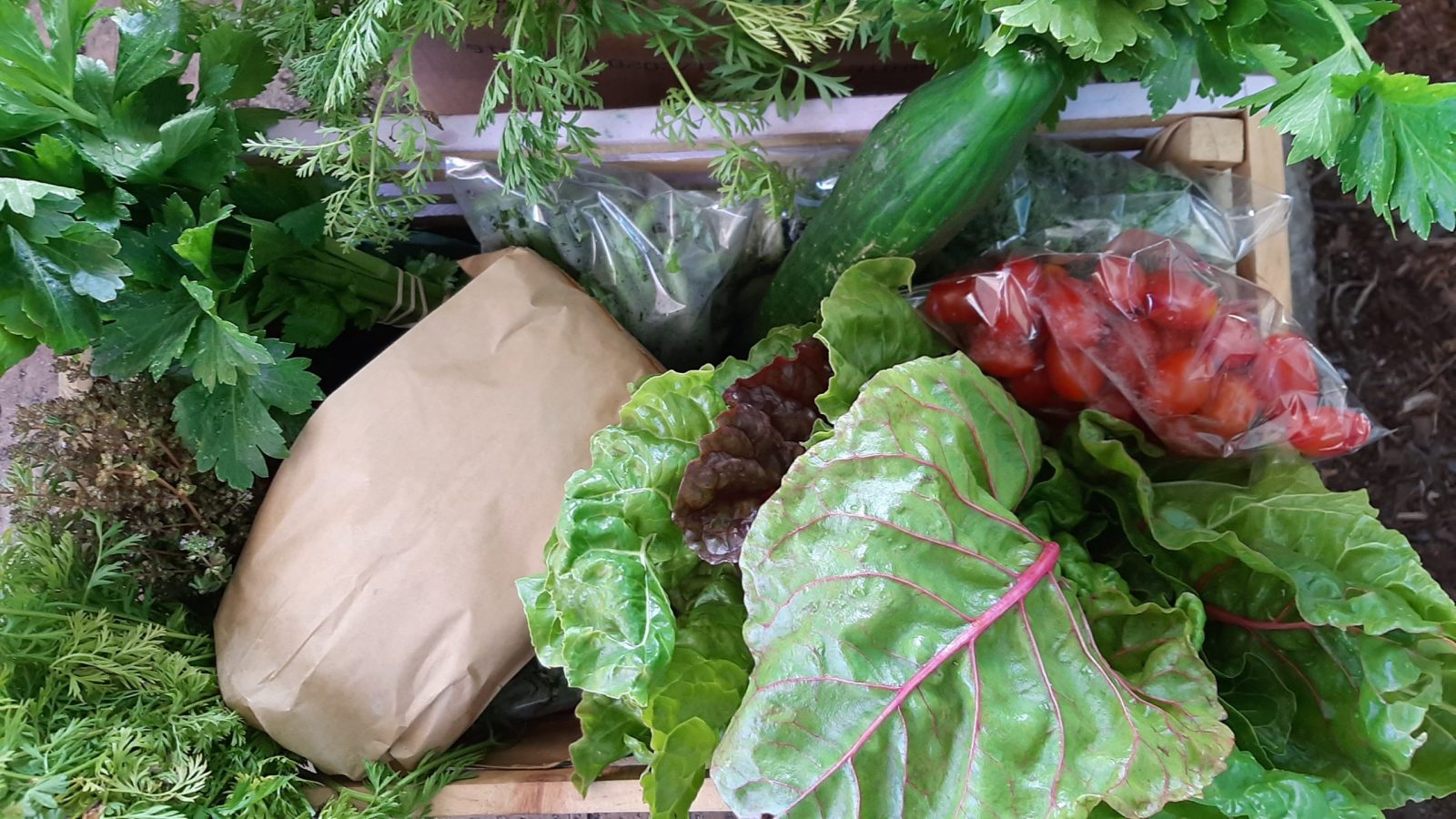 Veggie box and a loaf of bread. (Photo: Supplied)

Parusha Naidoo sets herself a challenge to spend no more than R250 a week on fresh food and finds there’s more than enough to share with friends and family.

“What do I do with all this parsley?” posted Parusha Naidoo on the Ocean View veggie box WhatsApp group, under a photo of two bunches of parsley, one wilted and the other fresh and perky. “I’ve still got the bunch from last week.”

Parusha asked her Instagram followers for ideas too and suggestions varied from tabouleh to parsley pesto. The next day she posted photos of the lunch that followed: homemade falafels (made with store cupboard tinned chickpeas) and a tomato, onion and parsley salad.

Parusha, who describes herself as a food artist, is determined to use everything in her weekly veggie box from the Ocean View Organic Farm. It’s part of a challenge she set herself to spend no more than R250 a week on fresh food.

“I want to support the five women of colour who run the farm in Ocean View,” says Parusha. Nothing from the box goes to waste and when I start following her weekly challenge on her Instagram stories it’s clear that there’s no such thing as “leftovers” in her kitchen. And every bunch of parsley gets used, wilted or not.

Parusha, who lives in Muizenberg, has been eating a plant-based diet since 2013. “I just woke up one day and stopped eating meat.” She follows a whole-food plant-based diet and veggies are the main event, not a side dish, and she knows how to make them the star.

The Minimalists and Marie Kondo have played a part in the challenge, says Parusha, who “aspires to a more minimal life”. “I realised that I have a habit of hoarding food and so I’m determined to use up everything in my kitchen cupboards as part of the challenge.

“I am well stocked up on dry goods and spices. I’m the kind of person who can’t leave a shop selling lentils without taking some home. And noodles from the Asian store. I was over-prepared at the beginning of lockdown: my food supply is not endangered.

“It’s amazing how far I can stretch my veggie box with the addition of lentils, beans or rice,” says Parusha. “Food is about community and I share my veggies with friends, making big dishes and inviting them round.”

The idea of working with a budget came from US bloggers who “post about ‘eating for $25 a week’ but in my case, it’s R250 a week”. “I love a challenge and eat a plant-based diet anyway so I decided to make it more interesting.”

The veggie box, including delivery, comes to R200. “And then I allow myself another R50 for extra things I might need to buy during the week. Garlic or, maybe a tomato,” says Parusha. “I base my meals around what’s in the box and I feel better being thrifty.

“I’m up for the challenge and get a high when I reach my goals,” she says. “It’s a hit of dopamine! Getting the veggie box makes life more interesting and I get to cook with veggies that I wouldn’t typically buy at my local supermarket.”

“So far I’ve stuck to the R250 a week limit but I’m not being strictly scientific about this challenge,” explains Parusha. “Friends will bring around rotis to go with a veggie curry I’ve made. Or I’ll go to my parents and have breakfast there so I am not eating exclusively from the box.”

I’m a transitioning vegan but I struggle to see vegetables as the main event in my meals. Parusha doesn’t have this problem and uses a beguiling blend of spices and herbs to make vegetables the stars of her dishes.

So how does it work? A typical breakfast from the box is toast, made with some of the farm bread included in the box, and topped with grilled brinjal, tomato and spring onion chutney with parsley and sriracha. Farm toast with different toppings is a popular standby and the loaf gets stretched to last a week.

Some vegetables appear more than others. “At one point there was a cabbage in the box every week and that meant I made cabbage dishes. A lot. When they stopped appearing I was slightly thrown.”

One of Parusha’s cabbage recipes is “okonomiyaki”, a Japanese savoury pancake. It elevates the cabbage to a crispy, golden fritter, an eye-opener because I still tend to think of coleslaw when I think of the sturdy leafy green.

Parusha occasionally makes pickles. “I had too many carrots and chillies from the veggie boxes and then I remembered a carrot pickle my uncle used to make. So I made a quick carrot and chilli pickle.”

Anyone who gets a veggie box will be familiar with the lucky packet nature of the contents and the confusion that can arise when unfamiliar veg appears. “One week the box had a white vegetable in it. I didn’t know what it was so asked my Instagram community and discovered it was kohlrabi,” says Parusha.

Having identified the mystery vegetable, Parusha asks for ideas and the kohlrabi becomes lunch. Sliced and served with apple slivers and dressed simply in a blend of mayonnaise, lemon, salt and pepper, on mint, on farm bread.

Familiar vegetables, like sweet potato and pumpkin, are transformed into a nourishing Vegan Peanut Stew.

1 can tomatoes or 3 fresh tomatoes

Red chilli or Scotch bonnet (according to taste)

It’s been months since I’ve cooked a meal from scratch. A freak accident left me with two broken ankles in November 2020 and I’ve been dependent on the kindness of others for, well, everything, including food for four months.

I decide to step tentatively into the kitchen to test Parusha’s peanut stew recipe, lured by the appeal of her “least effort, most reward” approach. Prep time is short and sweet and the result is delicious. It’s creamy, warming and worth the (minimal) effort.

When Parusha makes peanut stew it lasts for a couple of days, initially served with “golden pap” (maize meal cooked with turmeric and methi, or fenugreek).

On another occasion, she serves the stew with arepas (flat, round, fried corn breads) made with ingredients found in her store cupboard.

The stew even shows up on what Parusha calls “a plate of leftovers”, alongside some cabbage curry, a falafel ball and various pickles (homemade).

“I could spend less than R250 a week on fresh food,” says Parusha, “and still have enough for friends to share.” DM/TGIFood

Parusha Naidoo will be continuing her R250 a week veggie box challenge for the rest of 2021 and shares her journey on Instagram @parushanaidoo_.