Phase Two of vaccination roll-out begins on 17 May, say... 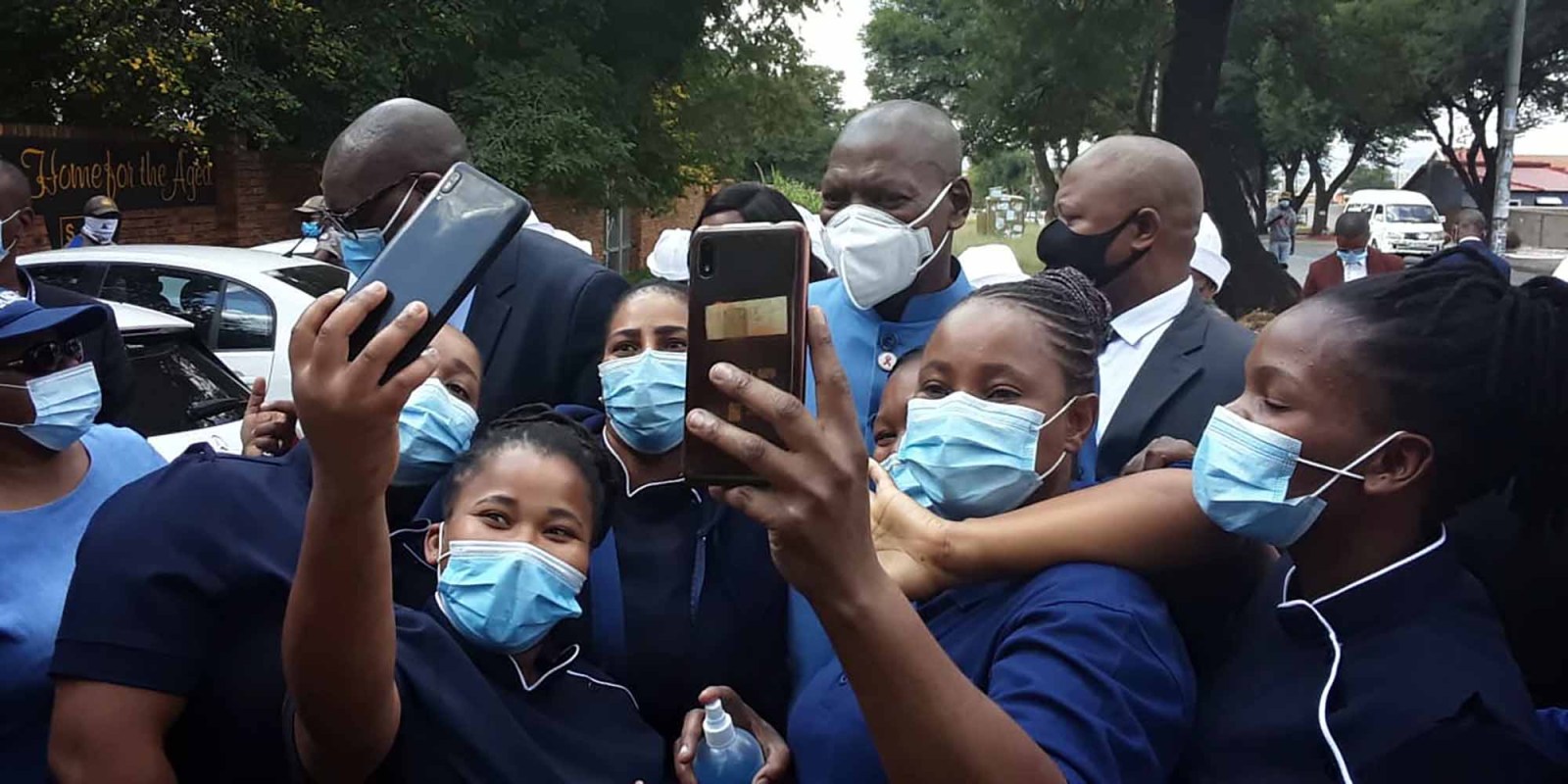 Health Minister Dr Zweli Mkhize poses for pictures with caregivers at the Soweto Home for the Aged during the minister’s visit to Gauteng vaccination facilities on Thursday, 8 April 2021. (Photo: Bheki Simelane)

Quality assurance requirements mean some vaccine delivery dates cannot be confirmed, leading to difficulties with the procurement and logistics of the vaccine programme.

On Thursday, Health Minister Dr Zweli Mkhize and Gauteng Premier David Makhura visited a number of Gauteng’s vaccination facilities to assess their state of readiness. Mkhize’s speeches were littered with numbers, but skimped on logistics.

If anything, the admission by Mkhize that the vaccine roll-out programme was not where it was supposed to be was a testament to the lack of transparency around the inoculation process.

An official at one of the facilities in Jabavu, Soweto, told Mkhize, “I am told that the elderly people were so eager. They are asking, when are we getting our vaccines? I think they are also worried with winter approaching because it’s normally about that time when we also give them their flu vaccine.”

She said the flu vaccine would not be necessary if the elderly were speedily inoculated against Covid-19.

“Actually, it will be necessary for them to also get the flu vaccine. You need to space the two,” Mkhize said.

Mkhize suggested a wait of at least two weeks between getting the flu vaccine and the Covid-19 jab. The official said this would depend on whether the Pfizer vaccine, earmarked for inoculation of the elderly in these facilities, reached them at the designated times. She said if the Pfizer vaccine arrived first, the elderly would be inoculated against Covid-19 first.

The problems around procurement and logistics of the vaccines programme are exacerbated by the fact that some delivery dates cannot be confirmed as the vaccines are subject to quality assurance.

Gauteng Premier David Makhura noted that a complication with the Pfizer double-dose vaccine was in the follow-up of patients to administer the second dose.

“You want the people to return for their second dose because if they don’t, then the efficacy becomes a problem,” said Makhura.

“We want to use what we call the congregant settings, establishments like this. Schools, we know teachers will return to school, we know law enforcement will return to work.”

The Pfizer double-dose vaccine would be used in old age homes because of the lower likelihood of high mobility by residents.

Mkhize and Makhura did not elaborate on logistics for the vaccine roll-out programme for the elderly and gave no details about additional health staff or how tendering would work.

Mkhize assured that Phase Two of the vaccination roll-out programme would begin on 17 May. So far, more than 270,000 health workers have been vaccinated. Despite admitting to delays in the inoculation programme, Mkhize expressed confidence that Phase Two would be seamless.

Mkhize added that the final tranche of 200,000 Sisonke Protocol doses from J&J would arrive early next week.

According to Mkhize, Johnson & Johnson has confirmed that it will deliver 1,099,200 doses this month. The exact date is subject to quality assurance processes, with delivery expected around 22 to 24 April.

These doses will be administered to the remaining healthcare workers and the first in line among vulnerable citizens.

The minister said these doses would be delivered from the Aspen Plant in Gqeberha (formerly Port Elizabeth), which meant a quick turnaround time for delivery.

Mkhize indicated that J&J had expressed its intention to deliver a subsequent batch of about 900,000 doses in May and June. He said the dates and exact volumes would be confirmed in the next week or two.

“We have also got a letter that indicated that some vaccines will be coming from the Covid facility,” said Mkhize.

He said South Africa’s one million AstraZeneca doses, which are less effective against the SA variant of Covid-19, had been sold to the African Union and distributed to many African countries. He said the National Treasury had confirmed that the Serum Institute of India had fully refunded SA’s payment for the remaining 500,000 doses that had not yet been delivered.

He added that engagements with AstraZeneca were continuing.

The minister began his visit at the Charlotte Maxeke Hospital in Johannesburg and wrapped it up in Soweto, where he visited two old-age homes.

At the Soweto Home for the Aged, elderly people — some in wheelchairs — came out to meet the minister and the premier, but both men left quickly after promising that residents would soon receive their jabs. DM