IFP calls for resolution to delay 2021 municipal poll while, recess or not, Parliament remains on the go 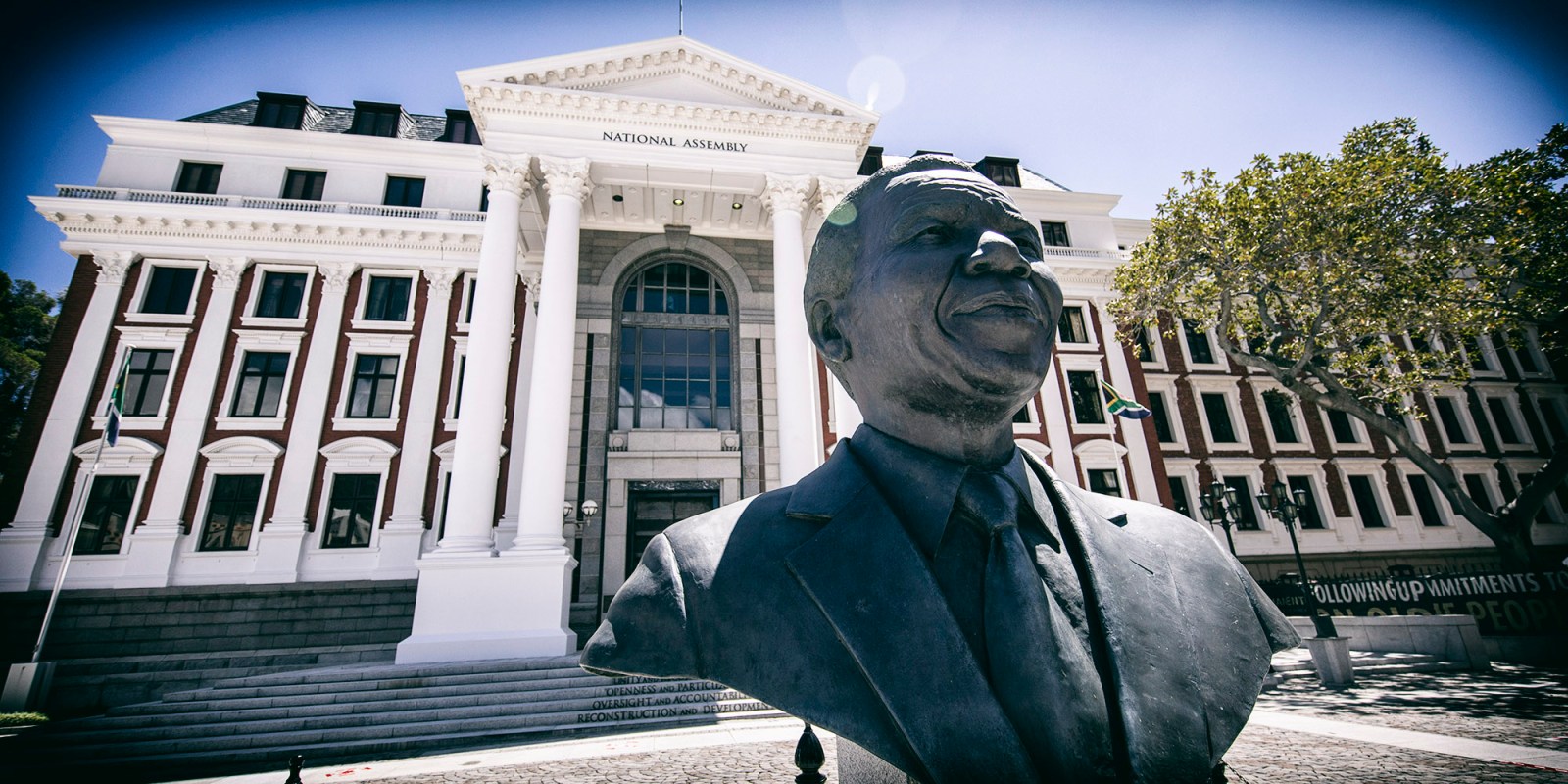 Everyone’s busy prepping for a local government election in a pandemic characterised by a lagging inoculation programme. The IFP wants Parliament to postpone the poll to May 2022 to allow for enough people to be vaccinated against Covid-19.

Parliament’s cooperative governance committee was briefed on readiness for the 2021 local government poll in Tuesday’s late-night session that ran until around 11pm. The best it got was that consultations on a municipal poll date sometime between 4 August and 1 November 2021 were underway, but not concluded.

What no one really dissected was how to hold an election in a pandemic – with the potential of 22,924 superspreader events, or one per voting district.

On Thursday the IFP joined the call for a strategic, once-off postponement of the municipal poll, citing health and safety concerns.

“Postponing until May 2022 will allow additional – safe – opportunities for campaigning, as well as for a more extensive voter registration drive,” said IFP MP and national spokesperson Mkhuleko Hlengwa.

“The shorter postponement – until May 2022 – will ensure that no amendment to the Constitution is required… rather, just a resolution (in the House), in light of the unprecedented circumstances created due to the Covid-19 pandemic.”

It’s the first call by a political party invoking Covid-19 – and the lack of a Covid-19 vaccination at scale – to delay the municipal poll. The EFF raised the issue of a possible delay in 2020, but as part of the consolidation of electing all public representatives from council to Parliament on the same one day. This, the IFP rejects. The ANC has been wavering, while the DA wants the municipal poll to go ahead as scheduled.

The role of Parliament in postponing the local government elections has been mooted before, on the basis of the “doctrine of necessity”.

Ebrahim Fakir, director of programmes at the Auwal Socio-Economic Research Institute, recently argued that given the uncertainty of whether Covid-19 vaccines would be rolled out for population immunity, and given the exceptional circumstance of the pandemic, the jurisprudentially accepted “doctrine of necessity” could be invoked to delay municipal elections by between six to eight months (2021: Local Government Elections – to be or not to be?).

“The invocation of ‘necessity’ must cogently and transparently set out the rationale, the period for the transitionary mechanism, the time limits and a plan for overcoming the state of disaster and a potential date for the elections.”

While postponing any election in a constitutional democracy isn’t a glowing option, the Covid-19 pandemic calls for prudence and practicality. And Fakir argued for “a transitionary mechanism that prolongs the current term of office, with a stipulated time limitation”.

It would be a Parliament-driven process, but one that would be made a declaratory order of the Constitutional Court to ensure supervision and nix any temptations a politician may have to make an exceptional measure permanent.

The question remains over political will: whether Parliament, its home affairs and cooperative governance committees, the ministers and everyone else, have the wherewithal to pull off what must be a tightly coordinated, swiftly executed measure.

Right now, no one seems keen to even look at such electoral options given other pressures on the electoral front. No draft bill has yet appeared before Parliament to give effect to the Constitutional Court ruling that independent candidates must be allowed to contest provincial and national elections. That law must be on the statute books before June 2022.

But talking options, Parliament is considering who to appoint as its next secretary, or its top official, after some four years of an acting incumbent. Interviews were held over two days in mid-March, and it’s now in the phase of nailing down the admin before an announcement is made. Or, as Parliament spokesperson Moloto Mothapo said in a text, “The interview phase is completed, but the appointment process is not concluded. Once a decision is made on recommendations, it’ll be tabled for decisions by the Houses.”

Meanwhile, the lawyer for the acting secretary to Parliament, Baby Tyawa, has fired off letters of demand over alleged defamation.

One went to the National Education, Health and Allied Workers’ Union (Nehawu). This, after its Parliament branch on 21 March issued a media statement calling on the presiding officers to “urgently place on precautionary suspension the Acting Secretary to Parliament, Ms Baby Tyawa, and institute an urgent investigation into her conduct.

“This follows today’s disturbing article by the Sunday Times about her refusal to comply with the rental requirements of the Department of Public Works.”

The other letter has gone to the newspaper (Top parliament official ‘owes R78,000’ in rent after giving herself a discount).

Nehawu Parliament branch chairperson Sthembiso Tembe said the union had also directly written to the presiding officers, and confirmed receiving a  letter of demand. “It’s nonsense. We are not doing anything with that. If she (Tyawa) believes she has a case, she must proceed.”

The Sunday Times said it had responded to the letter of demand and that it stood by its story.

Tyawa, contacted telephonically and by email for comment, referred matters to her lawyer. “Due to litigation concerns and legal practitioner-client privileges, we cannot comment,” said advocate Mamiki Goodman.

Parliament may be in recess and lawmakers in constituencies, but it’s still busy. In many different ways.

The ANC members on the public spending watchdog, the Standing Committee on Public Accounts (Scopa), on Wednesday led the motivation to hold in abeyance for 90 days the committee’s inquiry into allegations of racism by Eskom CEO André de Ruyter. That’s to give the power utility space to complete its probe called a few days after MPs decided on 3 March to investigate the allegations made in a letter from suspended Eskom procurement boss, Solly Tshitangano (Scopa to investigate claims of nepotism and irregularity against Eskom CEO – made by suspended procurement chief).

Word on the parliamentary grapevine is that Scopa’s ANC MPs got their marching orders from ANC chief whip Pemmy Majodina and public enterprises minister Pravin Gordhan. But then Gordhan also wrote to Scopa requesting Eskom be allowed to first conclude its probe headed by an independent chairperson.

Elsewhere in the parliamentary precinct, the EFF labour desk is now involved in a drawn-out labour dispute involving 69 parliamentary protection services (PPS) staffers over better terms and conditions of employment, and pay increases of up to R150,000 for the so-called bouncers hired from the SAPS in early 2015. Read here.

Meanwhile, legal troubles of a different kind have landed on the DA’s doorstep. National Council of Province (NCOP) DA Eastern Cape delegate Mlindi Nhanha is out on bail on charges of attempted murder and the illegal discharge of a firearm. His next appearance in the Alice Magistrate’s Court is on 7 June.

The charges arose, according to the National Prosecuting Authority (NPA) statement of 6 April, after “an altercation with his wife… It is alleged that he assaulted her… It is claimed that Nhanha became violent towards his brother-in-law and went to his car, took his firearm, shot at him but missed”. The brother-in-law had lodged then withdrawn a case, saying their differences had been resolved.

“The NPA will, however, study the docket and make a decision whether or not to proceed with the case.”

The NPA in the Eastern Cape confirmed both charges after DA Eastern Cape chairperson Andrew Whitfield told Daily Maverick on Thursday that the only charge was the illegal discharging of a firearm.

Nhanha on Wednesday informed his party that he was going on leave for two weeks, said Whitfield. “The DA reserves the right to suspend Mr Nhanha once we receive the response from the Eastern Cape disciplinary committee, which we expect soonest.”

But for now, Nhanha is on regular leave, drawing his parliamentary salary.

Lawmakers are back from recess in early May. DM