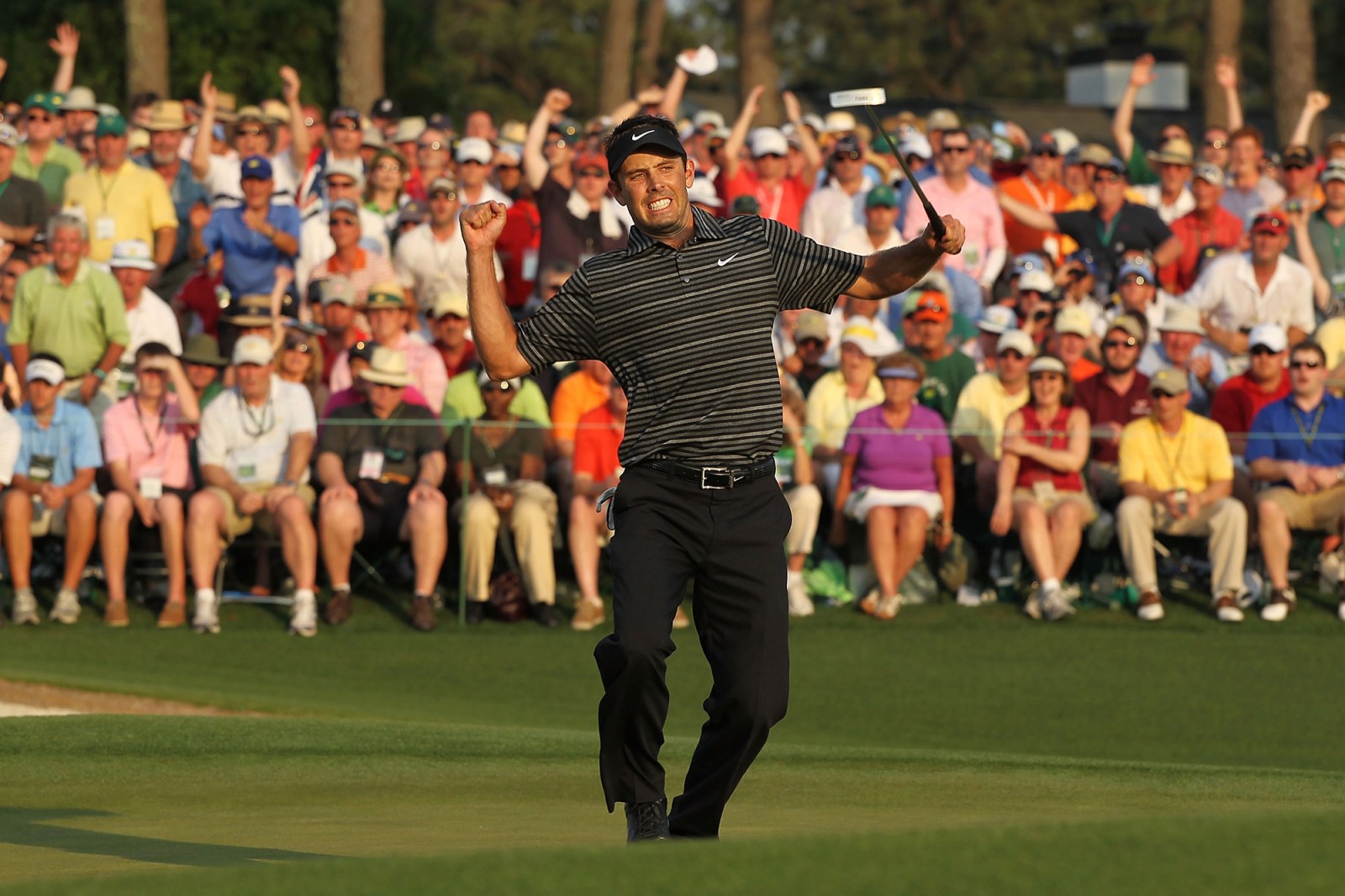 Charl Schwartzel of South Africa celebrates his two-stroke victory on the 18th green during the final round of the 2011 Masters Tournament at Augusta National Golf Club on April 10, 2011 in Augusta, Georgia. (Photo by Jamie Squire/Getty Images)

As a field of the world finest golfers’ tees up for the 2021 Masters starting at Augusta National on Thursday, it marks 10 years since South Africa’s Charl Schwartzel surged through the pack, like a thoroughbred racehorse, to win the 2011 Masters by two shots.

Four consecutive birdies on the par-five 15th, par-three 16th and par-fours at 17 and 18, in the final round on Sunday at Augusta to win the Masters had never been done before. Not until Charl Schwartzel changed 75 years of history in the slanting spring Georgia sunshine in 2011.

The then 26-year-old South African produced a remarkable sequence of holes, and particularly putts, on Augusta’s notoriously fast greens. It was an even more impressive feat of mental toughness as Schwartzel never blinked in the white heat of a Masters Sunday showdown that included a charging Tiger Woods, a flailing Rory McIlroy and nine players sharing the lead at one point or another.

Oh, and for Schwartzel (and several others) it had the added tension of trying to close out a first major championship title.

Playing in the second to last group, when his final birdie putt from 15-feet dropped, Schwartzel went into the clubhouse on 14-under after shooting a final round 66 knowing that no one could pass him.

His first major was secure as he became the third South African after Gary Player and Trevor Immelman to win the coveted green jacket. His victory also occurred exactly 50 years to the day after Player won his first Masters in 1961.

Schwartzel’s feat in those finishing holes is often overshadowed by McIlroy’s meltdown around the infamous Amen Corner. The Ulsterman triple-bogeyed the par-four 10th and double-bogeyed the par-three 12th that saw him shed a four-shot overnight lead. He ended up carding an eight-over 80 to finish 10 strokes behind Schwartzel.

But dwelling on McIlroy’s failure does Schwartzel a disservice because his sequence of birdies was unmatched. He also did it under intense pressure as Woods made a charge, carding 31 on the first nine to roar into a share of the lead by the 10th hole. Augusta’s pines were shaking with anticipation of a Tiger charge.

But like McIlroy, Woods’ challenge ended on the 12th with a bogey as he slowly faded amidst the battle of youngsters such as Schwartzel and Australia’s Jason Day.

Schwartzel started the final round four shots behind McIlroy. But a spectacular chip-in birdie on the par-four first and wedge for eagle on the third saw him briefly share the lead with McIlroy, who was barely out of the starting blocks.

Schwartzel bogeyed the fourth, parred the next 10 holes and looked to be out of the mix as the Australian duo of Adam Scott and Day moved to the top of the leaderboard on a crazy day when nine players came within a shot of the lead, including five sharing the lead at one point.

But it was Schwartzel who found something extra as he rolled in a quartet of birdie putts that will echo through time, even if many historians prefer to focus on the McIlroy collapse.

“I always thought if I win one (major), it might be this one,” Schwartzel said after the round.

One and only major

After his Augusta heroics, it seemed Schwartzel would almost certainly add more majors to his résumé considering his silky swing and obvious mental toughness, which by that stage of his career had yielded six European Tour wins prior to the 2011 Masters.

He was only 26 when he won so impressively and rose to No 11 in the world golf rankings. Everything seemed to be primed for a decade or so of some big wins but it hasn’t quite worked out that way.

Back and wrist injuries have impacted his consistency although he has added another seven international wins, including the 2016 Valspar Championship on the PGA Tour, to his catalogue of victories.

At 36 Schwartzel should still be a contender at tournaments, but the last decade has seen the rise of brilliant golfing talents, including McIlroy, who has subsequently won four majors after his Masters collapse.

Others such as Jordan Spieth, Bryson DeChambeau, Brooks Koepka, Justin Thomas and defending Masters champion and world No 1 Dustin Johnson have made winning much harder.

As a former Masters winner, Schwartzel has a lifetime entry to the tournament, which at least gives him another shot at unlikely glory. His world ranking has dipped to 211, but his game at Augusta is always solid.

In last year’s November Masters (delayed due to Covid-19) Schwartzel finished in a tie for 25th and in 2017 he was third. He has also missed four cuts in the nine appearances since his 2011 triumph.

DeChambeau keeps talking a good game while Spieth back in hunt

While a Schwartzel victory in 2021 would be considered a major shock, victory for 2020 US Open winner DeChambeau or 2015 Masters champion Jordan Spieth would not be such a surprise.

Spieth won last week’s Texas Open on the PGA Tour and has vaulted back into major championship conversation after a season of strong displays. The win in Texas ended a four-year title drought for Spieth, which was perfect timing as he enters a tournament and course where he has performed well.

Besides winning in 2015, Spieth was second in 2014 and 2016 and third in 2018. It’s fair to say with his history at Augusta, and his current form, Spieth starts as a serious title contender.

“I feel like there’s quite a few things that I still need to really improve on and I felt that over the weekend,” Spieth told the media at Augusta on Monday.

DeChambeau, who, before the 2020 Masters boldly claimed that given his power and length that Augusta was a “par 67” for him before being humbled as he finished 18 shots behind Dustin Johnson, has not toned down the rhetoric.

“I was wrong to say Augusta is a par 67 for me. It’s a 68,” The Telegraph quoted DeChambeau as saying. It’s no wonder he divides opinion.

DeChambeau’s 2020 remarks ruffled feathers among Augusta’s hierarchy and as a result, the greens are even faster than usual. The grim Augusta committee hasn’t openly admitted it, but they don’t want 20-under winning their tournament again.

Still, DeChambeau remains bullish that his power game remains the answer to winning, but he does combine it with a brilliant short game as well as a strong work ethic.

“I don’t know the extent of my talent. I know that I’m very dedicated and whatever I set my mind to, I’m going to do,” he told the media at his pre-tournament press briefing.

“And I think that over the course of time, if you work hard enough, and you’re dedicated enough at something, it’s going to look like extreme talent.

“It can be a co-variable of it, and I think that when I was younger, my dad always would tell me to try and hit weird wedge shots or weird iron shots around trees, make weird golf swings so that I could adapt on the spot.

“That’s where, from a young age, I grew up being able to solve these problems, albeit hitting a golf ball in really unique, weird ways. So, as I go to speed training and as I go to swinging it really hard, I’m still able to draw back on those memories of when I was younger, hitting a weird shot or hitting a weird motion or chipping a shot, or whatever it was.

“I became very good at adapting to the situation, and that was mainly a result of my dad teaching me it’s okay to fail and it’s okay to try things and mess up because it makes you more resilient.”

Johnson has rolled into Augusta a little under the radar after a mediocre season by his high standards. He has not won on the PGA Tour this year but arrived confident that he could become only the fourth man after Tiger Woods, Jack Nicklaus and Nick Faldo to win back-to-back Masters’ titles.

“It’s a tough tournament to win. You’ve got to — like I said, you’re going to have to put four good rounds together, especially with the conditions,” Johnson said.

The mindset coming into the week doesn’t change at all. It’s another tournament. I won the Masters; it was five months ago.

“Coming into this week, it’s a new year. It’s a new tournament. So, the mindset is still the same. I’m ready for the event, but just going out and getting ready for the tournament, seeing how the course is playing, working on the shots that I need to work on, and so that’s kind of the mindset. So, it’s not going to change.

“You’ve got to do everything well. And with it firm and fast, it’s just a really hard golf course because obviously any hole at any time can jump out and get you. So, you know, it’s just very tough to win once, and especially multiple times.”