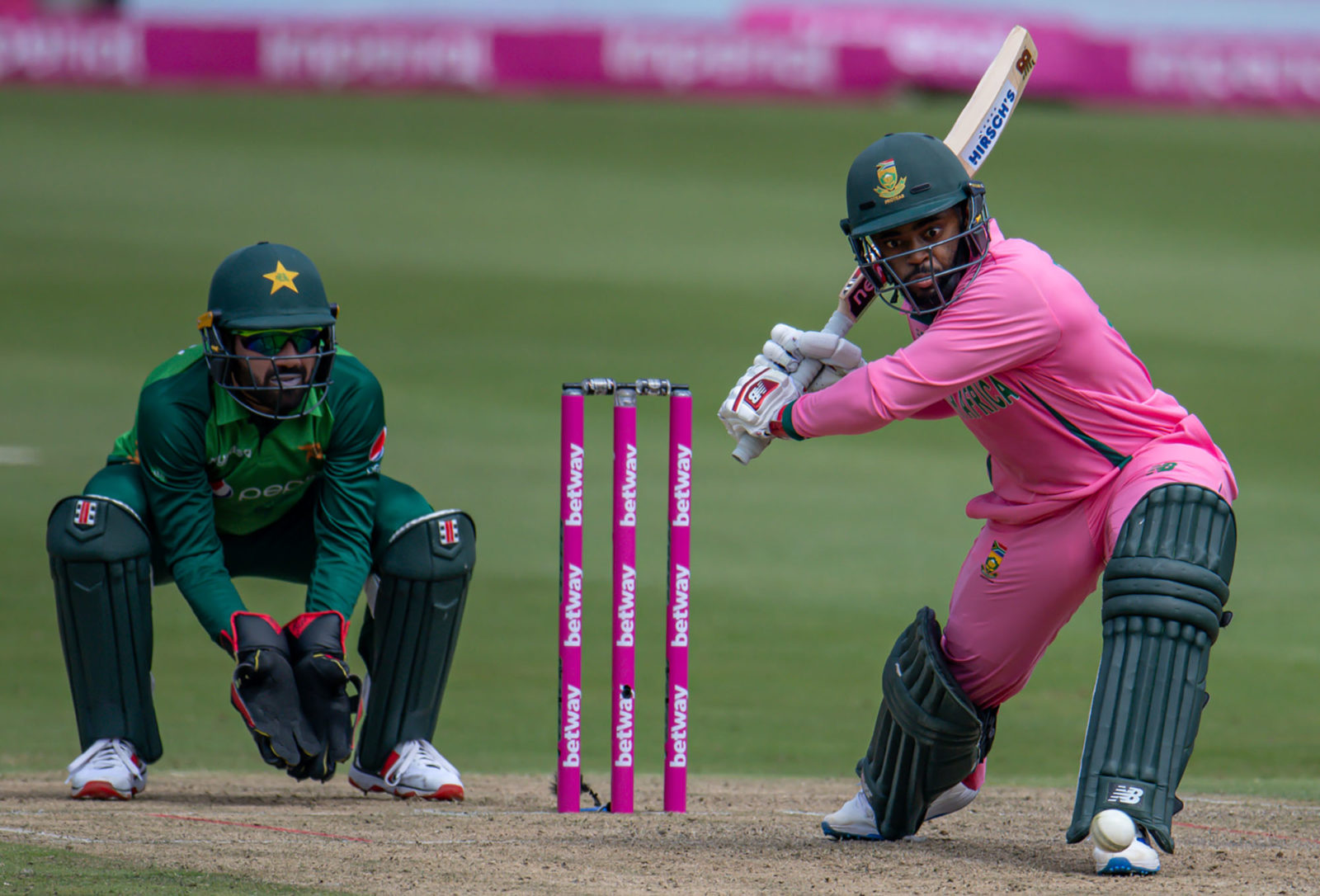 Temba Bavuma of South Africa about to strike the ball during the 2nd Betway ODI (CWCSL) match between South Africa and Pakistan at Imperial Wanderers Stadium on 4 April 2021 in Johannesburg. (Photo: Gordon Arons / Gallo Images)

A depleted Proteas were unsurprisingly beaten by 28 runs in the deciding One-Day International against Pakistan at SuperSport Park on Wednesday, to give the tourists a 2-1 series win.

What happens when five leading South African players are freed up to play in the lucrative Indian Premier League (IPL) instead of for their country in a deciding rubber, and another is injured? Well, inevitably, losing is the result.

Taking six first-choice players out of any squad would diminish chances of victory, especially if the opposition is as accomplished and polished as Pakistan.

With Covid-19 forcing reschedules and ensuring this three-match One-Day International (ODI) series was played in the IPL window, something had to give. And that something was the Proteas’ realistic chance of a series win.

Chasing 321 for victory, the Proteas were bowled out for 292 with three balls of their innings remaining as Pakistan took a second ODI series win in South Africa, following their 2013 triumph. They became the first team from the subcontinent to win two ODI series in South Africa.

South Africa’s absent five – Quinton de Kock, Kagiso Rabada, David Miller, Lungi Ngidi and Anrich Nortje – departed for India on Monday with 371 ODI caps between them. Throw in the injured Rassie van der Dussen, who contributed 60 not out and 123 in the first two ODIs of this series, and the Proteas’ spine, spleen, lungs and most of their limbs were absent from the decider.

How they will patch themselves up for the pending four-match T20I series, which starts on Saturday, is going to be a challenge for coach Mark Boucher. Van der Dussen is unlikely to feature until the fourth T20I, while skipper Temba Bavuma pulled a hamstring attempting a quick run on Wednesday, and is also in doubt.

“Rassie has between a Grade One and a Grade Two quad strain, which means he is probably out for 10 days from [Tuesday],” Boucher said.

“I’d be stupid to try and push him to play in these T20Is. He’s still staying with the squad and hoping that he will have a quick turnaround, but it doesn’t look likely that he’s going to be able to get on the park.

“Temba’s quite a tough guy, so when you see him hobbling around…. And it only got worse in the change room. I think he might have done something fairly bad. He seems to be in quite a bit of pain. But these are the cards we’ve been dealt. We’re going to have to find a way.”

Encounter reduced to a mismatch

In all, South Africa made seven changes between the second and third ODI, with spinner Tabraiz Shamsi omitted for the third and Keshav Maharaj coming in.

Pakistan made four changes, but three were tactical as they weighed up the conditions and their own needs and then chose a team to suit their approach.

With the series delicately poised at 1-1 after two thrilling ODIs in the past week, the final encounter was reduced to a mismatch as Boucher’s inexperienced 11 tried to go toe-to-toe with a steadily improving and stable Pakistan in the decider.

Falling 28 runs short, after asking Pakistan to bat was no disgrace, although there will be some regrets as South Africa were in the contest for large parts. It was the Proteas’ final few overs with the ball that proved the difference.

Pakistan scored 50 runs off the final 14 balls of their innings thanks to Hasan and Babar launching a blitz, which ultimately won the game. Had the Proteas conceded only half those runs, the chase would have felt in reach, instead of tantalisingly close, but just over the horizon.

Boucher and Bavuma came up with a team that had potential but went into the match trying to stay in the contest and hoping for some luck, rather than the sheer belief they could win.

The difference was the Proteas falling short at key moments and the brilliance of Fakhar and Babar with the bat and Shaheen and Rauf with the ball. Fakhar scored 101 to add to his 193 at the Wanderers in a losing cause on Sunday while Babar weighed in with 94.

After winning the toss and asking Pakistan to bat, the Proteas controlled the innings well enough, thanks to an inspired decision to open the bowling with Aiden Markram’s slow left-arm. He was accurate and tight initially and kept the visitors hovering around the five-an-over mark, which in modern ODI cricket, especially on the Highveld, is a moral victory.

But lack of early wickets allowed Pakistan to build the tempo slowly and even though they lost a flurry of wickets in the middle overs, Fakhar had done his job and laid the groundwork for Hasan (32 not out off 11 balls) to apply the icing.

South Africa’s run chase was never quite on par. Opener Janneman Malan made a classy 70, but the rest of the top four made starts but failed to kick on. Markram went for 18, Bavuma for 20 and JJ Smuts for 17. It simply wasn’t good enough when chasing more than 300.

A 108-run fifth wicket stand off 100 balls between Kyle Verreynne and Andile Phehlukwayo gave a glimpse of hope. But it was snuffed out when Rauf had Verreynne caught in the deep for 62. Phehlukwayo followed soon after for 54, which ended the contest.

“We need to play at a higher intensity. We need to be more desperate in the field especially,” Boucher said afterwards. “One or two of our senior players need to start winning games for us.

“I know they’re trying really hard, but senior players need to stand up in tough conditions and pressured moments. That hasn’t been happening as often as we want it to happen.”

Had the IPL five played, it could have been different, but it’s a moot point. Those five played in the first ODI, which the Proteas lost and again in the second, which they won.

The challenge for Boucher, Bavuma and Co, is to build depth so that they can cover those shortfalls in future, because the tussle between international duty and lucrative T20 contracts in global leagues is only going to become more competitive. DM