Consumer spending is recovering — but what will it look like post-Covid? 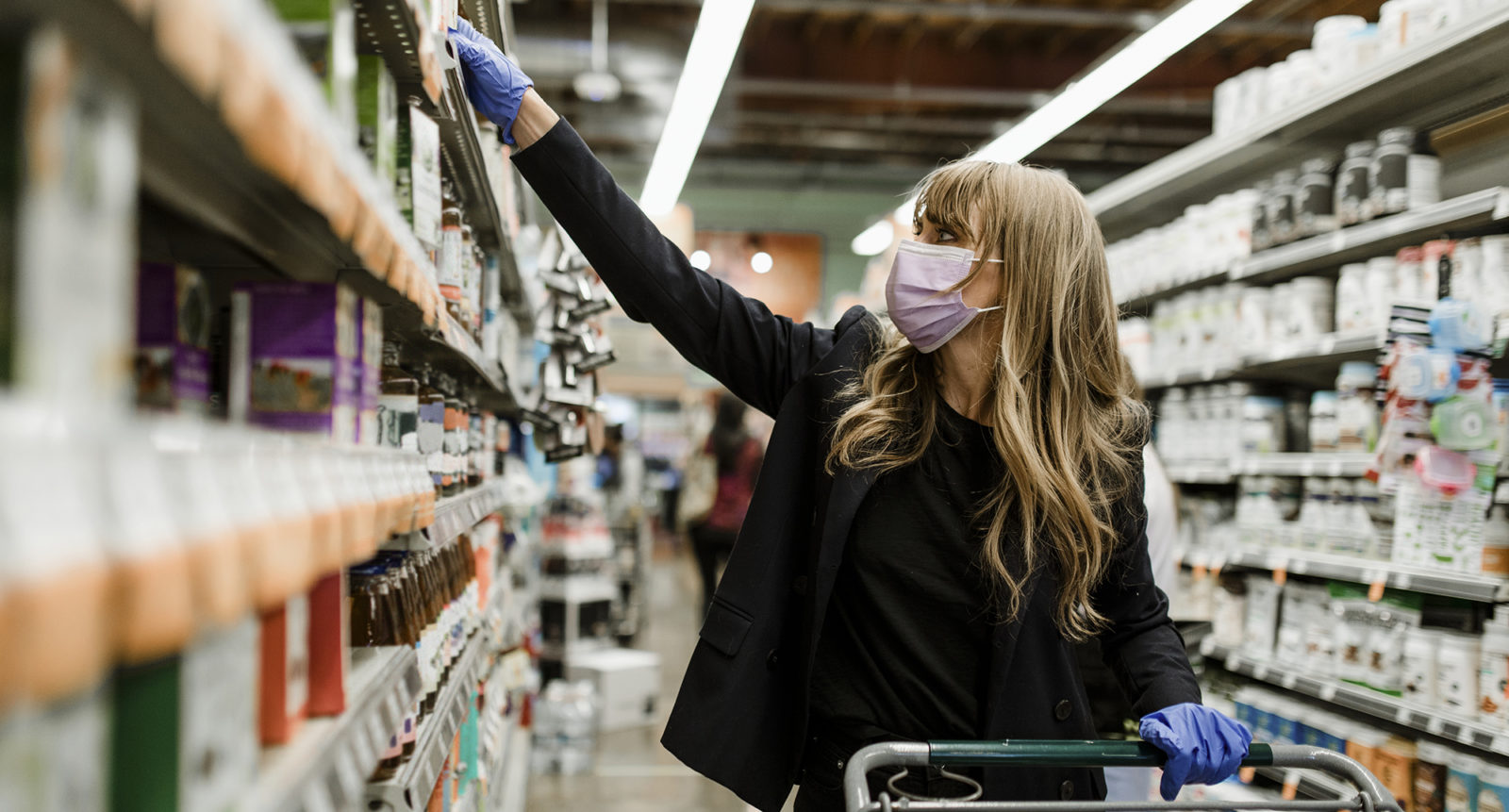 As the world sits on the cusp of what is hopefully going to be a global rebirth, it’s not surprising that opinions are so divided on how much and how consumer spending is likely to unfold during the years ahead. (Photo: Rawpixel)

Economic views are divided on how much and how consumer spending will change as we emerge from the Covid-19 pandemic. What isn’t up for debate is that some spending patterns will revert to pre-pandemic trends, but others will be forever different.

Much of the nature and extent of the global economic recovery will ride on whether the much-anticipated pent-up demand is released into the economy through consumer spending and also what the nature of that spending will be.

Just like divergent economic growth experiences across the world, different consumer segments are also likely to follow distinctive growth trajectories — some of which are already proving surprising.

Economists continue to have mixed views on how vigorous the upswing in spending will be, with the debate of the year being whether this will bring back inflation or not. Some say there is a wall of money waiting in the form of pent-up demand. But others predict that much of the spending has already taken place in the US and that the boost from fiscal incentives will be short-lived. Others highlight that it will very much depend on how consumer behaviour changes compared with the pre-Covid spending patterns.

So what are current statistics telling us about consumer demand and emerging spending patterns? The US and China are undoubtedly out of the starting blocks with respect to spending, while Europe and South Africa are trailing behind. However, South Africa could well pip Europe to the post because of its better Covid-19 position currently and a higher than expected increase in latest vehicle sales — considered a good leading indicator of consumer spending.

UBS CIO Paul Donovan has a colourful way of describing the differences in consumer spending in the US versus Europe. Regarding the US, he says: “As restrictions ease, spending on restaurants and other personal services are increasing. People are switching spending to having fun (fun means something that you can post about on Instagram).”

He doesn’t believe this poses much of an inflation risk because, “for the most part, there is the supply capacity to meet this increased service sector demand”.

However, in Europe spending on fun activities is still delayed by rising Covid-19 infections and mobility restrictions, he says.

Although the more vibrant picture Donovan paints of the US could ultimately prove the inflation-mongers right, former Morgan Stanley chief economist Stephen Roach also doesn’t expect a strong rebound in consumer spending to the extent that it revives 1970s-style inflation.

In a recent article, Roach says: “Recent trends in US consumer spending suggest that the natural forces of pent-up demand may largely be spent. Over the final eight months of 2020, the post-lockdown rebound of durables consumption was fully 39% greater than what was lost during the lockdown in March and April. As a result, durables consumption rose to 8.25% of GDP in the second half of 2020 — the highest share since early 2007 and well in excess of the 7.1% average over the 2008-19 period.”

He says the expenditure momentum could continue, with the latest round of government relief checks giving further impetus to spending on consumer durables. However, Roach expects this pent-up demand to soon be exhausted.

In South Africa, initial signs of an economy-wide spending increase are muted, even though some statistics are moving in the right direction, with consumer confidence improving slightly in February. Spending on durables in 2020 is still 8.5% lower than the previous year. However, the level of durable expenditure in the last quarter of last year, measured at constant prices, seasonally adjusted and annualised, was close to its quarter one 2020 level, having erased the lockdown-induced declines in spending. Semi-durables expenditure hadn’t quite caught up to its first quarter 2020 level by the fourth quarter and is still 13.7% lower compared with a 5.4% decline in total expenditure.

Domestic expenditure is not likely to experience the same savings tailwinds as in the US, with South African household savings at 2% of GDP in 2020 — up on the previous year’s 1.2% but still a fraction of the 20% of GDP savings ratio in the US in January this year.

Opinions of what type of spending is likely to prevail as the world economy begins to leave the pandemic behind also differ. Roach doesn’t believe that consumers will stop buying furniture and cars in favour of spending on entertainment “and other pre-Covid-19 activities” because of the fear the virus has invoked.

McKinsey Global Institute also expects the pandemic to leave lasting marks, but its research finds that spending on things like live entertainment will revert to pre-pandemic patterns.

To identify where the changes in behaviour and nature of consumer spending could be, it did some interesting analysis in a publication titled The consumer demand recovery and lasting effects of COVID-19.

McKinsey then developed a “stickiness test”, which “identifies factors that determine whether a behavior will persist”. The time period is from 2020 to 2024 and the sample comprised the major economies.

The graphic below illustrates its findings, which include that e-grocery shopping, virtual healthcare visits, and home nesting are likely to stick. In contrast, remote learning, declining leisure air travel, and decreasing live entertainment are, it says, “likely to revert closer to pre-pandemic patterns”. 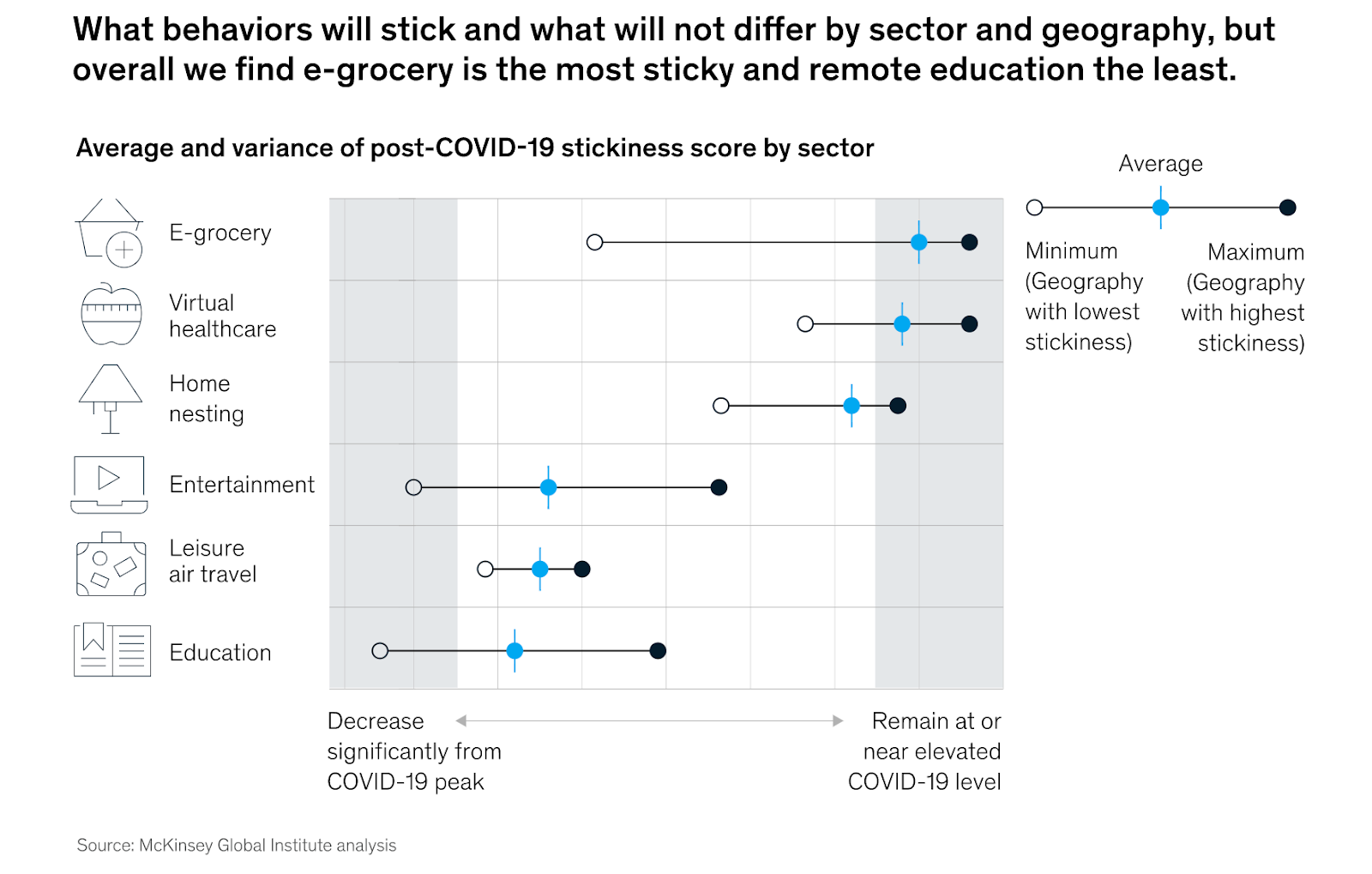 McKinsey expects home nesting to stick because high-income households are likely to continue to work from home “to some degree” and low-income households will opt to entertain at home because of the lower costs of doing so.

“At the same time, we expect many other behaviours that the pandemic interrupted — leisure air travel, in-person education, and in-person dining — to resume with the recovery, although potentially with modifications from the experience of the pandemic.”

As the world sits on the cusp of what is hopefully going to be a global rebirth, it’s not surprising that opinions are so divided on how much and how consumer spending is likely to unfold during the years ahead. We remain in unexplored territory. Fortunately, however, even in South Africa the first seeds of consumer confidence and a spending recovery are starting to sprout. DM/BM