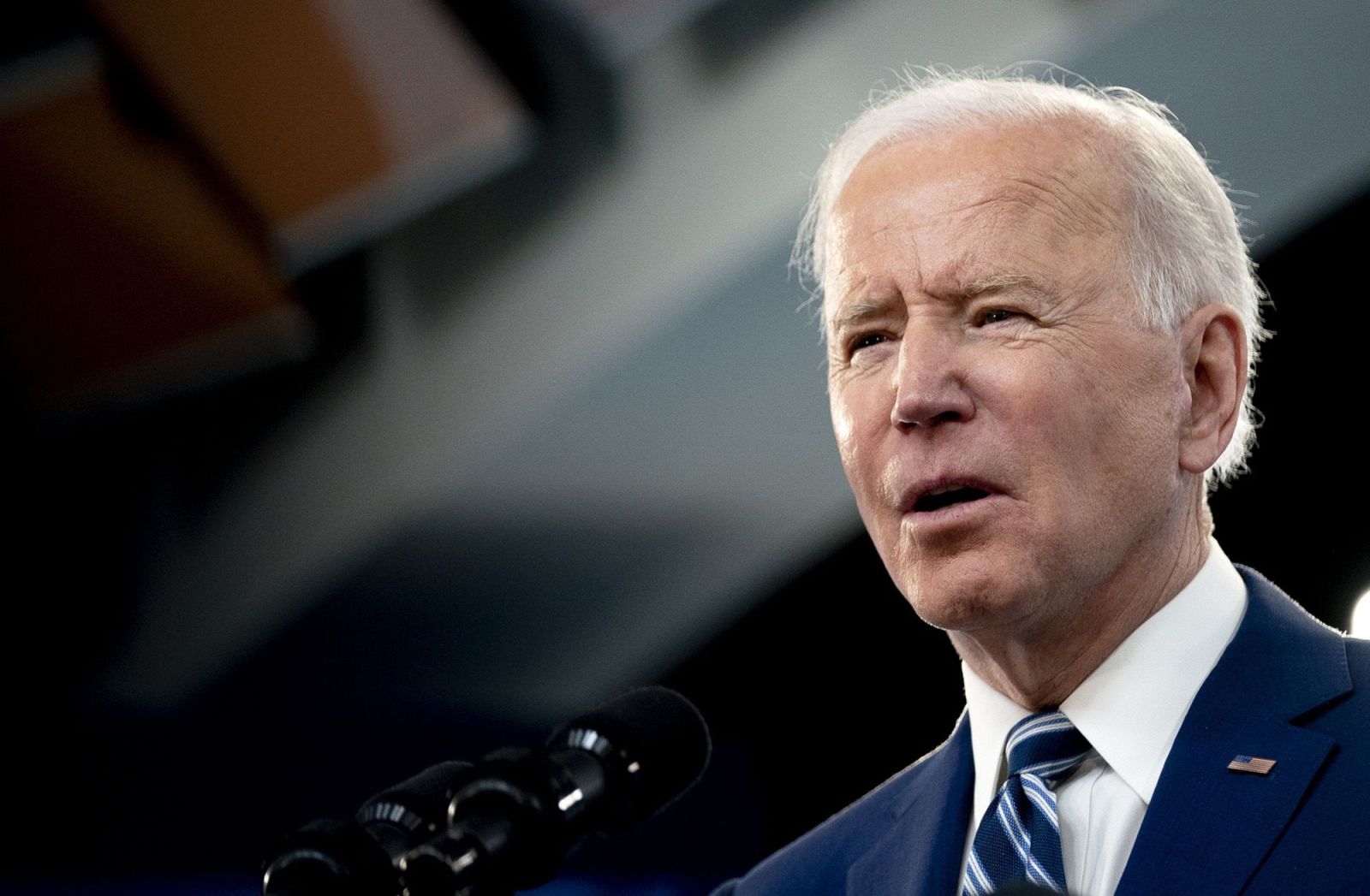 The most pernicious aspect of the Georgia law is that it puts the State Election Board under the control of the Republican legislature. Had such a measure been in place for the November election, Donald Trump might well have succeeded in his attempts to overturn the result there and in other states where the outcome was close.

Spring has sprung in Washington DC, the cherry blossoms are blooming, 10 million Americans were vaccinated in the past three days, adult human beings are in charge of the government and the worst fiend at the White House is Joe Biden’s German shepherd, Major, who keeps biting people.

Most members of Congress are back in their districts, where they are supposed to be out listening to the concerns of the American public. But the battle lines have been drawn already, the talking points prepared for when they get back. The Capitol, which already resembles a city under siege, is about to experience another round of hand-to-hand combat.

Biden, the centrist almost-octogenarian dismissed by many on the progressive left as an old fart, has unveiled a breathtaking reform agenda aimed at rebuilding the US economy, combating climate change, countering inequality and restoring American democracy to prevent it from sliding into permanent minority rule.

His $2.2-trillion American Jobs Plan includes billions for fixing the country’s crumbling bridges, roads and railways, expanding broadband, $175-billion to transition the country to electric vehicles, as well as serious money for new research and development, manufacturing and affordable housing.

The ostensible aim is to not just rebuild America’s infrastructure, but to move toward a carbon-neutral future, to arrest America’s relative decline, and to start to deal with the wealth and income inequality that has got so out of whack.

Most Americans like at least parts of the plan, but Republicans are set to oppose it vociferously, claiming that it is a laundry list of goodies ostensibly about infrastructure that masks Democratic giveaways such as home healthcare for the elderly. Even less acceptable to Republicans is the proposal to pay for it by hiking corporate taxes — at least halfway to where they were before Donald Trump’s tax cuts of 2017.

While the details are still to be hammered into legislative form — and Speaker Nancy Pelosi would like it to become law by 4 July — a major clash is emerging on a separate track: the “For the People” Act and the John Lewis Voting Rights Act that propose a massive reform to the country’s voting laws.

On top of this avalanche of voter suppression laws, redistricting will happen later in 2021. The Republicans will start the 2022 mid-term elections with the ability to write themselves 10 more safe House seats that will make them favourites to take back the House of Representatives.

They are designed to head off the current frenetic attempts in state legislatures where Republicans are introducing laws that will make it harder for black people and the poor to vote. As of 24 March, legislators have introduced 361 bills with restrictive provisions in 47 states, the most infamous being in Georgia which was signed into law by Governor Brian Kemp flanked by six white men and under an oil painting of a slave plantation.

The Georgia law has generated liberal anger, unprecedented disapproval from Georgia’s leading corporations such as Delta and Coke and a decision by Major League Baseball to cancel an all-star game in Atlanta.

The rash of voter suppression measures follows an election in which there was no proof of widespread fraud, but rather the propagation of “the great lie” by Donald Trump that he had been cheated out of victory in an election that he actually won by a landslide. This thoroughly debunked falsehood is believed by full three-quarters of Republicans. Nearly every Republican legislature in the country is now drawing up and passing legislation based on that big lie.

If the Senate stands any hope of passing the House bill that will negate this anti-democratic wave it will have to scrap or reform the arcane filibuster rules of the Chamber. These were once used by Southern whites to block civil rights laws, but more recently deployed by Republicans to devastating effect to block Barack Obama’s agenda. The debate is in full fury in Washington.

It is hard to overestimate how consequential all of this action is, and yet Biden has no room for error. He is seeking to bring about generational reform with a razor-thin majority in the House and a 50/50 Senate — in which the casting vote will fall to Vice President Kamala Harris. The two great reformers that he has been compared with — Franklin Roosevelt and Lyndon Johnson — both had huge legislative majorities.

And while the Republican Party appears united in blocking Biden’s plan, Democrats have to herd together a coalition consisting of everyone from the conservative and independent-minded Senator Joe Manchin of West Virginia to progressive icon Alexandria Ocasio Cortez from the Bronx and Queens. Manchin and co say it’s too much, while the progressive wing of the party believes it’s not nearly enough.

Biden, who has been underestimated before, might be able to pull it off — and the strong economic recovery and his high approval ratings will help him.

But Nicco Mele, one of the foremost tech and media-savvy thinkers on the left, has warned of how close the country came to blowing up democracy in November. Though Biden won the popular vote by seven million votes, only about 44,000 votes separated Trump and Biden in the electoral college.

“This idea that we’ve won and it’s all going to be great, is lunacy. All the competitive states next time, they’re all trying to pass these laws to make it impossible to vote.”

In this dialogue of the deaf, Governor Kemp of Georgia has spent the past few days waxing indignant about Joe Biden’s claim that the Georgia voter law is “sick” — a throwback to the age of Jim Crow and racial segregation.

Many white Americans agree with Kemp, but this may just reveal how little insight they have into what black people have long experienced in America. Jim Crow was never about putting signs in front of polling booths saying that blacks couldn’t vote. The measures that prevented black people from voting were indirect — poll taxes and literacy tests in front of boards adjudicated by white election officials.

The most pernicious aspect of the Georgia law is that it puts the State Election Board under the control of the Republican legislature. Had such a measure been in place for the November election, Trump might well have succeeded in his attempts to overturn the result there and in other states where the outcome was close. He would still be president today instead of a somewhat pathetic figure sending out crazy statements from the sidelines.

Douglas Blackmon, a Pulitzer Prize-winning former Wall Street Journal reporter who has studied the Georgia election law says: “There was NO evidence of voting fraud, and barely even any apparent human error. The only thing that supposedly went wrong was that the losing party was sore that it lost the presidential election and two US Senate seats.”

On top of this avalanche of voter suppression laws, redistricting will happen later in 2021. The Republicans will start the 2022 mid-term elections with the ability to write themselves 10 more safe House seats that will make them favourites to take back the House of Representatives.

“And then,” Mele says, “I look at this giant media apparatus they have — the kind of clever amplification back and forth between talk radio, Fox News and digital publishing — and I think Holy Crap, the party of Q Anon and Donald Trump have the competitive advantage.” DM

Phillip van Niekerk spent 20 years as a journalist in South Africa, working as an Africa correspondent for the London Observer and Editor of the Mail & Guardian from 1996 to 2000.