SADC Summit: Regional leaders to meet in Maputo for tal...

SADC Summit: Regional leaders to meet in Maputo for talks on response to insurgency 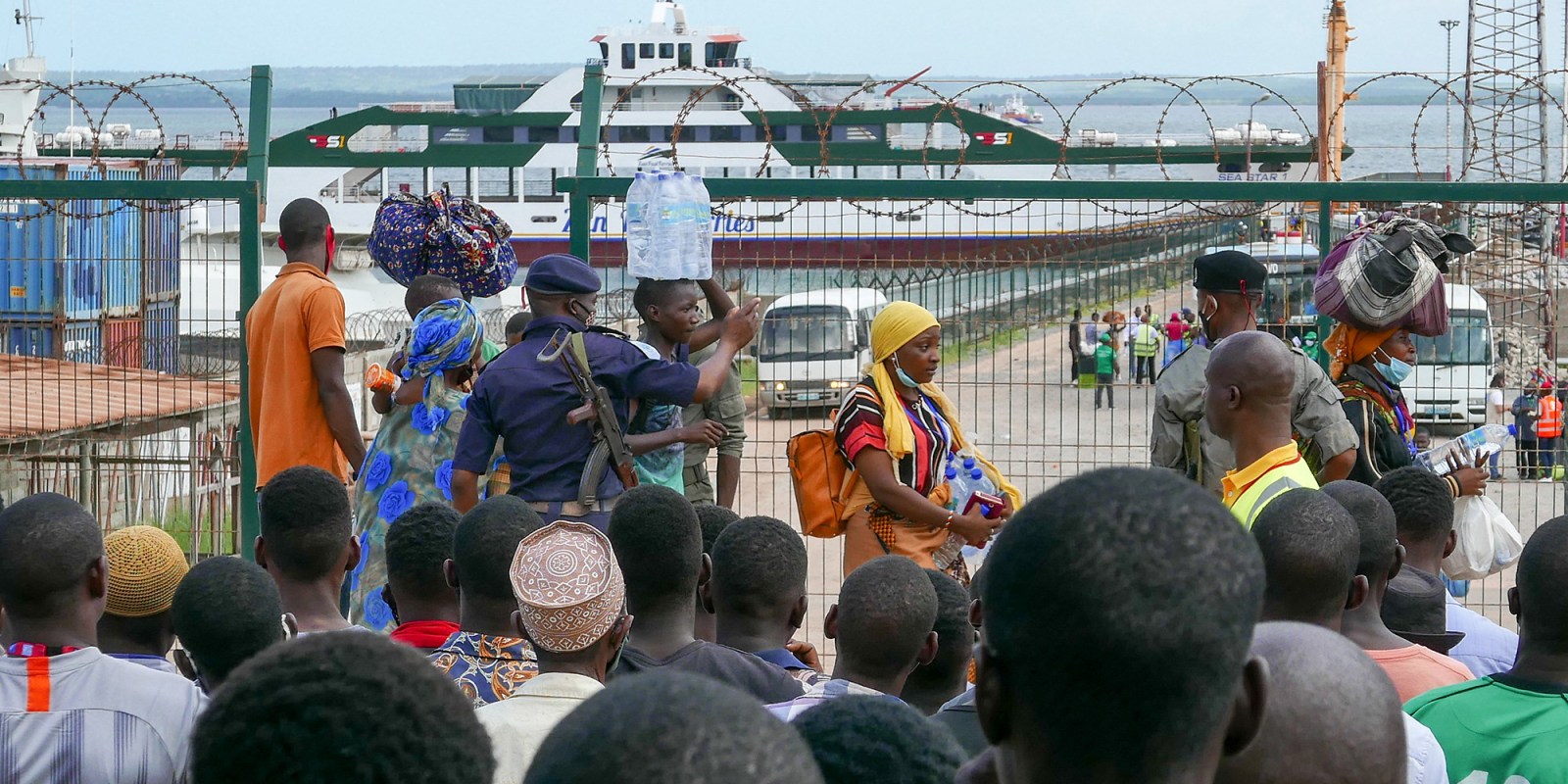 About 1,200 survivors of an organised, deadly attack last week by Islamic State-linked insurgents in Palma, northern Mozambique, arrive at the port of Pemba on 1 April 2021. (Photo: EPA-EFE / Luis Miguel Fonseca)

Regional leaders will discuss the crisis in Mozambique on Thursday at a ‘double troika’ summit of the Southern African Development Community.

Regional leaders will meet in Maputo this week to discuss a proposal to counter the rapidly growing Islamic State-linked insurgency in Mozambique’s northernmost Cabo Delgado province.

The region has been stalling in its response for many months but was finally jolted into belated action by the major insurgent attack and capture of the coastal town of Palma near the Tanzanian border which began on 24 March.

The attack prompted an international consortium headed by the French energy giant Total to withdraw all its personnel and suspend operations at the Afungi liquefied natural gas (LNG) processing plant which it is building 12km from Palma.

The Mozambique government claimed on Monday that its armed forces had recaptured Palma — now a ghost town after its inhabitants and many foreign contractors, some South African, fled before the insurgents.

Analysts remain sceptical about the reports of the Mozambique government victory, some suggesting that even if it is true, the insurgents may merely have retreated to regroup before a counter-attack.

Regional leaders will discuss the crisis in Mozambique on Thursday at a “double troika” summit of the Southern African Development Community (SADC). That will comprise the presidents of the SADC troika, Mozambique, Tanzania and Malawi; as well as the presidents of the troika of SADC’s security organ, Botswana, South Africa and Zimbabwe.

In a letter dated 4 April inviting the six countries to the summit, SADC executive secretary Stergomena Tax writes that the meeting “will deliberate on measures to address terrorism” and that the summit follows consultations between the chairperson of SADC, Mozambique’s President Filipe Nyusi, and the chairperson of the SADC Organ on Politics, Defence and Security Cooperation, Botswana’s President Mokgweetsi Masisi.

Officials said the summit would consider a proposal for the region to address the Mozambican insurgency which Masisi had developed in meetings with South African President Cyril Ramaphosa and Zimbabwean President Emmerson Mnangagwa — the other members of the SADC security organ troika — over the past few days.

After talking to Ramaphosa and then meeting Mnangagwa in Harare last week, Masisi said the three leaders had formed views on how to address the insurgency.

“One of them will result in taking this further so that we as SADC respond in a helpful manner to ensure that we assure the integrity and sovereignty of one of our own, never to be assaulted by dissident, rebellious and non-state actor forces that undermine the democratic peace and credentials of the region.”

Some officials are concerned that the summit is taking place in Maputo with Nyusi in the chair, as they believe that might allow him to manipulate the outcome.

Mozambique has so far seemed reluctant to accept a SADC intervention in Mozambique, possibly out of pride, and has preferred to handle the insurgency itself, hiring private military companies to support its own forces.

The summit will reveal Masisi’s plan and Nyusi’s response to it. Some officials suspect that Maputo’s announcement that its forces have regained full control of Palma may have been timed to influence the SADC summit by showing he has the insurgency under control.

This analyst’s reference to the insurgents’ new mobility refers to reports that they captured as many as 100 vehicles in the attack on Palma, most of them owned by companies contracted to provide services to the Afungi LNG processing project.

Mozambique’s military, FADM, flew Mozambican and foreign journalists to Palma on Sunday to prove that it had taken full control of the town, Mozambique’s official news agency, AIM, reported on Monday.

Military authorities were embarrassed during a previous visit by journalists on 30 March, when reporters came under gunfire from the insurgents, and had to be evacuated. But this time there was no gunfire, and the military seemed confident they had driven the terrorists out, AIM wrote.

“Palma has been completely taken by the Defence and Security Forces,” AIM quoted Brigadier Chongo Vidigal, spokesperson for the Northern Operational Theatre, as saying. A senior Mozambican journalist attributed the apparent surprise turnaround in the fortunes of the Mozambique government forces to Nyusi’s recent reshuffling of the military leadership. He appointed a new chief of staff of the military, Joaquim Mangrasse, who was formerly commander of the Presidential Guard, and so is close to Nyusi.

But independent security analysts are not so sure.

“Security forces are in control of the town now and Afungi is still secured,” one agreed. But, he added, “The insurgents simply withdrew… moved back to Mocimboa da Praia, are going to restock and will be back.

“It’s as simple as that. You must also keep in mind the fact that the insurgents are mobile now… then, the security forces can only be supplied by air, making it quite difficult. This war is not over… watch this space.”

Mocimboa da Praia is another coastal town, further south, that the insurgents have occupied since August last year and which they use as a base for attacks elsewhere in Cabo Delgado.

This analyst’s reference to the insurgents’ new mobility refers to reports that they captured as many as 100 vehicles in the attack on Palma, most of them owned by companies contracted to provide services to the Afungi LNG processing project.

South African companies are believed to have lost millions of rands in the Palma attack.

AIM reported that local television footage of the visit organised by the military on Sunday showed Palma was now a ghost town.

“Most of the population has fled, and so the streets are deserted and eerily quiet. In the centre of the town are ransacked buildings such as the Palma health centre, and branches of the country’s main commercial banks.”

AIM reported that Vidigal had said that the next step after recapturing Palma would be to return the many people displaced from the town by the attack. Palma had a population of about 27,000, and all or nearly all fled.

Vidigal acknowledged that returning the residents would be risky as insurgents might use the opportunity to re-infiltrate the town. DM