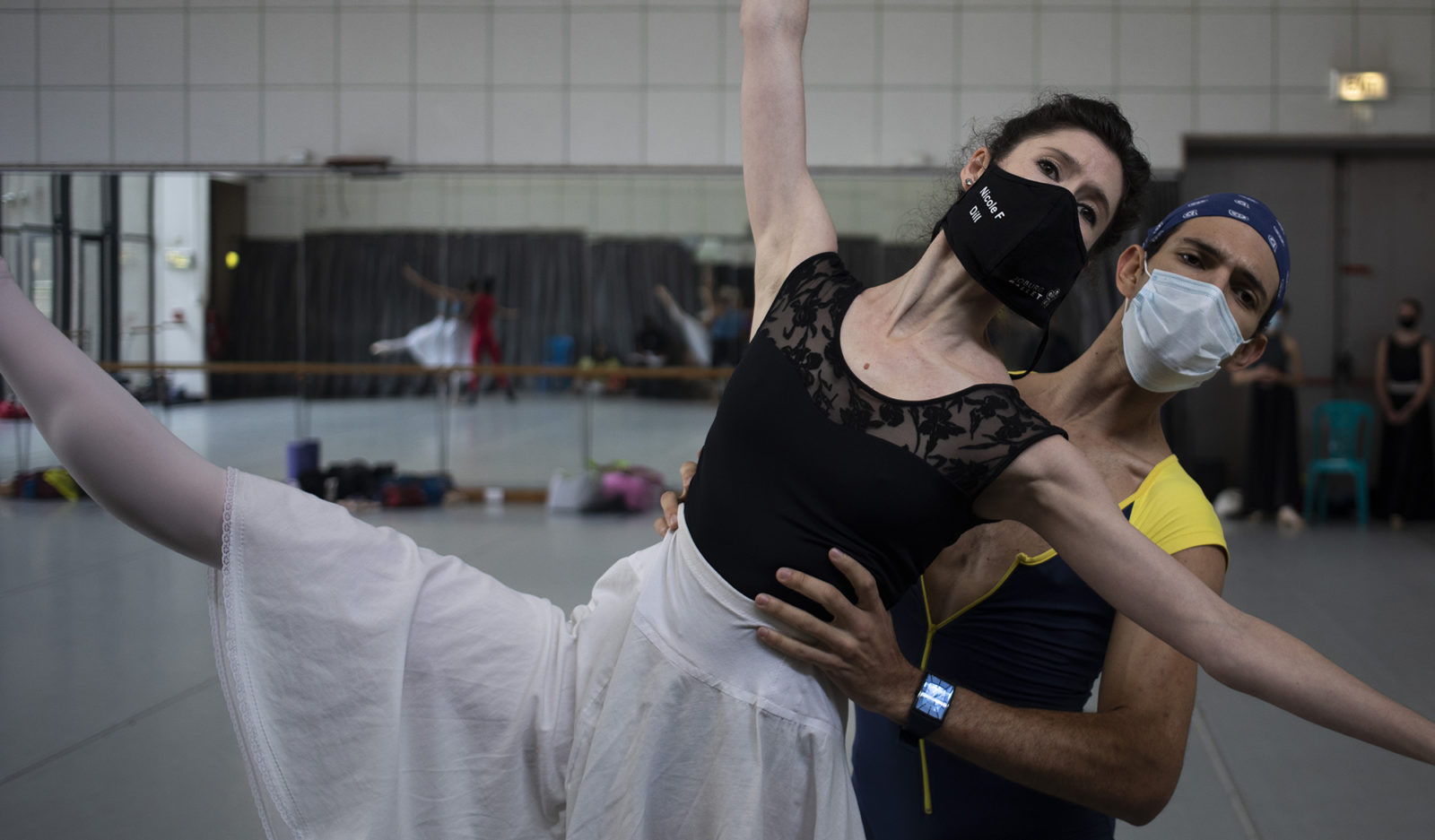 Ballet dancers perform during a rehearsal on 1 April 2021 for 'Ballet and Beyond' by Joburg Ballet at the Joburg Theatre. (Photo: EPA-EFE / Kim Ludbrook)

New York’s vaccination programme picked up speed last week, with the most populous US city reporting a record of more than a half-million doses administered. The city also stepped up its use of mobile units and pop-up sites.

Everyone in the UK will be urged to take a coronavirus test twice a week as a new system of Covid passports is assessed for wide-scale use under Prime Minister Boris Johnson’s plan to reopen the economy. Johnson confirmed on Monday that restaurants and shops will open next week for the first time in four months, but the ban on foreign travel may remain for longer.

In India, the government said it’s well equipped to deal with a second wave of infections as new case numbers climbed to more than 100,000 over the past 24 hours. Authorities in Mumbai asked private offices to switch to work from home after the financial hub emerged again as a virus epicentre.

Gayle Smith, a former US Agency for International Development administrator and chief executive officer of the ONE Campaign to eradicate preventable disease, was named the coordinator for global Covid response and health security at the US State Department.

Smith, who helped lead the Obama administration’s response to the Ebola outbreak in 2014, was introduced on Monday by Secretary of State Antony Blinken.

Smith will help oversee the Biden administration’s effort to get more Covid-19 vaccine to poor countries amid concern that rich nations like the US have been too stingy with their supplies.

New Jersey to open shots to everyone 16 and older

The state had said all adults would be eligible for the shot by May 1, in line with a goal set by President Joe Biden for universal adult eligibility. But other states, including neighbouring New York and Connecticut, announced earlier eligibility dates as vaccine supply began ramping up.

A record virus surge is eroding support for the Chilean government’s Covid-19 policies and tarnishing one of the world’s fastest vaccination drives, according to a survey.

Thirty-eight percent of Chileans back President Sebastian Pinera’s response to the coronavirus, down from 58% on February 26, according to a Cadem poll published on Monday. Meanwhile, 85% of respondents say it will take more than six months for daily life to return to normal, with open schools and stores.

Pinera’s administration is grappling with a resurgence of the virus that’s driven hospitalisations and daily infections to all-time highs. Critics say Chile shouldn’t have encouraged travel during the southern hemisphere summer, and that the economy was reopened too quickly.

UK Prime Minister Boris Johnson confirmed restaurants and shops will open again for the first time in four months as England’s lockdown is eased next week, but the ban on foreign travel may remain for longer.

The earliest date for resuming non-essential international travel will be 17 May, officials said. Meanwhile, a plan for a new system of Covid passports is being developed to make it easier for events with live audiences to resume and travel restrictions to be eased. But the passports may not be ready until the northern hemisphere autumn, according to The Telegraph newspaper, citing unidentified senior government officials.

“It shows what is possible,” the mayor said at his daily briefing, adding that the city will be receiving 77,000 new doses from Johnson & Johnson, whose vaccine requires only one shot. New York is also stepping up its use of mobile units and taking vaccines to housing complexes and community centres for pop-up sites.

Passengers into Singapore to use travel pass

People flying to Singapore will be able to use the International Air Transport Association’s travel pass to share their pre-departure Covid-19 PCR test results at check-in and on-arrival from 1 May.

Iran’s outbreak worsened following a two-week public holiday, with the country reporting 13,890 new infections and 172 deaths overnight. Travel restrictions and the closure of non-essential businesses are to be enforced across Tehran, which has been declared a “red zone”. The country will take delivery of some 700,000 doses of the AstraZeneca vaccine on Monday, its first shipment through the World Health Organization’s Covax initiative.

Italy extended current restrictions for travellers coming from EU countries until 30 April. It also added Austria, the U.K., Ireland and Israel to the list of flagged countries from 7 April.

Some of the new cases reported were found from clusters discovered at entertainment venues in downtown Bangkok, as well as a prison. Authorities cautioned Thais about going to bars and nightclubs. The increase in new infections comes before a national holiday next week.

India added more than 100,000 infections in 24-hours, a record increase that pushed its richest state to order offices to work from home and shut malls and restaurants throughout April.

Maharashtra, home state of the country’s financial hub Mumbai and contributor of about 15% of national output, halted all non-essential services from 8pm on Monday. Private offices were asked to switch to work-from-home, with some allowances for banks and stock exchanges.

Indonesia to extend limits on movement

Restrictions on people moving around the country will remain in place for two weeks starting on 6 April, a spokesperson for Indonesia’s Covid-19 task force said, with more areas included in this round.

Everyone in England will be urged to take a coronavirus test twice a week as a new system of Covid passports is assessed for wide-scale use, under Prime Minister Boris Johnson’s plan to reopen the economy after lockdown.

Free test kits will be made available through local pharmacies, community centres and home delivery services, when the new regime goes live on 9 April.

With most of the adult population now having received a vaccine, the government believes rapid testing of the whole population and a system of Covid status certification will help keep control over the pandemic as restrictions are eased.

China is ramping up its Covid-19 vaccination push, aiming to be twice as fast as the US by pressuring Communist Party members, bank workers and college staff to get shots, as the lagging roll-out threatens to undermine the advantage it secured by effectively wiping out the virus.

The inoculation effort has been stepped up markedly in recent weeks, with China now administering an average of five million doses a day from fewer than a million at the start of the year. While a significant increase, that translates to five doses for every 100 people, compared with 25 in the US and 56 in Israel, according to Bloomberg’s Vaccine Tracker.

The Texas Rangers will reopen their stadium at full capacity for their home opener on Monday, ABC News reported, the first Major League Baseball team to do so since the pandemic began a year ago.

Some 40,000 seats may be filled at the stadium in Arlington, west of Dallas. It comes about a month after Texas’ Republican Governor, Greg Abbott, ended the state’s mask mandate and encouraged businesses to open fully. Masks will be required for the Rangers’ game, though.

The other Texas baseball team, the Houston Astros, plans to operate at 50% capacity during April and will require fans to wear masks except when they’re eating.

California, with a population of about 40 million people, has already administered more than 19.7 million Covid vaccines, according to the health department’s website. There were 2,400 new cases reported on Sunday and 109 more deaths. The state’s seven-day positive test rate was 1.7%, down from 1.8%.

Cases high as France locks down

France reported 80,711 new coronavirus cases this weekend as the country enters a third nationwide lockdown. The number of ICU patients has risen by 87 since Friday to 5,341, according to French health authorities. There were 370 deaths in the past 48 hours, taking the total to 96,650.

Cases have been surging in France since December due to more contagious, deadlier variants, forcing President Emmanuel Macron to abandon a strategy of regional measures and opt for another lockdown. DM