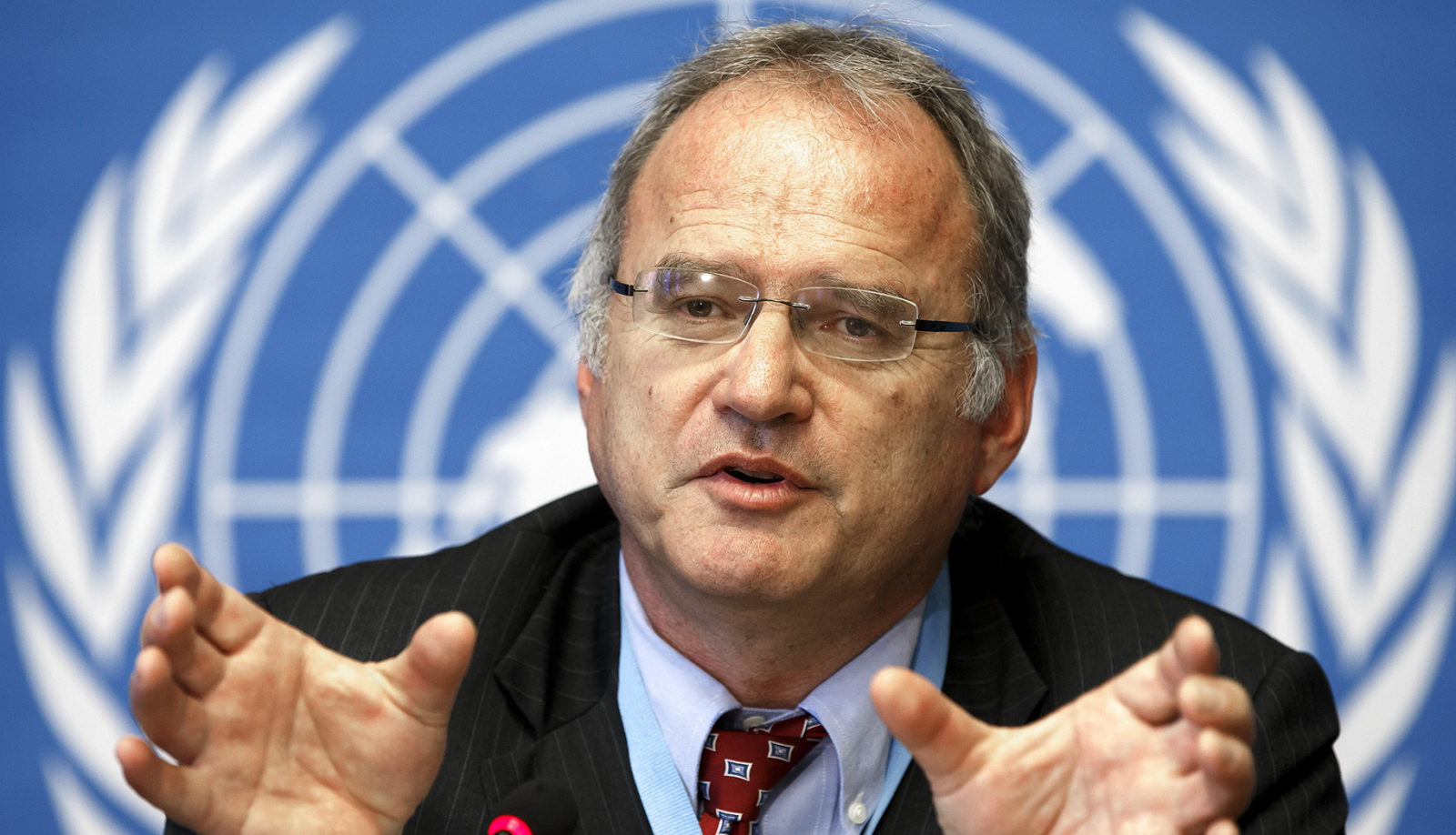 On Sunday, 28 March, Christof Heyns died while walking with his brother in the mountains surrounding Stellenbosch. We worked with Christof Heyns in different capacities, and also at different times during his career. In the course of these short interactions, Christof gave us a great deal. We wish to impart some of that in his memory, to show who it is that we have all now lost.

Since his death, much has been written of Christof’s sterling legal career and the manner in which he pioneered human rights in South Africa, Africa and internationally. His role as a leading scholar of regional human rights law and a practitioner serving as United Nations Special Rapporteur on Extrajudicial, Summary or Arbitrary Executions (2010 to 2016) and as a member of the UN Human Rights Committee (2017 to 2020) has been celebrated.

All told, he was a giant of the human rights world.

But to us, what is more important than what Christof achieved, is the way in which he did it – in a manner that showed precisely who he was.

He was an ideas man who dreamt big dreams – an idealist, constantly imagining a world that was different from the one in which he happened, at the time, to find himself.

At the same time, Christof had his feet firmly on the ground. He combined an acute practicality with a dogged determination – qualities that made it possible for him to create what he imagined. Once he had thought something up, he worked furiously to create it and to make it work. In kind with one of his favourite artists, Leonard Cohen, Christof refused “to be held like a drunkard under the cold tap of facts”.

If something did not work at first, he would try another way. Failures and setbacks were met only with a shrug and wry smile; followed directly by a new plan. If the “world” resisted his ideas, Christof pushed back, until the “world” gave way.

Christof was also, at heart, collaborative. He had a knack for enthusing people, and for getting them on board with his plans. This was, of course, in part to enlist one’s aid. But far more clearly, this was because Christof was himself so enthusiastic about his ideas, wanting people to share in them and benefit from them. Christof would involve one, asking advice, and giving real responsibility.

In the process he taught and mentored, exposing others to experience – and he opened doors. Once part of Christof’s team, you never left, in the best way possible. Although all three of us, as invariably happens in long professional associations, were at times in disagreement with him – always soon after a disagreement, an email would come in which Christof would wonder whether it was not time to resurrect this or that dormant project; or just to find out whether one remembered some line from a Valiant Swart song.

Here are three brief recollections, one from each of us, to illustrate Christof’s spirit:

Christof will no doubt be remembered for his incredible contribution to the promotion of international human rights law. To me, however, it was his efforts to expose African students to the real-life developmental and human rights challenges in the region, and to inspire us to roll up our sleeves and be part of the solution.

In 1994, Christof founded the Southern African Student Volunteer Organisation (Sasvo), which initially involved small teams of student volunteers to do voter education in preparation for the 1994 South African elections. Sasvo quickly grew into a formidable enterprise, involving thousands of students from across southern Africa – fixing dilapidated schools in Mozambique and Rwanda, building houses in rural Tanzania, and running weekend tutorial classes in township schools in Soshanguve and Mamelodi.

Sasvo, motto “Building Africa Ourselves”, was inspired by Christof’s pan-Africanist approach to all his work. So, the concept was simple, to take students from the safe environment of university campuses straight to the realities of poverty and inequality left by decades of apartheid and conflict. Groups of students would volunteer their time and labour, and work alongside communities on existing development projects. While actual impact of the volunteer work may have been limited, it was the unique opportunity for young people from vastly different backgrounds and nationalities to spend a few weeks together doing physical work in very basic conditions, sharing experiences and ideas that will last a generation.

One of my fondest memories was a train trip from Johannesburg to Maputo in 1997 with 15 students from Lesotho, South Africa, Swaziland and Botswana, to fix the Unidade II Secondary School, outside Maputo. The last stretch of wobbly track between the Ressano Garcia border post and Maputo was a reality check to us all, with evidence of the recent war still obvious – burnt-out tanks and buildings scarred by bullet holes.

Sadly, Sasvo did not survive, despite the energy and vision of Christof.

There was never enough funds to cover the ever-increasing list of projects and, on more than one occasion, Christof had to take out a second bond on his home to subsidise our adventures.

The impact the programme had on myself and other students of that time will continue for generations.

Christof taught me legal philosophy in my third year as a law student at UP. For the exam we had to answer only one question, “What is the law?” As someone who didn’t share the passion for rules and procedures, and parroting facts and names of cases of some of my fellow students, I was relieved and intrigued by the freedom given to us. Even now, decades later, I remember the joy of crafting that essay.

In the same year I applied for the position of departmental assistant in Christof’s department. Christof interviewed me and after asking only a few questions told me that I didn’t get the position. When I asked him why, he said that “I didn’t look to him like someone who will be willing to make photocopies and perform the kind of administrative duties that would have been expected from me”.

I was taken aback at the time, but of course realised eventually that Christof was right – I didn’t then, and probably still don’t, like making photocopies.

This first interaction paved the way for our future working relationship. I wasn’t part of Christof’s immediate team. But I had the privilege to work closely with him later as part of the faculty management team. When the head of department position became vacant, I agreed to act until a suitable candidate could be found. After about 10 months of acting with no luck in securing a permanent HoD, Christof said to me, “you’ve been doing this for so long, it can’t be that bad”. And it wasn’t.

I applied and will always remember the term as HoD with Christof as dean as a special and exciting, challenging and rewarding time.

Of course, Christof will be remembered for his immense contribution to human rights law, but many will remember also his hand in starting the annual faculty festival, a day that, like many of his other projects, provided space and time for those who were willing to see it, to become part of something extraordinary, albeit fleeting. “I’ll remember you well” [Christof] … you’ve got the music”.

In her tribute to Christof, Sandra Liebenberg recalls his contribution to the drafting of the 1996 Constitution of South Africa.

Christof proposed that a version of the human rights reporting systems that operate in the international and various regional human rights systems be introduced at domestic level in South Africa, with organs of state required to report regularly to the Human Rights Commission on their progress in realising socioeconomic rights.

Fresh out of my LLB I had just started working at the UPCHR and Christof roped me in to assist him in preparing his submission to the Constitutional Assembly. When the time came to present the proposal in person at the public hearings that formed part of the drafting process, Christof asked me to accompany him to Cape Town.

I thought I would be there to carry bags and drinks, but to my surprise, on our arrival, Christof said that, as I had assisted him in drafting the proposal, it was only fair that I should get to present it at the public hearing. And there I was then, just graduated, standing up in Parliament before a host of people I had only read about and were in awe of and saying Christof’s piece. Of course, nervous and inexperienced, I made a hash of it; but the force and clarity of Christoph’s proposal ensured that it was nevertheless included in the Constitution, as section 184(3).

Afterwards, true to his nature, Christof also involved me in a project he had set up with Sandra to advise the Human Rights Commission on its implementation of section 184(3). Again, I was in the thick of things, thanks to Christof, as I would be many more times in other contexts thereafter, always thanks to Christof.

Thinking and doing; self and others

Christof Heyns was someone who could see a different world and make it, for himself and for others. In a world where universities have degenerated into places of the possible only and not of ideas, where our country has become subsumed by the politics of the grubby, of what I can grab for myself, Christof’s capacity to dream and to do, and to do for others as well as himself, in addition to his warmth, wit and generosity is what will most sorely be missed now that he is dead. DM/MC