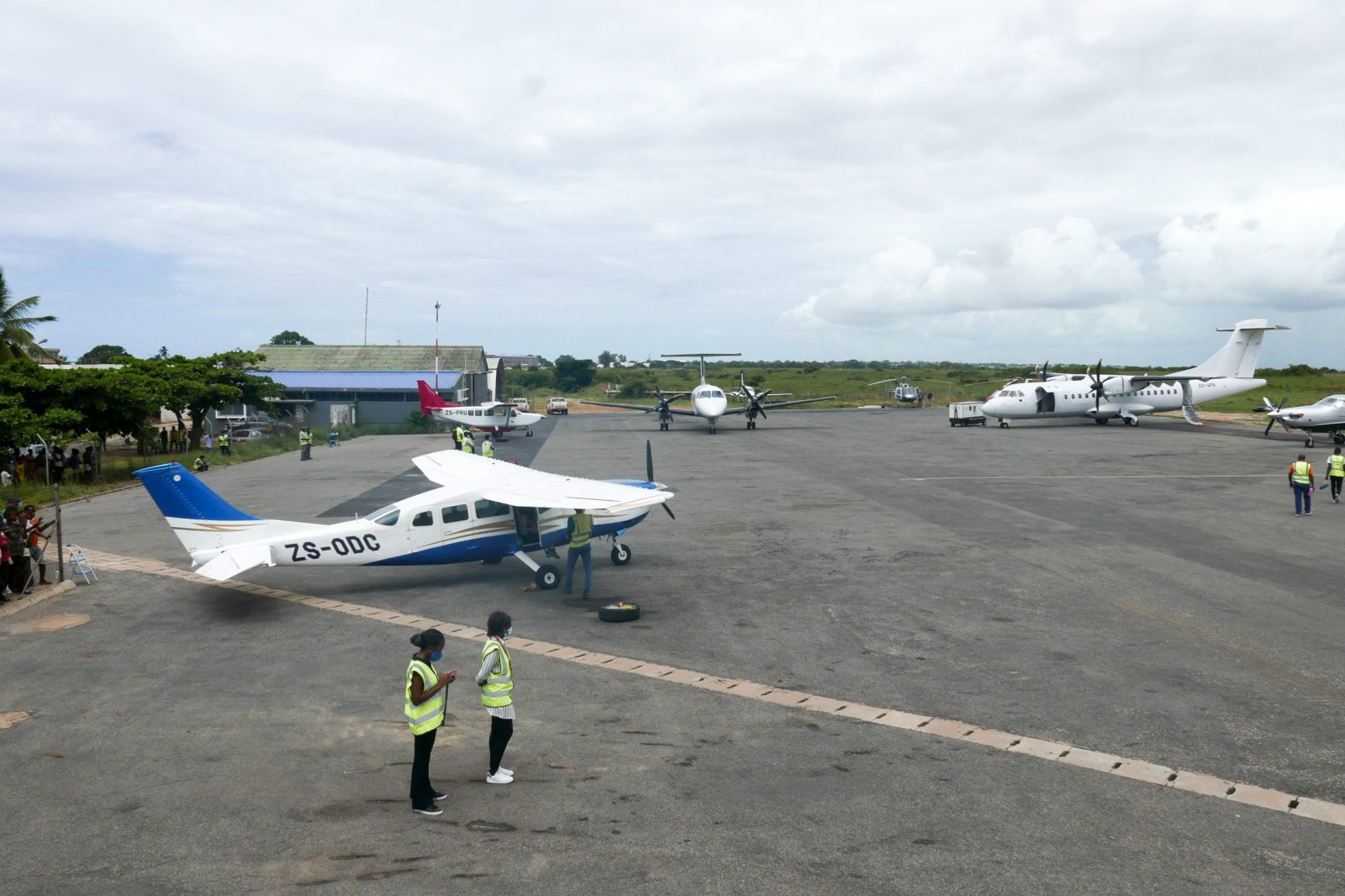 Pemba airport, where injured displaced people from Palma, who took refuge in Afungi, have been airlifted to, among them women in labor, adults and children suffering gunshot wounds, among other injuries sustained in attacks by rebel groups, in Pemba, Mozambique, 30 March 2021. Since Sunday, several boats, private and others organized by Total and the authorities, have been transporting people from Palma, in a number that should already be over 2,000, but without official confirmation. EPA-EFE/ESTEVAO CHAVISSO

The future of the $60-billion project is now in doubt.

The French Energy company Total withdrew all its personnel from its Afungi liquid natural gas (LNG) facility near Palma, on Friday, in the wake of last week’s insurgent attack.

This full withdrawal has placed a large question mark over the future of the $60-billion project to tap Mozambique’s vast Rovuma Basin offshore gas reserves which it is counting on for its future development.

Total had announced a partial withdrawal after insurgents affiliated to Islamic State overran Palma last week. But French officials and security sources in Mozambique told Daily Maverick that Total had now pulled the last of its personnel out on Friday. This followed a resurgence of jihadi violence this week, including an attack on the command post of the Joint Task Force of government security forces between Palma and Afungi, about 12 kilometres southeast. This is the force assigned to defend Afungi.

Total’s complete withdrawal had left the defence of Afungi – and the future development of Rovuma Basin gasfields – to the Mozambique government security forces.

These forces have so far shown themselves inadequate to the task and their capabilities appear to have been significantly diminished by the withdrawal from the battle this weekend of the South African private security company Dyck Advisory Group. (DAG)

DAG’s small helicopters gunships have been providing air support to the Mozambique ground forces for a year and seem to have prevented the insurgents from making even greater gains. Over the last week, they were very active in Palma, helping to escort locals and expatriate contractors to safety by firing on insurgents from the air and also rescuing over 200 stranded individuals.

DAG’s one year contract expires on April 6 and it tried to negotiate an extension of at least three months but Maputo refused to budge. So the outfit was due to fly its last sortie on Friday – still battling insurgents in Palma – and then to leave after a few days.

The Mozambique government has hired or bought three similar Gazelle light helicopters and three larger Russian helicopter gunships from other sources including the South African arms company Paramount which is training Mozambican pilots to fly at least the Gazelles. But the pilots do not seem ready for combat yet and so security analysts believe there will be a security vacuum now – which the insurgents might very well fill.

There is some speculation that the Mozambique government’s refusal to renew DAG’s contract may have been a factor in Total’s decision to pull out on Friday. Daily Maverick approached the company’s spokesperson in Mozambique for confirmation of its withdrawal and the reasons why but has not received a reply.

Total had halted the gas project in December and withdrawn most of its staff after insurgent attacks nearby. On March 24, last week, Total announced that it was returning to Afungi after a three-month absence because the government had guaranteed a safe radius of 25 kilometres around the Afungi plant. Within hours the insurgents launched their offensive against Palma.

Alex Vines, head of the Africa programme at the think tank Chatham House in London, suggested to Daily Maverick that Total may have been putting pressure on the Mozambique government to get its act together on security.

Total’s full withdrawal of personnel on Friday raises the important question of whether it will ever return. Asked this question, a French official source told Daily Maverick:

“Indeed, they are assessing the situation because the stop-and-go is very expensive for the companies. It is difficult to work under that threat and pressure so it will depend on the Mozambican and international response to the crisis.”

Alex Vines, head of the Africa programme at the think tank Chatham House in London, suggested to Daily Maverick that Total may have been putting pressure on the Mozambique government to get its act together on security.

“Total made the pull decision really early this morning (Friday). They haven’t declared Force Majeur on the project which is an important statement but it’s easier to walk away if the government doesn’t turn around the insurgency.”

Vines said he believed Maputo had already accepted before the Palma attacks that it needed to significantly improve its counterinsurgency efforts “and the insurgency was already feeling pain.”

“The Palma attack has fast-forwarded existing plans and let’s see. Meaningful progress will take some years, not months but should be possible. Cabo Delgado is not the Sahel or Chad Basin – it’s a patch of insurgency. It’s striking that most Mozambicans flee the insurgency – now over 700,000. This is not a popular uprising.”

“Well DAG didn’t get the three-month contract extension and so over to Paramount.”

He added that although there had been divisions in the Mozambique government, the plan was always to have Paramount take over the procurement of the new Gazelles and other equipment.

“So in sum: Total remains committed to this project and will continue to honour its MoU agreements with the government. But Total’s pullout from Afungi does increase the stakes and pressure on the government to greatly improve the security situation.”

The insurgency has also impacted the many South African and other international companies which were sub-contracting to Total at Afungi. One South African building contractor, Adrian Nel, 40, from Kwa/Zulu-Natal was killed in the insurgent attack on Friday. Scores of other contractors have returned to South Africa. DM