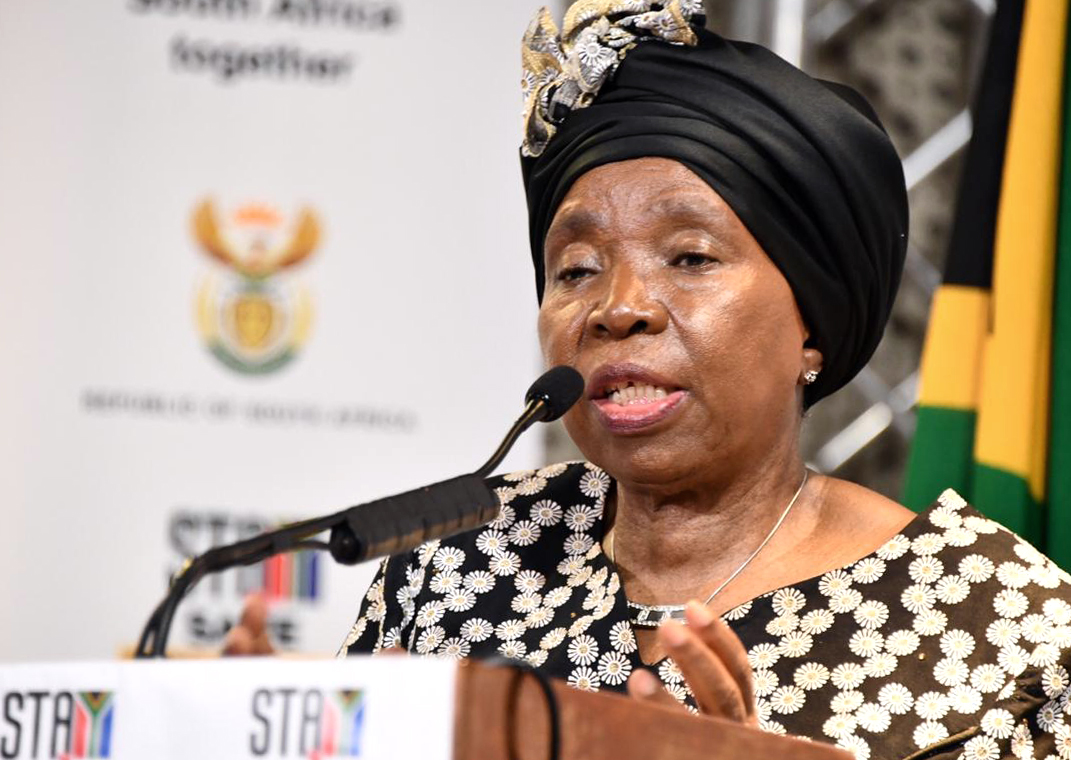 Minister Nkosazana Dlamini Zuma has urged the public to remain cautious and adhere to the revised alert level 1 Covid-19 regulations over the 2021 Easter weekend.(Photo: Elmond Njiyane/GCIS)

Minister of Cooperative Governance and Traditional Affairs (COGTA), Nkosazana Dlamini Zuma has urged the public to remain cautious and adhere to the revised alert level 1 Covid-19 regulations over the Easter weekend.

“We are also stressing that the health protocols should still be observed — people must still wear masks, sanitise [and socially distance] at all gatherings,” said Dlamini Zuma.

Briefing the media on Thursday morning, Dlamini Zuma provided the details of the amended regulations, which were announced by President Cyril Ramaphosa, on 30 March.

In his national address, Ramaphosa had said that the sale of alcohol for off-site consumption would be prohibited for the four days of the Easter weekend and all gatherings will be restricted to 250 people indoors and 500 outdoors.

The revised regulations were gazetted by Minister Dlamini Zuma on Tuesday, 30 March:

“Alcohol will be sold as normal until Thursday, [1 April],” said Dlamini Zuma.

The sale of alcohol for off-site consumption will be prohibited from Friday, 2 April, to Monday, 5 April, she said.

“It will then start being sold again on Tuesday, [6 April],” she added.

However, the on-site consumption of alcohol on these days in restaurants, bars and shebeens is permitted until 11pm, said Dlamini Zuma.

Dlamini Zuma pleaded with establishments that have on-site licences not to turn themselves into off-site alcohol traders.

According to Dlamini Zuma, the National Coronavirus Command Council (NCCC) had received reports from police of on-site license holders who are selling alcohol to patrons “to take home” when they leave the premises.

“That is not allowed,” she said.

The transportation of liquor is permitted on Thursday, but between Friday and Monday people will not be allowed to transport alcohol in their cars when travelling “from one place to the other,” she said.

Over the weekend, police will be conducting roadblocks to restrict the transportation of alcohol, said Dlamini Zuma.

Dlamini Zuma explained the reasoning being the government’s decision to ban off-site liquor sales over the Easter weekend, and said the decision was a precautionary measure following the rapid rise of Covid-19 infections during the December festive season.

“Having learned from what happened in December, we have to take precautions because we know that during the Easter weekend, there [are] lots of movements of people … Besides faith-based gatherings there are also all sorts of other gatherings,” said Dlamini Zuma.

Last year, faith-based gatherings were not permitted over the Easter weekend, “so it’s important that this year at least religious gatherings should take place during this holy weekend and subsequently” as infection rates are currently lower, said Dlamini Zuma.

All faith-based gatherings or religious gatherings, as well as social, political and cultural gatherings, are permitted, she said.

However, all gatherings are limited to no more than 250 congregants inside and 500 congregants at outdoor gatherings, said Dlamini Zuma. This is an increase from the previous limit capped at 100 people indoors and 250 outdoors.

The new restrictions on gatherings will remain in place after the Easter weekend, but will be reviewed within the next 15 days based on the Department of Health’s assessment of infection rates, said Dlamini Zuma.

To “ensure all congregations remain safe”, it is very important to strictly adhere to health protocols by wearing masks, sanitising and socially distancing by remaining 1.5 metres apart at all times, said Dlamini Zuma.

The NCCC is requesting that congregants “congregate as normal” and not travel and attend other places of worship where they would not normally attend, she said.

According to Dlamini Zuma, the mixing of congregations could create “super-spreader events”.

Interprovincial travel is permitted over the Easter weekend but the nationwide curfew from 12pm to 4am remains in place, said Dlamini Zuma. DM