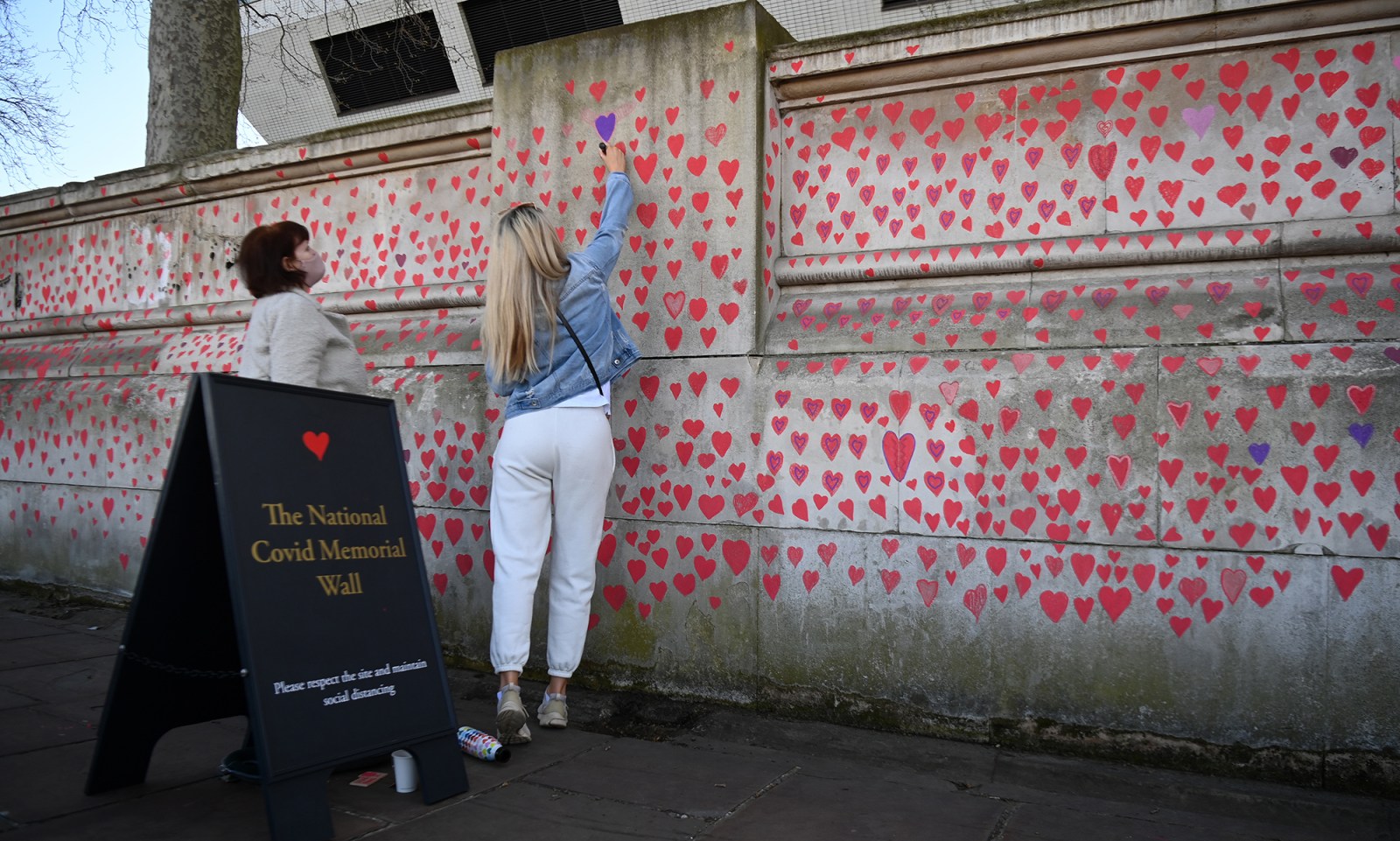 A volunteer paints hearts on the wall along the embankment opposite parliament as part of the National Covid Memorial Wall in London, Britain, 30 March 2021. (Photo: EPA-EFE / Andy Rain)

A World Health Organization-China study on the origins of the coronavirus is still drawing fire, with WHO’s chief saying it didn’t adequately analyse the possibility of a laboratory leak. The White House also criticised the report, calling it incomplete and faulting data and access provided by China.

Covid-19 deaths in the US are expected to bottom out in the next two weeks and then may inch higher as the nation races to blunt an incipient new wave of cases with its vaccination campaign.

Kenyans are paying $70 a shot for the Russian-made Sputnik V vaccine. Chile is boosting its vaccine supply, signing an agreement with CanSino Biologics for 1.8 million Covid vaccine doses that will start to arrive in May. Brazil sets a new daily record for deaths.

Transport demand down in Australia

Demand for public transportation fell in Australia in the past week while consumption, spending and other alternative indicators mainly increased amid little change in coronavirus-related restrictions.

In Sydney, in the week ended 24 March, demand for public transport was down 12.4% from the week earlier, while the number of seated diners in Australian restaurants was 79% higher on 29 March compared with the same day a year earlier, an improvement from the 53% increase recorded on 22 March, according to OpenTable.

Brazil hit a record of 3,780 Covid-19 deaths as the pandemic spirals out of control in Latin America’s largest country. Total coronavirus fatalities reached 317,646 and 84,494 new cases were registered in the past 24 hours, totalling almost 12.7 million, while the country works to speed up vaccination under new Health Minister Marcelo Queiroga.

The country’s health regulator issued a good practices certificate for Janssen’s facilities, but denied the same certification for Bharat Biotech. Brazilian foundation Fiocruz expects to file a request to start testing the AstraZeneca/Oxford vaccine in children, the head of the organisation, Nisia Trindade, said in an online event promoted by the World Health Organization.

Wells Fargo is making plans to bring its employees back into offices in September.

The US bank with the largest workforce has about 200,000 employees working from home and is extending that arrangement through 6 September. It aims to return to a “more normal operating model” that month, according to a memo from Chief Executive Officer Charlie Scharf and Chief Operating Officer Scott Powell.

“The significant increase in vaccination availability” has encouraged the bank and allowed it to begin planning for the employees’ return, the executives said in the memo.

Chile signed an agreement with CanSino Biologics for 1.8 million Covid vaccine doses that will start to arrive in May, the government’s Vice-Minister of Trade, Rodrigo Yanez, said in an interview.

The country has already received close to 13 million total shots against Covid-19 and it’s expecting the arrival of an extra 15 million doses by June to reach herd immunity in the first half of the year, Yanez said. CanSino, which is a one-shot vaccine, will provide 1.8 million doses, while the remaining supply will come from Pfizer-BioNTech, Sinovac and AstraZeneca.

Kenyans have begun inoculations with Russia’s Sputnik V vaccines for a fee after the nation’s authorities approved the shots for emergency purposes.

A single shot costs 7,700 shillings ($70.30), according to Nairobi-based lawyer Donald Kipkorir, who had an injection on Tuesday.

Covid-19 deaths in the US are expected to bottom out in the next two weeks and then may inch higher as the nation races to blunt an incipient new wave of cases with its vaccination campaign.

A plateau or small increase — instead of the hoped-for decline — could mean tens of thousands of additional fatalities.

The deaths are likely to dip to 6,028 in the week ending 10 April before slightly increasing, according to the Covid-19 Forecast Hub, a project from the University of Massachusetts Amherst’s Reich Lab. Its so-called ensemble forecast, which was updated on Tuesday, is based on dozens of independent models and projects fatalities four weeks into the future.

Ireland will begin easing some restrictions from 12 April after more than three months in lockdown. Travel restrictions will be loosened while some sports and construction will resume, Irish Prime Minister Micheál Martin said in a national address. Limits on household mixing will also be reduced. The government may open so-called non-essential retail in May and hotels in June, depending on the state of the virus, Martin said. Vaccines are to ramp up sharply in the second quarter he added. “We are on the final stretch of this terrible journey,” he said.

The World Health Organization’s chief said a mission to study the origins of the coronavirus in China didn’t adequately analyse the possibility of a lab leak before it concluded that the pathogen probably spread from bats to humans via another animal.

Director-General Tedros Adhanom Ghebreyesus said even though the international team of scientists determined that a leak was the least likely hypothesis for the origin of the pandemic, it requires further investigation. He said he’s ready to deploy additional missions involving specialist experts as he doesn’t believe the assessment was extensive enough. He made the comments in a briefing to WHO member countries on Tuesday.

Greece reported 4,340 new Covid-19 cases on Tuesday, the highest daily increase since the start of the pandemic. The last record was 3,586 new cases on March 23. Despite the rise, the government is coming under increasing pressure to begin a faster easing of lockdown measures to help the retail and restaurant sectors. Medical advisers to the government will meet on Wednesday to formulate recommendations, with non-essential shops seen reopening in some form from 5 April and citizens allowed to move again outside the municipality where they live from 3 April. A ban on movement between regions will likely continue.

Google will donate $1-million to help New York City reach its goal of five million vaccinations by the end of June, Mayor Bill de Blasio said. The donation includes advertising grants to run ads on where, when and how to get a vaccine, as well as a grant from the tech giant’s philanthropic arm to set up an inoculation centre at the Fulton Houses public-housing complex in Chelsea, near Google’s main New York office. De Blasio said on Tuesday that the city is approaching four million vaccine doses.

Bulgaria eases some limits ahead of election

Bulgaria will reopen restaurants and pubs with open-air space, as well as gyms, theatres and museums with limited capacity from 1 April, the health ministry said in a statement. Kindergartens will reopen on 5 April. The Balkan country reported on Tuesday 203 new coronavirus death cases, the highest since 5 January, amid a new wave of infections caused by the UK strain, as it is preparing to hold a general election on Sunday.

Iceland said travellers from so-called danger zones, which is most of Europe, will need to stay in a special hotel for their obligatory five-day quarantine upon arrival. The reason is that infections have been spread by visitors who have broken quarantine to view a new volcanic eruption.

Germany is planning to recommend the use of AstraZeneca’s vaccine only for people older than 60 after new data emerged on potential side effects from the shots.

The country’s vaccination commission has drafted a decision paper that leaves open the possible use for younger people at a doctor’s discretion, according to a person familiar with the draft document. A final decision still needs to be made and could be announced as early as Thursday.

BioNTech and Pfizer raised this year’s production target for their vaccine to as many as 2.5 billion doses, with the German biotech’s chief executive officer predicting a version of the shot that can be stored in refrigerators will be ready within months.

The new target represents an increase of about one quarter from an earlier estimate. BioNTech said it expects €9.8-billion in revenue from the supply contracts signed already, which amount to 1.4 billion doses. Revenue expectations include milestone payments from BioNTech’s partners and will rise as more orders are signed, the company said.

The government of Maharashtra, the Indian state that houses Mumbai, on Tuesday ordered oxygen suppliers to reserve 80% for medical use. The new rule will stay in force through 30 June. India has seen a recent resurgence in infections that threatens the nation’s economic recovery. DM