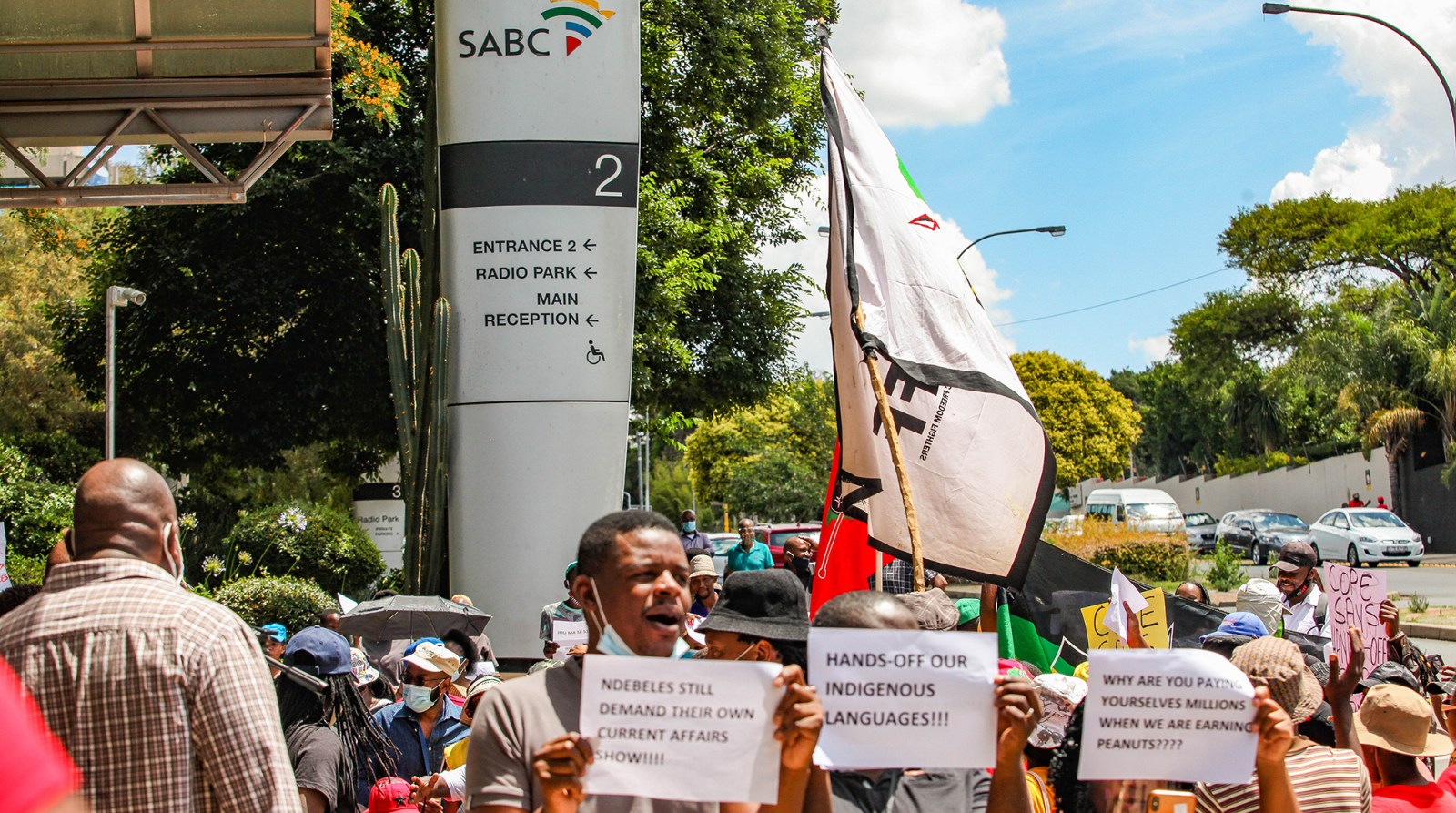 Members of the ANC and Nehawu protest outside the SABC's Auckland Park offices in Johannesburg, demanding an end to planned retrenchments on 20 November 2020. (Photo: Gallo Images /.Sharon Seretlo)

The SABC has announced that 621 people will leave the organisation at the end of March 2021 in one of the most brutal retrenchment exercises undertaken by the state broadcaster. Staff will be cut by 20%.

The retrenchment process at the SABC has been long, difficult and extremely political, with communications minister Stella Ndabeni-Abrahams at one stage instructing the corporation to stop its planned retrenchments, arguing that the ailing public broadcaster had not followed due process.

That same argument was echoed by the trade unions at the SABC, but in a surprise statement on Tuesday, 30 March, the parastatal announced that the retrenchment process had been concluded.

The SABC’s Group Chief Executive Officer, Madoda Mxakwe, said the retrenchment process had been “extremely difficult for all stakeholders and became emotionally charged at times”.

The extended process also created prolonged uncertainty and a sense of despondency among many. This was understandable and regrettable, he said.

“However, despite these challenges, the Section 189 process was a necessary component of the SABC’s turnaround plan to ensure the public broadcaster’s long term financial sustainability and capacity to fulfil its extensive public mandate.

“The process was necessary to preserve and reposition the SABC as a resilient and viable public broadcaster and public media organisation.”

Notwithstanding the claims of unions, the organisation had embarked on a thorough benchmarking exercise prior to the retrenchment process and had come to the unsurprising conclusion that the organisation was overstaffed.

The total staff complement was just under 3,000 in 2020, with a further 1,800 contracted freelancers. The total annual salary bill stands at R3.2-billion a year. The aim of the Section 189 process was to slash around R700-million from this bill.

Compared with other media houses, salaries at the SABC remain absolutely enormous. The eight senior managers get paid on average R2.4-million a year, with 27 managers earning not much less. But the big spend is on 374 middle management posts, where the average annual salary is R1.2-million a year, costing the organisation nearly half-a-billion rand a year.

These salaries were hugely boosted during the term of previous CEO Hlaudi Motsoeneng. It was a time that also saw the organisation losing credibility as it tailored its coverage to suit the agenda of former president Jacob Zuma.

The new management now has the unenviable task of trying to re-establish the financial probity of the organisation, while at the same time fulfilling its public service mandate.

The organisation has made some moves in the media space over the past few weeks, announcing a deal with eMedia Investments, the company behind free-to-air satellite service Openview. The deal will see SABC television channels broadcast on Openview’s free-to-air section of its bouquet.

Yet the organisation is still faced with an uphill battle.

In its 2020 annual report, recording the period to the end of March of that year, the corporation reported a net loss of R511-million – a 6% decline on the previous year off revenue of R5.7-billion.

And this was before the Covid-19 pandemic struck, so its financial struggles may not be over. DM/BM