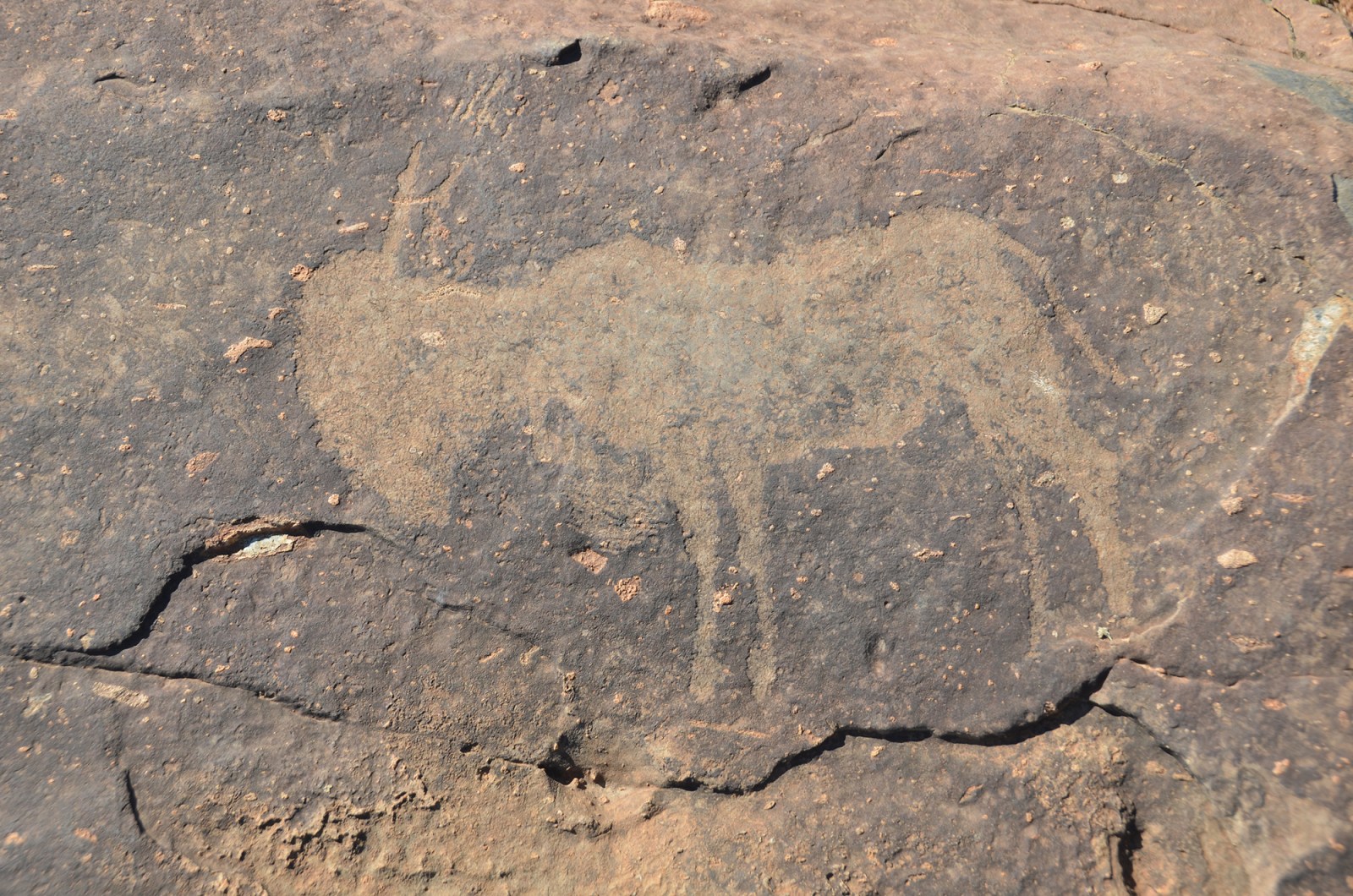 An engraved ‘altered' Eland was one of the animals left by San, on a granophyre dyke, that is located in the Vredefort Dome, in the Free State. (Photo: Supplied by the National Museum Bloemfontein)

Why did early hunter-gatherers choose an unusual formation of rocks as the place where they would spend time chiselling out images of animals which, back then, most likely dotted the surrounding landscape?

From space, the rocks appear to slither across the veld like a giant snake, and that might hold the key to the mystery of why these boulders were chosen for a special purpose a long time ago.

Etched across these rocks are engravings of animals. There is a hippo, black rhino, Eland and mythical beasts. Researchers are still trying to understand their purpose.

The world first learnt about this location when the rock art was revealed in 2019, with pictures of the engravings appearing in the international press. There is still much to learn about the site.

This ancient art is located near the hills that ring the Vredefort dome – the spot where a meteorite smashed into the earth two billion years ago. Just behind those hills, the Vaal River meanders through this corner of the northern Free State.

It is the river that perhaps provides clues as to why the San made these engravings.

“In these engravings you see large animals, and there will be a reason each of these animals are there,” says Shiona Moodley, head of the rock art department at the National Museum in Bloemfontein.

The proximity to the Vaal suggests the area was a place where hunter-gatherers would perform rituals to ensure the return of the rains.

“It does seem that a lot of the images of big animals, like hippos, rhinos and that sort of thing, do relate to rain and rain-making practices,” explains Prof David Pearce, director of Wits University’s Rock Art Research Institute. He says little research has been done on engravings, in comparison to painted rock art.

These “rain animals”, according to San folklore, are usually fat, short-tempered, bovine-like creatures.

“The San believe they can enter a trance and find the rain animal and lure it out of its water hole… then they would slice its throat and the blood will fall as rain,” Moodley explains. She has yet to write an academic paper about this particular site and is reluctant to speculate too much about the purpose of the engravings.

It was during a field study led by geologists from the University of the Free State that Moodley was called on to examine the site, which lies on private land.

Apart from the purpose of the art, another mystery is its age.

Unlike San paintings, these engravings are difficult to date. There is no organic material such as paint pigments left on the rock that can be analysed and dated through the use of Carbon 14 radioisotopes.

What researchers find unique about the site is that the art is found along 700 metres of a granophyre dyke, a geological formation that extends for about nine kilometres.

Known as the “rain snake” dyke, it was believed to have been formed by a molten sheet of rock that erupted when the Vredefort meteorite smashed into the earth.

Looking at it on Google Earth, the dyke resembles a large snake. Since a snake is also considered a “rain animal”, it might have been why these hunter-gatherers decided to use the line of black rocks as their canvas.

“This is probably the only dyke in the world, or at least South Africa, that we know of, that has rock art on it,” says Moodley.

There are examples of rock engravings across South Africa, with one of the best known sites being Wildebeest Kuil near Kimberley in Northern Cape province. Here, archaeologists have found 400 engravings of large animals including hippo, rhino and elephant.

And while not much is known about the engravings, what is interesting is that there are signs that people from that time interacted with the art.

“With the engravings, people seem to do things to them. People come back to them at different points and cut them. You often see lines cut across them [the animals], often the rib cages of bigger animals,” says Pearce.

“You get patches on rocks where people have just been hammering them. We think with engravings there is more of an auditory component to it.”

These engravings could have been part of rituals that involved dance, believes Pearce.

“A lot of engraved sites are what you call Gong rocks. If you get the right sort of rock, and it is balanced on another rock in a particular sort of way, you can bang it and it rings like a bell. And with a lot of these you can see marks where they have been bashed.”

The hope is that further research might one day provide a better understanding of why these early people chose such an unusual rock formation to spend time chiselling out images of wild animals.

“This is what is both frustrating and really exciting about rock art in this country… there is just so much out there. The problem is that there are just not enough hands,” says Pearce. DM