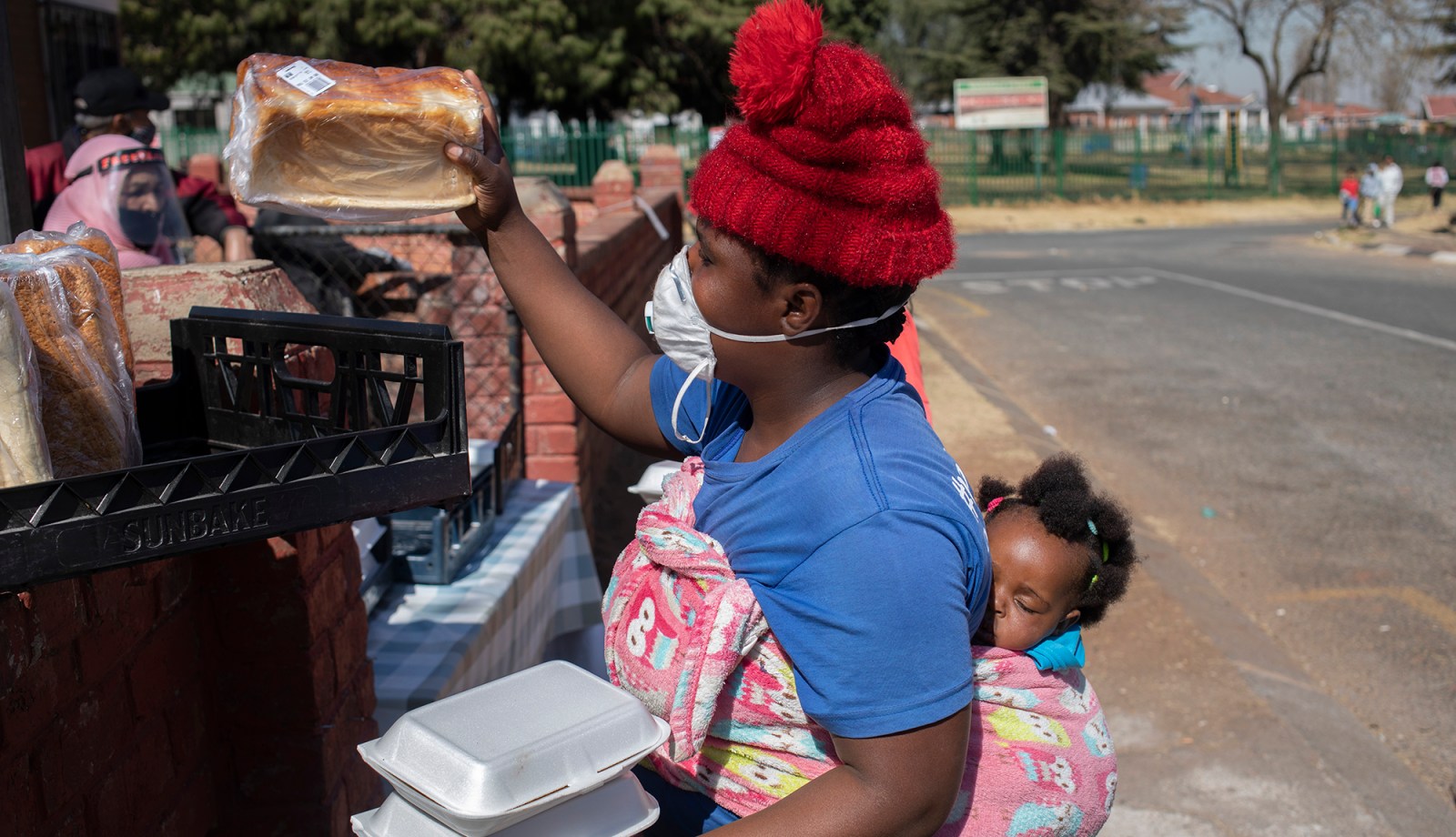 Women receive bread at a food handout during Eid al Adha at the ‘Hunger Has No Religion’ feeding scheme, in Johannesburg on 1 August 2020. (Photo: EPA-EFE / Kim Ludbrook)

The lack of job security for informal workers raises their risk of food insecurity. Out of 180 informal workers surveyed in Durban, more than 80% reported that adults and children in their households suffered from hunger during lockdown.

The world’s billionaires increased their wealth during the Covid-19 pandemic, but for people in lower income brackets, with minimal savings to cushion themselves, the past year has been defined by compounding tragedies and a severe decrease in quality of life. This article explores two major issues the pandemic has brought to the foreground in South Africa and beyond: food insecurity and the insecurity of informal work.

Food insecurity is rife in South Africa, although this cannot be attributed to a lack of edible produce, but rather a lack of access to it. Enough food is being produced to feed the entire country, yet 26% of the population experiences hunger regularly. Furthermore, 30.1% of the population is unemployed. Job losses and decline in income resulting from the nationwide lockdown increased the number of adults and children suffering from hunger and malnutrition.

Although they provide essential goods and services to the majority of South Africans, informal workers are one of the most marginalised and vulnerable groups in the country. They are not afforded any worker protections, their workspaces (often situated in public space) are poorly resourced and maintained, and they are regularly subjected to contempt and harassment. They are among the groups most negatively affected by the pandemic.

The lack of security they face in their line of work heightens the likelihood of food insecurity. Research by Durban NGO Asiye eTafuleni, in collaboration with Women in Informal Employment: Globalizing and Organizing, in Warwick Junction (Durban’s largest public transport and informal trading hub) shows that of 180 informal workers surveyed, more than 80% reported that adults and children in their households experienced hunger during the hard lockdown.

In July 2020, more than two months after the lockdown restrictions were lifted, informal workers were still under huge economic strain. The income of 72% of those surveyed had not returned to pre-lockdown levels. Many street vendors were earning less than half of their pre-lockdown income.

Another round of interviews by Asiye eTafuleni in its own capacity, in March 2021, showed the financial situation of informal workers in Warwick Junction was still dire. For example, a bead seller who could make R2,500 a week in the pre-pandemic world was surviving and supporting her family solely with childcare grants for her three children. These add up to less than R2,500 a month.

Only 39% of the surveyed informal workers received cash aid from the government. The reasons for this range from a lack of documentation and lack of access to digital services, to being unaware that there were relief measures available. Even for those who did receive the Covid-19 Social Relief of Distress Grant, R350 is gravely inadequate to meet their needs.

Aside from food relief received by 38% of the workers, other forms of municipal help have been almost non-existent. Although more than 90% of street vendors reported that they were wearing a mask when they returned to work, 70% had bought their own and the rest used masks donated by a charity. Forced to choose between spending hard-to-come-by cash on food or on personal protective equipment, it’s not difficult to imagine what most people would do. As an inner-city informal recycler said: “The money I would use to buy a mask I need it to buy bread.” Instead, she washed and reused masks she found on the street.

Furthermore, household and care work have increased during the pandemic, particularly for women. Before Covid-19 there was already a limited number of childcare facilities that were affordable and accessible to informal workers. Now, since many facilities have closed owing to a drop in their income, even more informally working mothers have had to send their children to their rural homesteads, leave them in the care of their (sometimes very young) siblings or take them to work.

These problems are shared by informal workers the world over, and with two billion people in this sector, their plight warrants attention.

Covid-19 is going to be with us for a long time, and due to our continued destruction of the natural world to sustain excessive consumption, other, possibly worse, pandemics seem inevitable. We need to put systems in place that make future shocks less catastrophic. To achieve this we need to ensure our food systems and vulnerable communities are better equipped to deal with such shocks.

The work by NGOs that have sprung up to serve the thousands of people who are suddenly jobless and starving, is admirable in the strongest sense — but it is a short-term solution to a long-term problem. A person’s ability to go to bed with a full stomach should not depend on how generous their fellow citizens are able or willing to be on a particular day. An informal worker’s ability to earn an income should not be so fragile that it can disappear overnight.

The only way to achieve resilience is through a concerted effort by our public institutions, in collaboration with civil society, to create sustainable food systems which would create minimal waste, preserve surrounding natural ecosystems as much as possible, build up inclusive local industries and ensure that nutrient-dense foods are easily accessible and affordable to all.

Fresh fruit and vegetables should be subsidised and supermarkets should be prevented from taking over from small-scale or informal traders. A sustainable economic system would ensure that all workers, formal and informal, enjoy worker protections, are able to access relief measures during crises, and are treated as the valuable members of society that they are.

If we achieve these goals we’ll live in a much better world. DM

Sarah Heneck works at Asiye eTafuleni, an NGO that aims to dignify and enhance the lives of the informal traders who work in Durban’s largest informal trading hub (Warwick Junction) through urban design, urban education and urban advocacy. Her City Planning Master’s dissertation focused on the comparative contributions of formal and informal food retail to food security in a low-income area in Cape Town. She has completed internships in the City of Cape Town’s Environmental Management Department (in 2016) and the Sustainable Livelihoods Foundation (in 2018).