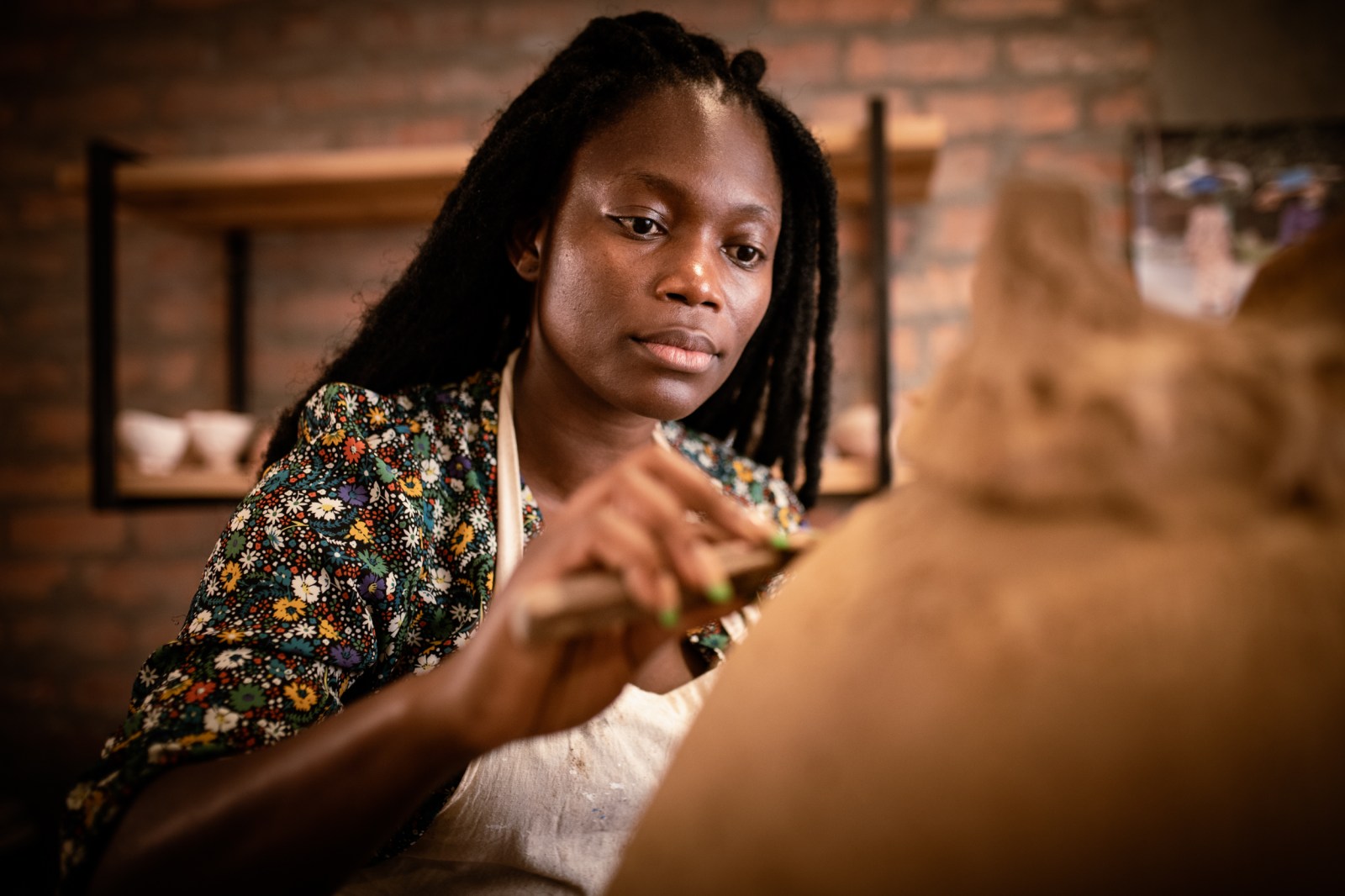 For her latest exhibition, ‘iLobola’, ceramic artist Zizipho Poswa takes a closer look at her culture, and explores the customary practice and evolution of ilobola, and why it was never simply about paying for a bride.

“I knew I wanted to tell a story about ilobola. Because I was clueless, I needed to know how the whole process works, especially because this is something that would be a part of my life; if I’m not the one for whom lobola will be paid, then it will be for my daughter, or if [I have a son] he is the one that will pay lobola. So, somewhere, somehow, I will be involved; It’s part of who I am, it’s my culture,” says ceramic artist and Imiso Ceramics co-founder Zizipho Poswa, referring to her latest body of work, on show from 25 March 2021 until 1 July 2021 at the Southern Guild gallery in Cape Town’s silo district at the V&A Waterfront.

The exhibition, which features 12 sculptures by the artist, is titled iLobola, after its subject matter, the customary practice where the bridegroom’s family makes a payment of an agreed-upon number of cows to the bride’s family; a practice which has at times come under criticism for being akin to buying a bride. That criticism is further encouraged by the fact that in contemporary practice, where most families do not keep cows, the exchange is now a financial one. The value of an individual cow is decided upon, and then the bride’s family will state how many cows they want to get to the final amount.

Followers of Poswa’s work might be familiar with the story of her cultural background, especially as it played a significant role in 2018’s Umthwalo, the seminal series that launched her transition from smaller functional pieces to large sculptural work. Prior to Umthwalo, those early functional ceramic pieces were largely informed by her background in textile and surface design, as well as the reality of establishing Imiso Ceramics, a business she founded with celebrated ceramic artist Andile Dyalvane and three other partners who left the business early on for various reasons. Dyalvane and Poswa were not in a position to hire new people to handle various parts of the business, so they decided that Dyalvane would focus on production while she focused on the business side, from accounting to retail and eventually to human resources as they grew the team: “I was working six days a week, only resting on Sundays. But I enjoyed it, and eventually things went well.”

Over the decade since the founding of the business in 2006, Imiso grew into one of the country’s most significant ceramic studios, and Dyalvane’s work gained critical acclaim. By 2016, the team had grown and Poswa could begin to dedicate more time to her creative journey.

In 2017,  Southern Guild, which represents Poswa and Dyalvane, invited her to create sculptural pieces for a group exhibition, Extraordinary. Says Poswa: “I needed to come up with something different. I needed to go and think.” That was December 2017, and like many who hail from the Eastern Cape, she left Cape Town, where she is based, to visit family for the holidays in the village of Centane. As is the case with many Xhosa families during the December season, there was a ceremony for her brother to welcome him back from initiation school. The home was a hive of heightened activity.

As she joined in the activities, such as going to fetch additional water for the event from the river and carrying it in a bucket balanced on her head, her attention was drawn to these tasks that women in rural villages took on, tasks that had been part of her life growing up there – fetching water, fetching firewood, planting, harvesting or maize milling: “I thought going home would just give me enough time and space to think, I didn’t think it was going to be the inspiration behind the work.”

That visit inspired the Umthwalo series. The isiXhosa word refers to the practice of carrying a load on one’s head. Depending on the context, it can also be directly translated to “a load” or “a burden”. In Poswa’s case the resulting sculptures were a reflection on the practice and a recognition of the strength and resilience of these women who carry loads, literally and metaphorically.

It is perhaps telling of the times that for Poswa – a Xhosa woman who grew up in the Eastern Cape between rural Centane and Dutywa, who is proud of her culture – when it came to one of the most ubiquitous practices in Xhosa culture, ilobola, she found herself “clueless”.

“There’s a lot that we don’t know. As much as I grew up in the rural areas, when I think about our customs… and admittedly some exclude women… there’s many things that I don’t know,” she says. “Obviously ilobola is paid for the bride. But I needed to know the full story, like why that is? And why cows?” Like many of us when in search of information, the first place she turned to was the internet. “There were so many images of cattle. I wanted to see more and I started searching for different types of cows on Pinterest.”

While the web would serve to inspire the visuals that would inform the shapes of the horns on the sculptures, to truly learn about the practice she needed to draw on the knowledge of those who were familiar with the process, starting with her mother for whom lobola had been paid (“But she got divorced and came back. So I asked her how the process worked”) to her accountant (“He is a traditional man and he’s been a [lobola] negotiator for the longest time. I was fortunate to have him”) to her uncle back home (“I called him and he was so happy and proud because I would be sharing stories of our culture on a global scale, because he knows the work sells internationally. With regards to certain things that he didn’t understand he would ask friends and neighbours to confirm, because as things evolve, some practices are not the same as they used to be”).

One of the key lessons from that process was that lobola is not a way to buy a wife, but rather a way to build relations “between the two families; to unite them. The groom, as the person who paid the lobola, can make demands on how this lobola should be spent, which is [partly] meant for your wedding ceremony. The lobola doesn’t belong to individual people per se here, it should help the couple start off their lives; get some basic things; for example, buying a new bed. The families knew that whatever they’ve received, they will be investing in the lives of their children… the couple. Now it’s more twisted, people don’t look at it like that, they look at it as though one is buying a [wife]. And there’s a bit of greed.”

The 12 sculptures that make up the exhibition are in “voluptuous shapes as a reference to women”, with varying designs of bronze horns. Each of them is named after different parts of the custom as well as the people involved, from Umyeni (the bridegroom) and Umakoti (the bride) to Oonozakuzaku (the negotiators).

“And the reason I’ve decided to focus on cattle for the sculptures, and not anything else, is because I wanted to shine a light on that authentic way of doing things and also to educate myself and others in the process,” Poswa explains. DM/ ML