Reflections of a Wayward Boy: A hat, a kayak and dreams of Dar 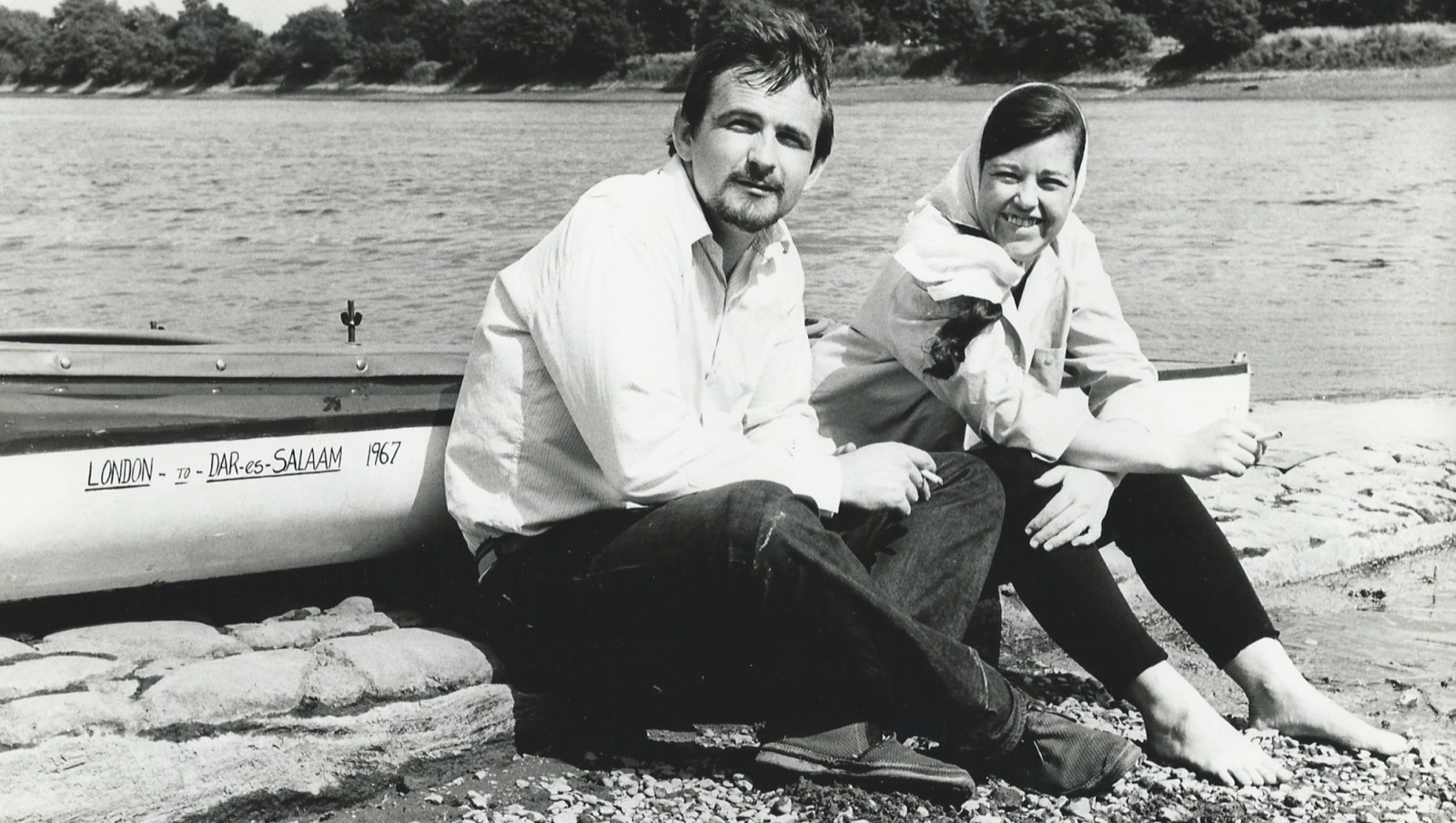 In the mid-1960s everything seemed possible — and change was in the air. So, driven by spontaneous activism rather than much planning or careful analysis, I leapt to support any political bandwagon that seemed to be heading in the right direction. It was a case of substituting activism for considered planning based on careful analysis. I would learn and adapt as I progressed. Which was why I decided it was perfectly logical to leave London in a kayak.

Easter 1967. As the massive Aldermaston peace march swept up Whitehall toward Trafalgar Square, the large ANC banner came into view and the BBC television reporter announced: “And here comes the South African contingent.”

It was the culmination of a three-day, near 90km march organised by the Campaign for Nuclear Disarmament and the anti-Vietnam war campaign. For me, it was one of the highlights of those politically frenetic years spent in London. The only annoyance at the time was the fact that, although the group had decided to support the march, only three ANC Youth League members turned up at Aldermaston: Pallo Jordan, Barbara Edmunds and I. Over the next two days and more we learnt some basic protest march lessons: don’t attach banners to heavy poles and cut holes in banners to stop them from turning into sails.

The three of us still recall how, finally, we were able to hand the banner over less than a kilometre from Whitehall. That was when the rest of the ANC Youth joined us from a pub across the road where they had been waiting. It was another lesson, but one that took some time to sink in.

Yet, for all the ideological debates that surfaced regularly among the ANC Youth, we were united in supporting that march. I felt vindicated for tending to dismiss ideological dissonance as mere quibbles. However, those political undercurrents were both fierce — and important.

Only much later did this become clear when I discovered that the disparate grouping in the ANC Youth who opposed the “Stalinist” Soviet Union and, therefore, the Communist Party (SACP), thought I must be an underground SACP member. It was an impression reinforced by the fact that I also worked as a sub-editor on the British Communist Party (CPGB) newspaper, the Daily Worker.

I got the job because of opposition to the war in Vietnam. A group of ANC members, including me, lived in the Fulham constituency of the Vietnam war-supporting foreign minister, Michael Stewart. And there was an election looming on 31 March 1966. The main electoral opposition to Stewart and the war was the CPGB candidate, Peter Robson. We supported him.

However, I was the only ANC member who became fully involved, ending up as Robson’s publicity agent. I was supremely confident that while Peter Robson wouldn’t win, he would knock a great dent in Stewart’s majority. I was in for a salutary lesson in the dangers of confusing wishful thinking with reality: Michael Stewart polled 20,080 votes, Peter Robson 256. The only consolation was that the fascist candidate polled just 126 votes.

I was devastated. But, as a result of my media efforts in Fulham, I was offered a nighttime job as a sub-editor on the Daily Worker. It was an opportunity I couldn’t miss: the chance to work with the award-winning newspaper designer and author Allen Hutt, then the chief sub-editor of the Daily Worker (he went on to redesign the famous The Times of London).

I would go to university during the day and work five nights a week on the newspaper. On days off and between lectures, there were talks about apartheid, delivered at schools and colleges, editing the first editions of the monthly Anti-Apartheid News, supporting the six-week-long 1966 seafarers strike, and even presenting the odd book review and talk on BBC radio.

Amid this, and among the millions of people in London, I almost literally bumped into Kent Warmington in a crush of commuters on the stairs of the Earls Court underground station. He was the Canadian Barbara and I had met in Morocco and who had promised to find my stolen bush hat. He had also challenged me to paddle a kayak from London to Tangier. “Have you got the hat?” he shouted excitedly. I hadn’t, but we were both in a hurry, so I gave him my address.

That night Kent regaled Barbara and me with tales of chasing the hat and the Canadian thief, Murphy, across Europe and into Afghanistan. He finally got the hat back and posted it to an address he remembered Barbara had given him. His memory was faulty. The hat never arrived; it had disappeared again, as did Kent, who returned to Canada.

But then, shortly before Barbara and I married in September 1966, a parcel arrived from Vancouver. Inside was a UN Afghan Aid rice bag containing my hat. At that stage, Barbara and I, having become Irish citizens, had already decided to get back to Africa as soon as I graduated.

Barbara proposed “taking our time” and cycling from London to Dar es Salaam. I felt, my hat having travelled as it had, and remembering the Canadian challenge, that we owed it to Kent to first paddle a kayak from London to Tangier. We could then decide how to move on to Dar. Barbara reluctantly agreed and we bought a 16ft (5m) glass fibre kayak which I fixed on hooks on the garden wall outside the door to our apartment.

And there the kayak spent most of its time. We were too busy to get out very often to practise and neither of us had any experience. Never mind, I assured Barbara, we’ll learn as we go. Take our time. Fix things up en route. But familiarity with the atlas we looked at from time to time to “plot our course” bred contempt for the journey to Tangier. Why not go all the way to Dar? I suggested. It was “only 7,000km”.

Barbara was sceptical, so I wrote to the Royal Marines, asking about the viability of such a journey. Almost certainly assuming I was an experienced sailor — probably a tough-as-nuts ex-marine — they assured me it was feasible and provided advice about the dangers of piracy along the Red Sea coast.

Here was my trump card: I pointed out to Barbara that no less an authority than the Royal Marines had said the trip — no longer a journey or a voyage, merely a “trip” — was feasible. Finally, she agreed. And, on the occasional free Sunday afternoon, we would also wheel the kayak down to the Thames and paddle, usually to the Dove pub, less than 1km downriver, for a couple of drinks and then back again.

But then one of those accidents of history struck: I put out a two-paragraph press release about our plans to travel to Dar in the hope that one or two newspapers would publish the news and be prepared later to buy articles I intended to send en route. It was a very long shot but, two days after I had sent it out, Francis Chichester arrived in Portsmouth, the first person to sail single-handed around the world. Anything to do with the sea, however crazy, was big news.

So when we were finally ready to leave, on 21 August 1967, our ill-prepared quiet send-off became a media circus. Not only did the ANC Youth emerge in force to give an impromptu song and dance performance, but there were TV cameras, reporters, neighbours and curious bystanders galore.

Although we had not yet worked out where best to stow everything, we had at least bought waterproof gear, lifejackets, a compass and most of the basic gear we thought we would need. This included what Barbara disdainfully referred to as my “office”: a portable typewriter, a ream of paper, carbon paper, camera and film. And we thought we gave a professional enough performance as we paddled away from the shore.

But it was a shambles, and I remember assuring Barbara: “Once we get away from this lot, we’ll pull off onto the bank and fix everything up.” That proved impossible: on every bridge there was at least one photographer and it was dark before we were able to rest, stranded on a rocky outcrop in the middle of the river, waiting for the tide to turn again in our favour.

And that was before Barbara discovered that the only reason I knew where we were was because I was relying on the only guide I had: a Michelin road map of the south of England. DM

Terry and Barbara Bell’s book, A Hat, a Kayak and Dreams of Dar is available at independent bookshops in Cape Town and from [email protected]